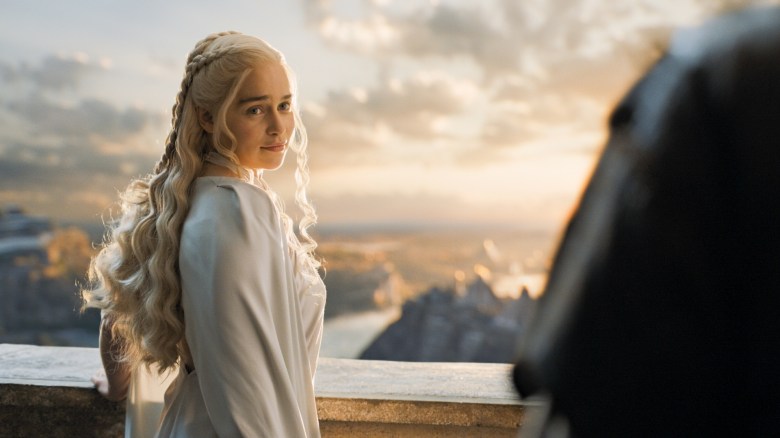 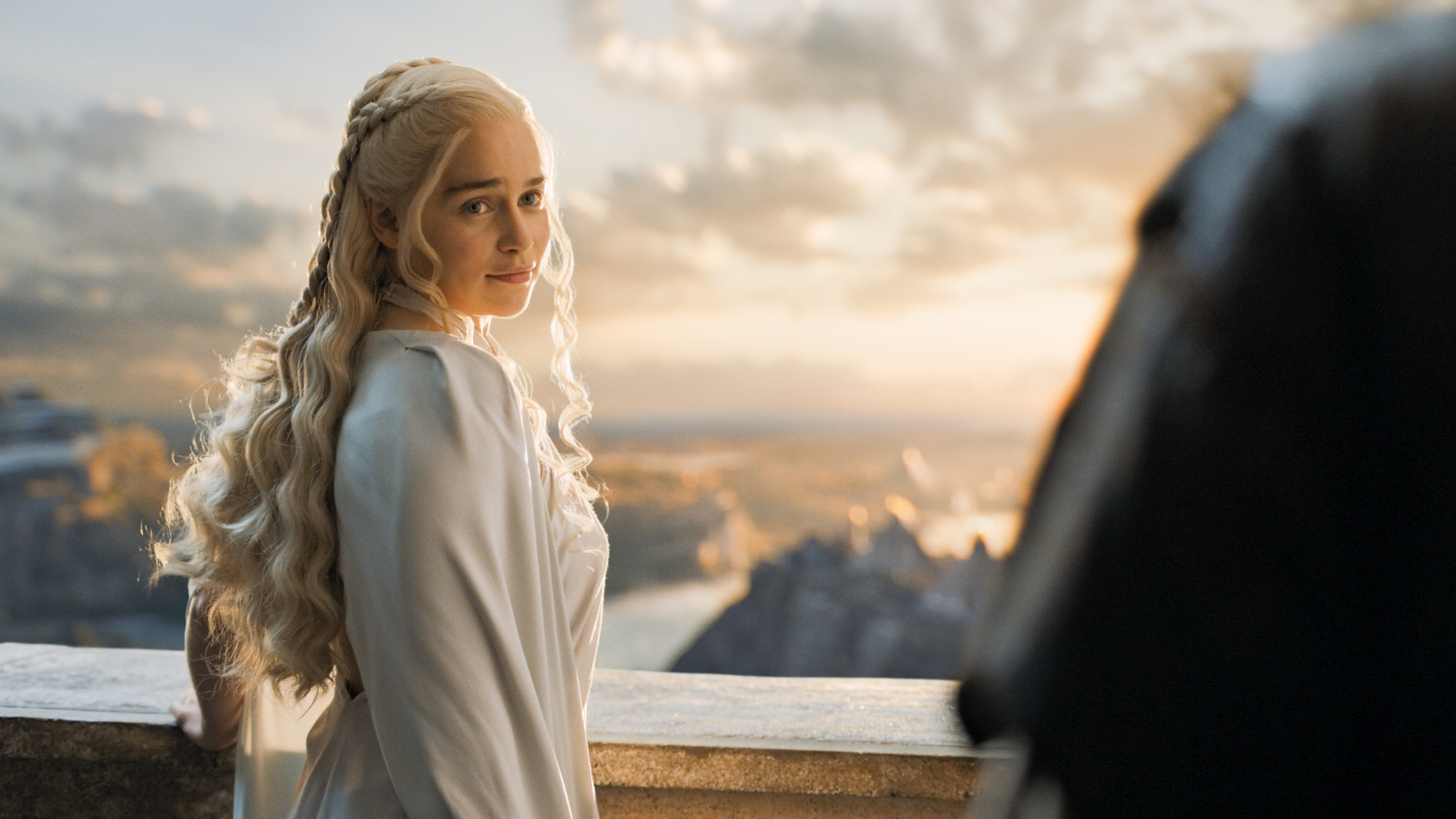 This week, “Game of Thrones” landed in new territory, with one of the hot button issues of this century — the religious persecution of LGBT people — manifesting as a story line in the medieval-inspired land of Westeros. Meanwhile in Meereen, Dany got some insight into her brother Rhaeger, Jaime and Bronn made it to Dorne and Jon Snow still knows nothing.

In King’s Landing, Cersei has managed to chop Tommen’s small counsil down to a select few, electing a new Master of Coin and Master of Whispers, and making the Jesus-like High Sparrow the new High Septon. She then reinstates the Faith Militant, the army of the Faith of the Seven which was disbanded during the Targaryen rule. But her reasoning for the renewed enforcement sounds ignorantly un-ironic. “The wicked are the wealthiest,” she said. “Shielded by gold and privilege.” She’s talking abut herself, right? Or she knows that she is, and is playing yet another game. The Faith Militant had Littlefinger’s brothel raided and Ser Loras arrested, rounding up those whose sexual proclivities go against the Faith. Even little Tommen is called an abomination in the streets; rumors of his biological father have spread. And though Cersei and Margaery seemed to be using Tommen in their little back and forth game, the Faith Militant is not exactly a group either of them should take for granted. Religious zealotry doesn’t always work out as planned, and Cersei’s decision could come back to haunt her later.

Most Poised to Take the Throne? 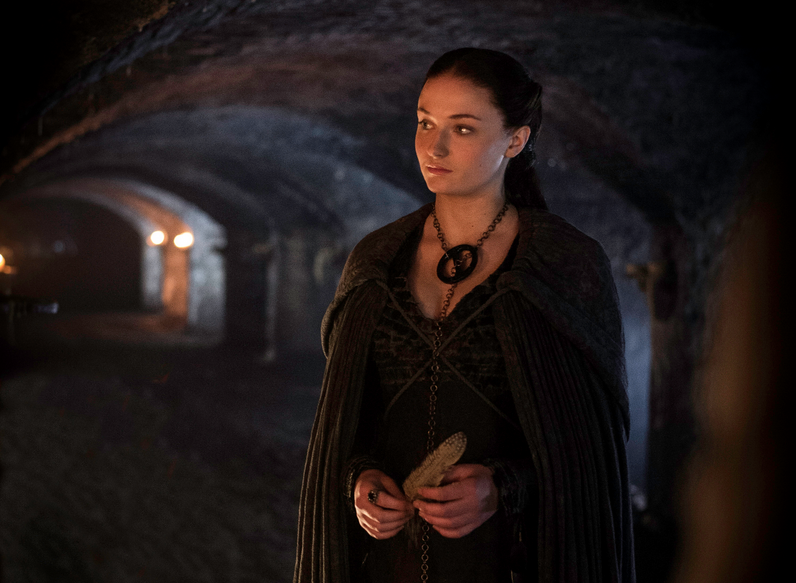 At this point in the game, Peter “Littlefinger” Baelish has obviously made plans for Sansa beyond her marriage to Ramsay, revealing them to her bit by bit. He found her in the crypt at Winterfell, lighting candles for her fallen relatives, specifically Lyanna Stark, her father’s sister, once engaged to Robert Baratheon. Littlefinger recited the story of Prince Rhaeger Targaryen’s championship tournament where, after winning, he passed his own wife, Elia Martell (Oberyn’s sister), in the stands and rewarded Lyanna with a crown of blue winter roses, naming her “Queen of Love and Beauty.” “How many thousands had to die because Rhaegar chose your aunt?” Littlefinger said, emphasizing his usual stance of staying out of things in favor of staying alive. We can blame Littlefinger all we want for the death of Ned Stark, for betraying him, or for his constant manipulation, but his choices to remain neutral in certain circumstances, betray others when necessary and buy his way out of jams are all keeping him very much alive when many are dropping like flies. He’s placing his bet on Stannis making his way south and taking Winterfell from the Boltons, and encourages Sansa to embrace her possible title as the Wardeness of the North.

Sansa is being groomed, and she’s taking to it incredibly well. During Season 2, after her father was beheaded, Sansa went into survival mode and acted how she needed to in order to survive, to the point where Tyrion even predicted that she’d outlive them all. Now, Sansa’s being a little more proactive. With the help of Littlefinger, she’s learning to use her growing strengths of manipulation, even on him” When Littlefinger suggested she, “Make the Bolton boy yours,” she feigned ignorance. Yet only moments later she got a little… flirtatious? The first time Littlefinger kissed her, she was taken aback. This time she closed her eyes and took it in, saying, “I expect I’ll be a married woman by the time you return.” Was that a “back-off” line or more of a “I’ll be more of a woman when you return” implication? For some reason, I trust in Littlefinger’s devotion to her. Sure, Sansa might be replacing his love for Catelyn, but that’s all the more reason he might be loyal. 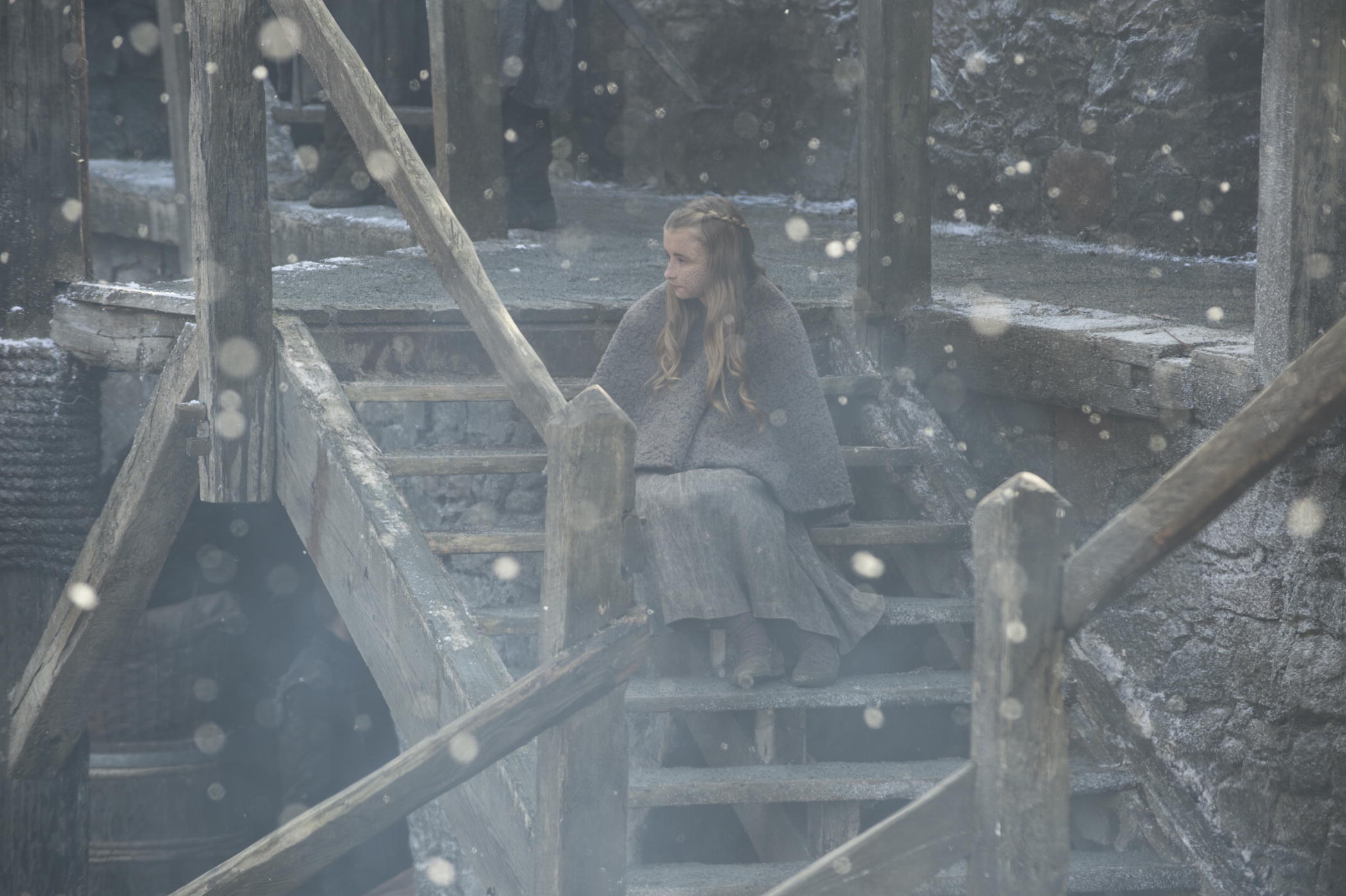 It’s kind of a pure miracle that Stannis showed his scarred daughter Shireen any kind of affection. When she asked her father if he was ashamed of her and Stannis didn’t immediately say no, things weren’t looking too promising. But Stannis is gonna do Stannis, and despite his lack of emotion, or how much his wife hates their only child, he did fight for Shireen’s life when she was infected with greyscale. “You are the Princess Shireen of House Baratheon,” he said. “And you are my daughter.” It’s cute and all, but these Shireen scenes feel a bit like filler when we’ve got a lot of ground to cover in the other story lines.

Around the corner, Melisandre was trying to make another kind of magic happen. She tried to convince Jon Snow to join them on their raid of Winterfell, but Jon reiterates his vows. “The Lord of Light made us male and female,” she said, “two parts of a whole.” (Sounds like homosexuality is forbidden in the religion of R’hllor, too.) But then, Melisandre straddled Jon, opened her cloak and tried to seduce him. Is she legitimately interested in Jon? Or is this one of her sneaky attempts to make another creepy killer shadow baby? Either way, the most magical moment was, after Jon rejected her, Melisandre threw back the only words she knew would hurt him — the words said to him only by Ygritte, so how could Melisandre know? “You know nothing, Jon Snow.”

It’s interesting that this episode chose to bring up both Lyanna Stark and Rhaegar Targaryen (and really, stop reading this section right now if you don’t want any kind of book hints), since, at this point, they’re thought by readers to be the actual parents of Jon Snow. Remember noble, loyal Ned Stark? Do we really think he’d have fathered a child outside of his marriage? The story Littlefinger relays to Sansa is the set up for Rhaegar’s kidnapping and raping of Lyanna, but what if that wasn’t exactly the case? What if Lyanna and Rhaegar were in love? What if Robert Baratheon started a rebellion against the Targaryens because their already married prince ran off with his future bride? In “A Game of Thrones,” the book, Ned recalls finding his sister after the war in a tower, lying in a bed of blood. “Promise me, Ned,” she said before dying. If Jon Snow is the son of Lyanna and Rhaeger, a Stark and a Targaryen, that would make him the personification of “A Song of Ice and Fire,” and destined for…well something. Stannis sees something in him. Melisandre does too. Is he the true second coming of Azor Ahai? 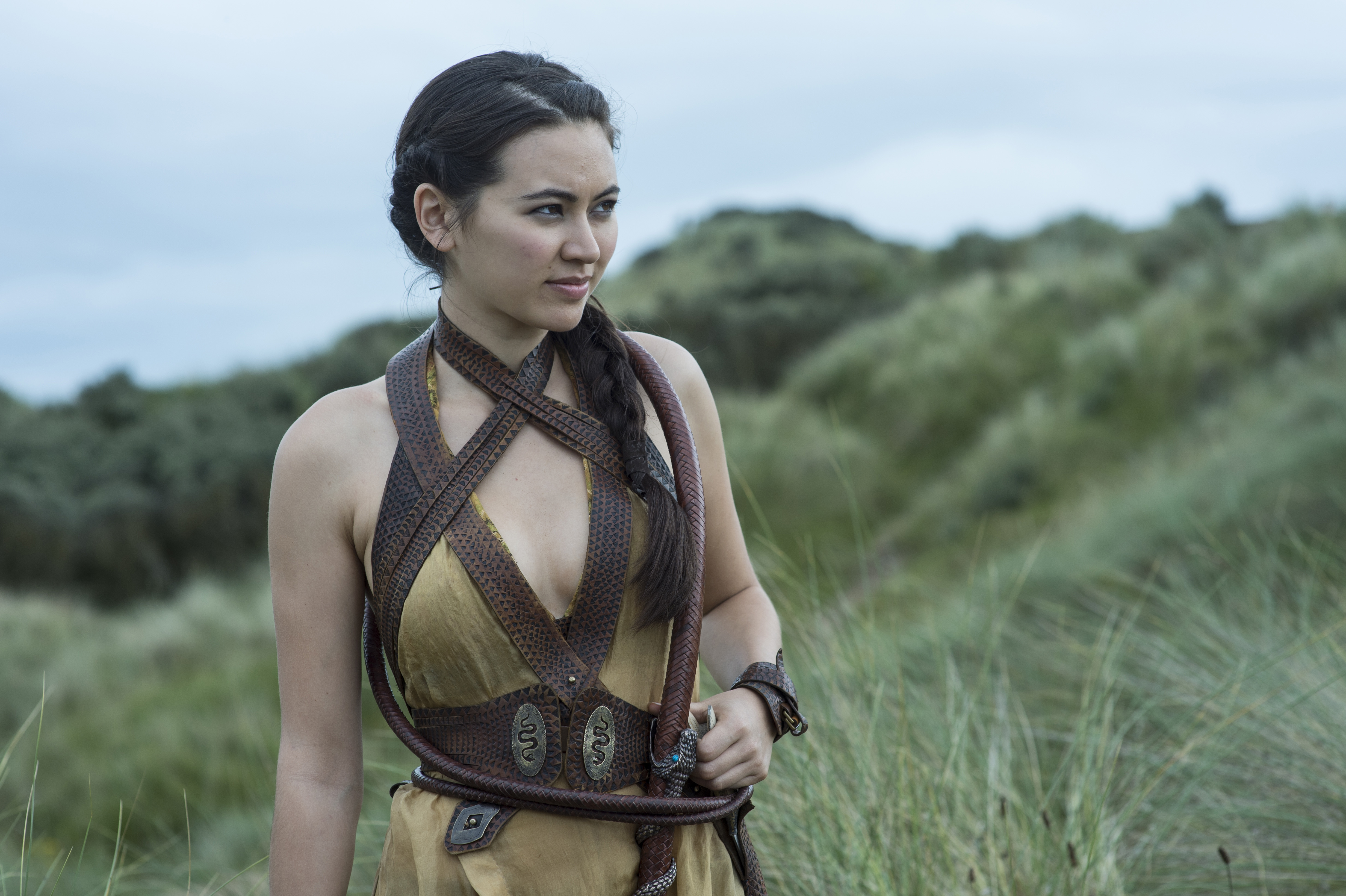 Episode 4 finally introduced The Sand Snakes, Oberyn Martell’s deadly daughters down in Dorne. “Game of Thrones” is capable of some truly beautifully captured scenes, and the shot of Ellaria Sand riding her horse along the beach was another stunning sequence. It was a bit disappointing then, that the Sand Snakes felt a bit like caricatures. Their conversation seemed stiff and their attitudes presentational and unnatural. Did Obara really need to tell her own sisters the story of when Oberyn came to claim her? Did Nymeria show off her whip skills because she was just practicing or because the viewer needed to be shown? These are some truly powerful women, and hopefully as their revenge plot against the Lannisters progresses they’ll develop as characters a bit more. It’s excellent to have more intriguing women on this show, and their strength is evident. But with some better dialogue and less stereotypical woman-warrior personas, they could really be great.

Who’s the God of Tits and Wine?

Since we’ve unapologetically been denied the entertaining combo of Tyrion and Varys, something had to fill the void. The Dorne-bound duo of Jaime and Bronn is Season 5’s new odd couple, whose snarky banter and witty retorts filled the silences along their long journey south. And Bronn is the clear MVP of the two: he’s not an idiot; he knows Myrcella isn’t Jaime’s “niece” and he subtly kept trying to get Jaime to admit as much but with no luck. Jaime’s seemingly constant anxiety is countered by Bronn’s perpetual calm. When they discussed how they’d each like to die, Bronn’s choice is surprisingly peaceful — in his own home, drinking his own wine, surrounded by family. “I’ve had an exciting life,” he said. “I want my death to be boring.” When they arrived on land and were found by Dornish guards, Bronn takes the brunt of the work, since Jaime’s missing limb has rendered him utterly useless. And when Jaime’s golden hand came between him and his attacker’s sword, Jaime chalked it up to luck. “You had a wonderful teacher,” Bronn insisted. If it were up to us, Bronn would get that boring death he so desires.

Wit of the Week 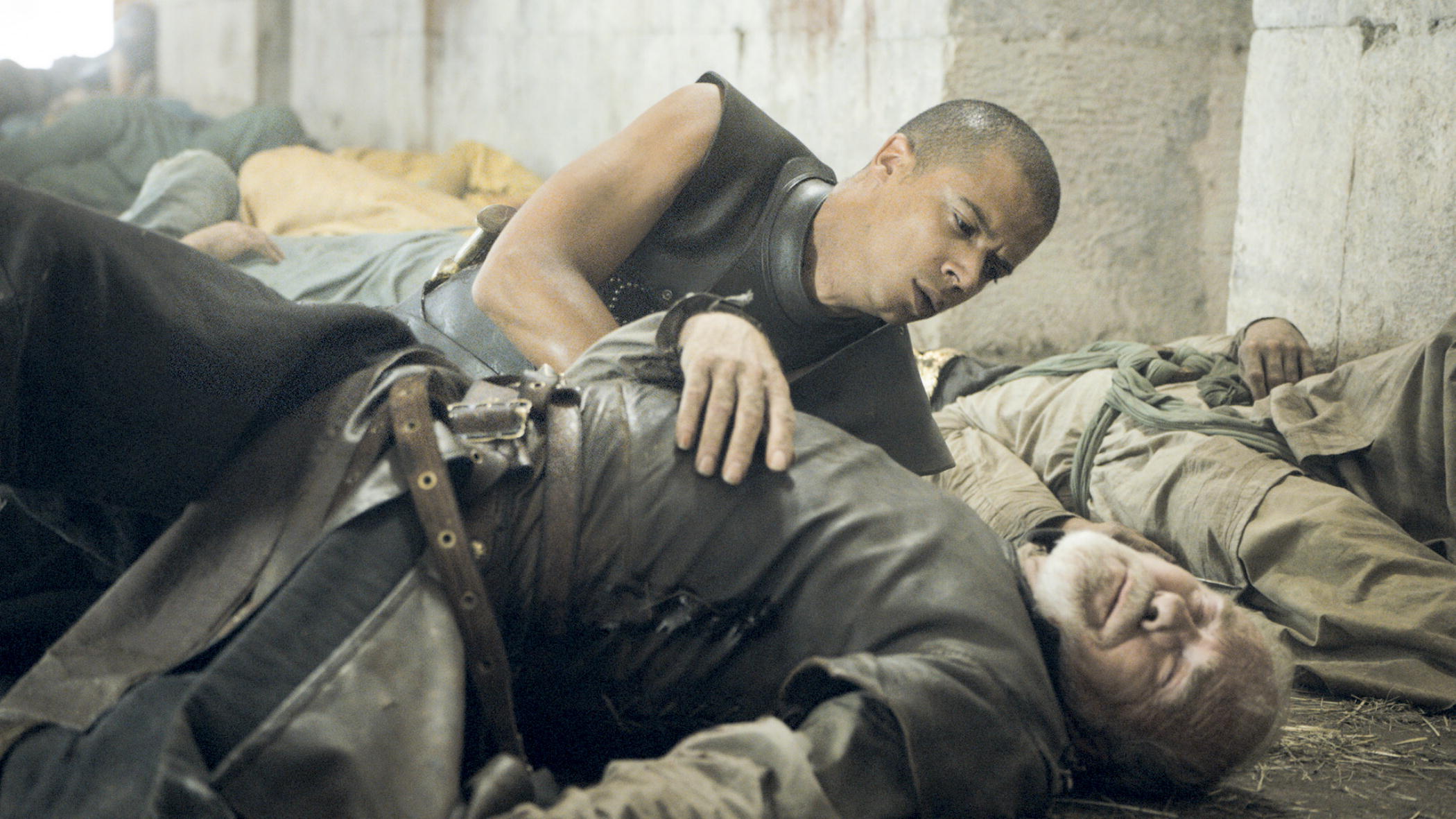 Isn’t it some sort of television storytelling rule that, whenever a character has a heartfelt, emotional scene, they’re bound to bite it by the end of the episode? When Ser Barristan Selmy began telling Daenerys about her eldest brother’s affection for singing in public, it was charming if a little out of place. When he decided to go singing in the streets himself, that’s when worry kicked in. The Sons of the Harpy went on another rampage through the streets of Meereen, killing Unsullied and spreading general havoc in rebellion against Dany’s rule.

It’s interesting to watch the Sons fight the Unsullied. As Daario had previously pointed out, the Unsullied are a bit too formal in their training; they’re a bit like the British Red Coats, lining up in orderly fashion to fight the much swifter, much more adept Native Americans in “Last of the Mohicans.”

When Selmy heard the ruckus, he headed in the direction of the fight, and that’s when my heart dropped and I knew we were going to get one of the aforementioned deaths of the season. Despite being advanced in his years, Selmy was still a fantastic fighter and, unlike Bronn’s fantasy future, Selmy got to show off his skills in an epic final fight scene, which was artistically confined to a dark alley. Unexpected, though, was that the fight might have also taken out Grey Worm; one of the characters we did not want to see go. He didn’t get any sort of sappy send-off or closure with Missandei, so it’s possible that Grey Worm might come out of this one alive, but Season 5 definitely has its first main cast casualty in the honorable Ser Barristan.

George R.R. Martin has never shied away from killing off his characters, even characters that had become fan favorites. But his insistence that HBO was going to get even more brutal has begun to come true. With the death of Selmy and potentially Grey Worm, not only does Daenerys’ situation become a bit more dire, but in all honesty the cast becomes more manageable. Let’s do the math here: Episode 4 might have taken out two characters, but it also introduced three new ones. We get it. It’s much easier for a series of novels to keep track of 53,000 characters and still have readers care about them. It’s much harder to do that in television. You don’t want viewers to start referring to characters, as my esteemed colleague does, as “that one guy with the sword.” So with every new season that introduces new ones, some have to be culled. It’s going to be sad, even if it’s not one of your favorites. But hey, if there’s any one person standing at the end — or sitting, rather, on the Iron Throne, they’ll probably be there all alone.