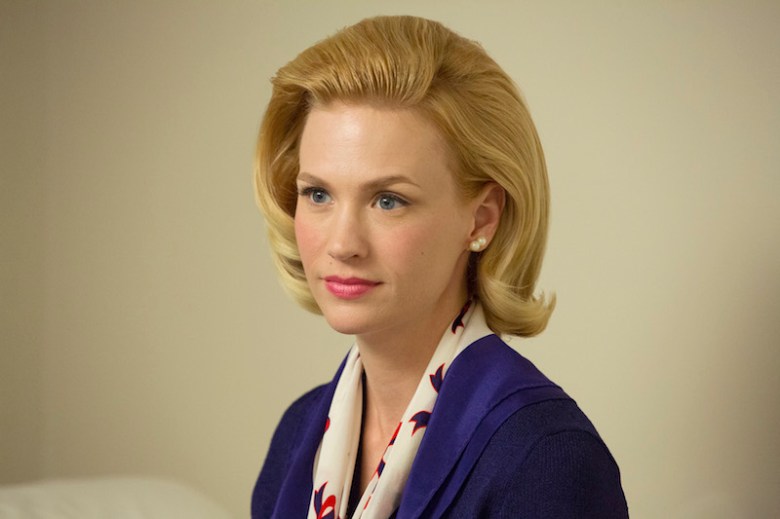 Don either prevented someone from making the same mistakes he did — mistakes he’s still haunted by in his dreams and paying for with unfounded suspicions — or he’s given grant money to a budding criminal enterprise. Andy may have reminded Don of himself at a young age, scraping by for every dollar in order to make his fortune and flee his home, but our protagonist’s crisis is leading him to unhealthy projection. None of what happened was about Andy (okay, maybe getting the money back). It was about Don moving on from his past.

But can he actually do that after what’s happened? The people he finally learned to trust with his real self immediately turned on him. His old army brethren broke into his hotel room, accused him of stealing charity money and then beat him with a phone book. Don’s lesson learned from all this is that he can’t go home again (Jerry and Floyd represent his own haunting past, now lost), but he can save himself. Whether this means Don will be coming out as a Dick in the season finale remains to be seen. “The Milk and Honey Route” presented a man ready to admit his true identity, but also a man who knows what people will think of him if he does. The Don we see today is both Dick and Don, with enough life experience culled from both to be his own man and he knows it. For weeks, many have been asking, “What will he decide: Dick or Don?” After Episode 13, he may not have to choose. 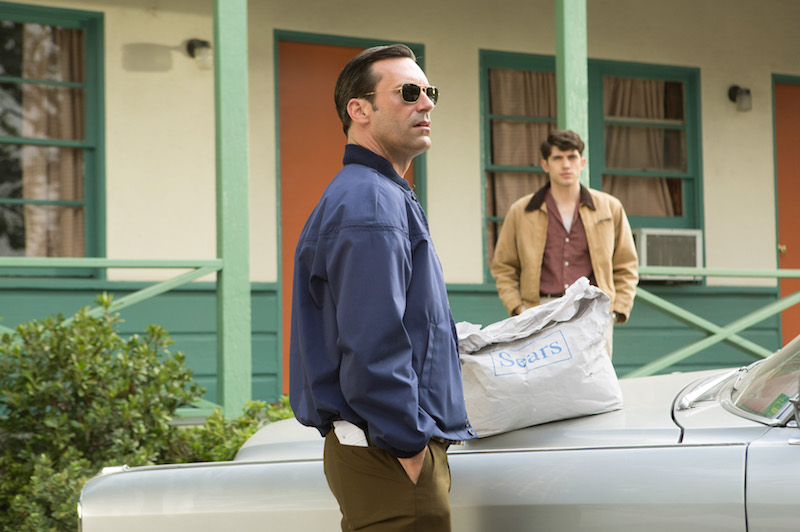 Did you see that smile? I’ve never seen Don smile like that in eight years of watching “Mad Men.” I don’t think I’ve seen Jon Hamm smile like that in eight years of knowing who Jon Hamm is, and he’s been in more comedies than I can count by now. Don shed his demons this week, confessing his sins to the only men who could understand. Sure, they may have turned on him, but it was for the wrong reasons. Don knows that, so Don is doing just fine. It’s what’s next that’s always plagued him, and we’ll soon find out if now is good enough. 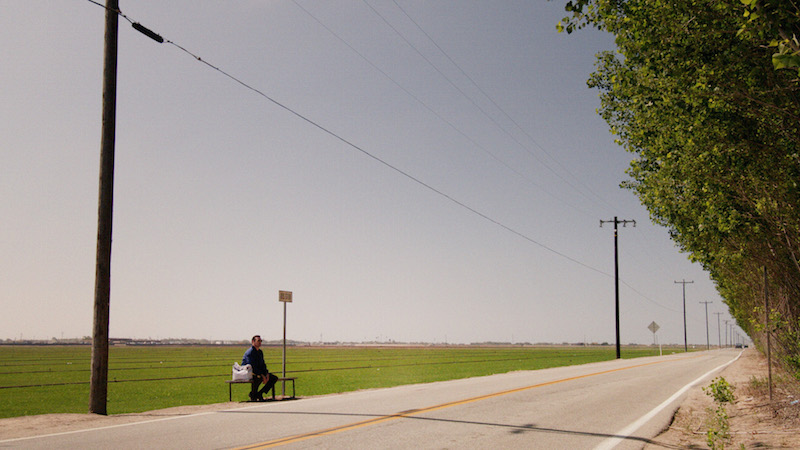 Don is done with advertising. In what was a stronger implication than was read last week, Don’s departure from McCann Erickson was a permanent one. He’s forfeited his partnership and is now free to be “on the road” for as long as he pleases. That being said, tonight’s title indicates an arrival in paradise soon (and for viewers, at least, “soon” now means next week, as the series finale finally arrives). Taken from the Bible passage when God speaks to Moses through a burning bush (telling him to take the Israelites to the “land of milk and honey”), Episode 13’s title implies this was Don’s passageway to a land rich with opportunities. He’s been wandering the desert long enough (or trapped in Dante’s eighth — fraud — and ninth — treachery — circles of hell, if you’re still keen on interpreting that symbolism). Now it’s time to escape, and we couldn’t be happier to see where.

We’ve known for a long time now the place itself, to Don, is California, but what’s important is that he’s shed any distraction in his quest for happiness. Work is the excuse he’s been using all season to avoid dealing with his inner demons. Now they’re out, and all that’s left is finding his honey. Could it be Megan? Could it be a new woman, a new family or pure, blissful freedom? It’s hard to tell right now, but one thing seems likely: Don is going to be okay.

Employee of the Week: Pete Campbell 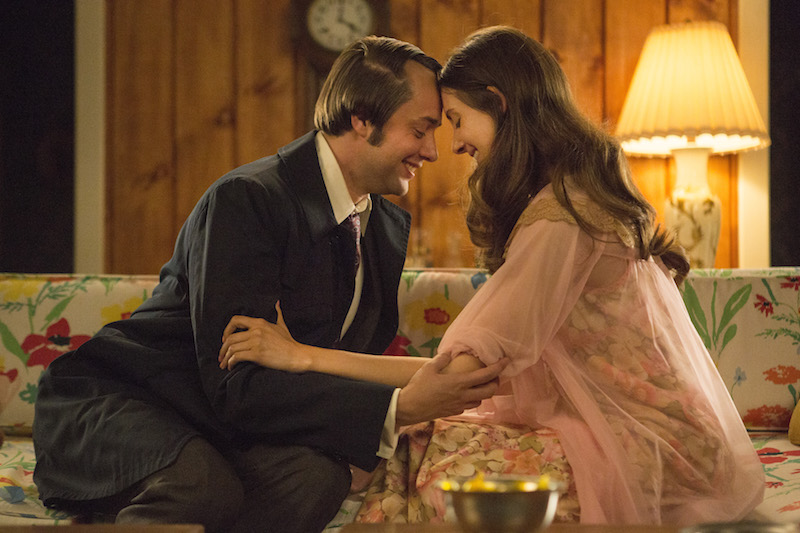 So that’s how Matthew Weiner writes romance. “I said it to you 10 years ago, and I’ll say it again. I do.” Whether that brought about an eye roll or a teardrop is dependent on the viewer, but I think the moment was at least meant to be sincere. Pete’s recommitment to Trudy (Alison Brie) will likely be seen through various lens of cynicism over the next few weeks (if not years), but Pete’s journey from most-hated character in Season 1 to fan favorite by Season 7 was topped off with an honest proposal to Trudy. Matthew Weiner has been setting this up for some time now, carefully colliding these two characters over the course of Season 7b to illustrate their chemistry and similarities. It worked. They really are the perfect couple, warts and all.

Just look to Trudy’s razor sharp remarks to her “friend” after Pete fixed Tammy’s bee sting with some Colgate for evidence of her Pete-like mentality. She’s fiercely protective of her status, just like her soon-to-be husband. Trudy and Pete seemed like the couple that should and would fall apart at the beginning, but bringing them back together was a surprisingly welcome treat. I’m not arguing their second marriage will last any longer than their first. But Pete’s “not so dumb anymore.” Trudy isn’t either. Maybe that’s enough for the “something new” both are “entitled” to — not to mention little Tammy.

With all due respect to the too often disrespected MidWest states, Wichita is absolutely not beautiful. Pete’s statement to Trudy as a means to push her over the top with his proposal was a beautiful sentiment (and one we would’ve thought Pete incapable of delivering with such purity a year ago), but I laughed out loud when he praised the lifestyle of Wichita over her native New York. Oh, Pete. Anywhere would look beautiful to you after that job offer. You better hope Trudy feels the same way. 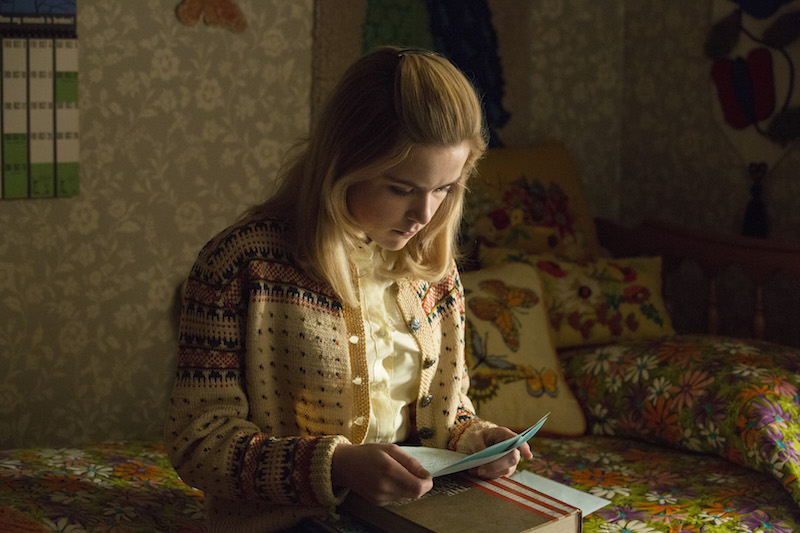 “Sally, I always worried about you because you marched to the beat of your own drum, but now i know that’s good.
I know your life will be an adventure. I love you. Mom.”

Anyone waiting for tragedy in this last season of “Mad Men” was given the biggest dose yet with Betty’s devastating diagnosis. Struck with lung cancer just as she was getting her life in order, Mrs. Francis made her final moments count in a way both unexpected and entirely authentic. Her warm, thought-out and blunt speech to Sally left her daughter on just the right note after years of being on the wrong one. Just as many mothers and daughters fight through the child’s adolescent outcries, Betty and Sally had some truly awful moments together. Only a few weeks ago, Betty was playfully seducing Sally’s long-time friend Glen (though, thankfully, she didn’t go through with it when Glen presented the opportunity).

In the penultimate episode of “Mad Men,” we got to see both women grow up. Betty did so by bravely facing her fate. The courage presented by a mother that protective of her children was touching enough, but her trust of Sally to become the family matriarch was moving on a whole other level (the shot of Sally sitting with her brothers was a nice touch). Betty knew Henry wasn’t strong enough to do what she needed, and Sally saw it first hand when her stepfather crumpled like a baby when breaking the bad news to her. Typically, it would be a time for an adult to comfort a confused and lost child. But Henry was the lost one (“Jesus, what am I gonna do?” he said), and Sally found herself just in time to help her mother. Don may not be as around for either of them as he’d once promised, but these two found more strength within themselves than he could have ever provided.

Morning After Thoughts:
– Henry is a scary guy to find in your room, unannounced.

– I have no idea what symbolism to draw from Don reading “The Godfather,” a particularly troubling annoyance given “The Godfather” is my favorite film. Perhaps Don’s journey is like Michael’s trip through Italy? Is he about to meet the woman of his dreams? Does he miss his family? Wait. Is Sally Michael and Don is Vito? Oh man. Better re-watch both.

– “Who’s going to win the World Series this year? You are!” better not become a new phrase. As funny as Duck’s drunken exclamation was, I can’t take that kind of optimism as a Cubs fan.

– Could Betty’s cancer diagnosis earn January Jones her first Emmys nod since 2010? Could she win? Betty’s turnaround this season certainly gives her more of an edge than in years past.