Falling Out of Love with 'Entourage' 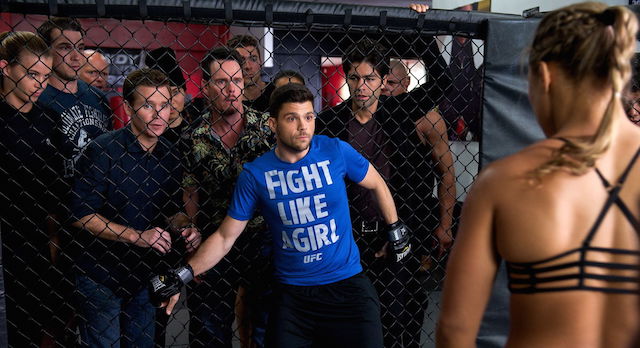 Let’s get this out of the way: the “Entourage” movie is
exactly as good as an episode of “Entourage.” If you somehow made it through
all eight seasons of the HBO original series, navigated the insultingly low
stakes of a series glorifying privileged male narcissism, accepted numerous
narrative dead ends, faceless T&A, and aggressively unfunny quips, and
embraced consequence- and conflict-free bro-ing out without a single criticism
or complaint, you’re going to fucking love the “Entourage” movie. If watching
thirty seconds of what I’ve just described sounds like an interminable
Hellscape with no possibility of escape, you’re going to hate the “Entourage”
movie with extreme prejudice.

Here’s what the “Entourage” movie, and by extension any
single episode of “Entourage,” means to me: I genuinely chuckle with it a
handful of times (biggest chuckle for me was the size of Drama’s flask when he
found out he may be cut from Vince’s directorial debut),
I laugh at it about five times as often, and I spend the rest of the time
either bored, appalled, confused, or despairingly frustrated, so much so that I
ask myself difficult questions like, “What is happening in my life that I would
willfully put myself through this monotonous parade of nonsense, like E’s
scummy relationship problems, or Turtle’s weird pursuit of a MMA fighter, and whether
or not Vince’s DJ-infused “Jekyll and Hyde” passion project will finally
salvage Johnny Drama’s beshitted career?”

Yet this is “Entourage” in all its misguided glory. Though
it has occasionally flirted with self-seriousness and pretension and “high
stakes” — all with utterly disastrous results, I might add — it has never
pretended to be anything more than what it is. The fact that “Entourage” is a
bad movie is almost irrelevant at this point. The only way it could have been “good”
is if Doug Ellin and co. negated the series’ premise, hired different actors,
and embraced an entirely different worldview; in short, it would have to not be “Entourage.” I stopped taking the
movie seriously as a movie when the
first note of Jane’s Addiction “Superhero” came up over the soundtrack.

Though I’m loath to admit it, there was a point in my life
when I would have been excited for an “Entourage” movie without even the
slightest hint of irony. I started watching the show when I was 12 and, like
the evil Pusherman that I am, I hooked a few of my friends onto it as well. When
you’re that young, “Entourage” promises a few indispensable things: premium
cable nudity, cursing, seductive hedonism, and did I mention the premium cable
nudity? The “jokes” sounded clever and funny at that age, and Ari Gold’s antics
were, dare I say, cool. It makes some sense that I bought into “Entourage” because, if you think about it, it accurately projects a 12-year-old boy’s
ideal vision of adulthood: cool friends, cool things, and cool boobs all the
time without any questions asked.

What doesn’t make sense is how long I continued to watch
“Entourage” after I caught on to its shtick. It only took a couple more years
to realize all the flaws that were staring at you in the face. You finally hear
the racism, the homophobia, and the sustained misogyny buried in the foundation
of the series’ premise. You begin to notice just how aimless the series was on
both a micro and macro level. You start picking up on how nothing of consequence will happen across multiple episodes. You
realize just how much disbelief the series requires you to suspend in order to
accept remotely any plot development that occurs (the biggest hurdle being that Vincent Chase has the bare minimum of charisma and talent to be routinely
employed in Hollywood). You begin to recognize that Vince, E, Drama, and Turtle
are barely distinct characters at all (Ari stands out by default because he
yells loudest) and that their friendship feels perfunctory and forced. You
start yelling at your television set anytime anything happens on “Entourage” because nothing makes sense.

Yet, I kept watching “Entourage” long after I should have
done literally anything else. It was mostly for anesthetic comfort; say what
you will about the show, but it’s like bad pizza: you at least know what you’re getting every time. But it was also once you become hyper-aware of the series’ machinations, every
development starts to become very, very funny. After starring in a Martin
Scorsese adaptation of “The Great Gatsby,” Vincent Chase, while preparing for
his role in an Enzo Ferrari biopic, spends an entire season doing nothing but
having anonymous sex in the background of other people’s stories (this may not
be the whole truth, but it sure as hell felt like it). One subplot forced the
audience to imagine Chase as Johnny Ramone. Another required us to believe that
Johnny Drama’s new animated series “Johnny’s Bananas,” co-starring Andrew Dice
Clay, was going to be as good as “The Simpsons.” I could go on forever, but you
get the point.

Then, like all unhealthy relationships, the flaws, the
repetitiveness, and the cracks in the foundation all became too much bear. I
stopped watching “Entourage” with roughly five or six episodes left in the
series because I truly felt empty, like the aftermath of eating three bags of
candy. I genuinely didn’t even slightly care about the fate of Ari’s marriage
(spoiler alert: it’s fine) or whether Turtle’s tequila company takes off
(spoiler alert: it does). I just didn’t have it in me anymore to put in the 28
minutes even five more times to see what happens to the boys, mostly because I
know what happens: like always, they’re gonna be fine. And guess what? They
were.

As a result, watching the “Entourage” movie was a vaguely
strange experience, mostly because I saw what my pubescent self and my snarky
teenage self saw in the show. It’s shameless and brazen, absurd and illogical,
and mostly innocuous and irrelevant. By the end of the very first scene, after
hearing E, Turtle, and Drama spout exposition in the former of banter, I wrote
down in my notepad, “This is an episode of ‘Entourage.'” And for better or
mostly worse, it was. Oh yeah, it was.