This Week in Home Video: 'Chappie,' 'Run All Night,' and More 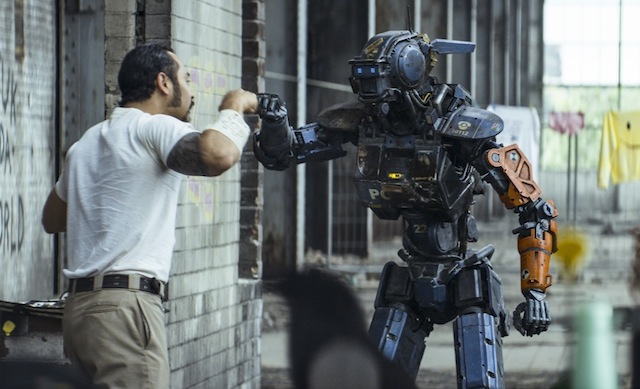 It’s a slow week for new Blu-Ray/DVD releases this week filled with quite a few duds and a couple of gems. First, we we start with Neill Blomkamp’s terrible film “Chappie,” which follows a very annoying childlike robot with artificial intelligence who learns humanity can be selfish from Dev Patel and Die Antwoord in a bombed out Johannesburg. (No, I’m not joking. It is a real movie.) Though Blomkamp has a very keen sense for military hardware and computer-generated destruction, he relies on phony lip service to Big Ideas, like how environment affects the development of consciousness and outlook, and repetitive “high concept” narratives that are all just smokescreens for what he really wants to do, which is to blow shit up. There’s nothing wrong with that at all, but when everything else around it is so empty, it’s hard to muster up the energy to care about anything that happens regardless of the size of the explosions.

Other releases this week include “Run All Night,” the third Liam Neeson thriller from Jaume Collet-Serra. Neeson plays Jimmy Conlon, a retired Irish mob enforcer who’s haunted by the sins of his past. After he kills the son of his boss and best friend Shawn Maguire (Ed Harris), Jimmy and his estranged son Mike (Joel Kinnaman) are forced to go on the run from Maguire’s toughs that control the city. Next we have “The Lazarus Effect” starring Mark Duplass and Olivia Wilde, a sci-fi horror film about a secret serum that brings the dead back to life. Finally, we have “Wild Tales,” an Argentine anthology film which was nominated for an Oscar for Best Foreign Language Film.

On the classic front, we have some exciting new Blu-Rays. First, we have two films from the acclaimed Japanese animation studio Studio Ghibli: the very popular coming-of-age film “Spirited Away,” directed by Hayao Miyazaki. After Chihiro (Rumi Hiiragi) accidentally enters the spirit world on her way to a new neighborhood, she’s forced to take a job working in a bathhouse in order to free herself and her parents, who have been transformed into pigs, so they can return to the human world. “Spirited Away” not only won an Oscar for Best Animated feature, it is also the highest-grossing film in Japanese history and has become a modern classic. The other Studio Ghibli film is “The Cat Returns,” directed by Hiroyuki Morita, about a girl named Haru (Chizuru Ikewaki) who can talk to cats and has to discover her true self in the Cat Kingdom. Next, we have Criterion’s new box set of films from Andre Gregory and Wallace Shawn : Louis Malle’s “My Dinner With Andre” and “Vanya on 42nd Street,” and Jonathan Demme’s “A Master Builder.” All three films explore the line between theater and film, as well as the act of creation. Finally, Kino’s new Blu-Ray is William Friedkin’s “The Boys in the Band,” one of the first major American films featuring an ensemble cast of gay characters.

A smoldering dumpster fire of second-hand elements from better movies, “Chappie” is the kind of fiasco that ends careers. It’s idiotic, incoherent and downright punishing to sit through – unless you’ve been hankering for an ultra-violent remake of “Short Circuit” in which Steve Guttenberg and Ally Sheedy are played by Die Antwoord. Read more.

“Run All Night” is one of the first solid action films of 2015 and one of Liam Neeson’s more impressive films as of late. Director Jaume Collet-Serra shoots the film with a unique edginess that translates into a well-rounded action picture with a little depth for good measures. “Run All Night” isn’t perfect, but it’s definitely effective and a great display of the talent both in front of and behind the camera. Read more.

Geld’s artful approach to horror is exhilarating and deeply disturbing. His dedication to character building forces us to engage with its heroes and their paranormal peril. From there, he masterfully builds tension by what he leaves out of frame, and a soundscape that teases a world laced with unknown possibilities of danger and terror. By no means is “The Lazarus Effect” a flashy horror flick. It’s better than that: It’s unique, artfully frightening and superbly chilling. Read more.

Each of the six stories here, which average about 20 minutes, is thoroughly enthralling, and all are united by a mordant black humor. Connected thematically in dealing with revenge and retribution, each segment sets up expectations that its successor ingeniously fulfills or surpasses. Read more.

This Article is related to: News and tagged Chappie, DVD / Blu-Ray, Run All Night, Spirited Away, The Lazarus Effect, Wild Tales, William Friedkin