Criticwire Classic of the Week: Billy Wilder's 'The Apartment' 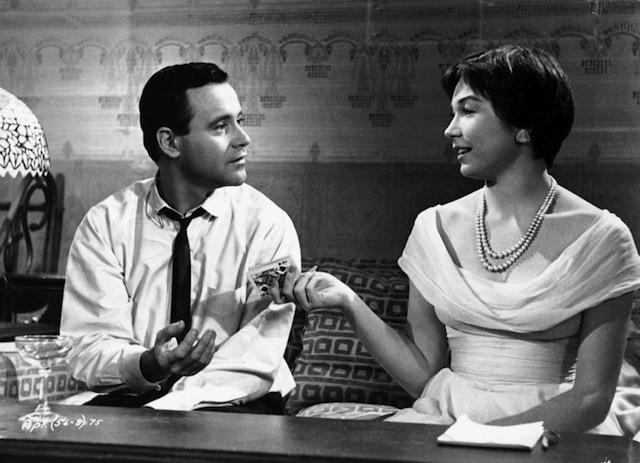 Billy Wilder’s Oscar-winning film “The Apartment” has been called “cynical” — cynical about people, corporate culture, relationships, and love. It’s a film where the heroes make choices that serve their self-interest and denigrate their integrity at the same time, and everyone else are basically morally compromised frauds. But “cynical” has never felt like the right word to describe “The Apartment.” Wilder’s film believes in love and romance, sweetness and sincerity, and even the goodness of neighbors, but it also understands that all of those qualities don’t come easy to people. They require determination and sacrifice, a willingness to do the right thing and extend a hand to people in need, even if you don’t get anything in return. Most people don’t want to put the effort into being a mensch (read: human being) because being a schnook is that much easier.

C.C. “Bud” Baxter (Jack Lemmon) is an insurance office drone working on the 19th floor of a high-rise building in New York. He lives in an apartment on the Upper West Side, just half a block away from Central Park, which he allows four corporate managers to use for their extramarital affairs. Bud hopes to curry their favor and to climb the corporate ladder, but though the managers blandly recommend him, they don’t respect him (they exclusively call him “Buddy Boy”) and they make it very clear that their kindness towards him begins and ends with his apartment. When Jeff D. Sheldrake (Fred MacMurray), the personnel director in charge of promotions, gets wind of Bud’s scheme, he insists on using the apartment as well. Little does Bud know that Sheldrake is using his apartment to get back in the good graces of Fran Kubelik (Shirley MacLaine), a delightful elevator operator for whom Bud carries a torch; little does Fran know that Bud’s promises to divorce his wife and change for the better are hollow and false.

Though “The Apartment” contains its fair share of melancholic moments, it’s mostly a dark comedy, filled with jokes about infidelity and suicide. There’s a witty ping-pong rhythm to the banter — “You mean you bring other girls up here?” “Certainly not. I’m a happily married man!” — that creates an infectious Lubitschian energy to the film which keeps up the film’s momentum. But even at the movie’s funniest, screenwriters Wilder and I.A.L. Diamond never shy away from the ugly realities of human behavior, such as the cruelty of a man stringing along a woman, the awful feeling of being spurned by someone you love, or the belief that death is the only way out of an emotional tailspin. Most importantly, “The Apartment” perfectly captures the casual dehumanization of modern corporate culture. It illustrates how easy it is for people to fall into a culture that cares more about their usefulness than their individual humanity, and how that culture can subtly infect your entire perspective, like making you believe that your worth is in the hands of other people.

Wilder often gets dinged by critics for his visual shortcomings, but he’s working at the top of his game here. Shot in widescreen black and white, “The Apartment” highlights both the grayness of New York during Christmas time and the loneliness of Wilder’s subjects. One of the best shots in the film, ripped straight from King Vidor’s “The Crowd,” is of Bud working in a room filled with parallel rows of desks; Wilder employs forced perspective to create the illusion that there’s a vanishing point that exists in the office, a point of no return that Bud desperately desires but doesn’t quite know why. There’s also a fluidity to the film’s action with characters moving in and out of frame with ballet-like grace, carrying with them a sense of grounded urgency to the film’s drama. It’s as if Wilder and co. take seriously the plight of those stuck in the rat race hoping to one day showcase their own sense of self.

But Lemon and MacLaine are the two beating hearts of the film, even when they’re making life difficult for themselves. They’re both clearly stuck in a rut, hoping that easy fixes and shortcuts will help dig them out of their respective holes, but knowing in their heart that it won’t be enough. It’s why scenes like Fran’s suicide attempt or Bud and Fran beginning their gin rummy game still contains quite a bit of poignancy: they’re actions rooted in a shared sense of self-loathing, a feeling that nothing will get better because it’s not in the cards for either of them. It’s when both Fran and Bud ask more of themselves that they start to get themselves out from under the messes they’ve made of their lives. “The Apartment” isn’t purely cynical; if anything it’s cynically heartwarming. It knows that there are no guarantees in life, but the least you can do is shut up and deal.

More thoughts from the web:

There is a melancholy gulf over the holidays between those who have someplace to go, and those who do not. “The Apartment” is so affecting partly because of that buried reason: It takes place on the shortest days of the year, when dusk falls swiftly and the streets are cold, when after the office party some people go home to their families and others go home to apartments where they haven’t even bothered to put up a tree. On Christmas Eve, more than any other night of the year, the lonely person feels robbed of something that was there in childhood and isn’t there anymore. Read more.

With the story of C. C. (Bud) Baxter (played by Jack Lemmon), a junior accountant who climbs the executive ladder at a big Manhattan insurance firm by lending his West Sixty-Seventh Street bachelor flat to married higher-ups — all men — for their extramarital trysts, Wilder depicts the establishment as an antedi­luvian pack whose reign awaits only a shift in climate to meet a welcome end. While sardonically depicting the routine sexual harassment of women stuck in subordinate jobs, Wilder and his co-writer, I. A. L. Diamond, also catch the headwinds of sexual revolution in the furtive freedom of the elevator operator Fran Kubelik (Shirley MacLaine), the apple of Baxter’s eye. Wilder, a bilious and mercurial wit, here becomes a wide-screen master of time, parcelling out the office hours, days, and — seemingly — years in meticulously constructed scenes; Lemmon’s eager-beaver chirpiness and Mac­Laine’s archetypal pixified sparkle put smiley faces on the grim struggles at the movie’s core. Read more.

Wilder himself, trained as he was at Berliner Ernst Lubitsch’s knee, had continually raised eyebrows and hackles before “The Apartment” — most notably in “Sunset Boulevard,” with Gloria Swanson’s romantic mishegoss with William Holden, Stroheim (her ex-director, ex-husband, live-in butler), and even, possibly, her deceased chimp. After “Some Like It Hot,” with its cross-dressing and sexual ambiguity, “The Apartment,” coming at the end of the supposedly sedate and wholesome Eisenhower-era, was the next logical step. Lemmon had turned his domicile into what his landlady termed a “honky-tonky,” where extramarital sex was the norm. The Hollywood ship had sailed, and Billy Wilder was at the dock to see it off. All that was left was for President Kennedy to turn the White House into a honky-tonky, which included (according to Steven Bach, my late friend and distinguished Dietrich biographer) Marlene in a before-lunch quickie. Read more.

The story takes place during the holidays, when the city is at its most joyous and at the same time brutal if you have no loved one or as much as a modest home to go back to. Thus, the melancholy of the season for the lonely, and the city’s cold and wet streets Baxter aimlessly strolls through on the nights he has to kill time, are poignantly emphasized in crisp black and white that washes out the temporary bliss colorful Christmas lights would normally illuminate. Add to that Wilder’s purposeful framing, focusing on his characters’ physical and emotional isolation, and “The Apartment” at once becomes a beguiling human portrayal of forlorn souls in chase of different aspects of the American dream that lead to the end goal of “security,” the common denominator of all treasures Consolidated Life of New York claims to protect. Baxter’s American dream is a high-ranking job, so he could perhaps take care of a family of his own one day just like Mr. Sheldrake. Fran, on the other hand, seeks security in the institution of marriage, if Mr. Sheldrake would indeed leave his current spouse as he often voices in his vacant promises. The paradox ultimately is the characters not knowing the real dreams could be made of littler things, and come true in tiny apartments of urban jungles, if only they would “marry their misfortunes together.” Read more.

Famously, the film was inspired by the “borrowed flat” scene from “Brief Encounter,” with all its resentment and self-loathing: the passionate orchestral surge that accompanies Fran’s decision to overdose on sleeping pills is almost certainly channelling the Rachmaninov from David Lean’s film. Wilder perhaps allowed his tense relationship with Marilyn Monroe from “Some Like It Hot” to color an ungallant joke about her here. But it’s still luminous, 52 years on. Read more.

You might not think a movie about a fellow who lends his rooms to the married executives of his office as a place for their secret love affairs would make a particularly funny or morally presentable show, especially when the young fellow uses the means to get advanced in his job. But under the clever supervision of Billy Wilder, who helped to write the script, then produced and directed “The Apartment”…the idea is run into a gleeful, tender and even sentimental film. And it is kept on the side of taste and humor by the grand performance of Jack Lemmon in the principal role. Read more.