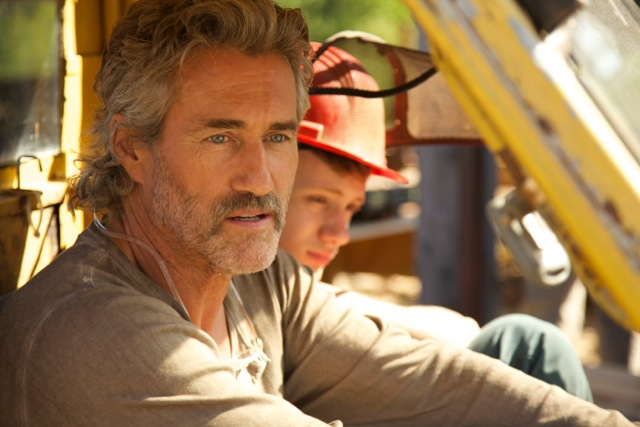 When trying to get your film made, rejection can be tough. The knee-jerk reaction is to compromise: to make the jokes funnier, the romance steamier and the sex, well, sexier—that is, to adapt your screenplay to appeal to as wide an audience as possible.  François Péloquin, a first-time Canadian filmmaker, did exactly the opposite after being rejected for funds to make his debut feature film, “The Sound of Trees.” Instead of compromising, he dove full force into his artistic vision, ultimately getting the funds and landing a world premiere for his film in the official competition in one of the major European film festivals—in Karlovy Vary.

Admittedly, things in the U. S. work differently than in Péloquin’s native Canada, where the majority of the films are state funded. But the state system of funding can also be less forgiving than privately-owned production companies: you only get three chances to apply—and after that, if unsuccessful, you can no longer use the same screenplay to apply for film funding. Péloquin and his production team had already used up two chances. “We wrote a more conventional script and we were trying to get funds for it. We tried twice and it didn’t work, only leaving us with one chance left,” he recently told Indiewire.

“The Sound of Trees,” as it premiered in Karlovy Vary (and opened in theaters in Canada last week), is a melancholic coming-of-age story set in a lumberjack community in rural Québec. The teenage Jérémie (played by Antoine L’Écuyer) dreams of a better life away from home, but is torn between a promise of freedom and what he perceives as duty to his family and the lumberjack business. The community of “The Sound of Trees” and its way of life is not represented in the media, much less in mainstream film.

“It’s not just this particular place, it’s regions outside of the center in general—they are very under-represented. As a consequence, the people of those regions don’t have an image of themselves. All they see is the city, American culture, things other than what they do in their everyday life,” said Péloquin.

Needless to say, making a film about an underrepresented culture means forging an untrodden path: besides worrying about audiences quickly losing interest, there are no role models or a body of work to step into a dialogue with. “It’s a society that doesn’t have a good mirror. If it could see itself, it could see that it could be proud of itself. But the mirror nowadays is the media, like the images that are brought to us by television. They are not very concerned with these regions. It’s difficult to have a positive self-image and to feel good about yourself when you don’t see yourself. It feels like you don’t exist,” said Péloquin.

Still, he decided to take a chance. “We changed the film, thinking the way we did it at first is not a good way to go. I did quite the contrary from what is usually done. I made the film so peculiar that it had to be done. We were confident in our script and it was our last chance at the game. So, we gave it all.”

Together with Sarah Lévesque, Péloquin cut the 110 scenes of the screenplay that they wrote previously into just 30 moments that they deemed most important. But they also made the film much more personal in form and set it in the forest, a setting he felt close to. “We decided to be more particular. That is when we changed the setting, changed the form,” he explained. “We wrote a story more like the things we like. We allowed ourselves to do a film like the films we love. We threw away the storyline and focused on the moments—the moments that are important to tell the story, the 30 moments that can explain the evolution of the character through the summertime. It became a pleasure to write it, because the scenes were longer, and there was a lot of movement and emotion. For example, I really liked the idea of the sound of trees. It’s something that gets to you so much that at the certain point, you want it to stop.”

The casting was also crucial in making Péloquin’s vision come true. “It was important because I was shooting everything in a possible sequence. All the things in the film could have been presented in one shot. Or, a series of continuous shots without editing. So the actors needed to feel the emotion and let it lead the scene,” he explained.

There was no place for stopping in-between. “The camerawork is very precise, like a choreography. I would place the mise-en-scène, place the camera. Once they were in place, the actors had to follow an emotional cue to be true in long takes. They had to be in a continuous state of realness, following their instinct and their feelings so they could stay coherent,” he said.

In a naturalistic film, where nuances of body language speak louder than words, an experienced actor was key to provide impetus for the younger actors to follow. Péloquin cast Roy Dupuis, the French-Canadian star, in the role of the father to a 17-year-old longing to venture out into the world: “Roy was a good choice because he is able to bring a scene across without dialogue,” he said. “There’s a lot of emotions, different subtleties, states of mind coming out from his gestures and his posture. I really needed that in my film, where action speaks more than words. The dialogue is just small talk. That way, Roy was a good example for Antoine L’Écuyer, the younger actor.”

And finally, Péloquin noted that artistic vision, however peculiar, is not necessarily at odds with accessibility of the film. “I did the film I had inside of me, and I learned a lot in the process. I really like this film, but now, I started a dialogue with a certain public, and I want to try to reach more people. I want to stay true to my vision of cinema, but at the same time, I don’t want to be cryptic and demanding of the audience—I want my films to be seen. I think I can be as true and bring some good moments. That’s what I will try to do in the second film.”

Watch a clip from “The Sound of the Trees” below:

READ MORE: Tensions Rise in Canadian Drama ‘The Sound of the Trees’