'Holy F*cking Sh*t' Discovery of 'Roar,' the Most Dangerous Movie Ever Made 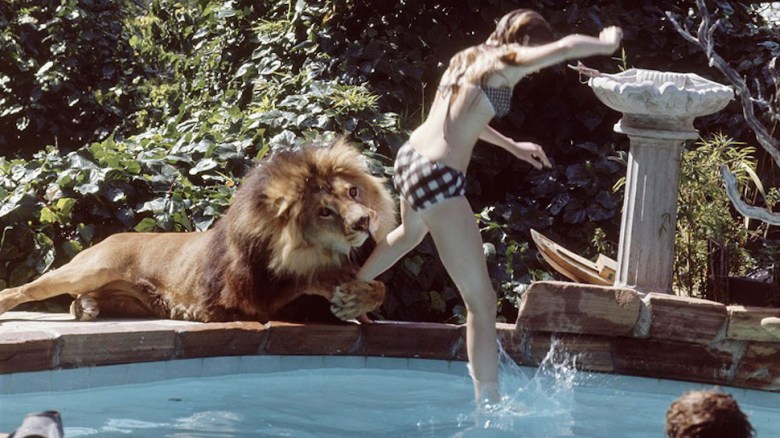 “We look for ‘holy fucking shit’ movies,” James Shapiro recently explained to Indiewire in the matter-of-fact tone of an archaeologist. In fact, he is an archaeologist of sorts: he’s the Chief Operating Officer of Drafthouse Films, which, among other things, re-releases repertory movies that are, in his words, “lost in time and ripe for rediscovery.” He and the Drafthouse team pluck would-be cult classics (such as “Miami Connection” or “The Visitor”) from the catacombs of cinema’s graveyard, asking themselves, “What can we show in the theaters that is so batshit crazy that it’ll shock, excite and entertain people?'”

This year, the answer to that question had something to do with lions, tigers, scalped cinematographers and Melanie Griffith. While in line at a film festival, Drafthouse Films founder Tim League overheard a conversation about a crazy movie that had never been released stateside. The premise sounded too preposterous to be true. Intrigued, League phoned Shapiro and asked him to get his hands on a copy.

“I watched it with my girlfriend and our three cats, who were as excited about the movie as I was,” said Shapiro. “My first thought was, ‘I cannot believe this movie exists.’ I didn’t even have to finish it. I started emailing [League] and was like, ‘Get everybody to watch it. Now.'”

“Roar” is easily one of the most outlandish production stories in movie history. (Its debacles make “Apocalypse Now” and “Fitzcarraldo” look like children’s birthday parties.) For 11 years, producer-director Noel Marshall (“The Exorcist”), his wife, the actress Tippi Hedren (“The Birds”), and their children, including then-fledging actress Melanie Griffith, lived, ate and slept in the company of 150 lions, tigers, cheetahs and jaguars.

“It was totally normal to them in the same way that someone’s got a couple of cats,” said Shapiro. Though “Roar” began as Marshall and Hedren’s effort to raise awareness about the conservation of big cats, it evolved — or, rather, devolved — into a frenzied turf war that pit man against beast. Unlike, say, the set of “Jaws,” the crew was not in cages. “They were holding cameras and boom mics, getting caught up in the action and being attacked,” said Christian Parkes, Drafthouse’s Chief Brand Officer. Because their whims dictated the narrative, the big cats literally share writing and directing credits on the film.

Some of the injuries sustained in the course of production: cinematographer Jan de Bont was scalped, requiring 220 stitches; Griffith was mauled by a lion, which required facial reconstructive surgery; an A.D. narrowly escaped death when a lion missed his jugular by an inch; Hedren, who was also attacked by birds on the set of “The Birds,” endured a fractured leg and multiple scalp wounds; and Marshall himself was wounded so many times that he was hospitalized with gangrene.

That’s just the bodily damage. Two years of production and a dozen horror stories later, financiers pulled out completely, leaving Marshall and Hedren to their own devices. The couple sold virtually everything they owned to put their heads in the lion’s mouth once again, using the remainder of Marshall’s dividends from “The Exorcist,” which he executive produced, to revive production. Naturally, the second half of the production was visited by several of the 10 plagues — two floods, a wildfire and a devastating feline illness ravaged the set. In the end, the film cost $17 million dollars (in 1981 dollars).

“By the time that it got finished, it already smelled like failure to distributors,” said Shapiro. “Roar” was never released in the U.S. It received a one-week international release in 1981, raking in less than $2 million and a plethora of bad reviews. It was deemed “the most expensive home movie ever made.”

Fast forward more than 30 years: John Marshall, one of Noel Marshall’s sons, was trying to sell his father’s one-of-a-kind home movie online when he got a call from Drafthouse. “He was ready for the world to discover this film, like, ‘Finally, someone gets it!'” said Shapiro. “At that point, we were basically willing to do anything to get the rights.” The junior Marshall pointed Drafthouse toward Olive Films, which Shapiro said had bought “Roar” as the afterthought of a larger deal, “not really knowing what it was.” Olive, which specializes in re-releases of studio films on DVD and Blu-ray, was immediately interested in entering a dialogue. The challenge was going to be the revenue split. Because they view their films as passion projects, the Drafthouse team prefers to acquire all of the rights to their releases, thus maintaining control of the revenue stream. “If we’re going to put our souls into a release, we should be benefitting,” said Shapiro.

Shapiro officially recommended against the deal, citing the rights split as an unsound financial decision. But nothing will stop an impassioned Tim League. “He gets so excited about these movies and falls so in love,” said Shapiro. “It doesn’t always look like the best business decision on paper. But he’s like, ‘Fuck it, I don’t care! I love this movie and we’re going to do it big. Don’t worry, we’ll make a lot of money.'” In an unprecedented move for the company, Drafthouse conceded to the rights split. And so the forgotten movie a family nearly died for was on its way to the canon of cult classics.

As is the strange beauty of specialty re-releases, the very reasons “Roar” initially scared away distributors turned out to be the major hooks for its revival. Take, for example, its absurdly incongruent tone. “Roar” was conceived as a family-friendly film, but the result is a Disney adventure dressed up in a snuff costume. The cheerful score belies the mortal peril that’s writ large on the faces of the family as they deliver canned lines tinged with palpable fear. In one scene, Marshall, channeling Mr. Rogers, says, “Hello, lions!” before diving into a mass of big cats; all the while, it’s unclear whether they’re playing with him or attacking him. The distinction hardly matters; the lions themselves don’t know the difference, and Melanie Griffith’s now-infamous face-mauling scene ends the same either way. “People don’t know whether to laugh or whether to scream,” said Parkes. “In most cases, they end up doing both. That’s pretty awesome.”

Drafthouse decided to expose “Roar” as the thrilling memento mori it truly is. “In the ’80s, the marketing campaign was, ‘Here’s a family film that’s not appropriate for family viewing,'” said Shapiro. Drafthouse, meanwhile, harnessed the power of hyperbole to promote the film’s deranged, rip-roaring spirit front and center. Amid the barrage of hyperbolic advertisements in our modern world, “Roar” is a rare occasion of veritable mind-boggle. “It actually is the most dangerous movie ever made,” said Shapiro. “This movie just lends itself to hyperbole, because it’s impossible to sit down and watch it and not have your mouth open in complete astonishment.”

Aided by what Shapiro describes as a “holy grail” of marketing materials — the team uncovered items, such as negatives and production photos, from a remote dumpster that hadn’t been touched since 1981— Drafthouse went out to the press. Buzzworthy claims poured in by the second. “It’s like watching a live-action ‘Lion King’ as Mufasa holds a switchblade to your throat,” wrote Matt Barone of Complex. The critical response owed much to the film’s sheer improbability. “We’re living in a time now, 30 years later, where you just can’t do this,” said Shapiro. “You only see this in YouTube videos from Eastern Europe.”

Since its April 15 re-release, “Roar” has played in 100 theaters nationwide (on 19 screens at its widest) and screened to mostly late-night audiences. At a box office total of $102,445, it is now the number one repertory film of 2015. Shapiro referred to the recent success of “Jurassic World,” this year’s top-grossing blockbuster. “It’s no wonder audiences flock to see dinosaurs eating people in 3-D,” he said. “It’s kind of like what ‘Roar’ is, just for real.”

Drafthouse, for its part, has affirmed its identity as the bygone video store clerk who recommends movies that must be seen to be believed. Said Shapiro: “If we go, ‘Hey, this is a movie you’ve never heard of, but it’s insane and you’re going to love it,’ there’s an added level of trust there because we can refer to stuff like ‘Roar.'”