Jean-Pierre Jeunet's 'T.S. Spivet' Opens With No Warning and No Reviews 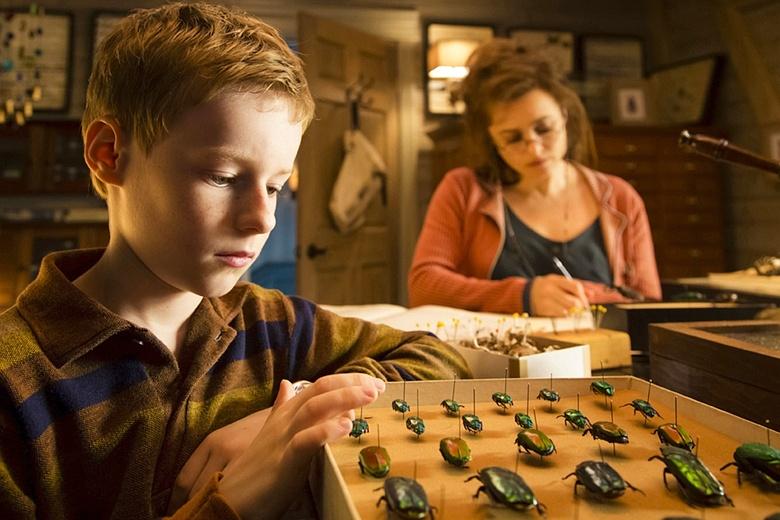 Harvey Weinstein may be legendary for his successful Oscar campaigns, but he’s also among the best in the industry when it comes to burying movies without a trace. Jean-Pierre Jeunet’s “The Young and Prodigious T.S. Spivet,” his first movie since 2009’s “Micmacs” and his first-ever in 3D, opened in New York today, but the chances are good you didn’t know that. The movie, which the Weinstein Company purchased in 2013, was slipped into theaters without screening for press or even informing them of its long-delayed U.S. release. They even refused to confirm its release by email when contacted.

In January, Jeunet screened the film, which is based on Reif Larsen’s novel, for the International 3D and Advanced Imaging Society in Los Angeles, introducing it by saying, “If the film is not yet released in the U.S.A., it’s only because Harvey Weinstein bought it, and of course Mr. Weinstein wants to re-edit it.” He continued, “Luckily I have the final cut because I’m French and it’s a French and Canada co-production. … But he put the pressure, for a question of power, to cut it. Maybe Harvey Weinstein won’t ever release the film. It’s just a question of power.”

At his blog, Jeunet wrote, “Weinstein is like a gallery owner that says to a painter: ‘Americans don’t like green, so I’ll ask the framer to use blue’ … Weinstein is actually all about power. Like a dog marking a tree, he MUST change all the movies he buys.” He explained further that Weinstein’s dallying with the film caused to lose momentum in other countries as well, owing to to a clause in the contract that the film must be released in the U.S. first. That clause expired, Jeunet says, but ” in some countries, like England or Spain, it was released in the middle of the World Cup. Flop.”

“Spivet” earned less than $10 million in its global theatrical release, and reviews of the film were mixed. But even many of the negative notices allowed that the movie was a visual stunner on a part with Martin Scorsese’s “Hugo,” especially in its native 3D. Even the few viewers who are aware and able to see “T.S. Spivet” at Manhattan’s City Cinemas Village East — or catch one of its two shows daily in Newark and North Bergen, NJ — won’t be seeing it in 3D, and given the pitiful resources expended on its theatrical run, it’s extremely doubtful the movie will be released in the U.S. as a 3D Blu-ray. (You can, if you have a compatible TV and a region-free Blu-ray player, purchase a disc from Australia.)

It’s possible “T.S. Spivet” would never have been a U.S. hit. But as with James Gray’s “The Immigrant,” it’s hard to read the treatment of a film by a director who bucked Weinstein’s demands for cuts as anything but punitive. “The Immigrant” got a decent theatrical release, but the movie was omitted from the Weinstein Company’s year-end mailings to critics for Top 10 consideration (those who asked were given a link instead), and didn’t make it to streaming or home video for more than a year after its theatrical debut. Jeunet, who unlike Gray took his complaints public, has seen his movie virtually flushed down the crapper. I won’t find out how good it is or isn’t until my copy arrives from Down Under, but either way, it deserves better.

Reviews of “The Young and Prodigious T.S. Spivet”

In a satisfying confluence of source material and director, Jean-Pierre Jeunet brings his signature abundance to bear on the richly stuffed adventures of Tecumseh Sparrow Spivet, Reif Larsen’s pint-sized Montana whiz kid whose genius gets him to the Smithsonian. “The Young and Prodigious T.S. Spivet” is the perfect 3D vehicle and Jeunet takes full advantage, offering a feast of amusing visual flourishes suited to the book’s playfulness.

Like Martin Scorsese’s “Hugo,” which also featured a young boy at large in an automated world, Jeunet’s poignantly playful film uses self-conscious/aware 3D as a mechanical throwback — a way into a lost world of machines (and situations), the complex workings of which are always on view. Thus, while Scorsese’s stereoscopic adventure explored the birth of the moving image (remember, 3D is as old as cinema itself), Jeunet harks back to his own experiments with a View-Master as an eight-year-old, cutting and rearranging frames to construct his first homemade movies, uncovering in the process the secrets of the projected image.

The Young and Prodigious T.S. Spivet is a charm offensive that rarely actually offends (though I winced at the line when Dr. Clair says of her son’s gun death: “Some things are just meant to die”), but it becomes a wearying chronicle of whimsy.

It’s a super-strength helping of twee, cut with a kilo of quirk and cooked up using a gallon of precious. Some people love this kind of thing. For me it’s like drinking melted chocolate, lemon juice and bleach.

Though the director himself claims in interviews that we are currently in the end zone of the recent 3D revolution, he does everything in his power to breath new life into the controversial medium. It’s rare the a movie uses the third dimension so persistently and adroitly, and far from your eyes adjusting and settling early on, there’s always a something going on in the foreground or background to make those uncomfortable glasses more than worthwhile.

It’s the closest thing in Jeunet’s career to a full-on kids’ picture, right down to being shot in 3D, as all family films are these days. Jeunet’s very particular style is perfectly suited to stereo visuals, and he makes better use of it than most, striking the right balance of gimmicky and immersive. It’s a shame about the film around it, then.

Anyone who has seen “Amelie” knows that Jeunet films tend to be whirring, burping, home-built contraptions whose ricketiness is all part of the fun, although this time you wish he’d swallowed his pride and called in a professional. The strong language suggests it’s not intended for a young audience, but its strained superficiality leaves nothing for older viewers either. Like one of its animated 3D asides, the film jumps out at you, twiddles around and then folds itself away into nowhere. It’s all pop-up, no book.

Flights of imagination are vividly drawn (and even more breathtaking in 3D), helping to roll over the bumpier parts, while Helena Bonham Carter adds a touch of gravitas as the boy’s mum. This is a flawed but inventive look at the world from a unique perspective.

As with Martin Scorsese’s “Hugo” — another film with a child protagonist and pronounced sense of wonder — “T.S. Spivet” demonstrates that an auteur can work marvels with 3D in a way that no studio picture has ever rivaled. However, DayGlo gloss can’t compensate for muddled motivations, sloppy storytelling and yawning emotional chasm.

Jeunet’s visual ingenuity has never been in doubt but his cartoonish approach to character and storytelling means that the film has far less emotional kick than might be expected.

The transition from wide-open plains, through rusting old train yards, to the grandeur of the Smithsonian Institute afford Jeunet the opportunity to indulge in his love of Americana, portraying a version of the country that is out of time, loaded with memorabilia and iconography of both the Old West and the 1950s. “T.S. Spivet” may not convert Jeunet’s dissenters, but for those who have admired the auteur’s past oeuvre, this is another sumptuous curio.

Catlett is terrific on-screen, holding the film together with a bright-eyed, fiercely articulate performance. And he gets superb support from expert scene-stealers Bonham Carter and Davis. To accompany the bigger themes, Jeunet makes wonderfully inventive use of 3D, opening up T.S.’s imagination visually while capturing the expansive scale of American geography and culture. Along the way, there are also jabs at intrusive media and paranoid law enforcement. But even if the film sometimes feels a little scattershot, its core emotional truth is powerfully moving. 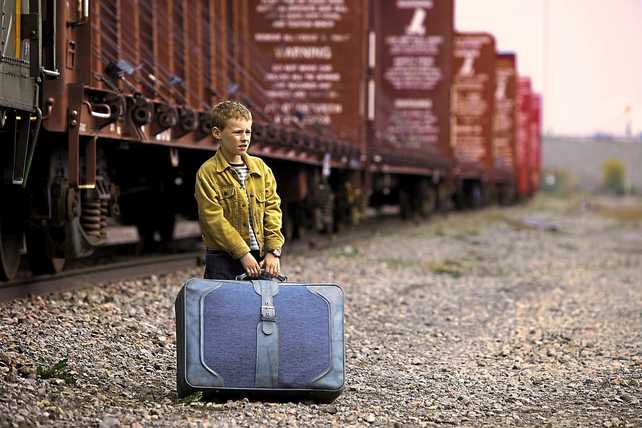 Spivet has the best use of 3D since Martin Scorsese’s pop-up moviebook “Hugo,” and uses many of the same team to make its images of snakes and freight trains pop. Perhaps by the time a collection of campy adults try to cash in on the child prodigy, his film has become a little distracted and silly, but his rabid inventiveness never bores — provided your energy levels can match those of an irrepressible junior cartographer.

It’s a super-strength helping of twee, cut with a kilo of quirk and cooked up using a gallon of precious. Some people love this kind of thing. For me it’s like drinking melted chocolate, lemon juice and bleach.

Dominic Mill, We Got This Covered

The first 45 minutes or so are actually pretty wonderful. We’re thrown into a world of saturated colors and rootsy Americana, a pastel-soaked idyll dropped right in the middle of the picturesque American wilderness. Once the hyper-colored cowpoke antics are wrapped up and T.S. begins his cross-country voyage, the film slows to a dulled crawl, walking around in gradually larger circles until it finally reaches its end-point.

The mood remains as measured as “Amelie,” but here it leaves you craving those dark shots that once caffeinated Jeunet’s work.

Jeunet knows how to cram a wide-angle landscape with delicious colours and textures (the 3D effects are so juicy). What’s missing is any sense of momentum. It doesn’t help that Catlett is a limited actor. But even the more experienced members of the cast — including Bonham Carter and the wonderful Judy Davis as the cynical head of the Smithsonian — can’t whip up tension. Like Tim Burton’s “Big Fish,” “TS Spivet” looks wacky but is, in fact, purely bland. Films like this work best if you ignore the dialogue. Bring ear buds and you’ll be fine.

Jeunet tells the tale with beautiful visions of the American heartland, a sharp eye for detail and a dry comic touch. At the core is the story of an eccentric family struck by tragedy and trying to find a way to heal their wounds. Very whimsical but also sweetly endearing.