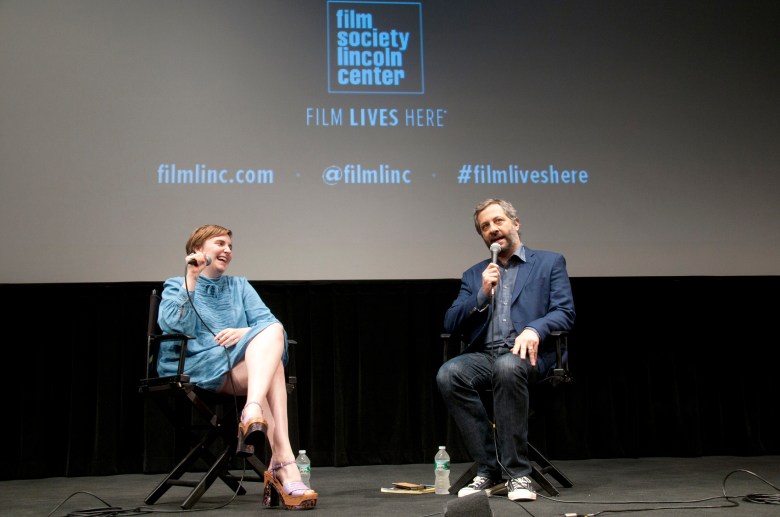 The third night of Judd Apatow’s four-day retrospective at the Film Society of Lincoln Center provided serious insight to the comedic director’s attitudes, wit and most of all respect in the industry. Apatow sat down with “Girls” creator Lena Dunham for what was a sincerely honest conversation between two comedically, and sensitively, minded people. Though the two filmmakers didn’t necessarily approach the talk with a specific angle, it was clear that any conversation between the two of them would naturally take on a course of hilarious back-and-forth, punctuated by real moments of reflection and sincerity.

The comfortable dynamic between Apatow and Dunham was palpable, and led to a genuinely intimate and eye-opening audience Q&A session from other creatives looking for advice. Everything from Bill Cosby, to feminism and diversity in the film and TV industry to Apatow’s fake Syosett radio station was discussed with a generous openness.

Despite the off-the-cuff nature of the talk, the natural underlying thread throughout the night was the obvious familiarity and respect the two filmmakers have for one another. This was most apparent in Dunham’s conviction in deflecting the well-known flack Apatow gets for his previously male-dominated screwball comedies.

“People usually assume that if you work with Judd, that he’s coming in adding the zany hand job sequence, or making sure someone farts. But it’s so not that. He’s actually the person who’s like, ‘can we get a little romance in here, can we get a little emotional truth, can we make sure people are falling in love and make sure people are connecting, make sure there’s a reason for this movie to exist?’ And that is the secret power of Judd Apatow, that I feel like is not properly expressed via modern media,” she said.

Judd shared his own admiration for the “Girls” creator while giving advice to a soon-to-be film school grad. “Whenever I talk about how to get a job and how to do things, I always talk about Lena, because Lena made a movie,” Apatow said.

“Lena did the thing that most people don’t do: she got a crappy video camera and a drunken friend and made a movie, and then she made another movie, and then she found a friend who wasn’t drunk to hold the camera. And for $40,000 she made ‘Tiny Furniture,’ which looks like a million-dollar movie, looks beautiful.”

When asked about their “a-ha moments” as writers, and respective moments of validation, both filmmakers reminisced about specific incidents that affirmed their talent, and love, for writing. For Apatow, it was when he was given an assignment in the 11th grade to write an autobiography about himself and his life. While other students took the task seriously, he instead, “made it up completely,” and instead of failing, got an A for the assignment from his teacher who consequently told him that he was funny and could be a writer.

Dunham’s moment came in the form of winning a Silver Key for Poetry in the Scholastic Writing Awards. She recalls winning the Silver Key (equivalent to second place) for a poem she wrote about her therapist in the 7th grade, in which the last lines were, “You are not my mother / You will never be my mother.”

Amidst the anecdotes that had the audience in stitches, was the acknowledgment of the release of “Trainwreck,” Apatow’s new highly anticipated project and collaboration with Amy Schumer. The director’s recent stint with female-oriented comedies has obviously sparked discourse on the portrayal of women in his infamously raunchy screwball comedies. When asked how he approaches writing nuanced female characters he claimed that he was “always a big Gilda Radner fan” and wondered “how come there aren’t 10 genius Gilda Radner movies?” and how he “never thought about writing for men or for women.” In fact, one of the first jobs he had as a stand-up comedian was writing jokes for Roseanne Barr, later going on to working on “Freaks and Geeks” which was “always about Lindsay.” Apatow concluded that he works well with women collaborators who have very strong ideas and opinions about what they’d like to see and create. Fans who check out “Trainwreck” this week are likely to agree.

If you missed out last night, the Film Society of Lincoln Center will be releasing a podcast and video of the talk later this week.