Review: 'True Detective' Season 2 Episode 4, 'Down Will Come,' Blows Up 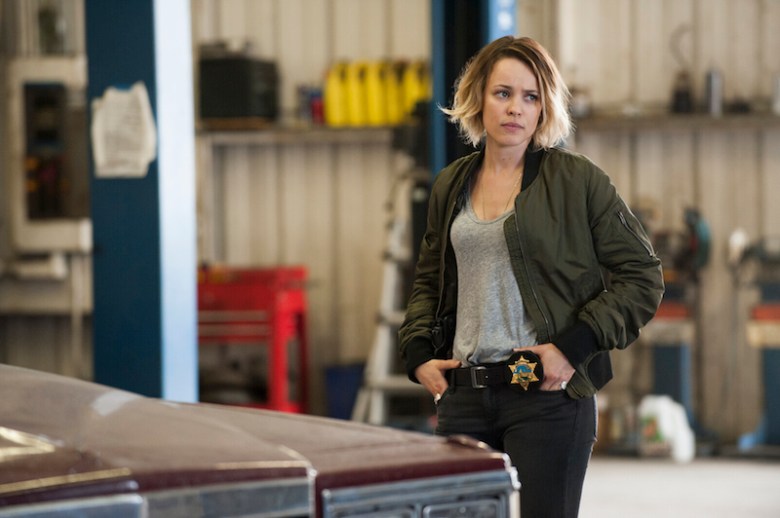 Ani may have been the only officer to be officially suspended, but none of our three detectives are safe after that bloody shootout. Bezzerides is looking at the most lip from the brass upstairs, given that this was her investigation and moreover her decision to bust down the door without a tactical unit in tow. The now deceased Officer Dixon even cautioned her against going in, preferring to wait for Ledo Amarilla outside instead of going in after him. What looked like laziness — on the part of the man who physically embodied that trait better than anyone — now appears like a good, cautious call, especially given that the Mayor is gunning for Ani’s ass. (Though, to be fair, the “bosses” — not Ani — “said take him.”)

Things aren’t looking much rosier for Woodrugh. After a tough day outside the office that included everything from a drunken hookup with his army ex to his actual ex-girlfriend telling him she’s pregnant, it’s doubtful Paul will be able to stand up to the scrutiny of an internal affairs investigation. His part in Black Water certainly won’t help him look any more innocent in an incident that killed cops and civilians alike. No one will be too eager to protect him, or any of the three left standing.

That leads us to Ventura, who one may think has the best shot at getting through this unblemished. The only issue? Frank made it very clear he didn’t want the Amarilla dead. No one believes he’s the one who actually offed Caspere and is making a play for Frank’s would-be fortune, least of all the man who’s going a bit cuckoo trying to dip back into his old bag of dirty tricks. Ray will have to answer to his master, even if the cops and the mayor will be happy to lay this matter to bed. 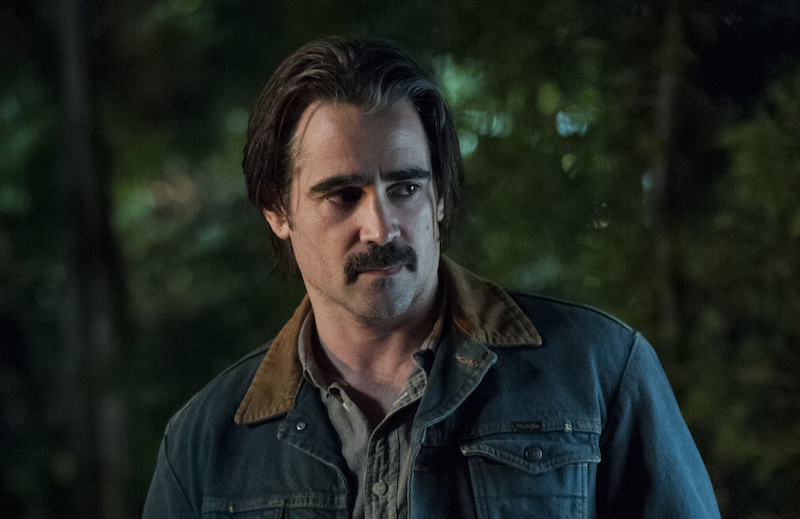 Speaking of Amarilla, just what was it that made him open fire on armed police officers in the first place? If Ray was right and the explosion was linked to the building being a “cook house,” odds are someone was on lookout to protect those inside from exactly what happened. They spotted the cops. The muscle inside shot first. The rest is history.

There are a few alternate possibilities, though. Ray told Frank about Amarilla as soon as he was labeled a suspect, and Frank turned around and told his own people. If one of Frank’s own men is gunning for his position, they could’ve tipped off Amarilla at the last second in order to ensure he got shot down when he instinctively tried to gun his way out of trouble. That leaves Frank’s Judas in the free and clear, with no one to lead anyone to Caspere’s real killer.

Of course, the same can be said for the mayor’s office. They don’t want any questions coming up about who really killed Caspere. They needed a fall guy, and who better than a dead pimp? If they somehow tipped off the drug dealers inside, it could lead to Ani’s axing — something we know the Mayor is all too keen to make happen — as well as cover any tracks that lead back to the state’s investigation of Vinci. 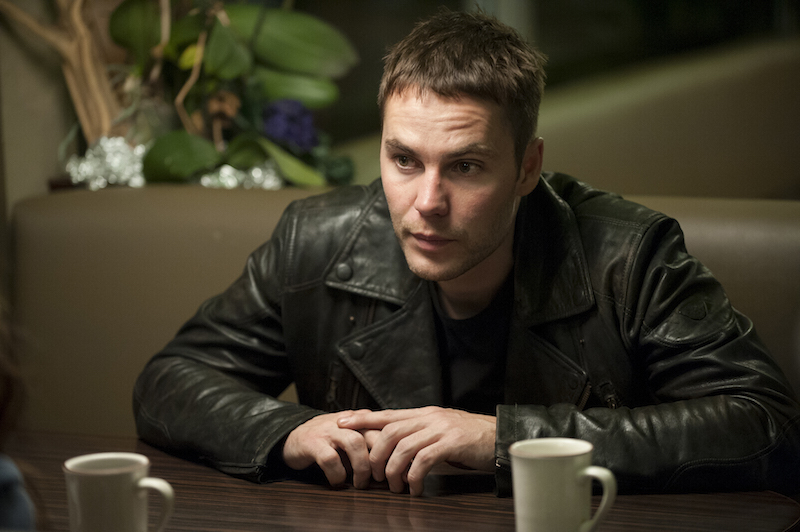 I’d say Paul had a rough couple of days in “Down Will Come,” but really, we’ve all been there. You wake up in some stranger’s apartment only to discover you hooked up with a member of the same sex the night before, despite the fact you’re desperately trying to hide your own sexuality, even from yourself. Then, when you take a cab back to your ride, it’s been stolen because you left a motorcycle unattended on a Hollywood street frequented by prostitutes, pimps and seedy members of the L.A. underworld. On top of that, when you finally make it back to your hotel, the press is waiting to accost you about war crimes you absolutely did commit.

Then you have to call your scuzziest cop friend to give you a lift, in the hopes he won’t ask too many questions as he, too, has undoubtedly found himself in a similar situation. He obliges your implied request, but you still have a minor breakdown in front of him anyway, to which he tells you to “blink away” that “dust in your eyes.” (“Be a man about it, Woody! Drown your sorrows with some Smirnoff, and don’t make me clock you!”) If that weren’t enough, you go meet your ex-girlfriend for a cup of rejuvenating coffee, only to find out she’s pregnant with your kid. Sure, that seems like good news since what better way to cover up your interest in dudes than to knock up some hottie ready to unknowingly play your beard for the next 20 years or so? But you couldn’t even muster up any fake excitement when proposing to her, making for the saddest late night diner engagement of all time (and that’s saying something).

But hey, that’s just a bad case of the Mondays, man. The next day will be better. You find a suspect. You take charge in a briefing when your boss is away. You’re on a “no big thing” task force sent in to apprehend some pimp, and things are looking up…until your whole team gets shot, dozens of civilians die and/or are wounded, and now you’re facing down the barrel of an IA investigation on top of all your other troubles. It’s okay, Paul. We’ve all been there.

[Editor’s Note: Seriously, though — Taylor Kitsch did some acting in this episode. Give the man some credit.] 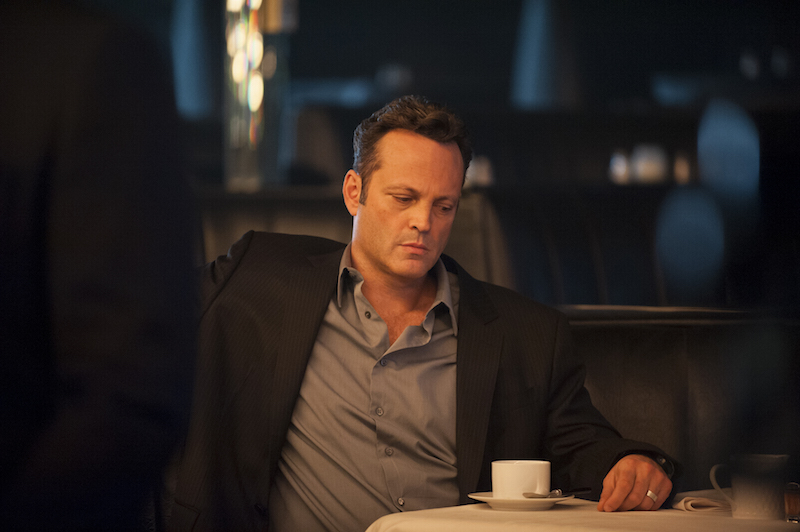 As much as I want to highlight Ray Velcoro’s description of Los Angeles traffic as a “monkey fuck,” the biggest laughs of “Down Will Come” centered around Frank, and not in a good way. As Gangster Semyon emerges from the clean-cut shadow of Business Frank, his vocabulary is becoming more and more…peculiar. It’s bad enough when your comeback to a drug dealer who claims you’ve lost your edge is showing him your dental records, but what the fuck is “louche“? “Stridency,” okay. “Apoplectic”? Fine. But “louche”? Does Frank have custom word of the day toilet paper for Ivy League gangsters? Does he think it’s threatening to confuse your verbal adversaries with upper level SAT words?

Don’t think those rings on the table got by us, either, Mr. Pizzolatto. We get it. Frank feels trapped. We don’t need to literally see your odd choice of metaphors follow him from episode-to-episode. To his credit, Vaughn is infusing the character with an apt level of controlled anger, but unless we’re also supposed to see Frank as a sophisticated cat too-far-removed from his old life to remember how it worked, this character is equally broken. 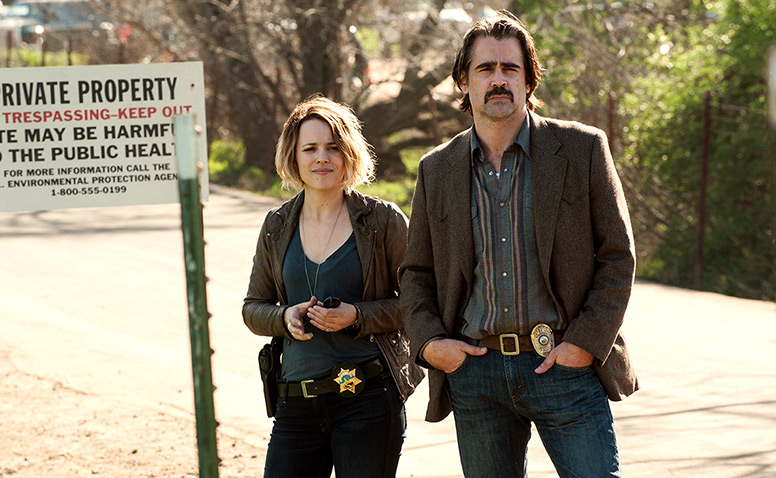 Pizzolatto continued to exercise a few personal demons in Episode 4 — I loved Velcoro’s description of the press as “Dog fuckers” — but at least one of those felt like a somewhat fair back and forth. I don’t buy Ani’s belief that Deputy Steven “I’m Not Doing That” Mercer’s complaint came out because of anything to do with the Vinci mayor’s hatred for her, but that information about her gambling debts certainly did. More to the point, though, Ani’s belief that her boss wouldn’t even be hearing this complaint if she were a man is where things got interesting on a meta level.

He broke the bad news to her by calling her “honey,” an instantly demeaning and sexist label she rightly took umbrage with before cracking into him with valid reasons for her unjust treatment — Steve is definitely getting some high-fives, and a one-time hookup with Elvis, her partner, is nothing he should be blabbing about if the whole “cops protect cops” mentality is to be believed. But, as skeezy as her boss appeared, he also raised some valid points about his own due diligence in following through on the complaint. Plus, offering up the information about her gambling debts was a somewhat classy move.

All in all, Pizzolatto deserves points for delivering a somewhat fair-and-balanced encounter, rather than making Ani out to be the abused victim or turning her into a harpy hellbent on making everything a gender issue. Instead, he tied most of it to the case — the look Ani gave the mayor when leaving for the raid was flat-out amazing — while putting Ani on the right side of the rest. She’s presented as mostly correct in claiming, “This would not be happening to a man,” and that’s a pretty big win for feminism on “True Detective.” 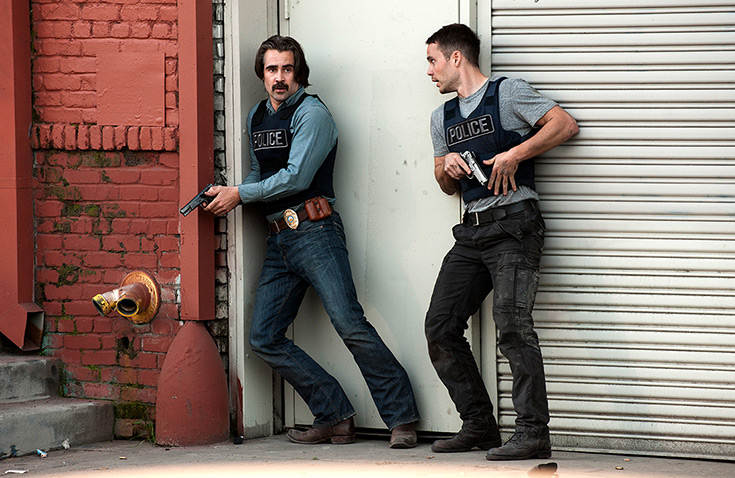 For every positive found in “Down Will Come,” a negative presented itself in equal force. Paul’s story fully broke out after being well-teased in Episode 3. Watching his world crash down around him — more so than he even knows thanks to the baby he thinks he wants — made for great drama, but Frank’s continued tour of hitting up old haunts for quick income was felled by his laughable threats. Like the drug dealers inside, the shootout itself was a little too tipped off for my liking. Stating the tactical unit wasn’t available paired with Dixon’s warning about waiting vs. storming the gate made the loud and lengthy street battle all the less surprising and the gory deaths of its victims felt like a weak attempt to make it more memorable.

That being said, the final 10 minutes of continuous action were a welcome respite from a dialogue-heavy but still engaging first 45 minutes. Pizzolatto seems to be finding his feet a bit in the last two weeks; settling into the straightforward narrative structure he so boldly incorporated after a freshman season layered with flashbacks. Now halfway through Season 2, an enticing ending seems far more likely than it did two episodes prior, and that’s in part due to the balance between character study and cop drama he’s found in recent weeks. We’re equally engaged with each element right now, and there are still plenty of possibilities for what’s next in both stories. As for now, I’ll happily take a little action paired with a lot of plot advancement before looking forward to what comes next.

Random Thoughts:
– What the heck is with that freeze frame ending? I know Pizzolatto is going for noir here, but I thought we all agreed to leave the ’80s contributions to the genre in the ’80s.

– Is Ray Velcoro Batman? The way he disappeared into the shadows the second his son got distracted proves he’s got the stealth skills for the job.

– When is Ani going to use her knife?! It’s been four episodes already, and she hasn’t so much as opened a box with it. Quit teasing me, Nic. Let Ani cut loose with the blade her mama gave her.

– Ray’s “green and black aura” is somewhat contradictory of itself. According to my initial research, a black aura indicates a long-term lack of forgiveness that can lead to health issues, but a green aura is a healthy color particularly for the heart and lungs. We know Ray’s got some chest issues. Maybe he better go see Ani’s dad and get some cleansing.

READ MORE: Why No One Can Agree On Anything About ‘True Detective’ Season 2