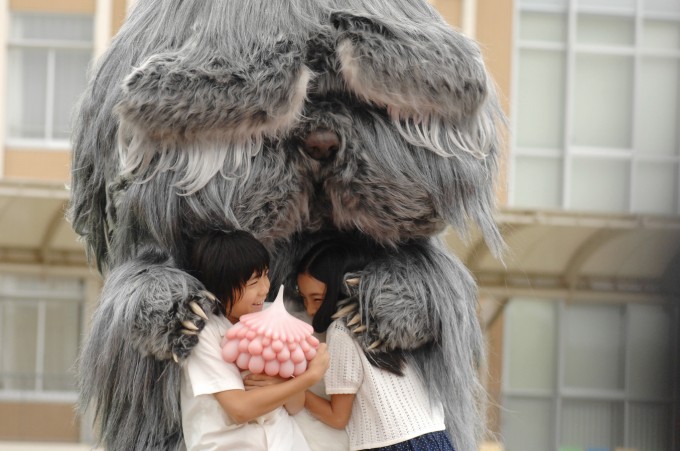 They call him the Andy Warhol of Japan, so imagine if Warhol had made a children’s movie. The second he enters the Opening Ceremony store in Soho, in suspenders and a comically oversized hat, Takashi Murakami is swarmed by a crowd of stylish fans, many whose hair colors match the anime-like creatures from his debut film, “Jellyfish Eyes.” Set in post-Fukushima Japan, the film follows a young boy who has just lost his father and moved to a new town where all the children control their own creatures, or F.R.I.E.N.D.s, through devices that look like phones. What the children don’t know is that the evil adults at the plant in town are using the devices to harness their negative energy and create a super monster F.R.I.E.N.D.

The film is playing at IFC now through July 23, and is being released by Janus Films and the Criterion Collection. Indiewire had a chance to speak with Murakami at the Criterion Collection offices, sans pink hat. When an air conditioner made a banging noise, he jumped in his seat before reminding himself there were no earthquakes in New York. It seems the specter of Fukushima still looms large.

You’ve worked in so many different mediums, but initially studied traditional Japanese art. How do you see the film fitting in with traditional Japanese storytelling?
The format I was very interested in from my childhood is the sixties and seventies kaiju monster films. I wanted to make the movie in that format with the mood of post-Fukushima Japan. It’s a little bit different from the traditional Japanese storytelling.
You’re known for coining the term “Superflat.” How does Jellyfish Eyes fit into the Superflat movement, if at all?
With “Superflat,” I was trying to capture the post-war culture of Japan. I was thinking about the state of the country that lost the war and then was protected by America, which saw Japan as an entity that cannot stand on its own. So it’s not a complete nation, and within that nation there is the culture of Japan. That was the theme of “Superflat.” In that sense, when you look at the trilogy, I will be tackling that theme a little more poignantly — the non-self-sufficient Postwar Japan — but a bit more satirically. But if you just look at part one, you might not see the context of “Superflat” yet.
How far along in the process for parts two and three are you?
The live-action has already been shot, and we’re working on the CGI in post-production. The editing of the storyboard and all that is all pretty much done.
The film has been out in Japan for two years, how has the reception been? Is it popular with children?
At the time of the initial release in Japan it was pretty much completely ignored. But since the DVD has been released and the satellite broadcasting, the children have been starting to watch it. Often for winter or summer vacation, they show it maybe two or three times a day. Since then I’ve been starting to receive a bit of fan mail.
I was curious, why is Luxor so much bigger than any of the other characters?
The initial setting for these characters was that the strength or the size of these F.R.I.E.N.D. characters has to do with the deepness or magnitude of darkness in the child’s heart. For Saki, who controls Luxor, her heart is more troubled, and that’s why there’s more darkness and why Luxor is the biggest. Part two actually revolves around exploring what is causing Saki’s darkness in her heart and in the end she and her mother will be saved. Because her heart’s trouble is also combined with her mother’s heart’s trouble, that’s why it’s so big.
Her mother belongs to what seems to be a Western-influenced evangelical cult, I was curious if that was meant to be a criticism of Western influences on Japanese culture.
Actually, that cult didn’t have much to do with the West. The real cult group that’s very popular in Japan right now is based on Buddhism, but it also has a Scientology type of idea combined into it. And whenever there are natural disasters or some big catastrophe there are a lot of cults that come to power and become very popular, so I wanted to put that in the film. It doesn’t have anything to do with the West.
You’ve written that a lot of sci-fi films were influential to you: “Blade Runner,” “Close Encounters of the Third Kind,” “Star Wars.” Science fiction often deals with contemporary fears. Obviously the film explores the fear of natural disasters, I also wondered if you were exploring a fear of data collection with the way the children’s energy is collected through their devices.

I wasn’t thinking too much about the fear of data collection. Of the Japanese prefectures Fukushima has the third largest population, so the government can’t just say, “You have to move out, you can’t be here,” but they also can’t say it’s completely safe. So they’re starting to say, “Oh, it’s getting better, it’s not that bad now.” But if you just look online at people posting the levels of radiation, the amount is actually rising. So I do have a message to the children, it’s a children’s film, which is that there is a lot of information out there, but you shouldn’t easily believe it all.”
You’ve said that you were influenced by sixties American television shows, which ones?
In my childhood in Japan the TV itself was very much influenced by American TV, for example, “The Bewitched” or “The Twilight Zone.” Those were being aired on TV, and there were many Japanese shows that were influenced by those.

As an artist, you must be used to delegating to your team of assistants at your studio. Since this is your first film, I’m curious how it was working with a film production team. How much of a hand were you able to have in every pot, so to speak?

The person who initially took care of the whole production is my friend, the director [Yoshihiro] Nishimura, who made “Hell Driver,” and his production company. We had two months to film and edit and when the edit was done, the story didn’t really make sense. We took another year while working on post-production and did additional shooting. It was very easy for me to communicate with Mr. Nishimura, we met initially for a sculpture project, and throughout the process I was learning everything from him. But, once the initial draft was done, because he was organizing everything, it was within his “shell” so to speak, and I couldn’t really feel my entity in the piece. Especially the music and the special effects, I had to kind of break it back down and re-structure. Initially, the project was supposed to be done in three to four months and in the end it took two and a half years. In the end I, myself, and my company Kaikai Kiki had to act as producer, hiring new people, re-organizing everything. In that process I realized the act of producing is actually something that is very important to me.
So, going ahead for parts two and three will there be a shift in the way you work with producers?
Yes, I’m doing everything in house now. I even created a special effects studio.
In your visual art, you’re known for your playful use of color. I want to ask about color in the film. The greens of the rice paddy were so vivid, and the plant is very dark and grey.
Just as you say, in part one I really tried to emphasize the green of the rice fields, because the way that green grass and the rice is growing, it seems very energetic and fresh and very positive. But the more the positive is emphasized the more there’s the lurking worries and negative that is beyond that. Towards the end of the movie the skies are grey and the background is mostly grey and the F.R.I.E.N.D.s alone are very colorful. In the beginning I was trying to come up with a sense of anxiety and ominousness with the use of color.
“Jellyfish Eyes” is playing at IFC in New York through July 23.