'American Crime': Can Binge-Watching Make a Show Better or Worse? 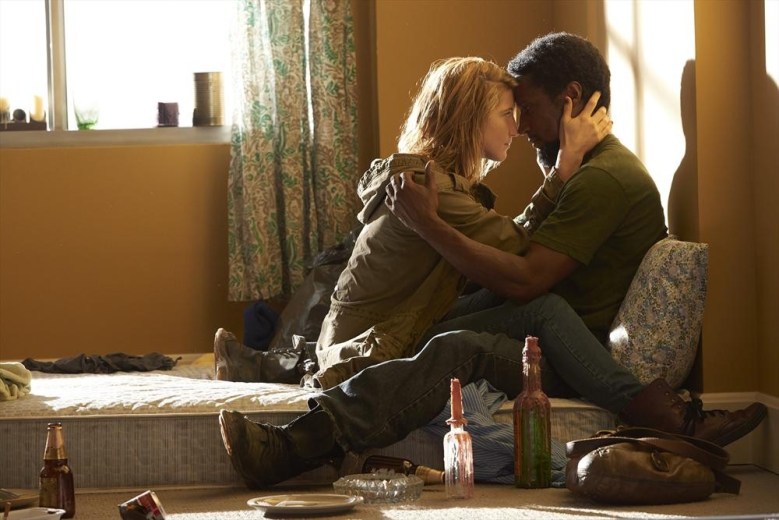 10:45 AM: It’s
Tuesday morning, August 11, and I’m sitting in the Landmark Theater on Pico
Boulevard in West Los Angeles about to watch an 11-hour marathon of the
entire first season of the ABC series “American Crime.” It’s a show
about which I know exactly one fact: it stars Felicity Huffman, an actor who I
recognize as being widely accomplished and acclaimed, but, perusing her IMDb
profile, it’s shocking to me how few of her more famous performances I’ve
actually seen. Yep, I’m that guy you know who never got into “Sports
Night.” I’ll have to confess I remember her mostly as the
controlling-but-sympathetic talent supervisor on the “What Do Kids Know?” game
show in “Magnolia.” I can confirm she’s good in that.

I think I can also safely assume two more details about “American
Crime,” given its title: it’s probably a gritty crime drama and it probably
takes place in America. But for all I know it’s a riotous farce about
American-style copycat crimes happening in, like, the Balkan Islands or
somewhere. Let’s find out.

12:40 PM: It’s
time for the first break. There appears to be some confusion about the show’s
running time because this block ended about an hour and a half before it was
scheduled to. One of the other attendees guessed it may have been because the
pilot originally aired in a two-hour chunk and was split at our screening into
two forty-five-minute-long episodes. Either way, somebody’s wires got crossed
because we’ve been recessed for an unexpectedly-long lunch. It’s just as well
because I can use the time to unpack the basic premise of the show:

Okay, so “American Crime” centers around an
ensemble of the numerous individuals involved in the aftermath of a deadly home
invasion in Modesto, California — a city portrayed here as a far cry from the
small suburban town that inspired “American Graffiti.” Huffman and
Timothy Hutton play the divorced parents of the murder victim, a young
army-veteran whose wife lies in a coma after the incident. The only other
actors I’ve recognized so far are Benito Martinez of “The Shield” as
the straight-laced entrepreneurial father of a suspected perpetrator and Lili
Taylor as some kind of legal consultant.

Right off the bat, the unique and interesting thing about “American
Crime” to me is that, for a crime drama, the actual focus on (and presence
of) law enforcement has been dialed way, way back from what I’m used to seeing. The
police are treated almost as background characters, while the families of the
victims and suspects are given center stage. That focus may very well evolve in
the remaining nine episodes, but for now it’s nice to see a murder mystery that
isn’t just your standard procedural.

With that in mind, from what I’ve seen thus far (possibly
only the pilot), I have to say the show’s not half bad. It’s maybe just a tiny
bit heavy-handed in its methods of dealing with the social complexities of the
crime in question (Huffman’s character is outwardly, unapologetically
racist — she assumes the guilty party must be “an illegal,” and there’s an
eye-rollingly ham-fisted scene in Episode 2 in which Martinez’s character’s
daughter angrily accuses him of wishing he were white), but otherwise the motivations
and plot mechanics are handled deftly enough to be at least somewhat compelling.
I’m particularly enjoying the interplay between Hutton and Huffman, and their
strained relationship with their daughter-in-law’s deeply religious parents.

As far as the marathon goes, I think I’m handling it pretty
well. I’m confident that I can make my way through the rest of the day without having
to put up too much of a struggle, which is a relief considering I had no idea
what I was in for when I arrived. Besides, they’ve got those glass-bottled
Mexican Cokes here. With the help of that stuff, this should be a breeze.

4:45 PM: Okay, I
take that back. We’re five episodes in, and “American Crime’s”
unblinking dreariness is starting to get to me. It just occurred to me that
we’re less than halfway through. The story has devolved into near-farcical
levels of familial squabbling and an often-laughable brand of soap opera
melodrama. And at the top of every episode, our hosts (entertainment news entity
The Wrap) have left intact the “previously on” recap of all the episodes we just
watched, which has injected an exponentially-growing surreality into the undertaking.

We’ve only been given a short break after the second chunk. I
think they may have realized how they screwed up the timetable and are making
up for lost time. This misstep is eating at me, because I desperately need a
breather.

6:15 PM: I know
it sounds like I’m manufacturing an arc for myself, so you’ll have to trust me
when I say my eyes are starting to glaze over. I now have a theory that the
creators of this show had a beginning and an end in mind, and when they found
out how many episodes they were given in their order they were forced to play
fill-in-the-blanks. I’m no longer sure how many installments we’ve watched and
how many are left to go. I only know that I’m trying my damnedest not to
mentally check out. There’s something to be said against throwing a series this
flatly directed haphazardly onto a movie theater screen. It’s a needless
gesture in the Netflix age, especially for a show that is decidedly non-cinematic,
and the general vibe within the tiny crowd around me is that we are a captive
audience.

All of this would be forgivable, of course, if the show had
been capable of maintaining its narrative drive or logical consistency. In the
increasingly bizarre universe that “American Crime” inhabits, a
cavalcade of the victims’ relatives have convened on a town that is not their
own, and are somehow able to settle in for months, seemingly abandoning their
existing lives for the duration of this investigation and subsequent trial.
They rely on what must be unlimited monetary resources to rent living spaces
and pay lawyers, and only one of these characters even comes close to
acknowledging financial hardship during that time. This is likely a symptom of
a much larger problem, in that “American Crime” feels like a story
stretched beyond its elastic limits.

8:05 PM: It’s our
final break. I’m ready for this to be over, but there are two more episodes to
go. We just watched the entry that contains the big reveal (if it does indeed turn
out to be the big reveal and not a fake-out), and the show didn’t conjure nearly
enough of an in-story justification of the very long delay of its arrival.

There has, however, been one truly engaging scene in the
past few episodes: a brief interaction between Felicity Huffman’s character and
a gun-shop owner that managed to succinctly convey the innate conflict that I
can only imagine must accompany the decision to purchase a firearm for one’s
own protection.

11:30 PM: I’m
home. I stayed through the entirety of the presentation and the following
Q&A session with Felicity Huffman, Richard Cabral (who skillfully plays the
informant Hector), and executive producer Michael McDonald. They all seem like
very nice people, and I’m glad they got a bunch of Emmy nominations. The actors
are unquestionably deserving of those honors. I don’t know if I would say that
about the show around them. 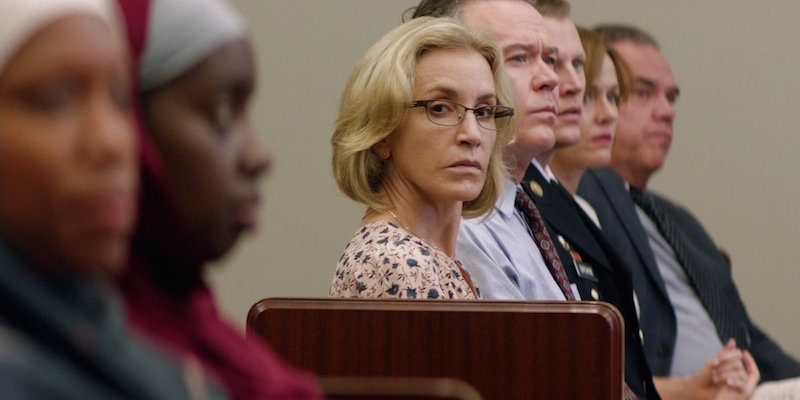 “American Crime’s” subject matter is timely, and
the series has a lot to say about prejudice, police-state oppression of people
of color, the never-ending cycle of gang violence and incarceration, the
inefficacies of the American legal system, and the politicization of violence.
It certainly succeeds in incorporating that topicality and getting across its many
varied points in its story, but unfortunately it fails to achieve that task in
an artful or even reliably entertaining way. It starts out okay, and there’s a
noticeable uptick in boldness and momentum in the final stretch, but the bulk
of the season is rough going.

Many of the lead characters are unrelatably broad, not
because they belong to different races or classes, but because they behave in largely
unfamiliar ways. Huffman in particular embodies such a wholly unlikeable,
tightly-wound liar and bigot that it’s hard to believe anyone would ever be on
her side for any reason. The plotting is maddeningly circular in its tendency
to drag and repeat over and over throughout the season until the last-minute
resolutions arrive, and those feel born of either convenience or happenstance. The
unifying theme across all of the arcs is a well-meaning but clumsily-executed
platitude of the “can’t we all just get along” variety. And one intended shocker
of an event in the finale comes across as so bleak and out-of-left-field that
it can only be described as masochistic.

Of course, this could just be a case where a small-screen
show gets blown up far larger than it should be, to the point where all its
flaws become glaringly magnified.

At its worst, the first season of “American Crime”
played to me today like a vastly overlong and monotonous after-school special, but
presenting it in the movie-theater format admittedly did not do it any favors. It’s
not the kind of show you’d want to binge-watch on any size screen — it’s not
addictive or twisty enough to be a “Breaking Bad” or even a “True
Detective.” It’s a chore to get through, and stringing it all together and
projecting it in front of an audience didn’t make it feel like a 10-hour movie.
Well, it might have felt like watching Paul Haggis’s “Crash” five
times in a row. I guess it all depends on whether that sounds like a good time
to you.