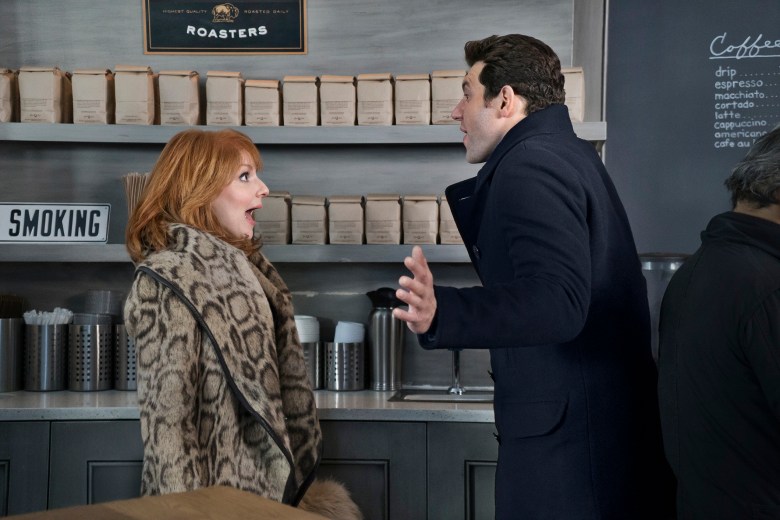 What makes a person “difficult”? It’s a fun question to ask Julie Klausner — the creator and star of Hulu’s “Difficult People,” in which she and “Parks and Recreation’s” Billy Eichner play two social media-obsessed aspiring comedians — mostly because she’s got a ready answer. At the TCA press tour this summer, Klausner spoke with Indiewire about what it is that makes these characters different from her and Billy in real life, and what we might expect from Season 2.

READ MORE: Is Saving ‘The Mindy Project’ What Hulu Needs to Do to Take On Netflix?

So when I watched the show, I didn’t find the characters of Julie and Billy all that unlikable, though they certainly had strong personalities. Do you see them as bad people?

I don’t think they’re terrible people. They’re difficult people, yes. They’re not very polite. Often times they’re extremely rude and inappropriate. They’re bitter, honestly. I think bitter is probably the most accurate word in describing the Billy and Julie on the show. I think bitter is kind of a bad word, and I’m excited about— I don’t want to say taking it back, but re-interpret it in a context of, “Yeah, we’re bitter! Is that the worst thing in the world? The world sucks. It’s treated us like shit. We’re bitter because of it.”

Do you think the characters are more bitter than you are yourself?

Definitely, and the principle difference between Billy and Julie on the show and Billy and Julie in real life is that they don’t have a lot of self-awareness. I think that self-awareness counts for a whole lot because if you can be aware that you’re blaming the world for things that maybe sometimes you have some responsibility in, then you can work on changing it if you care to. Or at least just own that you’re as much of the problem as the people around you.

So self-awareness as a cure for bitterness maybe?

I think it’s a defense against someone saying something about you that don’t know already. In other words — and I think Amy Schumer is brilliant about this — when you deal with someone who’s smart enough to know how she or he comes across, there’s very little you can do to shut them down. I find that really empowering honestly. I think a lot of what I do on my podcast is talk about the ways in which sometimes people are shitty and try to make you feel bad. One of them is, oh that person’s really unhappy. Or that person is bitter, sour grapes. What if I knew that? What if I came to someone and said, “I’m unhappy and really bitter?” What else would you have in your arsenal? That I’m fat? That I’m ugly? That I’m stupid? Well, I know I’m not stupid. I’m very straightforward about my appearance. I think self-awareness and responsibility are very important values to me, Julie Klausner, and I have a lot of fun playing someone who just doesn’t have the self awareness to not be a jerk. It’s really funny. It really is the opposite of social intelligence. It’s the opposite of empathy. Wouldn’t it be fun to really not care? That’s really fun playing this character.

One thing I really love about the show is bringing in James Urbaniak, who is so great. What went into developing that character?

The role of Arthur was written for James Urbaniak. There’s no one I’d rather have play it besides him. I’ve had relationships that are similar to the one Julie has with Arthur. I think Julie and Arthur on the show are very co-dependent. I don’t think that either one of them is elevating the other towards any growth in their lives. I think that Arthur is very much a third wheel to her main relationship with her best friend. I think the idea of someone who is supportive and infatuated with Julie is something that lends a different flavor to her contempt. In other words, “Oh, you think I’m great? You must be a fucking idiot.” But, also, I love the idea of subverting the funny husband with the supportive wife. That was a big part of that character as well.

It does seem like he is a nice, stabilizing influence for her.

He can be, but if anybody can reach Julie when she’s really off the handle it’s Billy, not Arthur. You don’t send a Boy Scout to do the Navy’s job.

Yes, it’s nice to see a gay man that isn’t overly invested in a woman’s love life or her beauty routine or her fashion options.

Is Season 1 all in the can?

It’s all in the can!

Fantastic. I bet that feels good.

It does, it does, though I’m eager to make more.

That’s leading up to my question! The show seems like it has a really firm foundation. Is that something you want to build upon in the second season, or do you want to shake it up?

In doing so, could they ever really be happy and successful?

So nothing is ever really enough for them?

I don’t think so, not unless they change drastically. I don’t think that’s the case. I think something could be enough temporarily, but then wake up the next day and be upset about something else again.

Is there anything or anyone who’s totally off limits, never could be made fun of?

Well, we would never make fun of people that we love, and we love a lot of celebrities. Wendy Williams is a really good example. What would we say that would be nasty about Wendy Williams? Also there are so many celebrities that get pot shots that there’s nothing left to say. I hate Kim Kardashian jokes. I hate Kanye West jokes. Even Donald Trump, it’s like, who cares? The things that are more interesting to me are the things that haven’t been discovered, or that represent other tropes of humanity that have yet to be compared to examples of.

Well, I’m glad we gave you your first experience. It certainly won’t be the last.