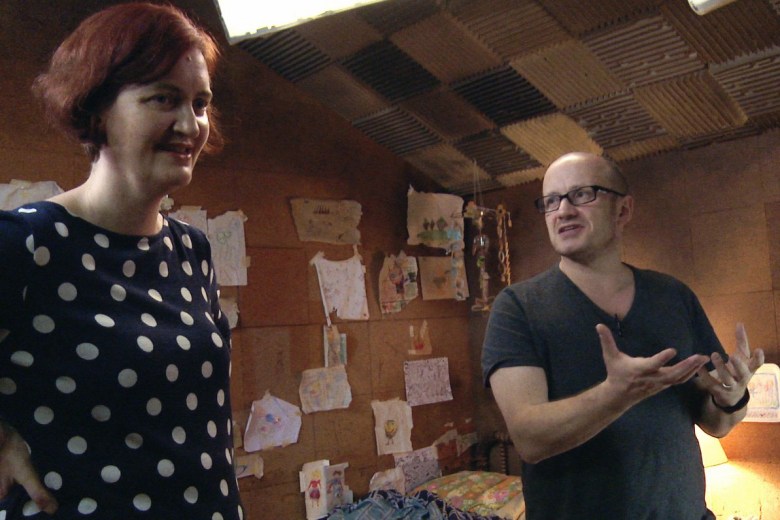 Four and a half years ago, just months after my novel was published, I got this letter from a filmmaker called Lenny Abrahamson. “ROOM imagines an extreme case to illuminate universal truths about the parent-child relationship,” he wrote, “and although its discoveries are not always comfortable, at heart this novel is a celebration, both of parental love and of the resilience and resources of childhood.”

Ah, I thought, this man gets it.

Unlike other filmmakers I’d spoken to, Lenny was undaunted by what he called the book’s “audacious structure” and the prospect of the camera being shut up in an eleven-by-eleven-foot shed for the entire first half. He didn’t suggest flashbacks, dream sequences or other tricks to break that claustrophobia; he didn’t see it as a problem to be worked around, but a microcosmic world to be explored.

“‘Room’ is Jack’s universe as it is Ma’s prison,” he wrote, “a fantastically rich, story-filled and ritualized space.” Lenny instantly grasped that the question posed by the first half is not so much “How will they get the door open?” but “How will Jack have the courage to go through it, and Ma the courage to let him?” His letter said, “When Ma recognizes that the status quo can’t hold and she has to dismantle the ad hoc cosmology of Room – to ‘unlie,’ forcing Jack into a much colder reality – he derives the extraordinary courage he needs from the sensation of her he carries with him.”

How to find a cinematic equivalent for a book told in the first person by a five-year-old? “When he’s wrapped in the rug playing dead we’ll be with him, on his face, or seeing what little he can see,” Lenny told me. “Jack is the focus – we are with him, watching his face – pivoting the rest of the action off his reactions, experiencing the scene through him. This is the untranslatable stuff of film, this physical being-with; it’s the dimension we gain even as we lose the direct narrative voice.”

Lenny also saw that while the story has thrilling elements, it’s not a crime thriller, so the escape doesn’t come at the end but halfway through. He wanted to hold to a “‘low-key and natural” tone without relying on “easy genre techniques” to create suspense and catharsis. The father of a small boy, with a baby girl on the way, he recognized this weird story as a heightened variation on everyone’s experience, especially in the second half. “ROOM becomes an amplified, accelerated version of the process of separation which all children must go through as they face a world beyond the safety of parental love.”

And so on, for ten pages. The man completely understood what I’d been trying to do in fiction, and he had a clear and burning sense of how to tell the same story on screen. “Serious films can reach big audiences but only when they are made boldly and without compromise,” he wrote, promising to “keep ROOM safe from harm.”

So it wasn’t because of Lenny’s brilliant earlier films that I let him have the rights to “Room,” nor because he’s a fellow Dubliner (though that helps – no Hollywood gush, and I can’t spend five minutes with the man without laughing). I said ‘yes’ because he wrote me a letter as brilliant as it was courageous in putting his cards on the table, a letter that let me glimpse the masterpiece he would make of “Room.” Filmmakers, take note, this is what authors want from you: not fruit baskets or flattery, just a vision to match our own.

Screenwriter and Novelist Emma Donoghue will share highlights from her journey in turning her best selling novel into a feature film twice a week (Tuesdays and Thursdays) on the official ROOM website, sharing thoughts from before, during and after the shoot. Each post will include never-seen pictures or behind the scenes videos from set. “Room” will premiere in September at TIFF, with a limited release kicking off on October 16, with nationwide expansion to follow on November 6.