Here Are All the Movies Opening Today, August 21; What Will You See? 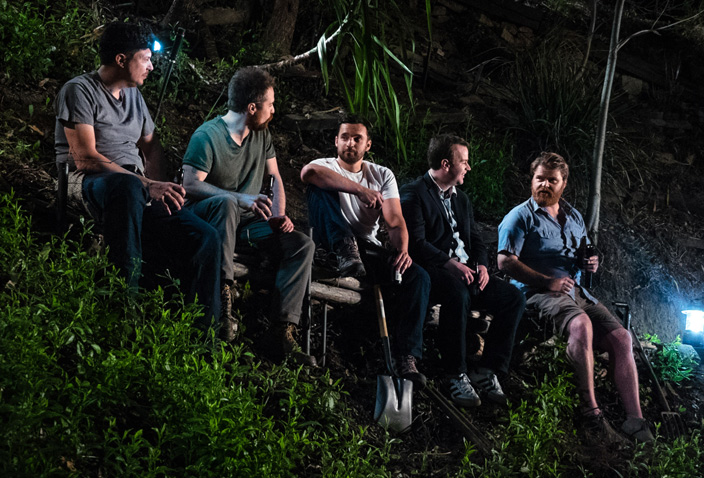 Here are the films opening theatrically in the U.S. the week of Friday, August 21. All synopses provided by distributor unless listed otherwise.

Being Evel
Director: Daniel Junge
Synopsis: “In the history of sports, few names are more recognizable than that of Evel Knievel. Long after the man hung up his famous white leather jumpsuit and rode his Harley into the sunset, his name is still synonymous with the death-defying lifestyle he led. Notoriously brash, bold, and daring, Knievel stared death in the face from the seat of his motorcycle, but few know the larger-than-life story of the boy from Butte, Montana. After an adolescence riddled with petty thievery and general rabble-rousing, Knievel set his sights on superstardom, a feat he achieved when televisions around the world aired the startling crash footage of his 1967 attempt to jump the fountains at Caesars Palace in Las Vegas. The jump was spectacular, but the failed landing that sent him skidding like a ragdoll across the asphalt was the main attraction. Throughout the 1970s, his legacy as King of the Daredevils spawned action figures, movies, and a generation of kids who wanted to be just like Evel.” [Sundance Film Festival]
Theatrical Release: Various (including New York, Los Angeles, Denver and San Diego)

Beltracchi: The Art of the Forgery
Director: Arne Birkenstock
Synopsis: “A mesmerizing, thought-provoking yet surprisingly amusing documentary on the life and times of Wolfgang Beltracchi, who tricked the art world for nearly 40 years by forging and selling paintings of 20th-century masters. A larger-than-life personality who was responsible for the biggest art forgery scandal of the post-war era. An expert in art history and painting techniques, he tracked down the gaps in the oeuvres of great artists and filled them with his own works. He and his wife Helene fooled renowned experts, curators and art dealers. In Beltracchi – The Art of Forgery, Wolfgang and Helene Beltracchi chat openly – and with great wit and charm – about their quixotic adventures in an overheated art world ruled by blind greed, and in which apparently no one has an answer to the question as to what is an original, and what is a forgery.” [Berlin International Film Festival]
Theatrical Release: New York

The Curse of Downers Grove
Director: Derick Martini
Cast: Bella Heathcote, Lucas Till, Penelope Mitchell, Tom Arnold, Kevin Zegers
Synopsis: “The town of Downers Grove looks like your average suburban neighborhood — but Downers Grove has a disturbing secret…. For the past eight years, one senior from every high school graduating class has met a bizarre death right before graduation day. And this year, Chrissie Swanson has a terrible feeling that she is going to be the one to die. Can Chrissie survive the curse of Downers Grove or will she, like those seniors before her, fall prey to the town’s deadly secret?”
Theatrical Release: Los Angeles

Digging for Fire
Director: Joe Swanberg
Cast: Jake Johnson, Rosemarie DeWitt, Anna Kendrick, Orlando Bloom, Sam Rockwell, Brie Larson, Chris Messina, Melanie Lynskey, Jenny Slate, Ron Livingston, Mike Birbiglia, Jane Adams, Tom Bower
Synopsis: “Young married couple Tim and Lee have planted the seeds of a family in their East LA duplex. Three years after the birth of their son, they’re still adjusting to the joy and pain of life with kid, navigating potty talk at the dinner table, disagreeing over preschools, and putting off doing their taxes. For a change of pace, they decide to housesit for one of Lee’s Westside yoga clients. Once there, Tim discovers something suspicious in the yard that gets the wheels in his head turning, and Lee, worried that he will become obsessed with digging deeper, decides to drop their toddler off with her mother for a much-needed night out on the town. Sans-wife, Tim invites his buddies over, and a ‘boys-will-be-boys’ scenario ensues, full of drinking, awkward joint-passing, and perhaps getting a bit too close to a girl who isn’t the mother of his child.” [Synopsis courtesy of Sundance Film Festival]
Criticwire Grade Average: B- (14 reviews)
Theatrical Release: New York, Los Angeles and Chicago (expands to twenty additional markets on August 28th)

Grandma
Director: Paul Weitz
Cast: Lily Tomlin, Julia Garner, Marcia Gay Harden, Judy Greer, Laverne Cox, Sam Elliott
Synopsis: “Elle, a onetime successful poet, abruptly breaks up with Olive, her girlfriend of four months. But before she gets a chance to get overly sentimental, her granddaughter, Sage, unexpectedly shows up with an emergency that requires money. With the clock ticking, the two set out in a vintage Dodge and drop in on Elle’s old friends and flames, asking for help but instead ending up rattling skeletons and digging up secrets. As they kick up a storm all over town, Elle’s tough front reveals she is still reeling over the loss of her longtime partner, Vi, who recently passed away.” [Sundance Film Festival]
Criticwire Grade Average: B+ (20 reviews)
Theatrical Release: New York and Los Angeles (expands nationwide throughout the end of October)

Guidance
Director: Pat Mills
Cast: Pat Mills, Zahra Bentham, Laytrel McMullen, Alex Ozerov, Kevin Hanchard, Tracey Hoyt
Synopsis: “David Gold, 36, a pathologically immature former child actor, has never been able to get over high school. Recently diagnosed with skin cancer, unemployed and with nothing left to lose, he fakes his resume and gets a job as a high school guidance counselor. Quickly winning over the students at Grusin High with his laidback attitude and similar interests, he befriends Jabrielle, a teenaged outcast and soon learns that sometimes you can go too far, especially when it comes to committing a ridiculous crime.”
Theatrical Release: New York and Seattle (expands to five additional markets through the end of September)

Gurukulam
Director: Neil Dalal & Jillian Elizabeth
Synopsis: “Every individual confronts fundamental questions about the nature of reality, self-identity, and elusive happiness, yet few make these their life goal. An international group of students have traveled to a monastery in a remote area of southern India with the single purpose of discovering these answers. ‘Gurukulam’ is a journey into their lives, a wisdom tradition, and the contemplative space in which it is carried.”
Theatrical Release: New York

The Iron Ministry
Director: J.P. Sniadecki
Synopsis: “Filmed over three years on China’s railways, The Iron Ministry traces the vast interiors of a country on the move: flesh and metal, clangs and squeals, light and dark, and language and gesture. Scores of rail journeys come together into one, capturing the thrills and anxieties of social and technological transformation. The Iron Ministry immerses audiences in fleeting relationships and uneasy encounters between humans and machines on what will soon be the world’s largest railway network.”
Criticwire Grade Average: A- (9 reviews)
Theatrical Release: New York, Los Angeles, Chicago and San Diego (opens in Seattle on August 28th)

Learning to Drive
Director: Isabel Coixet
Cast: Ben Kingsley, Patricia Clarkson, Grace Gummer, Jake Weber, Sarita Choudhury, Avi Nash, Daniela Lavender, Harpreet Singh Toor, Samantha Bee and John Hodgman
Synopsis: “Wendy is a fiery Manhattan author whose husband has just left her for another woman; Darwan is a soft-spoken taxi driver from India on the verge of an arranged marriage. As Wendy sets out to reclaim her independence, she runs into a barrier common to many lifelong New Yorkers: she’s never learned to drive. When Wendy hires Darwan to teach her, her unraveling life and his calm restraint seem like an awkward fit. But as he shows her how to take control of the wheel, and she coaches him on how to impress a woman, their unlikely friendship awakens them to the joy, humor, and love in starting life anew.”
Criticwire Grade Average: B+ (9 reviews)
Theatrical Release: New York and Los Angeles

Mateo
Director: Aaron I. Naar
Synopsis: “Matthew Stoneman dreamed of pop stardom. Instead, he went to jail, learned Spanish, and emerged as ‘Mateo,’ America’s first white mariachi singer. Mateo is on the brink of completing an album of original songs in Havana. But his estrangement from friends and family, his criminal past, and his love for Cuban women could derail him on his quest for fame.” [SXSW Film Festival]
Theatrical Release: Los Angeles

The Park Bench
Director: Ann LeSchander
Cast: Walter Perez, Nicole Hayden, Stella Maeve, John Prosky, Brian Mulligan, Dustin Fitzsimons
Synopsis: “When Emily, a librarian-to-be, is assigned to tutor Mateo, a struggling undergrad, in American Lit, they do not get along; but when the discussion turns from classics to confessions, they learn something that could change their lives forever.”
Theatrical Release: Los Angeles

Searching for Home: Coming Back for War
Director: Eric Christiansen
Synopsis: “An unflinching, emotionally involving, extremely personal look at veterans returning from war and their search for the “home” they left behind, physically, mentally and spiritually. From World War II, Korea and Vietnam to the modern day conflicts Searching for Home chronicles the trials of assimilating back into civilian life. A multi-generational tribute, Searching for Home honors all the men and women who have left home only to return to the same place but as a changed person.”
Theatrical Release: New York and Los Angeles

Station to Station
Director: Doug Aitken
Synopsis: “Sending a burning arrow into the stunting effects that the compartmentalization of culture has on how creativity manifests, visual artist Doug Aitken embarked on an experiment exploring a less materialistic and more nomadic direction of art creation, exhibition, and participation. Station to Station involved a train that crossed North America housing a constantly changing creative community including artists, musicians, and curators, who collaborated in the creation of recordings, artworks, films, and 10 unique happenings, across the country.” [Sundance Film Festival]
Theatrical Release: Los Angeles

Top Spin
Director: Sara Newens & Mina T. Son
Synopsis: “Set against the backdrop of one of the most under-appreciated sports in America, three teenagers battle their way through the world of competitive ping pong. While facing the unusual challenges coming of age in a niche sport, their journey reveals the passion it takes to pursue their Olympic-sized dreams.”
Theatrical Release: Los Angeles

Youth
Director: Tom Shoval
Cast: Eitan Cunio, David Cunio, Moshe Ivgy, Gita Amely, Shirili Deshe
Synopsis: “Brothers Yaki and Shaul live with their parents in Petah Tikva, a satellite town of Tel Aviv. Yaki is doing military service. As for all other 18-year-old Israelis, this means he is allowed to carry a gun. This weapon gives the brothers the power to change their lives and that of their family – or so they believe. This unusual coming-of-age story marks director and film critic Tom Shoval’s feature-length debut. His film is a meticulous delineation of the close bond existing between the brothers and the unchanging aspects of their young lives: their daily routine, their family, their neighbourhood, and their country. Their now unemployed father descends into depression and the family is on the brink of losing their apartment. While Yaki is on a tour of duty, Shaul pursues a pretty young girl, filming her every move on his mobile phone and sending his brother the clips. They kidnap the girl, hide her in a cellar and then place a call demanding a huge ransom for her release. But they’ve forgotten that today is Shabbat and their victim’s orthodox family will not answer the phone. Time starts to run out …” [Berlin International Film Festival]
Theatrical Release: New York

Missed last week? Here are all the releases from the weekend of August 14th.