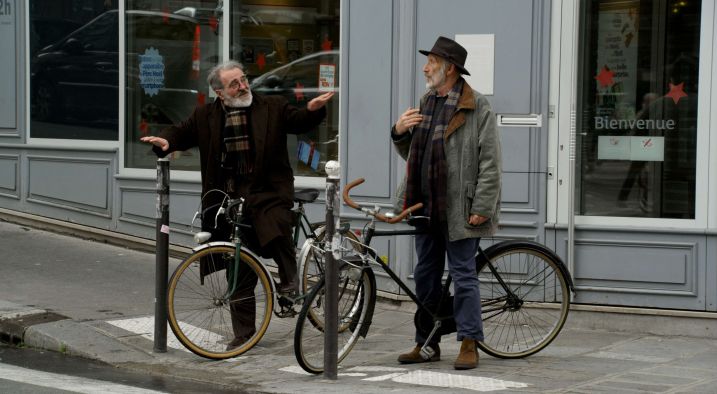 Moments after raping and pillaging an entire war-torn town, soldiers from some unnamed battalion gather in silence around a piano, surrounded by empty wreckage, as one of the men plays a solemn tune. Then they’re baptized. In another time and place, protestors are carted away by police forces, but as the van incarcerating them drives off, the camera lingers on a group of tai chi practitioners standing nearby. In the city, a homeless man gets flattened to pancake proportions by a bulldozer, only to be salved by other pedestrians who slip him under a doorstep. These are just a few of the sublimely ridiculous moment in Georgian-French director Otar Iosseliani’s “Winter Song,” an alternately tragic and funny odyssey from a master of striking that balance. But while in tune with his many other films, “Winter Song” remains fully enjoyable on its own terms.

From the confines of this disarming scenario, Iosseliani builds a spellbinding world, where the seemingly barren wall of a building can suddenly develop a magical door to an outdoor wonderland, and top hats can flutter down the street in harmony following a gust of wind. The loose set of events intersect at various satisfying points, with the ambivalence of a local despot having a direct impact on the fate of the movie’s doleful protagonists, but “Winter Song” largely resists narrow storytelling methods in favor of countless digressions. 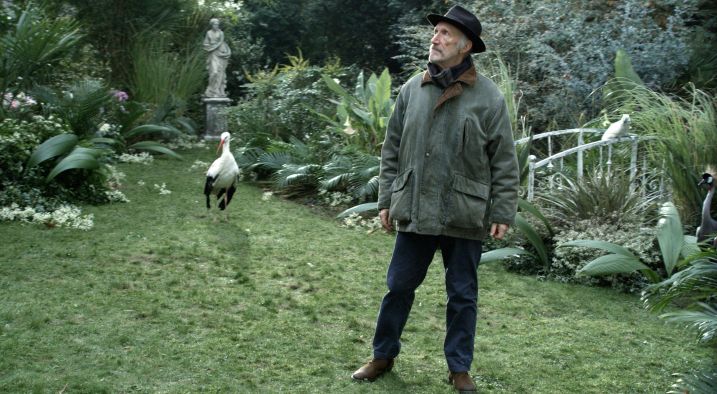 Iosseliani’s indelible style connects the dots between the visual gags of silent slapstick maestro Buster Keaton and the aural innovations that Jacques Tati brought to the table. The director’s largely static framings and deadpan storytelling has a kinship with Sweden’s Roy Andersson. Mostly, though, “Winter Song” belongs to Iosseliani’s own spiraling filmography, which covers more than five decades.

Despite the gentle, bittersweet tone, Iosseliani’s work tends to possess a polemical slant that stretches back to 1961’s “There Once Was a Singing Blackbird.” In many of his films, provincial and urban worlds collide as the search for happiness is interrupted by constant distractions both institutional and personal alike.

“Winter Song” is no exception, but that hardly makes it a tossed-off refashioning of familiar motifs. Regardless of the numerous detours, it sticks with a consistent world, in which its lovable aging leads present an infectious attitude even as various strange and sometimes menacing events pile up.

These range from their building’s concierge apparently smuggling a bazooka gun with nameless hoods in exchange for…books, and neighborhood thieves on rollerblades who operate with remarkable precision. There’s a young man attempting to woo the daughter of a local politician, a quest that falls flat until the main duo advise him to tell her about his disdain for Beethoven. Looming above it all is the girl’s father, a mean-spirited bureaucrat who spends his days floating in a pool but ultimately winds up in a sewer. Oh, and let’s not forget the runaway cow.

While various fragments swirl about, Iosseliani directs the proceedings with a straightforward approach that holds them together. Generally regarding his characters from afar in long takes, they often resemble the wide-eyed subjects of a whimsical New Yorker cartoon, wandering within the confines of the frame and a joke that seems funny even as it carries a deeper message.

At times, “Winter Song” does suffer from a few too many tangents for its own good. By the time Mathieu Amalric crops up in a fleeting role, “Winter Song” has already developed a crowded ensemble. Still, the movie is carried by its inspired vision throughout, thanks to Iosseliani’s unique ability to ceaselessly move in surprising directions. Even as it ends with a shrug, the finale has a certain understated poignance: Iosseliani suggests that while the universe may contain endless hurdles, life always goes on.

“Winter Song” premiered this week at the Locarno Film Festival. It does not currently have U.S. distribution.