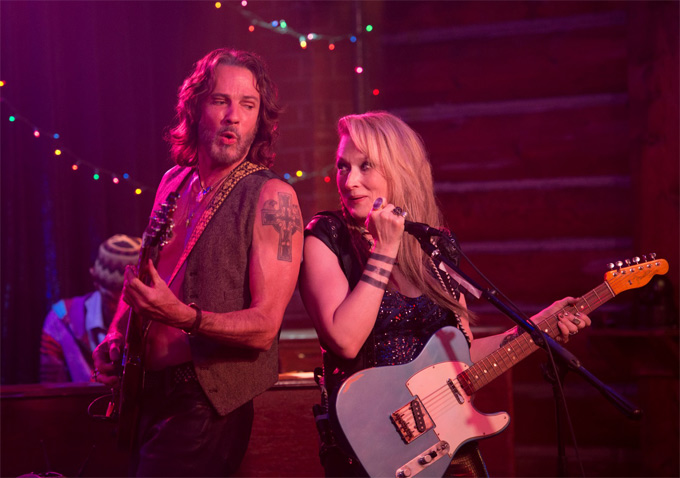 There are several authors at work in “Ricki and the Flash,” a lively musical dramedy about an aging rocker trying to make amends with her estranged family. Diablo Cody’s warm and occasionally cheeky screenplay follows the usual sentimental beats with standard Cody snark sprinkled liberally throughout. Director Jonathan Demme transforms the material into an infectious treatise on the healing power of music, often hijacking the entire narrative in favor of a concert film, as is his wont. Meanwhile, Meryl Streep — as the titular Ricki — beams for the camera and shows off her singing range, veering from overly glamorous to spectacularly in the moment and back again. In other words, everyone’s doing their usual thing, not always in perfect harmony but with plenty of vigor.

This trifecta of influences is clear from the opening scene, as Ricki belts out a jumpy cover of Tom Petty’s “American Girl” alongside her lively guitarist (Rick Springfield, an inspired choice) at the drab Los Angeles pub where her group serves as the house band. It’s one of several times in which Demme allows the band to play a tune all the way through. Captured with a restless shaky cam style and ample closeups of the blue collar audience, the sequence at first resembles one of Demme’s Neil Young documentaries, where the music runs the show.

But then the song ends and Cody’s screenplay takes over, with Ricki’s awkward stage banter showing her uneven state. After casually directing a racist inference at her black keyboardist and showing her Republican colors, she gets into an awkward spat with her guitarist about whether or not they’re an item off-stage. The scene culminates with the fragment of the band’s next song — a Lady Gaga cover — and the formula is complete: Demme wants to celebrate the music, Cody’s more interested in denigrating her lead and Streep just looks thrilled to toy with the wildly different sensibilities in play.

Then the real story kicks in and, for a while, “Ricki and the Flash” sags into a basic formula. Ricki’s pulled away from her bland day job at the checkout counter of a local supermarket to take an urgent call from her wealthy ex-husband Pete (Kevin Kline), who urges her to return to the Indianapolis home she abandoned years ago in pursuit of her career ambitions. Their twentysomething daughter Julie (Streep’s daughter Mamie Gummer, in their third onscreen collaboration) has been abruptly dumped by her husband for another woman. With Pete’s newer wife (Audra McDonald) out of town, he desperately needs a woman’s touch, and begs Ricki to come help. So begins an uneasy odyssey in which the leather-clad, foul-mouthed Ricki awkwardly attempts to insert herself into a palatial white collar setting and make peace with her neglectful ways. 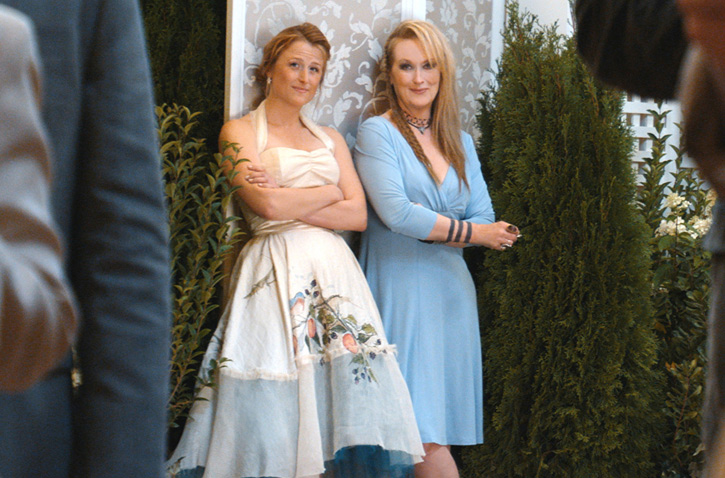 The set-up bears a marked similarity to Cody’s screenplay for “Young Adult,” in which another aging basketcase returns to her old haunts and resurrects painful memories. However, “Ricki and the Flash” eventually veers away from the sheer spiteful elements of “Young Adult” and becomes a tamer “Rachel Getting Married,” focusing on familial discord with an almost operatic quality as various awkward exchanges take on more complex manifestations through performance. When “Ricki and the Flash” pierces its conventional trajectory with music, it gets more interesting. But the fluff surrounding it holds together well enough.

Once Ricki arrives in Indianapolis, her rocky relationship with her troubled daughter erupts into pure chaos. Mother and daughter (onscreen and off) clearly seem to enjoy trading barbs, and the standard bonding process is frequently interrupted by Cody’s penchant for cheeky one-liners. (“Do you always dress like a hooker from ‘Night Court'”?) Their initial challenges dovetail into much broader issues between Ricki and the rest of her family when the group sits down for a hectic dinner. It’s here that she swallows the news of one son’s homosexuality and learns she hasn’t been invited to her other son’s upcoming wedding. Despite these tough odds, Ricki attempts to regain her maternal role with darkly comical results. 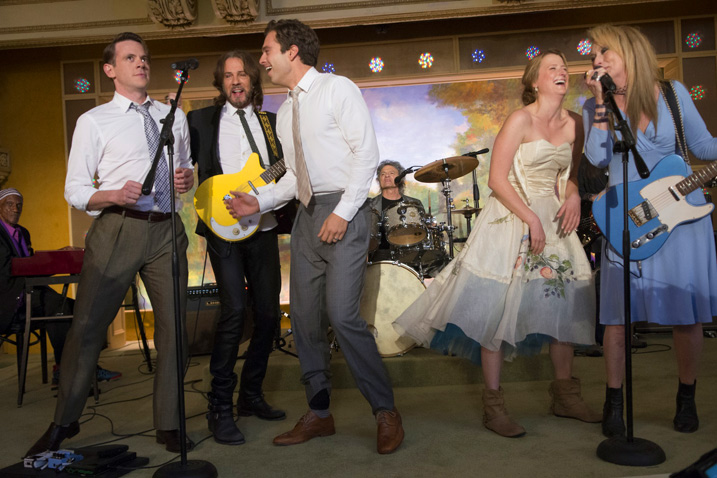 Just when the cycle of arguments grows tedious, “Ricki and the Flash” switches modes. A late night marijuana session back at the house finds Ricki performing an acoustic rendition of “Takes a Cold One to Know One,” an original composition that’s among the film’s standout moments. But once Pete’s wife sends Ricki packing, the movie finally develops into an engaging, compassionate portrait of a woman alienated by her aspirations. It’s here that Streep shows remarkable chemistry with Springfield, whose grizzled appearance and equally somber family history makes him a perfect match for Ricki’s troubled history. Demme allows their uneven romance to play out over the course of several songs, finding more subtleties in their relationship than words could allow.

Ricki’s entire backstory — leaving her domestic life to pursue a dream — mimics the film’s tension between a traditional melodramatic tropes and the more sophisticated process of exploring those same tropes through music. While often at odds with one another, those two forces ultimately synch up for a climax that threatens to turn cheesy at any moment but instead hits on an emotional clarity that most of the dialogue scenes lack. As usual, Streep doesn’t easily burrow inside her showy performance, but she certainly can sing.

It’s unusual to see a summer studio movie so enamored of music’s storytelling possibilities, but “Ricki and the Flash” joins “Trainwreck” and “Magic Mike XXL” in this summer’s trend of light fare with vibrant musical finales. This one stumbles more often than the others, but as with Ricki’s own troubled path, the songs carry it.

“Ricki and the Flash” opens nationwide on August 7.

This Article is related to: Reviews and tagged Jonathan Demme, Meryl Streep, Reviews, Ricki and the Flash