Review: Why 'American Ultra' Fails to Revitalize the Stoner Comedy 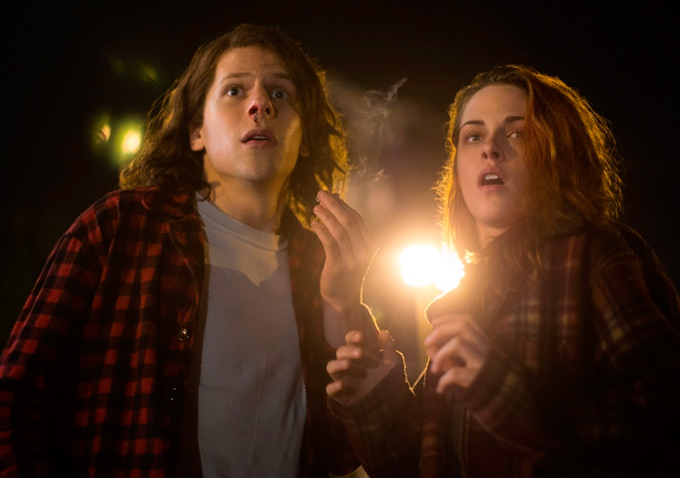 It’s appropriate that the plotline for Nima Nourizadeh’s “American Ultra” sounds like the sort of thing cooked up during a drug-fueled brainstorming session — “what if they were stoners, but also secret agents?” — and although it’s a mostly underbaked idea, the action-comedy repeatedly attempts to breathe new life into the stoner comedy genre. Screenwriter Max Landis’ basic narrative idea is furthered by ace casting, with Jesse Eisenberg and Kristen Stewart reuniting after the charming “Adventureland” to try their hand at another romance between sweet, if wholly directionless people. It’s that casting that really elevates the film, a meandering and well-meaning take on a Bonnie and Clyde story — albeit one with more illicit drugs and about as many guns — but it’s still not enough to make “American Ultra” really spark.

Set in sleepy Liman, West Virginia, a hamlet that appears to be populated entirely by stoner couple Mike (Eisenberg) and Phoebe (Stewart), the pair’s weed dealer (John Leguizamo, who deserves more screen time here) and an understandably bored sheriff (Stuart Greer), the film opens with the lovebirds attempting to fly the coop. Mike and Phoebe aren’t trying to escape Liman for some nefarious reason — that stuff comes later — but simply because they’re in need of a vacation. Unfortunately, Mike’s persistent panic attacks keep him from getting on the plane, and the film kicks off with a decidedly downbeat introduction. Mike and Phoebe are losers and, still worse, they know it. 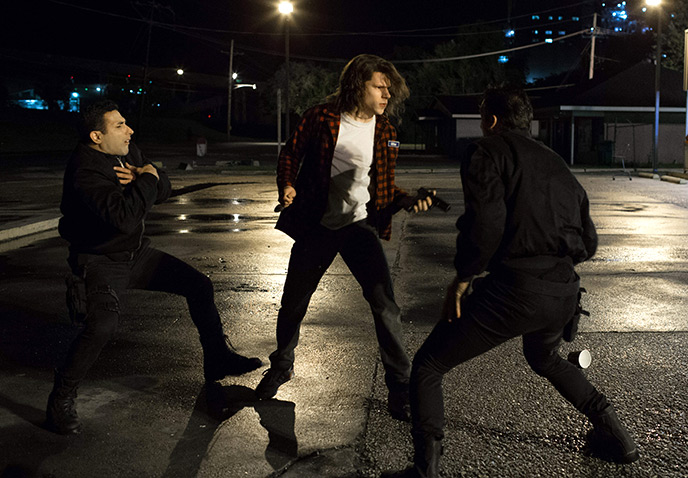 That’s about to change. Although the pair slip back inside their ho-hum world, one only brightened by their love (and Eisenberg and Stewart make their love story pop, it’s both sweet and sexy) and plenty of marijuana, outside forces conspire to upend their world. The film’s strong supporting cast includes Connie Britton and Topher Grace as a pair of dueling CIA managers who, unbeknownst to Mike and Phoebe, are battling mightily over their fate. The twist of “American Ultra” is one that figures prominently in its marketing and official tagline, but it arrives surprisingly late in the film: Mike isn’t really a loser, he’s a cut-loose CIA asset who is about to be knocked off by Agent Yates (Grace) and a fresh crop of actually homicidal killing machines.

As the “Tough Guys” assets descend on little Liman to take out a baffled Mike, his latent abilities — mainly, being able to kill people with a slew of unexpected items — start to sharpen, while Phoebe’s role in the entire thing becomes awkwardly (and purposely) fuzzy. “American Ultra” is surprisingly violent, and once Mike sets about defending himself against an unknown menace, the film ups its stylistic ante, resorting to snappy editing, a bevy of quick cuts and the sort of tone that wouldn’t feel out of place in a comic book movie (that Mike draws his cartoons for fun isn’t a coincidence).

That violence, while impressive for its ingenuity (at one point, Mike kills a man with a single spoon), doesn’t jive with the rest of the film, and although most of the murders are played for laughs, they’re never over the top or tongue-in-cheek enough to be funny, they’re simply at odds with the film’s otherwise low-key humor. The bone-crunching action and relentless blood-letting feels out of place, and as those sequences start appearing with more frequency, the film loses much of its rangy charm.

Landis’ script is woven through with plenty of clever bits that only click once the majority of the film’s 95-minute running time has slipped by, and tossed-off comments, such as Mike’s claim that he “literally” doesn’t remember life before Phoebe and Phoebe’s Zen-like understanding of Mike’s dumbest foibles, only make sense as the film cruises toward its conclusion, a bloody sequence that amusingly resembles the end of last year’s gory “The Equalizer.” It could all stand a touch more attention and expansion, and the film’s maddeningly undercooked backstory — while not enough to inspire the sequel set-up that ends the feature — is rife with loose ends and lingering questions.

For its first half, “American Ultra” feels like a close cousin of “Pineapple Express,” playing up the relationship between the protagonists and how their bond is strengthened by their mutual affection for marijuana. It’s not the deciding factor in Phoebe and Mike’s romance, but it’s a big part of it, and the lackadaisical trajectory of their relationship reflects their happy consumption of mind-altering substances. The film meanders and moves along slowly, doling out little details and important facts with a laidback eye, until everything suddenly bursts with violent situations that Mike and Phoebe are poorly equipped to handle. But while films like “Pineapple Express” and the Cheech and Chong series kept up that gag for most of their runtime, “American Ultra” attempts to shed it to make a hybrid strain: a stoner comedy blended with shots of action and bits of gore that harsh its otherwise enjoyable mellow, abandoning the tone and spirit that kept it shambling along for its early acts.

The ideas that inspired “American Ultra” are good ones, but they fade away too quickly, ephemeral as, well, you know.