'The Gift': A Great Thriller (Almost) Ruined By a Terrible Ending 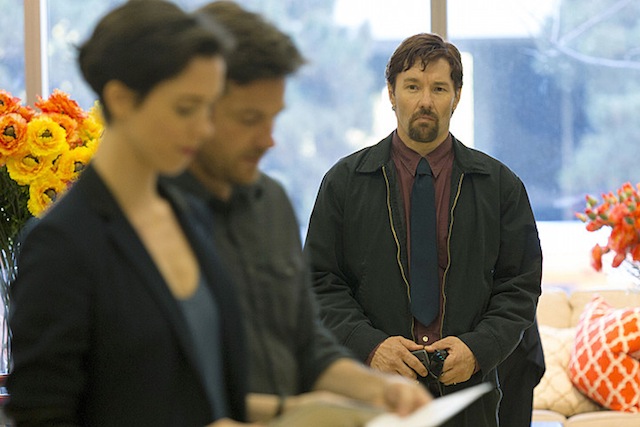 (This article contains spoilers for “The Gift.”)

As Criticwire noted last week, Joel Edgerton’s “The Gift,” whose main claim to fame had previously been an advance publicity campaign that edged close to crossing the line between generating viral buzz and outright stalking, has ended up being one of the best reviewed movies of 2015: It currently sits in 28th place on Rotten Tomatoes’ year-to-date ranking. And yet, once the opening weekend had passed, it became clear that “The Gift’s” ending was striking a seriously sour note with some critics and viewers, in some cases turning what had previously been admiration or enjoyment into white-hot anger.

Edgerton, making his feature directorial debut, is a sure hand behind the camera, slowly tightening the screws as the movie constantly shifts the audience’s allegiances, and even our sense of who the protagonist might be, as deftly as anything since David Twohy’s “The Perfect Getaway.” We start off sympathizing with Jason Bateman’s Simon, who’s just moved back near his childhood home to start a new job, and especially his wife Robyn, a designer who’s taking it easy as the couple recovers from a miscarriage and tries to conceive another child. And we’re creeped out by Edgerton’s Gordon, a high-school classmate of Simon’s who seems to be nursing a grudge over some mysterious past wrong (or perceived wrong). It’s a movie that can make you start at what might be the sound of a footstep in a light-filled California house, where you’re constantly aware of the edge of the frame and what might be lurking just outside it. Edgerton isn’t afraid of jump scares, but he doesn’t rely on them either, preferring to build tension slowly and even ambiguously, as we’re never quite sure whether the real threat is from Gordon or from Simon’s reaction to him.

And then, just as “The Gift” is lining up its knockout punch, the bottom falls out. By now, we’ve realized that, far from being a victim, Simon is and always has been a manipulative creep: in high school, when he started a malicious rumor about “Gordo the Weirdo” that ruined his life; and as an adult, where he manufactures evidence to sabotage his rival for a professional promotion. (Although “The Gift” doesn’t make much of it, there’s a neat resonance between Simon’s penchant for manipulating information and his job in the digital security sector.) We realize that he’s been gaslighting Robyn, and that he may even have been drawn to her in the first place because she’s a recovering addict and thus prone to self-doubt.

Simon was within an inch of having everything he wanted: A high-powered job, a beautiful wife who can be convinced to give up her career and raise the child she’s once again carrying in her womb. But as Robyn’s pregnancy comes to term, she starts to realize who Simon is, and that she wants no part of it. Still lying in her hospital bed after giving birth, she tells Simon their marriage is over, and he returns the last in the series of presents Gordon has been leaving at their house since the beginning of a movie — and that’s when things get really messed up. Along with a collapsible baby carrier, the package contains a DVD that shows Gordon creeping into the couple’s house, drugging Robyn into unconsciousness, and crawling into bed with her, with the implication being that he raped her and may even be the father of her newborn son. Just as Gordon had to live with the malicious rumor Simon started about him in high school, so Simon will have to live with the knowledge that his wife may have been raped, the “poison in your mind” that never goes away. Of course, Gordon says, he didn’t really go through with it. But maybe he did.

Our spoiler-averse culture doesn’t allow first-wave reviewers to discuss a movie’s plot in depth, especially one that relies on tension and twists as much as “The Gift,” but few of the critics who talked up the film even hinted that its ending might be booby-trapped. (ScreenCrush’s Matt Singer threw up a red flag, and The Playlist’s Katie Walsh warned that “Robyn, who is the emotional core of the film throughout, is reduced to a psychological revenge battleground between two men.”) But once opening night had passed, the gloves came off. The Mary Sue’s Rebecca Pahle wrote that after nicely maintaining the ambiguity of whether Simon or Gordon is the movie’s villain, “the twist resets ‘The Gift’ back to the same old territory. Creepy Gordo is a monster. And Simon still gets to be the victim. He may have been a bully who habitually lies to and psychologically manipulates his wife, but hey, he never sexually assaulted anyone! And he’s never confronted with the fact that his behavior is wrong, either…. And Robyn, who’s had the most development up to this point, gets demoted to an object that two guys can fight over.” At Comic Book Resources, Kristy Puchko said, “Edgerton concocted an interesting concept. He gave a compelling and creepy performance. His cast did a wonderful job of breathing life into these deeply flawed characters, ratcheting up the tension and drama to a dizzying peak. And then he chucked it all away with the kind of conclusion you’d expect out of brainless soap operas. He fouled the whole film in its final moments, leaving this critic disgusted.” And Flavorwire’s Jason Bailey concluded:

As far as twists go, it’s a pretty stupid one; as a critic friend noted in the lobby after a press screening, the film seems willfully ignorant of the existence of DNA tests. But even without that objection, it’s still a mighty seedy button to hang your movie’s hat on — yet another example of (usually male) TV writers and filmmakers using rape as a shock button that’s pushed too frequently, and too carelessly. In “The Gift,” it’s not creepy, and it’s not clever; it’s just plain cheap.

It’s also, one could argue, part of the tradition of domestic thrillers that “The Gift” seems to pattern itself after; “The Hand That Rocks the Cradle” uses a sexual assault as a plot point, to pick the most obvious example, while the narratives and tension of films like “Unlawful Entry” and “Sleeping with the Enemy” are doubtlessly fueled by the threat (explicit or otherwise) of rape. But they made those movies in a different time, and in a different culture, and for a movie like this to trot it out as some kind of crude, bullshit “gotcha” leaves an otherwise commendable picture with a decidedly sour aftertaste.

“The Gift’s” ending is a grievous misstep, and I wonder if it’s not the reason why the movie has been relegated to the dog days of August. But I don’t think it’s quite a catastrophic one. For one thing, it’s fairly clear that Gordon did not, in fact, rape Robyn. It wouldn’t fit the movie’s tone, which is uneasy but not utterly batshit, and it wouldn’t mesh with his intention, which is to visit on Simon the same kind of imaginary horror with which Simon plagued him in high school. If Simon were a more truthful person, Gordon points out, he’d be able to believe Gordon when he says he didn’t do it. But Simon has built his life on deceit, and simple trust is beyond his grasp. (You can argue, as some colleagues have, that it doesn’t matter whether Gordon raped Robyn, and that’s certainly true as far as “The Gift” exploiting the fear of rape as a plot device goes. But it makes at least some difference as to how we understand Gordon’s character, if only to know precisely what kind of monster he is.)

As for the climax stealing the focus away from Robyn, I’d argue that “The Gift” is consistently slippery about who its protagonist actually is. It’s a movie about points of view, about what we see and don’t see, in literal terms (What’s that shape in the dark?) and figurative. Edgerton frequently uses the trick of ending scenes in medias res and later making us question how they ended. After Robyn passes out in her house, the movie cuts to her waking up the next morning, and we assume she must have woken up just enough to drag herself into bed — an assumption the movie’s final minutes prove horribly wrong. Likewise, a confrontation between Simon and Gordon ends with the latter sprawled on the floor of a parking garage, humiliated but apparently unhurt. The next time we see him, he’s got cuts on his face and his arm in a sling. Did Simon do that?

In “The Gift’s” final shot, we see, through the blurred glass of a hospital door, Gordon shrugging off the sling as he walks away from the camera, and we remember that we don’t know him at all. We’ve been encouraged to see him first as a socially inept weirdo, then a menacing stalker, then a sympathetic victim of bullying, and finally some combination of the three: a monster, yes, but a monster Simon made. But has that vulnerability, too, been a trick to gain our sympathy? Perhaps he’s the one we should have been following, instead of a wealthy white couple with money and too much time on their hands — you know, the kind movies usually focus on. One of the few things we learn about Gordon is that he’s worked as a limo driver, and later a karaoke DJ: both facilitators of other people’s good times, rather than the subject of them. Just the kind of person, in other words, we might walk right past without noticing them, or casually injure and then go about our lives. But by the time the movie’s over, any chance of empathizing with Gordon has passed.

A rape scare is, to be clear, a pretty crude and queasy way to get us to the point; as Bailey and Pahle point out, it’s like something out of the misogynist domestic thrillers of the 1980s rather than a movie released in 2015. But if “The Gift” would have been a better movie without it, there’s still enough worth poring over not to let the bitter taste of the ending foul the entire thing.