This Week in Home Video: 'Far from the Madding Crowd,' 'Insurgent,' and More 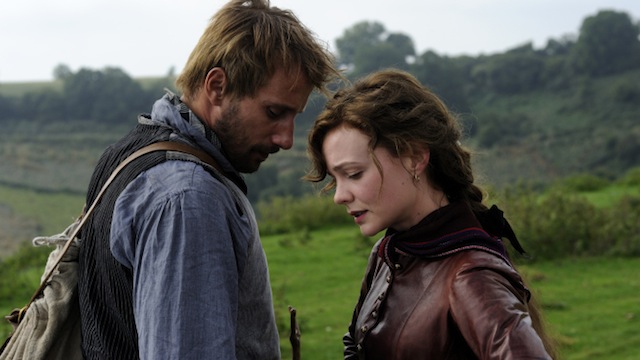 It’s a busy week for This Week in Home Video with British romances, YA adventures, journalism thrillers, box office bombs starring Tom Hardy, and more. First up, there’s Thomas Vinterberg’s Victoria-era “Far from the Madding Crowd,” a romance featuring Carey Mulligan as a farm owner who attracts three different suitors. An adaptation of the 1874 Thomas Hardy novel, “Far from the Madding Crowd” pivots on the fierce independence of Mulligan’s Bathsheba, who insists she doesn’t need a man, or anyone else for that matter, but as the world changes around her, her resolve naturally crumbles in the face of genuine affection. Director Thomas Vinterberg is best known for his work in the Dogme 95 movement, especially his 1998 film “The Celebration,” the first film created under the Dogme 95 rules, but with “Far from the Madding Crowd,” he employs a clear, direct style of filmmaking, relying on his facility with actors to drive the film. “Far from the Madding Crowd” has garnered mostly positive reviews, with many critics highly praising Mulligan’s performance, but some find the staid nature of the film to be a drawback.

Other releases include “Insurgent,” the second film in the “Divergent” series, an adaptation of the Veronica Roth YA series of the same name. “Insurgent” boasts an all-star cast, including Shailene Woodley, Theo James, Octavia Spencer, and Miles Teller. Though the film may only be a fans-only proposition, possibly because they may be the only ones who understand the film’s plot, it was nevertheless a commercial success grossing $295 million worldwide. We also have “True Story,” the story about the relationship between disgraced reporter Michael Finkel and murderer Christian Longo based on Finkel’s memoir of the same name, and “Child 44,” a huge box office bomb about a serial child murderer in the Soviet Union starring Tom Hardy and Gary Oldman.

As for independent releases, there’s Alan Rickman’s period drama “A Little Chaos,” a film about King Louis XIV’s reign in France, landscaping, grief, and romance, which certainly promises nice costumes and telegraphed melancholy. Then, there’s “Adult Beginners,” starring Nick Kroll, Rose Byrne, and Bobby Cannavale, about a young entrepreneur who’s forced to move in with his pregnant sister and her family after his company crashes and burns. Finally, there’s “The Salvation,” starring “Hannibal’s” Mads Mikkelsen as a peaceful Danish settler who revenges his family’s murder and angers the town’s local enforcer (Jeffrey Dean Morgan) who wants his blood.

On the classic front, Criterion is releasing Jules Dassin’s classic film noir “Night and the City” on Blu-Ray. Shot in London, “Night and the City” is about an American hustler who hatches a scheme to trick an aging wrestling champion into pitting his young protege against his estranged son. Warner Bros. has two Blu-Ray releases this week: Joe Dante’s “Innerspace,” starring Dennis Quaid as a naval aviator who volunteers for a miniaturization experiment and is accidentally injected into a grocery store clerk (Martin Short); and the family film “Free Willy,” about a troublesome boy who becomes emotionally attached to a captured orca. Finally, Kino’s releasing the John Berry 1951 crime drama about a petty thief (John Garfield, in his last film role after refusing to name names before HUAC led to his blacklisting) on the run after a botched robbery, as well as “Storm Fear,” “Big House U.S.A.,” and “Foreign Intrigue.”

“Far from the Madding Crowd”
Criticwire Average: B+

Hardy;s novel tells this story through all five of those characters, with roughly equal stature accorded to each. There’s no way to accomplish that kind of depth in a two-hour adaptation (the 1967 film ran three hours), so Nicholls pares things down considerably, reducing Fanny in particular almost to a cameo. As a cinematic condensation, it mostly works, even if the pace sometimes feels a bit frantic. Vinterberg shoots simply, prioritizing performances over the merely picturesque, though he lets some handheld Dogme-style jitteriness intrude during moments of great agitation. He also nails the famous scene in which Sergeant Troy woos Bathsheba with a demonstration of swordplay as foreplay, passing his allegedly dull blade repeatedly within centimeters of her body before revealing that he could have flayed her alive. It’s the movie’s one display of dazzling showmanship, each cut as perfectly judged as Sergeant Troy’s thrusts; when Bathsheba practically has an orgasm while standing there being almost-filleted, it’s very clear why. Read more.

That “Insurgent” and its predecessor prove to be at least halfway decent diversions is primarily thanks to leading lady Woodley’s ability to fully commit to her character’s internal journey as she eventually evolves into a self-sacrificing savior figure after being riddled with guilt and grief while summoning the sympathies of the audience. If Woodley is anything, besides being believably kick-ass, she is a world-class weeper (a skill she first displayed by wailing at the bottom of a pool as George Clooney’s daughter in “The Descendants”). Here, she nails both the single-tear trickle and full-out downpour splendidly. Read more.

Here’s where it’s important to point out that True Story is a true story, so watching the reporting that goes into writing the book True Story is a something of a truth-seeking ouroboros. The difficulty in speaking declaratively about others’ intentions is made evident in the scene where Longo surprises everyone by pleading guilty to some of the charges, thus rendering the sample chapters Finkel sent in for his book proposal potentially moot. If this all sounds like red meat for philosophers and ethicists at the movies, it certainly is. It doesn’t, unfortunately, make for crackling cinema. British theatre director Rupert Goold, making his film debut, has a cold touch. No one in the film is particularly likeable, and while the global implications about epistemology are interesting, the specifics of this particular case, at least rendered here, are quite dull. Making matters even worse is the casting of James Franco. I’m completely on board with Franco-as-clown in movies like The Interview or Oz the Great and Powerful, but I’m basically ready to throw in the towel when it comes to dramatic roles. During his big, allegedly chilling witness stand monologue, I found myself unable to listen to the content of his words, as I was too distracted by the mawkishly simian faces he was making to punctuate each passage. Read more.

Gloomy, dishwater gray, and often framed through dusty glass, “Child 44” wastes no time announcing itself as a capital-S Serious movie that doesn’t have a clue what it’s supposed to be about. Stalinist paranoia, marital anxiety, and a serial killer figure in the murky plot, done no favors by Daniel Espinosa’s inert direction. The look is leftover “Tinker Tailor Soldier Spy”; the pace is mind-numbing. Tom Hardy stars as Leo Demidov, an officer in the MGB, the precursor to the KGB. It’s 1951 in the Soviet Union of the Cold War-era imagination, where everyone speaks with a different Russian accent and no one can pronounce a single name right. This is, in other words, a rhetorical Soviet Union, rather than a historical one. Here, no one lives in communal apartments or drinks tea or uses diminutives or patronymics when addressing each other. They do, however, live in perpetual fear of submachine-gun-toting secret police — who, truth be told, seem to be terrible at being secret — and say things like “Murder is a strictly capitalist disease” and “Joseph Stalin, the father of us all” without a trace of irony. Read more.

This Article is related to: News and tagged A Little Chaos, Adult Beginners, Child 44, DVD / Blu-Ray, Far from the Madding Crowd, The Divergent Series: Insurgent, The Salvation, True Story