This Week In Home Video: 'The Knick,' 'Hot Pursuit,' 'Unfriended,' and More 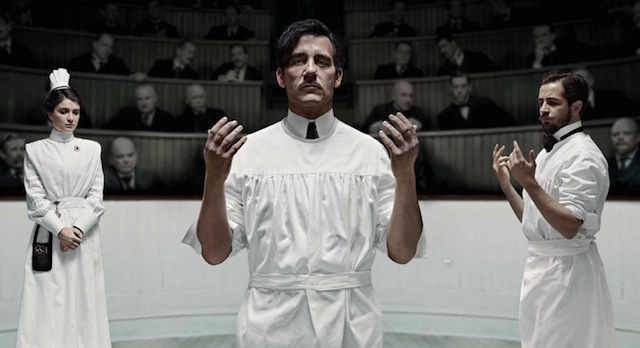 This week in home video features a Steven Soderbergh-directed TV series, a buddy road comedy, a horror movie set on a computer screen, and one of the absolute best films of the year (available through iTunes). Leading things off this week is a Blu-Ray/DVD release of the Cinemax TV series “The Knick,” directed, photographed, and edited by Steven Soderbergh. “The Knick” follows Dr. John W. Thackery (Clive Owen) and the staff at Knickerbocker Hospital during the early 20th Century. The series garnered widespread critical acclaim for Soderbergh’s visuals, and though the subject matter can often be gory or unpleasant, it’s an emotional look at the nascent progress of medicine. The second season of “The Knick” premieres this October on Cinemax.

Other new releases this week include the Reese Witherspoon-Sofia Vergara buddy comedy “Hot Pursuit,” a film described by The New York Times’ A.O. Scott as two women who “head across Texas, mocking and humiliating each other on the way to mutual appreciation.” Next, there’s “Unfriended,” an inventive horror film that takes place entirely on a laptop screen, utilizing everyday applications like Skype and Youtube to instill fear in the audience. Finally, “Mad Max: Fury Road” is now available to buy on iTunes; though it’s not an actual home video release, we at Criticwire would be remiss if we didn’t highlight it simply because it’s one of the best films of the year bar none.

And yet “The Knick” remains head and shoulders above television’s recent outpourings. While Amiel and Begler have structured a routine drama, Soderbergh can’t help wedging his personality into it. The opening frames declare his authority: a shallow-focused POV shot of Thackery’s feet in white Balmorals lying crossed in an orange-hued opium den. Then Cliff Martinez’s anachronistic synthesizer score kicks in, as the doctor self-injects cocaine in the back of a carriage, every detail of the procedure captured through a series of rapidly edited close-ups. As in “Haywire” and “Side Effects,” Soderbergh mixes an over-saturated color palette with a cool emotional tone (one reason the soapy dialogue feels so blunt). “The Knick” is fueled by an economic understanding of shots as narrative data, so that every composition and edit feels methodical and essential. In a mid-season episode, unruly ambulance driver Tom Cleary and nun with a dark side Sister Harriet sit down at a local bar. As they finally come eye to eye, Soderbergh shoots their conversation as Ozu-like portraiture. Later, Thackery presents a new surgery technique to a colleague after two straight days of research (plus prostitutes and cocaine); the camera circles around them in a manic handheld long take, matching the doctor’s own delirious state. Soderbergh’s style isn’t just a grab-bag of showy devices – his craft adds dimensions to the characters that are absent from the writing. In the pilot, Soderbergh transitions between conversations by gliding his camera in an Altman-esque tracking shot, heightening the sense of the hospital as a community. His most ambitious gambit comes at the end of the third episode: for a back-alley brawl with a drunk Edwards, he achieves a thrilling “you-are-there” feeling by attaching a camera rig close to the actor. The muted sounds bring us into the character’s internal reverberations. Read more.

It actually starts off well enough, with an inspired opening-credit sequence in which we see Witherspoon’s character, daughter of a cop, basically being raised in the back of a squad car. It’s a clever device, sold by the remarkable parade of young Witherspoon lookalikes, but you get an idea where this whole thing’s headed by the time they arrive at the first “joke”: a beautiful prostitute is placed in the back with her, and when she opens her mouth (you won’t believe this), a deep male voice comes out. That’s the kind of gag that might’ve garnered a surprise laugh, I dunno, 30 or so years ago, making it an appropriate note to begin a picture in which every single element — the premise, the writing, the direction, the acting, the telegraphing of the overcooked score, the car chases, the drug-dealer subplot, the half-assed romantic interest, the wacky outtakes over the end credits, the climax that dispenses with the jokes altogether and plays the action straight-up, as if anybody gives a shit — conspires to make it feel like a movie you rented one lonely Saturday night back in 1987 and immediately regretted. Read more.

Broken down to its essence, “Unfriended” is a slasher movie, a revenge flick about a bunch of faintly unlikable kids being harassed by someone who knows what they did last April. It’s the execution, the sheer formal ingenuity, that will make horror buffs reach for the “like” button. The film turns the quirks and glitches of modern technology into tools of the scaring trade. Every frozen webcam image generates suspense, every interruption of the video feed is a strategic blackout. (For once, it’s not hyperbolic to use the expression “pinwheel of death.”) The innovation extends to the film’s narrative tricks, too, as director Levan Gabriadze and screenwriter Nelson Greaves shrewdly dole out exposition through their main character’s browsing habits. Instead of flashbacks, there are guilty peeks at the “see friendship” section of Facebook. Instead of the customary third-party expert, brought in to explain the horror that’s happening, there’s an ominous message board. In one of the movie’s slyest moves, information regarding the dead girl’s traumatic past is subtly revealed in a chat window, as someone waffles about what she wants to say, typing and retyping the words until she finds a suitably cryptic explanation. Read more.

Viewers raised on the more baroque, digitally enabled forms of blockbuster spectacle are likely to admire the relative simplicity of “Fury Road,” while aficionados of the traditional slam-bang methods will revel in its coherence. Even in the most chaotic fights and collisions, everything makes sense. This is not a matter of realism — come on, now — but of imaginative discipline. And Mr. Miller demonstrates that great action filmmaking is not only a matter of physics but of ethics as well. There is cause and effect; there are choices and consequences. There is also enormous pleasure in watching those consequences play out, and in encountering surprises along the way. Not twists — the plot moves from Point A to Point B and back again, ending up pretty much where you knew it would — but kinks and swerves, tricks of perspective and playful reversals of expectation. A sweet, almost wordless romance blossoms between a hapless war boy (Nicholas Hoult) and one of Joe’s brides, as she and her comrades evolve from eye candy into a feminist guerrilla force. They are joined by a band of older women called the Vuvalini, who along with Furiosa, decide to give Immortan Joe’s patriarchy a taste of its own medicine. Read more.