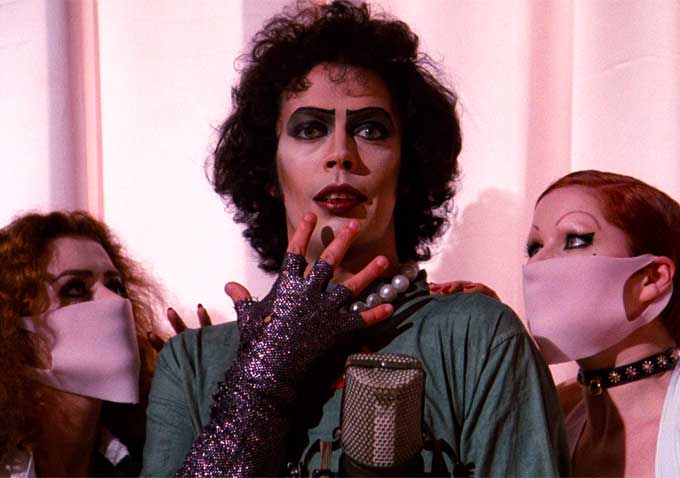 READ MORE: 9 Cult Films That Deserve a Television Prequel Series
“Michael Rennie was ill / The day the Earth stood still / But he told us where we stand. / And Flash Gordon was there / In silver underwear, / Claude Rains was the Invisible Man. / Then something went wrong / For Fay Wray and King Kong, / They got caught in a celluloid jam. / Then at a deadly pace, / It came from Outer Space, / And this is how the message ran…”
The opening lines to “The Rocky Horror Picture Show” reference American low-budget productions in the horror-sci-fi genre that were made between the 1930s and 1950s. Michael Rennie starred as an alien visitor in “The Day the Earth Stood Still;” Flash Gordon, who originated as a comic strip hero in the 1934, became a film franchise by the end of the decade; Claude Rains had a breakthrough performance as the titular Invisible Man in 1933 and Fay Wray portrayed the equally iconic female lead of RKO’s “King Kong” in the same year.
When “The Rocky Horror Picture Show” first premiered as a stage musical in 1973, it was lauded by critics and theatergoers alike for its satirization of this niche, B-movie subgenre of film. With music, lyrics and book written by Richard O’Brien, it is chock-full of homages such as the ones in this opening verse. It wasn’t until the release of its film adaptation, however, that the “Show” formed its truly one-of-a-kind connection to the films it celebrates.
Produced and directed by Jim Sharman, the same man who brought it to the stage, “Rocky Horror” premiered on the big screen in London 40 years ago today. After its subsequent limited release in the U.S., the film faced withdrawal from theaters due to its dismal failure at the box office. Since then, it has developed into an unprecedented cultural phenomenon with the longest-running theatrical release in film history.
The answer to its transformation lies in the shift from its failed original release to its revival in the form of midnight screenings in urban locations. Those who may have missed the film in its original run began attending these midnight screenings on a regular basis, forming fan bases in New York, Los Angeles and elsewhere. These fanbases in turn formed their own traditions, beginning with dressing up as characters in the film and really taking off when, as legend has it, a certain schoolteacher by the name of Louis Farese Jr. yelled, “Buy an umbrella, you cheap bitch!” at the screen, addressing Janet (Susan Sarandon), who was too busy protecting her hair from the rain with a newspaper. Since that fateful screening, each revival theater has been building its own line callback repertoire for these midnight screenings.
It is a unique irony of the film that it owes its success to such midnight traditions, as midnight screenings were originally a viewing platform for the very same horror-sci-fi genre that the film parodies. Originating with television in the 1950s, midnight movies were first shown as late-night programming by local television stations or as “B-movies” due to their assignation as the lower-budgeted, under-publicized film to screen at double features. These productions had a notorious reputation. Made in the Pre-Code era of Hollywood, before the regulation of censorship, many were exploitation films (such as Tod Browning’s “Freaks”), while others were sexually explicit or mere art films that challenged the sensibilities of mainstream Hollywood.

Even the larger studio features made in the 1950s had a rebellious quality about them, as they used science fiction to transcend the suffocating Cold War setting to make some larger metaphors about war and the human race. The two ’50s films mentioned in the opening lines of “Rocky Horror,” for instance, both feature aliens who come to Earth and teach us a lesson about violence and xenophobia. It makes sense, then, that in 1970s, these seemingly forgotten or unsuccessful films were brought back to theaters for midnight screenings as a facet of the counterculture movement, as well as of the “camp” revival. It is thanks to this practice that “Rocky Horror” got its re-release as a midnight movie and became what it is today.

In honor of the film’s 40th birthday, here are some of the traditions that have formed organically during the long midnight reign of “The Rocky Horror Picture Show.” These will vary from theater to theater, and we highly recommend experiencing them in person if you haven’t already done so. As Dr. Frank N. Furter (Tim Curry) would say, “Don’t dream it. Be it.” 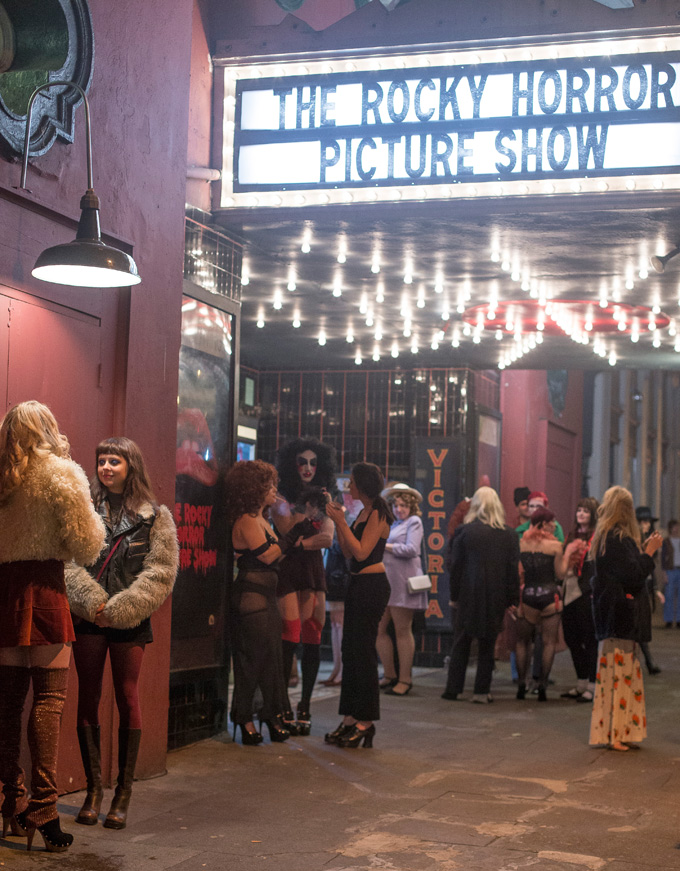 Pretty much the most important thing you need is fishnet tights. From there, you can go all out and buy the full cosplay on Amazon, or you can improvise your own look. Feel free to mix and match corsets, sparkly bow-ties and lacy aprons, wear glitter and foundation several shades too pale, and tease your hair until it takes up eight times its natural volume. (Don’t forget to spray heavily for a long-lasting hold.) If you really want to commit, you should dye your hair and impress all your friends. You get additional points if you dress up as a character of the opposite gender — however you wish to define that. There is only one rule and that is no nudity. Yes, we know — this belies the raunchy spirit of this cult gathering. But, unfortunately, midnight runs can get shut down if fans start showing up with nipples a blazin’.

This custom, one of the odder ones in the “Rocky Horror” pantheon, can put off first-time viewers, as it may sound intimidating and embarrassing. However, there are no ill intentions on the part of the cast and all is executed in good humor. If nothing else, it can serve as a metaphor for the loss of innocence required to participate in this kind of underground cult scene. It likewise reflects Brad and Janet’s experience when they stumble into the Annual Transylvanian Convention and learn, in between faints, of the Time Warp.

“It’s just a jump to the left… And then a step to the ri-i-i-ight! / Put your hands on your hips… And pull your knees in tight!

There’s not much to say about this tradition that can’t be said by singing along. The steps are easy enough, and you can follow along with both the shadowcast and the actors onscreen. Do it by your seat if the theater is too packed to move, but ideally you’ll want to push your way to the aisles to maximize on dancing space. A few pelvic thrusts and a mind flip will send you falling through the time slip and back into the 1970s.

This tradition probably varies most drastically between cities and individual theaters. With each screening location developing its callback script over years and years of repeat viewings by regular returning audience members, there are still a few lines that are accepted among theaters worldwide. Though it is difficult to confirm what these lines are without traveling from city to city to compare and contrast, it is safe to assume that whenever Brad’s (Barry Bostwick) name is mentioned, or his vacuous appearance simply calls for it, you can yell “ASSHOLE” at the screen. A similar rule applies to Janet with the word “SLUT.” In addition, any line that can be made overtly sexual by replacing a word or two should definitely have this done; references to orgasms, bodily fluids and genital areas are especially welcome. Traditions and history aside, you can always feel free to throw in a new callback line and see if it sticks.

If you wish to prove your true devotion to the cult experience of “Rocky Horror,” you must come prepared to the midnight screenings. Here are some props that may come in handy:

Rice for wedding scene; water guns for the storm scene and newspapers to protect your hair (like Janet); flashlights, candles, matches, lighters or just your phone for the “There’s a light” verse of “Over at the Frankenstein Place” (bring the most flammable equipment possible, but respect the theater’s safety restrictions; noisemakers with which to join the Transylvanians’ applause at the end of Frank’s creation speech; confetti for when Frank and Rocky retreat to their bedroom; toilet paper (ideally of the Scotts’ brand) for when Dr. Scott appears in the lab to Brad’s surprise (Great Scott!); toast for when Frank proposes a drink toast over dinner (butter it if you’re feeling particularly vindictive); party hats so that we can all get on Frank’s level.

This one’s pretty self-explanatory. Denny’s is open 24-hours. Go get a pancake. According to this “Rocky Horror” fan quiz, you aren’t a true fan until you know the menu by heart and have preferably been thrown out of the diner at least once.

This Article is related to: Lists and tagged Susan Sarandon, Tim Curry