'Black Mass' First Reviews: Johnny Depp Is Back, Though You May Not Recognize Him 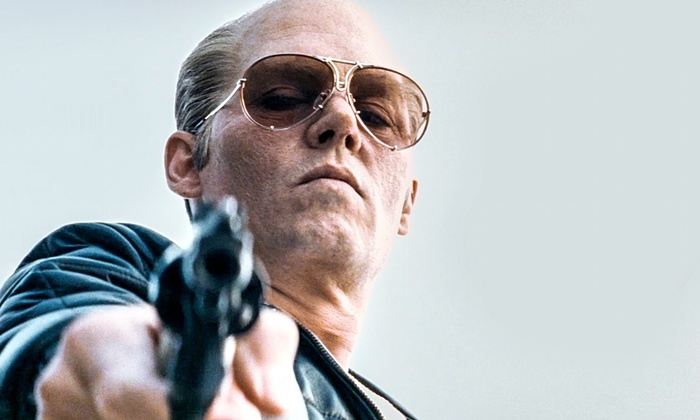 “Black Mass,” the true-life tale of notorious Boston gangster James “Whitey” Bulger, heads into the festival season primarily as an awards vehicle for Johnny Depp, who at times is almost unrecognizable beneath the latex prosthetics he dons for the role. (If anything, he looks most like Depp’s Hunter S. Thompson in “Fear and Loathing in Las Vegas.”) But the first reviews following the film’s premiere in Venice — like so many movies, it’s headed next to Telluride and Toronto — suggest there’s more to it than an Oscar campaign. Although like so many gangster movies it seems to find little time for female roles — Sienna Milller’s part as Bulger’s girlfriend, Catherine Grieg, was entirely excised, and Julianne Nicholson, Dakota Johnson and Juno Temple aren’t mentioned much  — a cast that also includes Benedict Cumberbatch, Corey Stoll, Kevin Bacon, Adam Scott, Jesse Plemons and Peter Sarsgaard is not lacking for hard-boiled talent. Beyond Depp’s coiled performance, which some critics suggest they’ve been waiting for since as long ago as 1997’s “Donnie Brasco,” “Black Mass” would seem to offer few surprises — not surprisingly, it strikes a few critics as a retread of Martin Scorsese’s “The Departed,” which was partly inspired by Bulger — but if you’re a Depp fan who’s been let down by his reliance on over-the-top franchise roles, “Black Mass” could be just what you’re looking for.

Scott Cooper’s “Black Mass” is a big, brash, horribly watchable gangster picture taken from an extraordinary true story and conceived on familiar generic lines. Johnny Depp’s south Boston wiseguy James “Whitey” Bulger, with his shaven bald head and weird blue eyes is a fully accredited sociopath with a groany deep voice like Ray Liotta in “GoodFellas.” He even has a “Funny, how?” moment like Joe Pesci from the same film: kidding around and persuading his corrupt FBI associate over dinner into divulging the secret family recipe for his steak dish — then turning very nasty about how easily his dining companion can be induced to spill the beans, and then uproariously pretending to have been kidding once everyone around the table has turned white with shock.

But Cooper and his screenwriters Mark Mallouk and Jez Butterworth have something substantial to add to the genre: making the point that gangsters do not arise from nowhere like comic-strip supervillains. They are the symptoms of political corruption, parasites created by agencies of the state, and by weak, credulous law enforcement officials who are content to sub-contract policing to the bad guys.

After too many Caribbean vacations Johnny Depp finally gets back down to some serious business in “Black Mass,” a major league real-life gangster film loaded with ripely presented murders, beatings, betrayals and vengeance-takings, all backed up by a deep-secret arrangement between Boston’s top-dog criminal and the FBI. Even if director Scott Cooper ‘s jump into big-time studio filmmaking feels familiar and derivative in some respects, he has taken care to borrow only from the best, and a top-notch cast socks over the many dramatic opportunities. Long-time Depp fans who might have lately given up hope of his doing something interesting anytime soon will especially appreciate his dive into the deep end here to personify genuine perfidy in the guise of legendary hoodlum James “Whitey” Bulger, the crime kingpin of South Boston from the 1970s until 1994, when he was forced to go on the lam for what ended up being 16 years.

Johnny Depp’s broodingly psychotic turn as convicted Boston crime lord James “Whitey” Bulger is not the only tasty thing about Scott Cooper’s tale of the unholy alliance between a South Boston Irish mobster and the FBI. An Irish-American “Goodfellas” shot in locations made familiar by TV series “The Wire”? Sure, but in the end, despite getting lost around its midpoint in the wilderness that so often besets multi-decade true crime stories, “Black Mass” shakes off such comparisons to become its own made man.

Depp hasn’t been this tamped down in a movie since he played second fiddle to Al Pacino in “Donnie Brasco”; even his Oscar-nominated J.M. Barrie in “Finding Neverland” seems a whirl of outsized tics and mannerisms by comparison. Even great actors (Nicholson and Pacino being among the perfect test cases) can fall back on indulgences and bad habits when they feel they’re giving the audience what it wants to see. But Depp is fully restored here to the daring, inspired performer of his early Tim Burton collaborations and “Dead Man,” knowing he is so deep inside the role that, whatever he does, we will come to him. The violence in “Black Mass,” when it comes, is swift and brutal, but nothing here is more startling than a single, sudden dart of Bulger’s eyes across a room.

Expectations of Depp are high on this one, now that audiences seem to have finally tired of his infamous cartoonish performances. The role of Jimmy presents a nice opportunity for some middle ground between those and his more ‘serious’ turns — this time he plays a gangster (like in “Donnie Brasco,” “Blow,” “Public Enemies”) and he can do his thing behind a mask. Pale, blue-eyed and bald — if not for the white tufts of hair seemingly about to take off from the sides of his head – he looks like “Goodfellas'” Ray Liotta in an advanced stage of transformation into Gary Oldman’s Dracula. Depp’s magnetism serves the character well, even buried underneath the glacial menace of a man whose mission in life seems to be the manipulation of others.

Cooper’s take on the gangster picture is so deeply beholden to great films that have gone before that you might find yourself mentally “correcting” it like a term paper, as though “Black Mass” were an exam to see how closely he has studied the greats. To be fair, it passes the test with flying colors — Cooper has revised hard, and at times skates so close to the kind of dizzy dark pleasure that Martin Scorsese’s gangster movies exude that it almost gets there. Amid a cast of ringers, beautifully costumed and caressingly photographed, who get to act with their real faces, Depp is encased in a helmet of make up and prosthetics make him look by turns ghostly, corpse-like, lizardy and sometimes like a literal incarnation of the devil, as when he menaces Julianne Nicholson in one creepy sequence. It makes him fascinating to look at, but maybe for the wrong reasons — ones that have nothing to do with the quality of his performance or the menace and charisma he exudes, and more to do with trying to locate the single element that almost, but doesn’t quite gel.

Gurgling, pasty and prosthetically uglified, Depp’s Bulger oozes a cadaverous anti-charisma, with a sharp nose, sunken eyes and withered hairline that give him the appearance of a kind of genetic splicing-gone-wrong between Jack Nicholson and Skeletor. But it’s hard to shake the suspicion that Depp is playing a type – almost as if he’s trying to replicate the kind of performance Nicholson might have given in the same role. You long for him to roll his sleeves up and grasp the character’s shape and soul himself, ideally without the aid of those distracting prosthetics, in the same way he did for Mike Newell in 1997, in “Donnie Brasco.” Worryingly, that’s how far back you actually have to go to find the last great, non-animated, “serious” Depp performance.

Depp is more engaging than he’s been in years, even if his performance can feel a little restricted and one-note. He’s joined by an eye-grabbing supporting cast including Kevin Bacon, Peter Sarsgaard and Juno Temple, as well as some more anonymous meatheads who play grizzled lieutenants on whose pock-marked faces you could play 18 holes of golf. But it’s Edgerton’s Connolly who most impresses and is the heart of this film. His swagger increases in line with the price tag of his suits; he’s harder to read; his tragedy is subtler; and his downfall is especially well-handled. It’s Bulger whose grim appearance and even grimmer behavior “Black Mass” indulges. But it’s the quieter, more complicated Connolly who offers the film’s subtler pleasures.

In its way, it’s a tour de force but one that ends up all too efficiently rebuffing the viewer, an effect aided by the fact that he seems to be wearing a good deal of facial prosthetics throughout, or is permanently in a wind tunnel, after lots of Botox — a man in a mask. Yet Black Mass, based on a painfully over-long true crime book of the same name by two Boston reporters, is another of those films firmly committed to the idea that gangsters are the most interesting people imaginable.

I think Johnny Depp is good in BLACK MASS, though it’s a case of one icy note being played consistently well. Not nearly career-best for me.