This Week In Home Video: Paul Feig's 'Spy,' Peter Strickland's 'The Duke of Burgundy,' and More 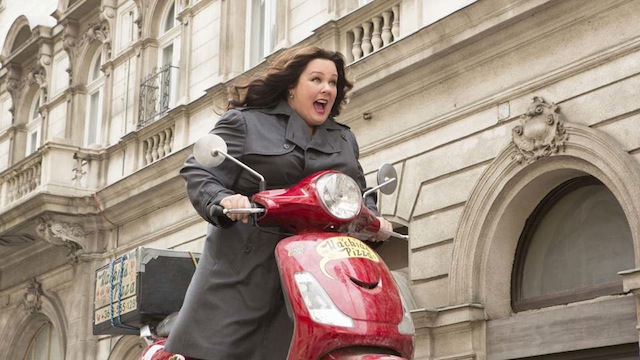 Let’s start with Paul Feig’s “Spy,” about an unlikely desk-bound CIA analyst (Melissa McCarthy) entering the field to stop the black market sale of a suitcase nuke. “Spy” continues Feig’s comedic collaboration with McCarthy, as well as his third directorial effort featuring female leads. Along with McCarthy, “Spy” also stars Jason Statham as super agent Rick Ford, Rose Byrne as criminal mastermind Rayna Boyanov, Miranda Hart as best friend and backup Nancy Artingsall, and Jude Law as Bradley Fine.  “Spy” garnered mostly positive reviews with many calling it a generous laugh-out-loud comedy that subtly critiques institutional sexism without ever once being didactic about it or hedging its genre premise. Feig is set to direct the “Ghostbusters” reboot coming out next year.

Other new releases this week include Peter Strickland’s “The Duke of Burgundy.” Both an tender love story and an homage to 70’s European softcore pictures, “The Duke of Burgundy” is best experienced cold as its cumulative emotional effect is dependent on the viewer’s initial confusion about the nature of the central relationship. However, suffice it to say that it stars Sidse Babett Knudsen as Cynthia and Chiara D’Anna as Evelyn, their purposefully imbalanced relationship, and the daily compromises each makes to sustain the love in their long-term relationship. “The Duke of Burgundy” follows through on the promise of Strickland’s previous film “Berberian Sound System,” and was a critical and festival hit. (Prepare for the film to be on critics’ top ten lists in a couple months, if that sort of thing appeals to you.) Then, there’s “Cop Car,” directed by Jon Watts (who will direct the upcoming “Spider-Man” reboot) and starring Kevin Bacon, about two boys who steal a seemingly abandoned cop car and get tangled in a situation bigger than the both of them. After that, there’s the Kris Swanberg film “Unexpected,” about a Chicago inner-city high school teacher (Cobie Smulders) who becomes unexpectedly pregnant and her friendship with one of her students (Gail Bean) who become pregnant at the same time. Finally, there’s Diao Yinan’s “Black Coal, Thin Ice” about a disgraced cop and his partner trying to discover the truth about the high-profile murders that ended their careers. Yinan won the Golden Bear award at the Venice International Film Festival.

On the classic front, we have quite a few important box sets this week. Kicking things off, we have “Five Films by Patricio Guzman,” which collects the work of the famed Chilean documentarian. Guzman chronicles his country’s troubled history from its peaceful socialist revolution and the violent counter-action, the legal case against General Pinochet, and even a portrait of Salvador Allende. The box set contains all three parts of “The Battle of Chile,” widely considered one of the best documentary films of all time, along with one of his newest films “Nostalgia for the Light,” connecting the work of astronomers with the lasting cultural effects of the Pinochet dictatorship. On the other side of the cultural spectrum, Warner Bros. has a 10-disc box set of films from Cannon Films, the masters of 80s low-budget genre exploitation fare. The set includes classics like Stallone-vehicles “Cobra” and “Over The Top” (you know, the one about the truck driver who become a champion arm wrestler to impress his son), and arguably the best Jean-Claude Van Damme film “Bloodsport.” It also includes the insightful documentary about Cannon Films, “Electric Boogaloo: The Wild, Untold Story of Cannon Films.” The last box set is “Masterworks from American Avant-garde Experimental Film 1920-1970” from Flicker Alley, which includes work from Stan Brakhage, Kenneth Anger, and Paul Strand. Finally, Criterion has two new releases this week: Leonard Kastle’s sole feature “The Honeymoon Killers,” about the desperate relationship between a lonely heart and a smooth-talking con man, and James Ivory’s “A Room with a View,” an adaptation of the E.M. Forester novel of the same name about a young upper-class Edwardian woman (Helena Bonham Carter) deciding her feelings between a free spirit (Julian Sands) and a priggish bookworm (Daniel Day-Lewis).

Not to give too much away about who does what with whom, but “Spy” treats sexual intrigue among its characters in an unorthodox way that I really appreciated — there’s not just one potential romantic partner for McCarthy’s character but several offered up at different points in the movie. Also unorthodox in a Hollywood film (though thankfully growing slowly less so) is the warm treatment of female friendship. Susan’s most important relationship may be with her work buddy Nancy (the wonderful Miranda Hart), a colleague back at CIA headquarters who’s now serving as the in-ear advisor for her in the field. By the time the delirious final action sequence arrives (Helicopter chases! Briefcases of diamonds! Statham in a speedboat!), Susan has not only proven wrong the boss (Allison Janney) who once doubted her crime-stopping prowess but also become an object of erotic interest to several other characters in addition to Aldo the horndog. “Spy” lampoons sexism without abandoning sex — a tough tone for a comedy to strike but one that Feig and McCarthy manage to accomplish with both a sense of justice and a sense of humor. Read more.

“The Duke of Burgundy”
Criticwire Average: B+

Underneath all the kinky weirdness, in other words, is a simple, deeply moving portrait of two people who love each other despite having some very different interests, and who actively work — not without a great deal of frustration and some occasional rancor — to make each other happy. Anyone who’s ever sat through an entire season of some dumb reality show for their boyfriend’s or girlfriend’s sake, or agreed to go hiking for a weekend despite hating the outdoors and physical exertion, or indulged a lover’s harmless but unappealing fetish, or really just been in a long-term relationship at all, should have no difficulty relating. In one intensely funny yet heartbreaking scene, Cynthia tries to tell Evelyn how much she loves her, only to have Evelyn request degrading dirty talk instead; the result is so halting and hesitant that Evelyn, after her orgasm, thanks Cynthia and then asks if she could maybe have a little more conviction in her voice next time? It’s not an obnoxious or petulant demand, but something that Evelyn genuinely needs, which Cynthia just may not be able to provide. Is love alone enough? Strickland strips away everything that would distract from that question, then places it in a context bizarre enough to slip past calcified assumptions. Against all odds, he’s made a romantic masterpiece that includes sober discussion of a “human toilet.” Read more.

Nothing that follows matches the stripped-down smarts of the opening act, and the promising premise never develops into a proper story. The sparseness starts to feel more like emptiness. The details of our nefarious sheriff’s scheme remain maddeningly opaque, and the movie, like the car itself, kind of just idles on the side of the road for the remainder of the running time. Watts seems to be shooting for the clockwork contraption quality the Coens brought to “No Country For Old Men,” but his screenplay is woefully short on mechanics. The relationship between the boys doesn’t deepen in the peril, and when all is said and done, we’re left knowing as much about them as we learned in the first scene. It’s no spoiler to say that “Cop Car” gets pretty ugly and violent, and Watts’ cruelty towards his characters leaves a sour aftertaste. The film eventually sputters to a glibly nihilistic ending that just pissed me off, squandering whatever goodwill was leftover from that auspicious start. Read more.

What gives this understated film real substance are the performances from its lead actresses. Smulders, who’s been a subtly capable supporting force in the Marvel movie world for years, radiates wisdom, confidence and heart, even in the midst of her character’s confusion. And she enjoys a lovely, effortless chemistry with Bean, who’s a real find in her first, major feature role. Bean has a magnetic energy about her, with a quiet strength and pure presence. “Unexpected” isn’t exactly earth-shattering cinema, but through its own honesty and grace, it’s eye-opening. Read more.