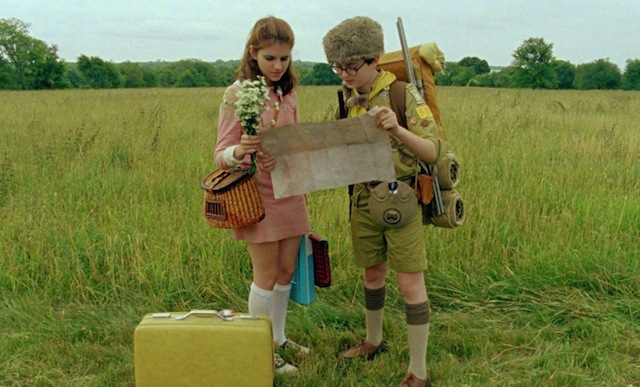 We’re filled to the brim with new and classic releases on this week in home video. We have a Blu-ray release of yet another great Wes Anderson film, a crowd-pleasing sequel that became the highest-grossing musical-comedy of all time, the 40th-anniversary released of a 1970’s classic, and “Zathura” on Blu-ray because why the hell not?

Let’s kick off with Criterion’s Blu-ray release of Wes Anderson’s seventh feature “Moonrise Kingdom.” A young love story set on a fictional New England island in the mid-1960’s, the film follows Sam Shakusky and Suzy Bishop (new comers Jared Gilman and Kara Hayward) as they escape from the trappings of the adult world to form their own private little camp on the outskirts of the island. But when Suzy’s parents (Frances McDormand and Bill Murray), Sam’s Scout Master (Edward Norton), and the Island Police (Bruce Willis) discover they’ve gone missing, they decide to bring them back to reality and end their relationship. Featuring Anderson at his warmest, both visually and narratively, “Moonrise Kingdom” is one of the best films of his career because it fully indulges in the director’s most whimsical tendencies to tell a full-on fable about young ambition and imagination. The Criterion set includes a DVD commentary featuring Anderson, Bill Murray, Edward Norton, Jason Schwartzman, and co-writer Roman Coppola, an original behind-the-scenes documentary, as well as a booklet containing commentary from young writers.

New releases this week include Elizabeth Banks’ box office smash “Pitch Perfect 2,” the sequel to the popular original about the Barden Bellas, an all-female a capella singing group. Though the film has Anna Kendrick, Rebel Wilson, and Brittany Snow reprising their roles, the film had a divisive critical response, with some praising the comfortable nature of the film and others criticizing its bombastic retread over previous territory. Then, Magnolia has Andrew Bujalski’s romance dramedy “Results” about a recently divorced, recently rich slacker (Kevin Corrigan) who moves to Austin from New York and upends the lives of two personal trainers (Guy Pearce and Cobie Smulders). “Results” is Bujalski’s most mainstream, star-studded, and visually sun-drenched project to date, but it still contains his wonderfully jaunty, secretly tender style. It also features Corrigan in his purest, funniest roles, as well as stand-out performances from Pearce and Smulders who arguably play two of their most nuanced characters to date. Finally, the Cohen Media Group is releasing André Téchiné’s “In the Name of My Daughter,” a retracing of the La Roux case in France in the ’70s.

On the Classic front, Warner Bros. has the 40th-anniversary edition of Sidney Lumet’s sweltering classic “Dog Day Afternoon,” about a botched bank robbery executed by a first-time crook (Al Pacino) for his wife’s sex reassignment surgery. “Dog Day Afternoon” is one of the best exercises in sustained tension as well as containing one of Pacino’s all-time greatest performances (not to mention a reliably fantastic performance from John Cazale as his partner in crime). Then, Criterion has two films from Australian director Bruce Beresford: first there’s historical drama “Breaker Morant,” about the court-martial of three Australian army lieutenants for alleged war crimes while fighting in South Africa, and second “Mister Johnson,” about a Nigerian villager (Maynard Eziashi, winner of the Venice Film Festival’s Silver Bear for best actor) eager to become a civil servant for the British authorities in hopes for a better life. Sony Pictures has two family-friendly films on Blu-ray this week as well: The 20th-anniversary edition of “The Indian in the Cupboard,” and the 10th-anniversary edition of “Zathura: A Space Adventure” (featuring a young Josh Hutcherson later of “Hunger Games” fame). Etiquette Pictures is releasing “The American Dreamer” on Blu-ray, a documentary about Dennis Hopper’s creative process while filming his 1971 film “The Last Movie”; it’s the first time this film is widely available for the public. Finally, Olive Pictures has the blaxploitation gangster classic “Black Caesar,” starring Fred Williamson as Tommy Gibbs, the leader of the black crime syndicate of the New York mafia.

“Moonrise Kingdom” is Anderson’s most completely satisfying film since the one-two of “Rushmore” and “The Royal Tenenbaums,” in part because it’s the perfect distillation of both. Like “Rushmore,” it’s about the infatuation and uncertainty of first love, as Gilman and Hayward work their way through a courtship that’s as sweetly naïve as it is devoid of technique. Their time at a beach inlet represents love at its most idyllic and untarnished — the isolated location is so pure, it doesn’t even have a name until they give it one. And yet, as with “The Royal Tenenbaums,” the disappointments of adulthood are equally apparent, clear in the loneliness that grips Norton and Willis, or the sour feelings that pervade a failed marriage. By contrasting young love with adult disillusionment, Anderson suggests a sad continuity that somehow doesn’t swamp the romantic optimism of Gilman and Hayward’s relationship. They’re runaways, after all. Maybe they’ll turn out different. As always, Anderson expresses himself concisely: At 94 minutes, “Moonrise Kingdom” is dense in minute visual detail, hilarious deadpan jokes, and small moments that are rich in complexity. Just the line where Gilman finally reveals his feelings for Hayward is simultaneously funny, disarming, and a piercing reminder of where he’s from and where he’ll likely end up when the carriage turns back into a pumpkin. (Anderson’s films, for this reason, consistently improve on multiple viewings. There’s too much for the eye to take in.) “Moonrise Kingdom” goes deep into the storybook world of Anderson’s imagination, but not so far as to prevent complicated human emotions from intruding. Gilman and Hayward’s unnamed islet can’t remain a secret forever. Read more.

As second rounds of comedies go, “Pitch Perfect 2” definitely is not perfect. Its script is more than a smidge pitchy. And there are at least two reasons to protest its treatment of Anna Kendrick’s Beca, the once outsider freshman who took the all-girl Barden Bellas to new competitive a capella heights in the sharp, sassy and sweetly humble original film that sprouted into an eminently re-watchable sleeper success mostly via DVD and cable in 2012. First, not only is the diminutive dynamo subjected to bouts of abuse about her lack of height in the form of two towering Teutonic twits from a rival group known as Das Sound Machine, now that the Bellas are competing on an international level. (Although her weird girl-crush on the intimidating Valkyrie-like female half of this bullying pair at least gives Kendrick something amusing to chew on). But on top of that, Beca’s very presence in the film has been shrunk. In fact, she spends much of her senior year guiltily sneaking off to an internship at a recording studio to pursue her dream of being a music producer instead of devoting herself to boosting her fellow Bellas. That also means less time cuddling with tenor Jesse (Skylar Astin), whose all-boy Treblemakers are now more cohorts than foes. The one upside: As her distracted boss, Keegan-Michael Key delivers a stellar slam against hipsterdom involving that mystifyingly popular sauce known as sriracha. Did someone forget how Kendrick helped to save the environment by teaching us a new way to recycle plastic cups the last time around and scored a “Billboard” top-10 hit in the bargain? Apparently so, since the country ditty “When I’m Gone” is briefly heard but sans percussive drinking ware. Perhaps clicking plastic spoons should have been considered. Read more.

But the plot remains snaky, ever-changing. The same goes for personalities. The characters all repeatedly surprise us with decisions that seem shocking at first but which only wind up deepening characters that refuse to be boxed in. They have flaws, contradictions; they make choices that seem made up in the moment, perhaps regretted and/or reneged upon later. Kat starts off abrasive and angry, always deploying f-bombs and telling people off; later she chills out, becomes more plaful. Trevor oozes the confidence of anyone who spends their life working out, but soon reveals a defeatism and shyness that’s shocking. Even Danny is always up for seeming less or more slovenly than he often appears. The actors are great at finding new parts to their characters, fleshing them out, never letting them settle. We’re used to movie characters with clean motivations, but “Results” is about real people trying to find new identities, be it through fitness, romantic pursuits or something else entirely. The same goes for the movie itself; it looks like a rom-com centered around a gym but by the end it’s so far afield it seems like something else entirely. If this sounds disastrous, then “Results” makes sense while it’s happening in front of you. You just have to follow it down the copious back alleys and detours it whimsically takes. In its seemingly unassuming way, it’s one of the weirdest and most thrilling films of the year. Read more.

“In the Name of My Daughter”
Criticwire Average: B

A few years ago, French filmmaker André Téchiné (“Wild Reeds”) made a movie, “The Girl On The Train,” that was superb in every respect save one: It was based on a true story. Rather than use the real-life incident (a young woman who falsely claimed she’d been the victim of an anti-Semitic attack on a commuter train) as the loose inspiration for a work of fiction, Téchiné doggedly stuck to the facts, whether or not those facts were dramatically compelling. Consequently, the movie, which is masterfully directed and gratifyingly complex, runs out of gas right when it ought to be revving up, stranding two great actors (Émilie Dequenne and Catherine Deneuve) in a scenario that crosses the line from ambiguous into inconclusive. Téchiné’s new film, “In The Name Of My Daughter,” suffers from exactly the same problem — which is immensely frustrating, because it’s likewise terrific right up until it’s forced to address what actually happened (or, in this case, what didn’t happen). Set primarily in the late 1970s, it explores the circumstances leading up to the mysterious disappearance of a casino heiress, Agnès Le Roux (Adèle Haenel), who was widely suspected to have been murdered by her lover, Maurice Agnelet (Guillaume Canet). But it doesn’t play like a true-crime saga, and anyone watching it with no foreknowledge of its subject will be blindsided when it suddenly leaps forward several decades to the elderly Agnelet’s trial, especially since the case was still ongoing at the time the movie wrapped. (It finally concluded last year, just a few weeks before “In The Name Of My Daughter” had its world premiere at Cannes; closing text fills in the blanks.) Read more.