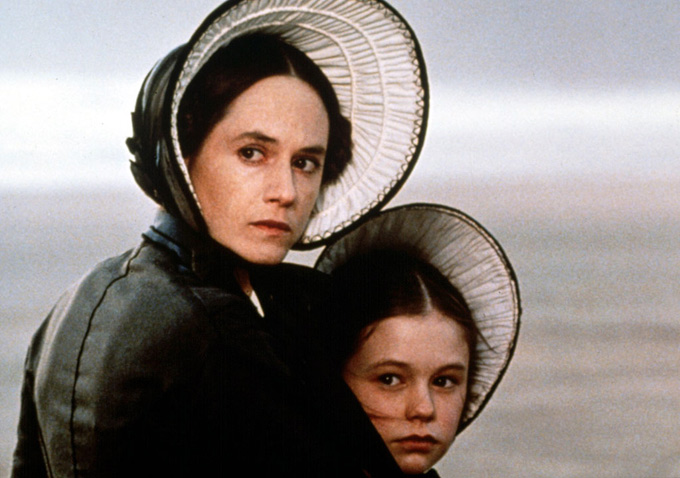 Many have described Ana Lily Amirpour’s acclaimed debut with these six words: Black-and-white Iranian vampire movie. And while that’s certainly true, it only begins to convey Amirpour’s wondrous vision. Set in the imaginary town of Bad City, the film stars Sheila Vand as a doe-faced goth who wears a chic striped shirt visible beneath her burkaas and prowls the town. Though her origins remain obscured as she trails various locals late at night, she quickly turns into the face of repression burdening all of them. After she forms a curious bond with the downtrodden Arash, the film moves beyond its elegant form and develops an emotional core. The plot specifics allow “A Girl Walks Home” to comment on the strict dimensions of Iranian society — its treatment of women and imbalance of wealth chief among them — in ways both abstract and profound.

Featuring breakout star Gugu Mbatha-Raw in a stirring period-set role, Amma Asante’s “Belle” shrugs off the typical trappings of historical dramas to present a fresh, fully realized and very bold look at life in 18th century England, all through the eyes of a woman living on the verge. Mbatha-Raw stars in the film as Dido Elizabeth Belle, the mixed race daughter of a high-ranking naval officer who is expected to balance two dueling fates — a life of apparent privilege that is often tested by the racist attitudes of people who otherwise offer nothing but respect to her well-conncted family — tenuous existence that comes to a head when she falls in love and makes it her mission to crusade for change. “Belle” is lush and vibrant, but it also hits emotional beats that don’t require any window dressing whatsoever.

Jafar Panahi’s political edge has never been more searing or devastating than in “The Circle.” The movie centers on the interconnected stories of several women in Tehran and paints a crippling portrait of how the country treats its female citizens. Be it a new grandmother who is upset to learn her daughter has given birth to a baby girl — she knows her son-in-law won’t be happy with such results — or a group of escaped prisoners whose attempt to flee the city are constantly upended by strict and sexist laws (i.e women aren’t allowed to travel alone), Panahi keeps the stories of female suffering spinning without any sense of closure or background. The result is a powerful wake-up call for international viewers that is impossible to shake.

“Felt,” Jason Banker’s visceral horror-thriller, finds artist Amy Everson starring in her own true story as a women who copes with a past sexual trauma by creating a grotesquely costumed alter ego that re-appropriates the male form. While embracing this side of her empowers Amy to be fearless and to protect herself, it soon takes on a life of its own and lashes out against her after she befriends a seemingly good guy. Exploring sexuality and combating rape culture, the movie results in a powerful feminist statement on the sanctity of female vulnerability and the ways in which it is preyed upon and corrupted by male aggression and superiority.

Céline Sciamma’s third feature confirms mastery over the coming-of-age drama, a genre too often reduced to its simplest ingredients. Heading up an all-black cast, Karidja Touré plays subdued teen Marieme, a low key girl who lives in a lower class Paris neighborhood with her warring parents and younger sister. The opportunity arrives for her to come out of her shell when a trio of local teens coax her into their gang, luring her with the promise of cute boys. Before long, Marieme has joined forces with the motley crew as they cruise shopping malls and threaten rival gangs on a freewheeling rein of terror, while Sciamma lets her actors do the dirty work. Touré’s transformation from a subdued, frustrated child of neglect to a young woman in control of her life provides the movie with a robust backbone as she grows increasingly rebellious and assertive.

In a world where female filmmakers are still fighting for equality and parity, multi-hyphenate Lake Bell is doing it for herself. Her Sundance hit “In A World…” features Bell’s writing, directing, producing and starring talents in a delightful skewering of both Hollywood culture and movie tropes. On its surface, it’s an amusing battle of wills between voiceover artists — and family members — but the film works on multiple levels, hitting both big laughs and smart emotional beats. Mostly though, it’s just one hell of an auspicious debut from recognizable supporting star Bell, who admirably and ably shows off what she’s capable of both in front of and behind the camera.

“Jeanne Dielman,” the magnum opus of the late Belgian avant-garde filmmaker Chantal Akerman, improbably holds the attention of its viewer for its entire four hour runtime. In this haunting dissection of domestic life, Akerman chronicles the daily existence of the titular widow, mother and prostitute. Day after day, Dielman cooks, cleans, invites a male client over and prepares dinner for her son. More than merely an exercise in repetition, the film demands patience and makes viewers acutely aware of the passage of time. Due to the unforgettable static cinematography of Babette Mangolte, we are familiarized with every corner of Dielman’s Brussels apartment and are afforded the responsibility as viewers to perceive every gesture and every minute detail in her routine. Over the course of the film, these minor changes, details most films plainly ignore, accumulate and reposition themselves as violent interruptions. Through the gradual disruption of her rigorous, unglamorous domestic routine, the life of Dielman becomes charged with tacit resistance, yielding painful and tragic consequences.

Written by Julia Hart and directed by Daniel Barber, this subversive Western changed the genre’s tune by putting the guns — and the power — in the hands of the ladies. Brit Marling, Hailee Steinfeld and Muna Otaru play three women trapped in the twilight of the Civil War. When two deranged AWOL soldiers close in on their farmstead, the women display incredible feats of resilience and strength to survive. In their world violence can only be combatted with violence. But despite the horrific acts they commit in the name of survival, the women remain centered, committed to one another and willing to rise to the challenge.

Equal parts hilarious and heartbreaking, “Persepolis” paints a memorable portrait of a strong, creative, independent woman in the face of repression. Based on Marjane Satrapi’s acclaimed graphic novel of the same name, “Persepolis” is in many ways a traditional coming-of-age story, jarringly set against the extreme context of a socially and politically oppressive society. Satrapi’s spirited animated autobiography chronicles the life of her younger self growing up in Tehran during the aftermath of the Iranian revolution. While “Persepolis” is undoubtedly an explicitly political film, it is also made accessible and lent heavy doses of humor through its clever and vivid graphic depiction. Seemingly as unfamiliar to this radical injustice as the viewer, Marjane becomes a proxy as she battles for her political, gender-based and artistic identity. Separated both from her family and her nation, the young Marjane stays fearless and outspoken throughout as she comes to terms with the political changes in Iran.

Jane Campion’s stunning portrait of a mute mother (Holly Hunter) and her daughter (Anna Paquin, in her first role) living in the outback of New Zealand encapsulates the nuanced strength and sensitivity of the female perspective. Hunter’s character, who expresses herself through the piano and communicates with the help of her sign-language-speaking daughter, is trapped in an arranged marriage devoid of love and lust; she sets her sights on someone else and experiences a haunting and erotic sexual awakening. Though it is a deeply feminist film, “The Piano” is above all a masterwork of subtlety, exposing the intricate network of human emotion that governs us all. It won three Academy Awards: Best Actress for Hunter, Best Supporting Actress for Paquin, and Best Original Screenplay for Campion. The film also won the Palme d’Or at the 1993 Cannes Film Festival.

Mitchell Lichtenstein’s “Teeth” premiered eight years ago and instantly achieved cult status for its feminist spin on horror film tropes (the scream queen isn’t the victim this go-around, thankfully) and its dark sense of humor. The film stars Jess Weixler as Dawn, a reserved purity rights activist who discovers there might be more to her than meets the eye after an attack from a boy at her school has deadly results. Initially befuddled, Dawn discovers that the myth of the vagina dentata, a cautionary piece of folklore about a toothed vagina, might not be fiction after all. Though the film isn’t for the faint of heart (the total appendage count rings in at three severed penises and at least four lost fingers), “Teeth” is a gleeful mash of slasher film, social satire and teen comedy whose sharp wit and even sharper pearly whites are sure to please any viewer who can stomach it.

Set in a staunchly patriarchal Maori village, this 2002 drama follows Pai (Keisha Castle-Hughes) a young girl who dreams of becoming chief of her tribe. Despite relentless protestations, the strong-willed Pai undergoes a series of tests meant to uncover the next tribal leader. Strongly determined and powerfully willed, Pai works to demonstrate strength and courage that transcends gender structures. Castle-Hughes’ powerhouse performance made her the youngest Oscar nominee for Best Actress, before being unseated by Quvenzhane Wallis in 2014. Filmed on the breathtaking coasts of New Zealand and featuring a stunning turn from Castle-Hughes, this feminist tale of hope and empowerment remains as moving now as it was upon its initial release.

This Article is related to: Features and tagged A Girl Walks Home Alone at Night, Belle, Felt, Girlhood, In A World, Jeanne Dielman, Lists, Meek's Cutoff, The Circle, The Keeping Room, The Piano