12 Haunting TV Homages to 'The Shining' 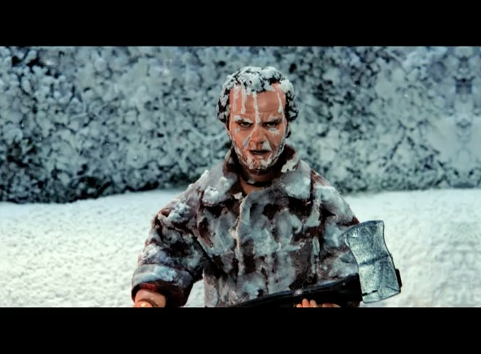 
Episode:“Checking In” (Season 5, Episode 1)
Grade: B
Synopsis: Anyone creating a horror story set in a hotel has to pay homage to “The Shining,” and that’s exactly what Ryan Murphy’s efforts to pay tribute felt like: a requisite rather than an opportunity to relish. Murphy’s 2015 season premiere borrowed from a number of classic fright fests, but its references to “The Shining” were largely overt, like twins at the end of a hallway and referencing a mysterious room no one should go inside. Of course, this being a Ryan Murphy show, there’s little to no build-up before we enter said room, but hey, at least the hotel is gorgeous. The carpeting is a nice (and somewhat subtle) nod, as are a few other ornate features. So “Checking In” fulfills its duty as a hotel horror show, but that’s about it.

Episode: “Crawl Space” (Season 1, Episode 2)
Grade: A-
Synopsis: Loren Bouchard’s hysterical animated comedy is loaded with references to “The Shining,” but usually in a direct, casual kind of manner (like spoofing the blood-flood elevator scene or mentioning “redrum” in conversation). Perhaps that’s because the Kubrick fan got his most impressive homage out of the way early; in the second episode of the series, to be precise. “Crawl Space” clearly calls to mind Jack Torrance’s hallucinatory journey to the hotel bar, where he first communicates with the hotel “staff.” After being trapped in a crawl space between his restaurant and upstairs apartment, Bob loses his mind a little bit and discovers a similar situation all his own. The main twist: Bob doesn’t want booze. He needs a bathroom.

Episode: “Sunset” (Season 3, Episode 6)
Grade: B+
Synopsis: Okay, so this one is pretty quick, but it’s also a lot of fun. Thematically, “Breaking Bad” and “The Shining” share quite a bit (you can read all about in an old article on Vulture which covers it all), but the main onscreen homage comes in “Sunset” when a previously unknown police officer is identified over the CB radio as KDK-12. This cop is sent to investigate the house currently run by the Salamanca twins — murderous, axe-wielding twins — who share a few connections of their own with characters from “The Shining.” But what tips attentive viewers off of what’s to come is the radio name, KDK-12. It’s the same code Wendy Torrance screams repeatedly into her own CB radio when trying to call for help from her haunted hotel. Simply put: after both uses of the call sign, someone had an ax coming their way. [Note: The above clip does not contain any “Shining” references, but we figured watching any of “Breaking Bad” was better than not watching any.] 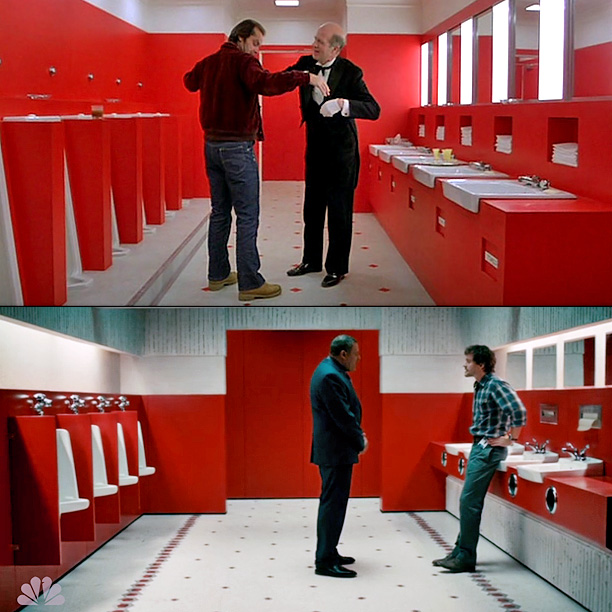 Episode: “Aperitif” (Season 1, Episode 1)
Grade: A
Synopsis: Establishing the dream-like nature of “Hannibal” was a key aspect to its world-building, and Bryan Fuller wasted no time in providing captivating visual cues for the audience. One such hint came in the pilot when Will Graham (Hugh Dancy) and Jack Crawford (Lawrence Fishburne) shared a discussion in a bright red bathroom. Turns out it was constructed to look exactly like the bathroom Jack Torrance and Delbert Grady shared a far more frightening conversation in — even if both ended in tragedy for one of the participants.


Episode: “Heeeeere’s Lassie!” (Season 6, Episode 11)
Grade: B-
Synopsis: Perhaps it’s that I never fully bought what “Psych” was selling, but this episode-long dedication to “The Shining” just never feels earned. It’s got all the references fans could hope for, but it still manages to feel more about commenting on them than appreciating their relevance. Or maybe it’s great, and I just don’t get it. There are, after all, a few well-staged (if timid) frights and at least a handful of jokes that work, making “Heeeeere’s Lassie!” an above-average episode of USA’s retired series (burn).


Episode: “Help Me” (Season 4, Episode 1)
Grade: B
Synopsis: This probably didn’t deserve to make the cut — especially considering the care and craftsmanship put into many of the other examples — but damn if that stop-motion Jack Nicholson isn’t hilariously spot-on; not to mention the dancing Scatman Crothers as a kicker. Like most of “Robot Chicken,” this was short, but oh so sweet.

Episode: “Uniform Behavior” (Season 2, Episode 9)
Grade: A-
Synopsis: Any excuse to bring up Nickelodeon’s best-ever animated series — Yes, it is! No, you’re wrong! — is one we have to take. That’s not to say the four credited writers don’t pay proper tribute to “The Shining,” though. Quite the contrary. When Heffer gets in a car accident, he’s forced to start working and chooses to be a security guard; a job that transforms him from a kind and gentle soul into a devout and angry obsessed protector. If that’s not enough for you, Heffer also patrols the long corridors on a red tricycle, runs into some creepy twins at the end of a hallway (who claim they’ve always worked there), discovers a mysterious bar willing to sell him a soda for his soul and slams his head through a door as the evil spirits haunting him yell, “Heeere’s Heffer!” It may not be the most subtle homage to “The Shining,” but it hits all the big moments in just the right ways.

Episode: “Treehouse of Horror V”
Grade: A
Synopsis: “The Simpsons” may take the cake for most references to “The Shining” of any show on TV. The long-running Fox comedy has tackled Kubrick’s horror film a number of times, from one-off lines to full-blown homages, making choosing the best a difficult task. Yet something about the above segment — a classic among fans of the show and the film — feels not only timeless but also oh-so-simply clever. Taking TV and beer away from Homer, trapping him in Mr. Burns’ mansion and, of course, the wild vocal performances and rich animation are all big decisions that lead to many small payoffs in between.

Episode:“Trespass” (Season 6, Episode 14)
Grade: A-
Synopsis: For a network show with a teen audience (primarily), this reference is a little more subtle. Lana gets trapped inside Lex Luthor’s mansion during a snowstorm with only a security guard for company. Said security guard ends up cracking an ax into a door to break into a room where Lana is trapped, but it’s more in the presentation than the actions in “Smallville.” The scene is captured in similar fashion to Kubrick’s techniques, and, for that, we give this show extra credit. (Note: The above clip picks up shortly after the most notable events, so you’ll have to trust what’s preceding is still pretty super.)

Episode: “A Nightmare on Facetime”
Grade: A
Synopsis: Randy Marsh is a character who can literally get away with anything, so using him as the mirror on which to reflect Jack Torrance’s specific mannerisms, distinctive speech patterns and wild transformation is ideal. After he buys a Blockbuster video store, Randy slowly loses his mind; driven mad by his failed dream of getting rich quick by purchasing a franchise soon to go bankrupt. In his time of crisis, he’s visited by the spirit of the dying shop who informs him that his family’s negative attitudes — aka, streaming movies or renting them from Redbox — are keeping his store from succeeding.  Still, despite the many joys of this premise, it’s Randy’s lurching movements through the aisles of Blockbuster — a unique target of satire for a “Shining” parody — matched by his ridiculous “rawr rawr” growling out in the cold that steal the show, making this homage one of the best.

Episode: “Beginnings”/”Leaves” (Season 1, Episode 1/Season 2, Episode 7)
Grade: B+
Synopsis: At the beginning of the under-appreciated British comedy, relative strangers Daisy (Jessica Stevenson) and Tim (Simon Pegg) team up to find a new living situation, and the new flat they’ve discovered might just be perfect. Their awkward tour comes with a reminder, though, that the only thing creepier than identical twins is identical twin girls who speak in unison; a quick but hilarious homage to the Grady twins who just want “The Shining’s” Danny to “come and play” with them. But apartment-hunting sucks, so Daisy and Tim decide to move in anyway. Just showcasing creepy twins isn’t the most original or inspired homage, but the moment is funny and “Spaced” paid tribute to this scene in its series finale, reprising the entire apartment tour with a new perspective. For the callback alone, we’ll knock it up a notch.

Episode: “Playthings” (Season 2, Episode 11)
Grade: B
Synopsis: The WB/CW’s favorite demon-hunting brothers have paid tribute to tons of pop culture tropes over “Supernatural’s” 11 seasons, but Season 2 was where things started getting a bit more obvious. This episode’s dedication to celebrating “The Shining” is impressive, thanks to a creepy hotel, Sam and Dean staying in Room 237, two (not exactly identical) sisters running around and a mysterious old lady hiding out in the upper floors. And that’s before we even get to the bar scene, where Dean gets served a drink by an eerie bartender in an eerily familiar bar. But while “Playthings” is stacked with Kubrick references, they’re almost distracting from the main mystery, trying to have the best of both worlds.

[For more “Shining” references, make sure to scroll through IMDB’s massive collection of connections for both TV and film.]