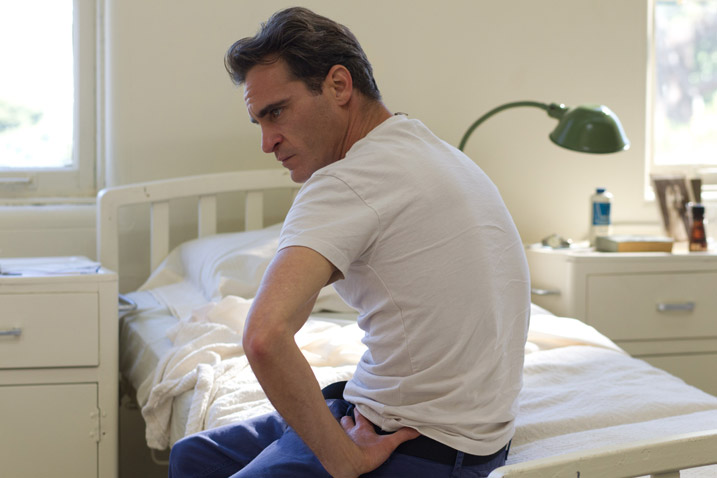 READ MORE: Why Joaquin Phoenix is the Most Fascinating Actor Working in Film Today


One of the earliest films in his career to garner serious awards contention — he won the Best Supporting Actor award from the National Board of Review and the Broadcast Film Critics Association — Phoenix is a charismatic and abrasive force in James Gray’s New York City commuter crime drama. The actor’s intimidating screen presence in almost every role is undeniable and routinely strong, but he finds a restraint in the character of Willie Gutierrez that is equal parts worrisome and charming. As Mark Wahlberg’s ex-convict Leo gets sucked back into a life of crime under Willie’s guidance, Pheonix relishes the chance to play a criminal that’s hard to deny and even harder to cross. Phoenix’s subdued menace here was just the beginning of his fruitful collaboration with Gray.


In Ridley Scott’s epic historical drama, Phoenix plays Commodus, a power hungry, patricidal emperor and nemesis to his brother Maximus (Russell Crowe). Commodus is a particular brand of supervillain; he is slimy, conniving and heartless. The performance is quiet and subtle, and Phoenix conveys a desperate need for power that is both chilling and pathetic. He creates a worthy enemy and the perfect foil to Crowe’s bold and honorable Maximus.


Joaquin Phoenix “burns burns burn” as Johnny Cash in “Walk the Line.” For Cash, the “Ring of Fire” is his immense drug and alcohol addiction, which he abuses throughout the film to numb the rejection he feels toward the love of his life, June (Reese Witherspoon). This biopic documents Cash from his humble beginnings to his status as a country rock n’ roll icon. The tragedy of this protagonist is in his addiction to substances; the more he rises in fame, the more he numbs the pain with synthetics. The vicious cycle is charted expertly by Phoenix, who brings the tragic Cash to life with an unpredictable energy. With his slow, drawn out cadence and intense gaze, Phoenix earns a spot in the biopic history books with his Oscar-nominated turn here.


Phoenix often triumphs when tackling characters battling internal conflicts, and Leonard Kraditor in James Gray’s criminally overlooked romance drama is no exception. We first meet Leonard in the midst of a failed suicide attempt and soon learn that it has been one of many. Gray scatters Leonard’s backstory throughout the picture, including the unfortunate demise of his seven-year engagement, but the depression and remorse he feels is sensitively explored by Phoenix from the very first frame. Rather than imbuing Leonard with self-pity, the actor shows quiet flares of hope, filling the two eponymous relationships at the film’s center with profound heartbreak and optimism.


One of Phoenix’s great performances is the one nobody knew was a performance. In 2009, he grew out his hair and beard and announced to the world that he was retiring from acting to start a hip hop career. That journey was captured in a “documentary” by Casey Affleck that appears to show Phoenix in a career spiral and an outright nervous breakdown. After the release of the film, he returned to normalcy and revealed the events of the “doc” were staged by himself and the director. The most amazing thing about this performance is that he stayed in character not only through the shooting process but for all his public appearances, including performing in hip-hop shows and one infamously disastrous episode of “Letterman.” The result is a highly underrated statement about celebrity culture and an intensely believable performance of a man spiraling into insanity.


After Phoenix’s self-imposed break from acting and his increasingly erratic public appearances, it became unclear whether or not he would ever return to acting in a meaningful way. But all fears were assuaged in 2012 with the release of Paul Thomas Anderson’s “The Master.” Starring Phoenix as Freddie Quell, a naval WWII veteran suffering from PTSD, the drama follows his relationship with Lancaster Dodd, an enigmatic cult leader played by the brilliant Philip Seymour Hoffman. Dodd runs The Cause, a self-improvement-based philosophical movement (based by Anderson on the principles of Scientology) with his wife Peggy (Amy Adams). Together, they put Freddie through “processing,” which requires him to undergo intense psychological examination, resulting in some of the most powerful, carnal and soul-rattling scenes of Phoenix’s entire career.


Phoenix has fallen in tortured love on screen plenty of times before — look no further than the wrenching “Two Lovers,” the booze-soaked “Walk the Line” or even his recent turn in the obsession-tinged “Inherent Vice” — but he’s rarely been able to tap into the kind of sweetness and pure longing that punctuates Spike Jonze’s aching love story “Her.” Despite all of the hurdles that Phoenix’s Theodore is ready and willing to face to “be” with his lady love Samantha (voiced by Scarlett Johansson) and the unavoidable knowledge that their romance can never, ever be fully consummated, Phoenix’s turn is a fully immersive deep dive into the pains and pleasures of love. He’s never been this vulnerable, and he’s also never been this damn lovable.

READ MORE: Review: Why Spike Jonze’s Weird And Wonderful Technological Romance ‘Her’ Is One of the Best Studio Movies of the Year


The actor’s fourth and most recent collaboration with James Gray, “The Immigrant” was unfortunately buried by The Weinstein Company during its release in May 2014 despite being one of that year’s most masterful period dramas. The film centers on Marion Cotillard’s Ewa, who arrives in America without her sister and falls under the employment and desirable eye of Bruno Weiss, the owner of a theater that doubles as a prostitution ring. Bruno is in many ways the archetypal Phoenix character — equal parts creepy and entrancing — but the arc Gray gives him slowly subverts our early impressions in unexpected ways, and Phoenix quietly reveals an emotional core that is as believable as it is damaged.


Given his erratic behavior during the filming and publicity for “I’m Still Here,” the idea of Phoenix playing a hazed-out, drug-fueled, Thomas Pynchon-created hippie detective didn’t seem to be a stretch, but few could have predicted how freewheeling and downright lovable he turned out to be in the role. With shaggy hair, aviator shades and a nonchalant attitude that makes most of his speaking lines indecipherable, Phoenix proves adept at mixing slapstick, verbal and paranoid comedy into a loopy, never-ending cycle. But just when his Doc Sportello seems too cartoonish to be true, the actor reveals his bruised heart and lovelorn obsessions, making the kookiest character of his career also his most strangely relatable.

This Article is related to: Features and tagged Gladiator, Her, I'm Still Here, Inherent Vice, Joaquin Phoenix, The Immigrant, The Master