The new comedy series “Con Man” has allegedly broken records for Vimeo VOD, but creator Alan Tudyk doesn’t know what they are. However, he’s very happy with the response he’s gotten to the crowd-sourcing record-breaker set in the world of sci-fi conventions, which he produced with Nathan Fillion.

READ MORE: How a Web Series Went From Indiegogo to the Biggest Panel at Comic-Con

Tudyk and Fillion were launched into the convention circuit after starring in the Joss Whedon cult favorite “Firefly” in 2002, and have accumulated a crazy assortment of stories in the years since. Those stories are the foundation of “Con Man,” which features Tudyk as the (fictional) star of a (fictional) tragically-canceled sci-fi show. who has an ambivalent relationship with the genre that’s made him vaguely famous. But there’s a huge cast of fan favorites involved to tell him that he’s an idiot.

Indiewire got Tudyk and Fillion on the phone while they were sitting in the parking lot of Universal Studios. “He wants to ride rides,” Fillion quipped. “I just want to eat the cotton candy.” We didn’t get details on what rides they rode, but the pair did disclose the thinking behind the release strategy (blocks of episodes at a time, once a week), the “show within a show” we can anticipate down the line and whether or not flying a spaceship is like riding a bike.

So, did you break the records you wanted to break?

ALAN TUDYK: We did! We were scratching the record for a while, but then we broke it. And it broke into pieces.

Yeah, what did you hit?

TUDYK: I don’t know. They basically say, “There’s a record, we won’t tell you what it is, but we’ll let you know if you break it.” And then they told us we broke it. So it could have been the record of the No. 1 show named “Con Man.” [laughs] But they were excited about the record, so we’ll take it. I’ve never known an executive to lie. [laughs] No, [Vimeo is] great. They’re not typical executives.

How has the fan reaction been?

TUDYK: Really positive. Which is great because they’re the ones we wanted to make sure liked it. Because it does ride the line. Because there’s a line where my character says, “I hate sci-fi.” And we did a viewing with some fans and in that moment, there was an audible gasp because they were “Firefly” fans. It was surprising to them, but by the end they were cheering because Wray gets it. He gets attacked. Which is how it should play out if you don’t respect sci-fi. [laughs]

That was actually something I was really impressed by, watching the first few episodes. It’s one thing to do a love letter to fandom, but at the same time, I really admire the fact that you were willing to be honest about having, potentially, an ambivalent relationship to the thing.

TUDYK: Yeah, and they’re complaints I’ve heard some actors make. At conventions, there’ll be someone who doesn’t get it.

FILLION: There are a few actors at conventions who I’ve met, and my response is always, “Where would you rather be?” 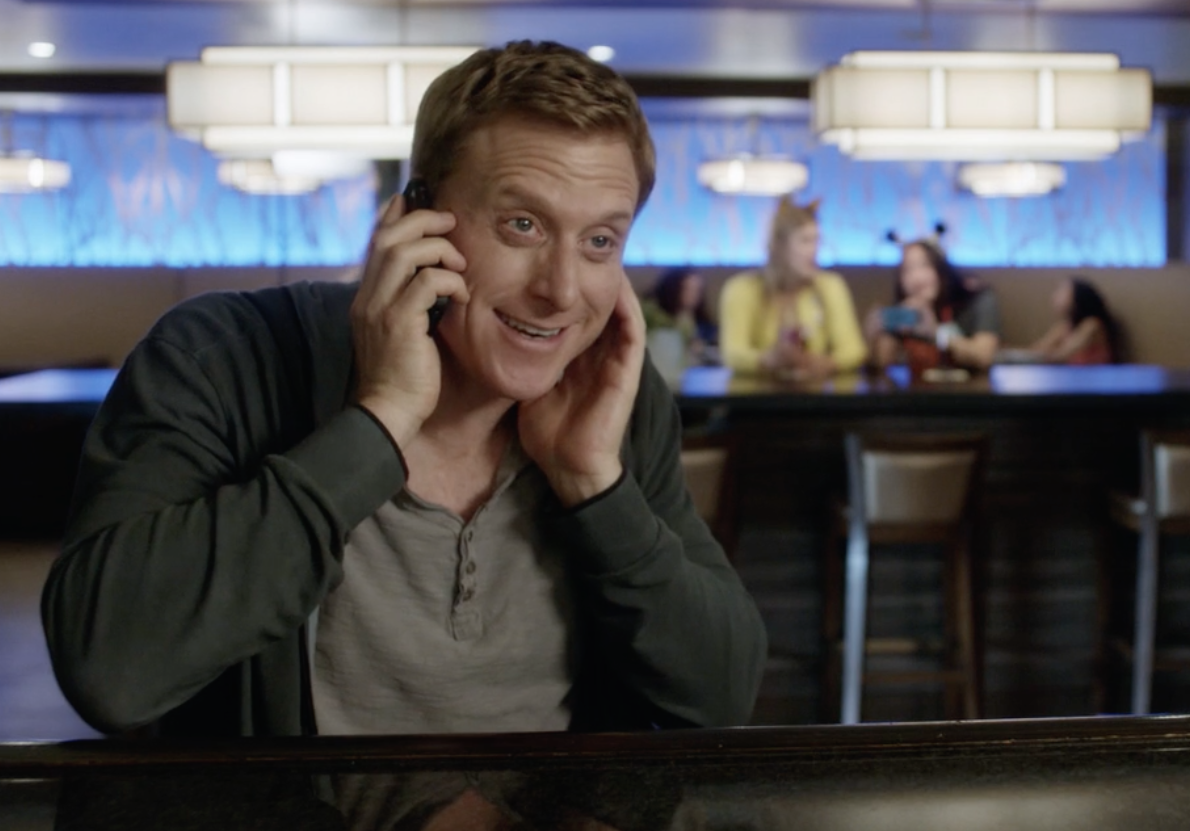 What do they say?

FILLION: Well, they don’t have an answer. They’re looking for allies in their moping and depression and attacks and they’re not going to find one here. People line up to adore you. People are fanatical about something that you were in. Where else can you go and be a rock star for a week? It’s like a fantasy. It’s amazing. It’s incredible. Are you feeling a little down? Are you feeling bad about yourself? Go to a convention! You’ll feel great, guaranteed.

TUDYK: But the tricky thing for Wray is, he goes to these conventions, he feels like a rock star, and he then goes home to a one-bedroom apartment and he can’t get any jobs. So it’s that mindbender that keeps him unhappy and uncomfortable. It is an interesting thing about that world. You can be a rock star there, and then as an actor if you still want to pursue that, your career in that sense, new work is a struggle. So it can mess with you and it definitely messes with Wray. Especially when his best friend is Jack Moore [Nathan Fillion’s character] who has his own clothing line. And they started out relatively in the same place.

Playing that opposite each other, was that a fun element of the show?

FILLION: Alan and I, we met working together, but we remained friends for a long time. It was really nice to get together and work together. It’s really amazing to see Alan, my buddy the actor, in the role of creator/writer/director. And then at one point we actually get to get on a spaceship again, and I can be a captain and he gets to be the pilot. It scratched a very old itch. Is that okay to say that?

TUDYK: Well, it was an old sore… I think it’s probably more inappropriate to say that. That’s grosser. Like something that is very festering.

FILLION: Yeah, it was just something hard to get to.

I want to talk a little bit about the strategy that you’re using in releasing the show; a new block of episodes every week for the next month. Is that something that you guys came up with or is that from Vimeo?

TUDYK: We all kind of came up with it together. We didn’t want to release 10 minutes a week or anything like that. We didn’t want to stress out too long. We wanted to put it out in healthy doses. The first one is four, next week is three-minute episodes, and each release tells one story, so you can just go back to back with each one and get to the end. So you aren’t left wondering what happened. You can finish up that story and then wait until the next week.

FILLION: We basically release it in a way we personally would like it to be released, if we were watching.

TUDYK: And also, it gives us an opportunity to finish all the digital effects from the last few episodes. Because it’s on a spaceship and in the world of “Spectrum.” I have a lost episode in there, too. [Episodes] 11, 12, and 13 deal with a lost episode of “Spectrum” that gets released. So the whole cast gets together, we get to see what the whole cast has been doing the past 10 years. But there’s a lot of special effects.

TUDYK: It’s kind of a spoiler, I guess. I didn’t say what happens in the “Spectrum” episode. I don’t want to spoil that.

TUDYK: It was absolutely something we wanted to do.

FILLION: It was something we wanted to do, but we didn’t know that we would be able to get the funding to go that far. We set our sights a little low in regards to the pledge goal. We didn’t want to say, “Hey, we’re only doing this if we can do it in its entirety.” We wanted to get the idea out there, to give people a taste. We didn’t have lofty dreams. Well, our dreams were lofty, but we just wanted to get it out there. Alan had fantastic ideas and we wanted to see them come to fruition.

TUDYK: Thank you, Nathan. And the idea of showing the spaceship and getting into a space show was something we wanted from the beginning. Because, we get to play in space again! That was something we really wanted to do and we didn’t know how else we were going to get to do that. Fans have often asked for a reboot of “Firefly,” but my character [SPOILER ALERT FOR “SERENITY”] — is dead. So I wouldn’t be flying any spaceships. This is one way that I can get a new spaceship and fly it with Nathan as the captain.

And this time you got to design the spaceship.

TUDYK: Exactly. It’s amazing how much goes into it. I told Joss Whedon, “Putting on a space show is hard.” He just laughed in my face.

Where there things from “Firefly” that you took as lessons, in terms of building the spaceship?

TUDYK: Well, our spaceship was amazing. I think it took a little over 2 million dollars to build the initial “Firefly” spaceship. That was the biggest expense on “Firefly” and “Serenity.” We didn’t have that much money to spend. So ours cost $200,000, it’s a little different in that way. But I definitely knew how to fly. That’s something you don’t forget. One spaceship is pretty much like another when it comes to flying.

TUDYK: It is. Actually there are pedals, which you don’t really see. It’s a chain that keeps most of the things going.

TUDYK: On “Firefly” there’s a lot of pedals. On our new spaceship, hamsters. There’s a lot of rodent work. If we do more episodes, I really want to focus on the work that they’re putting in.

Talking about Season 2, is there a plan in your head for it?

TUDYK: Certainly. There are a lot of episodes I want to do. Some of them I’ve already broken ground on. Broken paper on.

FILLION: We’re trying to keep focused on making sure he’s making the project at hand before he continues on to the next one, but he can’t be stopped. He’s a rolling stone.

TUDYK: I get a lot of ideas when I’m jogging. It’s just like, “Oh that would be funny to see.” I mean, that world is so huge. There are so many stories to tell. We’ve been going to conventions for 13 years. There’s plenty to pull from.

Would a second season also be crowdfunded?

TUDYK: I don’t know. We haven’t determined that.

FILLION: That’s a bridge we haven’t burned yet. In our dreams, this thing would be self-sustaining. Maybe someone will step in and allows us to honor the rules in the way we want to, let us gain control of ownership, but still want to have a part and help us out. We’ll see.

The first four episodes of “Con Man” are available for rental on Vimeo VOD now. The second block of episodes will be released this week.