Breaking Down Gender Diversity on TV: Just How Many Women Are On Broadcast Dramas, Anyway? 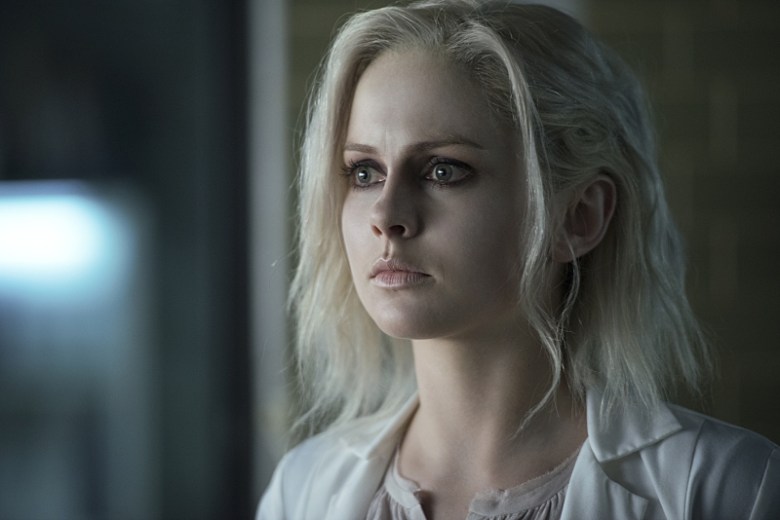 A curious thing has happened this season on “Sleepy Hollow”: When you watch the opening sequence (above), what do you see? The answer is some weird gothic imagery and some very attractive people. Specifically, though, you see one man and four women.

It came as a bit of a surprise, seeing that, when you consider that from a very early age, we’re trained to accept a female minority on the shows we watch — the Smurfette Principle, as once defined by writer Katha Pollitt. And it raised the question of how “Sleepy Hollow” compares with other shows of its ilk… so we made a spreadsheet.

Because — as has been mentioned occasionally — there’s too much TV, we put some strict parameters on this survey. The numbers we ran cover every broadcast drama on the fall 2015 network television schedule (including The CW), using our best judgements as to determining who constituted a series regular when an official network listing wasn’t found. In the interest of transparency, you can see the spreadsheet here, which includes a few notes about specific shows when warranted.

It’s important to note that just because a show only features one female character, that doesn’t make it bad or anti-feminist. “Scream Queens” might feature eight female characters and four males, but all eight women combined don’t have nearly the depth of character found in “iZombie’s” protagonist Liv (Rose McIver).

We did our best to double-check these statistics, but even if we’re off on one or two of them, the broader picture painted is still interesting. What can we learn from this exercise?

Most important fact: Of the 46 shows profiled here, only nine feature a majority female cast, with another nine coming in at a 50 percent even split. Anyone afraid that men are losing their majority share of on-screen representation should breathe easy. 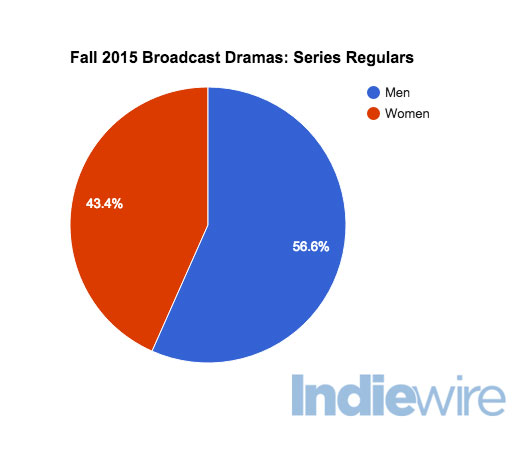 There are no transgender series regulars in broadcast dramas: I mean, this isn’t technically that big of a shock. Laverne Cox may be the first to break this glass ceiling if CBS’s attempt to reshoot the pilot for legal drama “Doubt” proves successful.

ABC loves the ladies: With its emphasis on ensemble dramas, female-friendly content and shows created by Shonda Rhimes, the lowest percentage for an ABC drama was 40 percent, for “Marvel’s Agents of SHIELD” (six men, four women). Though, that being said…

Shondaland doesn’t do as well as you might think: “Grey’s Anatomy” might be one of the best shows for female representation on this list with 15 cast members, nine of whom are female. But the other two shows overseen by Shonda Rhimes, “Scandal” and “How to Get Away With Murder,” come in at 45 percent female and 44 percent female respectively. (Note: “Murder” was created by Peter Nowalk, with Rhimes serving as an executive producer.) It’s true that both shows do feature two of the most iconic female leads on television right now and some of the boldest feminist writing for those characters. There’s just an awful lot of dudes on those shows, too.

“Rosewood” acquits itself well: This is largely thanks to the fact that, while the show stars Morris Chestnut as a “private pathologist,” the actors playing his mother, sister and sister-in-law are series regulars as well. That’s one side effect of adding lesbians to your show: They need love interests too.

“Castle” does well, too: And for a reason similar to “Rosewood.” The cast is a pretty typical procedural set-up, but by including the mother and daughter of the protagonist, its numbers are higher than other shows of its genre. 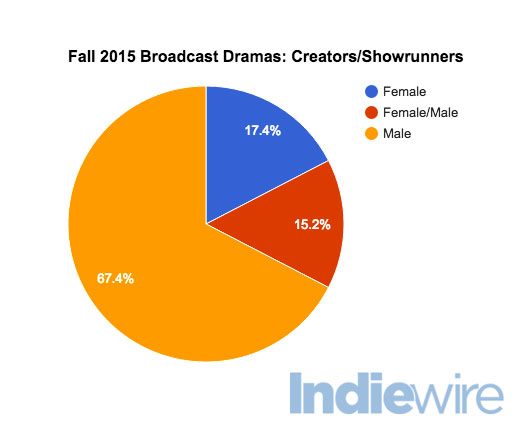 A female showrunner makes a difference: Fifteen of the 46 profiled shows were created by a woman or a male-female team, and, of those, the lowest lady percentage was “The Vampire Diaries” with 29 percent (and that show just suffered a shake-up following star Nina Dobrev’s departure at the end of last season). For female-created series, the lowest percentage of female cast members was 45 percent (“Scandal” and “Madam Secretary”).

“Supergirl” is an even 50/50 split: Based on the pilot, Melissa Benoit’s take on Kal-El’s cousin deserves every bit of the praise that’s been heaped upon it. But if any show should go majority-female, it’s this one.

NBC, in general, isn’t doing great: Only one of the eight NBC dramas profiled featured a majority-female cast (“Blindspot,” with three men and four women), with “Heroes Reborn” coming in with a 50 percent split. The other six shows are majority-male, with two of them — “Blacklist” and “The Player” — only including one female series regular.

Are things different for sitcoms? In the cable world? We’ll let you know when we finish those spreadsheets. In the meantime, understand that the reason for running the numbers is simply this: When a show features a plurality of women, you’re likely to see more women’s stories being told on screen — and a range of stories, at that.