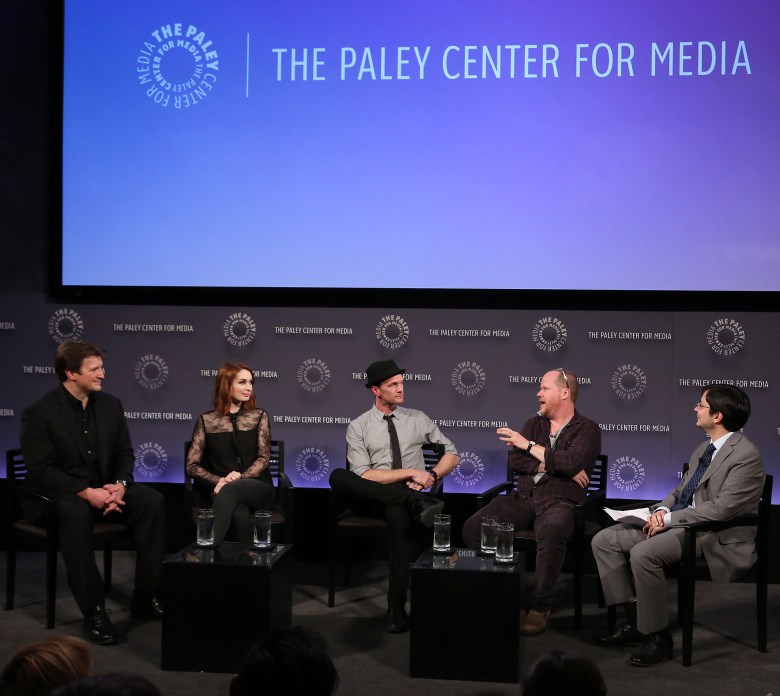 In a discussion panel moderated by Dave Itzkoff of The New York Times, creator Joss Whedon and cast members Neil Patrick Harris, Nathan Fillion and Felicia Day laughed together and fondly remembered the creation of “Dr. Horrible’s Sing-Along Blog.” Hosted by the Paley Center for Media, this reunion marked the kick-off of the third annual Paleyfest New York. From the four panelists goofing around, to how “Dr. Horrible” was groundbreaking for its time, here are some of the highlights from the panel.

The scenes they wished they had filmed.

“I think there were maybe three lines that we cut,” Whedon said to Indiewire prior to the panel. “We didn’t really have a lot of margin of error — we had intended to cut up Neil’s first speech because I knew it was too long when I wrote it, then we filmed it with that looming in the air the whole time, going ‘there’s no way we’re changing it.’ It was a weird way to start, but it turned out to be the perfect way because it lulled people into the first song where they would go ‘oh, okay, I guess I’m here now.’ So that was unexpected but basically there weren’t many things to rewrite.”

“Oddly, things that were supposed to be fully formed due to circumstance had to end up being long one-shots, but I think the fact that they were long one-shots without an edit added something to the piece,” Harris said. “I feel like a lot of those things happen for a reason. And he’s very good at managing time, so when you’re running out of time at the end of the day, no one is better than Joss at saying ‘alright, here’s the new plan.’ Instead of saying ‘we’re going to cut four scenes and we’ll figure it out later’ he just says ‘okay, get ready because we’re going to do all of this in one take, I hope you know your shit.’ And it forces you to act better.”

They wouldn’t change anything (except for that Godzilla thing).

“Honestly, there’s very little I would have changed. I really outlined exactly what we were going to put on screen. And I actually have watched it recently with my kids. I have less regrets about my…I’m very big on regrets ‘oh, why did I do that?’ I watch it again and then I think it’s not worth it to regret,” said Whedon.

“He had me film that thing where I turn into a gigantic Dr. Horrible-like Godzilla and come smashing down on the things. And the way he filmed that was he sped it up, he sped the audio up. And then I had to learn the track faster so I sang it like a chipmunk, and I had to stomp at regular time, but then he slowed it down to regular time so then my lips matched but also I was stomping hard. But I was in the middle of a parking lot doing a scene where there was just a white backdrop, and I was supposed to stomp around like Godzilla and sing like a chipmunk and carry some sort of gravitas. And I cringe a little bit when I watch that because if I’d known what it was going to look like I probably would have acted better, but it’s hard to stomp like you’re much heavier than you are without feeling stupid. My ego got the best of me,” said Harris.

“Somebody asked me about ‘Is there something you regret cutting?'” Whedon said. [Note: That was Indiewire, during the red carpet.] “Everything we wrote is what we shot, is what they saw. From the very first inception, before I ever talked to anybody about it, before Jed, Maurissa, and Zack all filed in. Zack, I remember, he was like ‘I feel like it should have a sort of sadness to it, a bit of a darkness to it.’ I’m like ‘we should kill Penny!’ [laughter] Zack was like ‘I meant a building, like the apartment, not…oh god, what have I done?’ [laughter]”

“I loved that, I remember at the very end…Because I was right at the computer watching reactions and people’s comments,” said Harris. “iTunes comments were the only way we could see how things were going because that was where it was released and it was just singular. And people, when she died, and then it ended on that super sad note, people were just gobsmacked.”

“I first heard about ‘Dr. Horrible’ when we were on the strike line, the writer’s strike,” said Day. “And there was mutiny every day, and all the fans… there was even a picture of the moment when you told me about ‘Dr. Horrible.’ I remember I came up to you and I was like ‘uh, did you see my show? ‘The Guild?’ You don’t have to say anything about it, if you see it, it’s fine…’ And then you were like ‘yeah, I saw it, I really liked it.’ And I was like ‘poop.’ And then you were like ‘yeah, I’m thinking about doing something on the Internet myself, a supervillain musical.’ And my head exploded so hard and so fast, I was like ‘I have to go.’ And then I left. But then I got an email ‘Can you sing? J.’ And I pooped again — it’s a running theme that you bring out in me, so thank you. [laughter] It was wonderful. I was so excited because it was on the web and I was so obsessed with web content at that point. I was like ‘why is the beautiful orca coming into the pond that’s too small for him?’ [laughter] That’s a terrible analogy.”

“It’s interesting that you say that because while we were doing [‘Horrible’], ‘The Guild’ was a big deal,” said Harris to Day. “And you had a pulse on the internet and its future, you really did. When we were in Austin and we were walking down the street to have dinner before the screening and you said ‘oh, there’s this thing that some of my friends are doing, it’s called Twitter, you should do it.’ [laughter] And I said ‘why would I do something so strange?’ And you said ‘no, it’s like texting and you tell people what you’re doing and where you are all the time.’ And I said ‘that sounds terrible, why would I want people to know where I am all the time?’ I didn’t understand it at all. But that was very very early on.”

Everyone can relate to supervillains.

“I think there’s something in this story and the supervillain in this one is very relatable and I think that’s what makes it have some kind of resonance to it,” said Harris. “Because normally in a supervillain and a superhero movie you have to get to see the villain, see what they do, see what their destruction is, see the antagonism of it all. And then maybe see a C-story that goes back in time and shows how they came to be. But this is…Billy was you watching it, and you could see this yearning to want the girl and to want to be noticed. And the idea of ‘I would do anything to get her to notice me’ and to opt towards the dark side, the villainous side for that goal is I think something that people can respond to. So you get that emotional undercurrent from the get, right? So the supervillain thing is less, it seemed less a choice and more the path.”

“I think the supervillain, they get to say the things we’re all thinking, ‘the system is broken, it’s not fair, something is wrong.’ Then they’re very bad at fixing it. [laughter]” joked Whedon. “But they’re the trouble maker, they’re the fly in the oven, they’re the mischief, they’re the kid. The hero is the authority figure, whether he’s the star of the movie or not. You have fun with that. Are you watching the Joker or are you watching Batman? [laughter] And I also think that the thing about Penny’s death, it was inevitable even though it was not the first thing we thought of because the tragedy in the very truest sense is the problem the villain has which is a very classic nerd-moment thing where as soon as he’s talking to her, he has to correct her, he has to ignore her, he does everything wrong as soon as he achieves that goal in the first act. And the reason we had ‘A Man’s Gotta Do’ as a song that they both sing was because they’re two ends of the same spectrum. They both have this macho determination about solving something that blinds them to what’s really going on. And now when I watch it I get super sad when she’s there, and it’s the moment and he blows it and I’m like ‘this is why she’s going to die, this is the moment it’s all happening right now.’ [laughter].”

The internet legacy of “Dr. Horrible.”

“I was going to a reunion for my film professor, who’s the great Yoda of my life,” said Whedon. “And there was a student, he was a very rich guy and he was flying a lot of us over. He was a financial guy and it was the day we were about to start and they were talking about the internet and finances and stuff, and [my friend] and I had been talking and she goes ‘oh, you know Joss has just done this internet musical and it’s going to premiere tomorrow’ and he was like ‘yeah, I’ll give you $2 for that.’ Very sweet, but just completely dismissive. And I just saw her and him at another reunion in LA for my professor and I got to tell her, because she remembered that, she remembered that he had completely written it off. And I got to tell her my favorite statistic, which is that despite the fact that we went into it with the spirit of ‘if it all goes down the river that’s fine.’ I made more money off ‘Dr. Horrible’ than I made off the first ‘Avengers’ movie.”

“I would like to say as somebody from the web, I don’t think there’s been anything as successful as ‘Dr. Horrible’ since on the web” said Day. “Maybe you could say ‘House of Cards’ turned the world to the internet, but honestly there hasn’t been anything that has been as impactful to fans as to the culture and just is a phenomenon as far as web content, especially scripted web content, even now. So challenged dropped, somebody should do something about it. [laughter].”

PaleyFest New York continues at the Paley Center for Media from October 10 until October 19.

READ MORE: Neil Patrick Harris to Host the Oscars in 2015