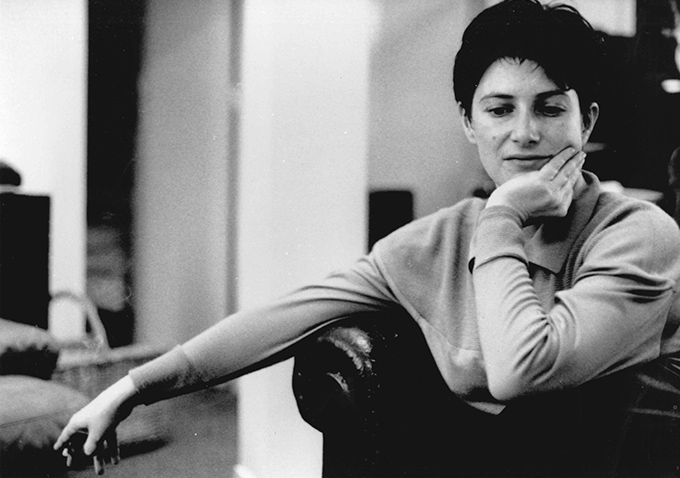 I was just explaining to a friend how much I liked her latest film, “No Home Movie,” which I saw last week at the New York Film Festival. Much of it is a documentary consisting of shots of her aged infirm mother wandering around her very tidy Brussels apartment, as well as shots of these rooms and balcony emptied of people. There are also dialogues between Chantal and her mother, between the mother and her caregiver and between the mother and Chantal’s sister. Chantal descends on her mother from time to time, then goes off on her globe-trotting, film-making ventures, Skyping her mother to keep in touch. 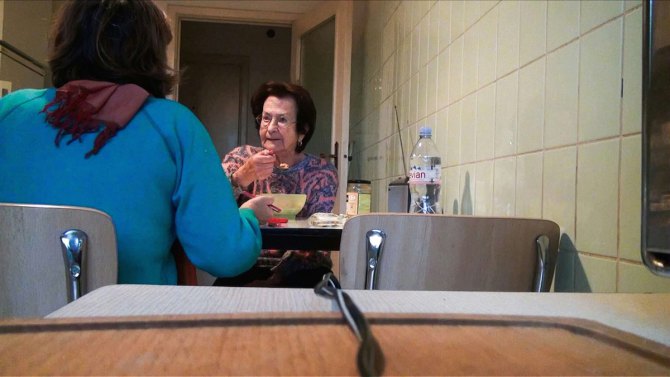 Signing off from these Skypes, there are multiple declarations of love and kissy-kissy, but when they are together in the same room the tension between mother and daughter is palpable. A sort of comedy unfolds, with Chantal trying to get her mother to tell her stories about her youth, including her years in a concentration camp, meanwhile slipping the noose of her mother’s curiosity about her famous daughter’s life.  At one point the mother complains to her younger daughter, “Chantal never tells me anything.” The sister replies wryly: “She never stops talking!” The retort: “But she never tells me anything important.”

We get the sense that Chantal is forever fleeing this comfortable, static, bourgeois mother’s nest, while at the same time desperately dependent on her mother for the maternal warmth she can find nowhere else.

The film is slow, annoying—and real. It has more truth in it than 98% of cinema, art or commercial movies. Never mind the baffling cutaways to deserts and unidentified landscapes: are they metaphors? disorienting moves that the experimental filmmaker felt compelled to make? You watch these relatives who love each other but are frustrated in their attempts to connect and think, “It is what it is.”  A slowed-down, plot-less, Belgian version of “Long Day’s Journey Into Night.”

The obituary in yesterday’s New York Times noted that Akerman was depressed this past year over her mother’s death, the implication being that suicide may have been the cause of death. So far, that hasn’t been confirmed. Regardless, it’s all there on the screen.

I thought back to a 1978 feature film of hers, “Les Rendezvous d’Anna.”  A woman filmmaker is on tour with her latest work: she takes trains around Europe, stays in hotels, picks up men when she’s lonely, and returns to Paris, where she listens to her answer machine. It’s a bleak picture of a sad, restless life, not especially satisfying as narrative, but touching: you sense Chantal is trying to make a personal statement about what it feels like to be in her skin.

You couldn’t get closer to her skin than in “Je Tu Il Elle,” where she rolls around the floor naked eating sugar, then hitchhikes with a trucker who has sex with her. I haven’t seen it in a while, but I remember being impressed with the raw honesty of it.    I’m very partial to those early shorts she made in New York, such as “News from Home” (another mother-daughter dialogue, this time postal) and “Hotel Monterey.” 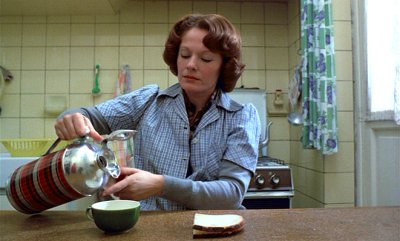 Of course “Jeanne Dielman, 23, quai de commerce, 1080 Bruxelles” was her breakthrough film, her masterpiece, as good as everyone says—a cinematic game-changer, but I am still more drawn to her earlier personal work. There was a time when I looked forward to her next movie more than any other filmmaker’s. In “The Golden Eighties,” a kooky musical, she tried to spread her wings, with fairly amusing results. Rohmer-esque efforts like “A Couch in New York” were less successful, to my mind. “Histoires d’Amerique” was a clumsy if warm-hearted folkloric exploration of Jews in the Diaspora, with the sort of vignettes she was trying to get her mother to tell.

She reached another pinnacle with the magnificent “From the East,” another documentary of unblinking looking. In her underrated adaptation of Proust, “La Captive,” she captured something of her favorite writer’s moody obsessiveness while shrinking his social tapestry.

And so it went: an uneven oeuvre, this one good, that one disappointing, but always making an effort to try something new, to reinvent herself.

Some words that spring to mind about Akerman’s work are: annoying, irritating, stubborn—but in the best possible sense.  She was not obliging, thank God. She was not afraid to try your patience. She would push past the stage when the alleged single “point” was made and get you to keep watching, a prisoner of reality as it unfolded.

She was exceptional at showing process. The paradox was that so much alienation or depression could coexist with such wonderment and glee at being able to stare at the world as it is. As it was. It no longer is for Chantal. We are the poorer, and will now have to look for her rigorous honesty and generosity elsewhere.

This Article is related to: Reviews and tagged Chantal Akerman, News, No Home Movie, Reviews