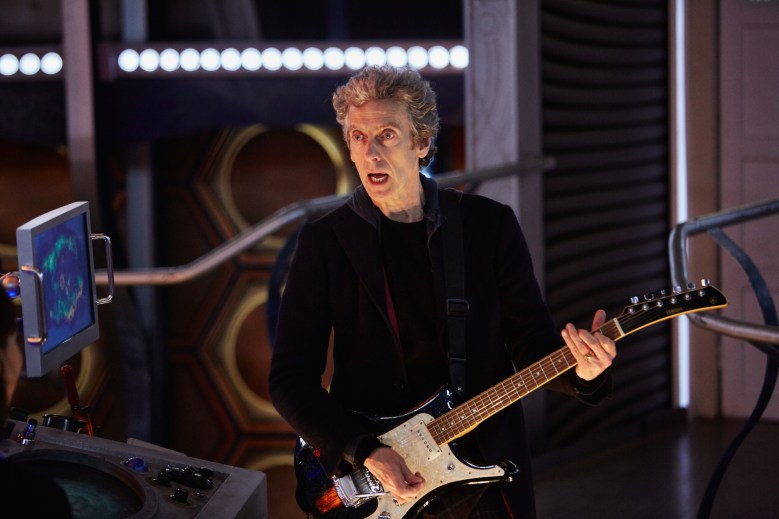 Oh, “Doctor Who.” Five stellar episodes in a row — it’s like last year’s damp squib of a season never happened. “The Girl Who Lived” is the show doing historical episodes as they’re meant to be done. It’s like “Fires of Pompeii,” “Robin of Sherwood” and classic Third Doctor adventure “The Time Warrior” all mixed into one — literally — electrifying episode.

READ MORE: Review: ‘Doctor Who’ Season 9 Episode 4, ‘Before the Flood,’ Gets Meta and Heavy Metal

It’s two Doctors for the price of one this episode, as we get a flashback and he finally realises why he regenerated as a slightly older version of Marcus Aurelius from The Fires of Pompeii — as a reminder that sometimes he can change fixed points in time. It’s an underwhelming reason, but it’s nice to get a quick glimpse of Catherine Tate’s much-missed Donna. The nature of the show is such that the Doctor has to be able to mess around with the timeline even when he knows he isn’t supposed to — having done it so many times before, it does lose its power a little, but it does successfully convey the immense weight of the power that rests on the Doctor’s shoulders. Yes, there are rules, but he’s really the only one who can enforce them — the rest of the Time Lords are missing and Missy’s attitude to rules is to see how many little pieces she can break them into. He has to be judge, jury and executioner — or not as the case may be — when all he’s ever wanted was to be the troublemaker.

Capaldi is having a whale of a time and isn’t even trying to hide it. He wisecracks, technobabbles and emotes like the best of them, thankfully securing his place in the pantheon of Really Good Doctors. Now that he’s finally come into his own, having been poorly served by last season’s patchy writing, he’s up there with Baker, Pertwee and Eccleston (yes, I said it).

Clara’s badass competence might be the best thing about this season — no longer torn between the man she loves and the man she’s falling in love with, she’s learnt the cost of travelling with the Doctor and she’s going all in. She may refer to him as her hobby, but it’s telling that we haven’t seen her life on Earth since the opening episode. Having been at this game long enough to recognise the warning signs, the Doctor is reminding her that she, at least, isn’t immortal — but Clara in turn has been travelling long enough that she knows some things are worth dying for. Alas, pride always comes before a fall, and the show seems to be hinting that Clara will fall far and hard when her time comes.  If rumours and foreshadowing are to be believed, she may be the first companion to exit the show in a coffin.

You Win or You Die

What do we say to the God of Death? “Not today.” Having honed her world-saving skills in Westeros, “Game of Thrones’s” Maisie Williams is an excellent choice for Ashildre — she has an eerie sense of self-possession that will come in handy next week as “The Woman Who Lived.” Although it’s highly unlikely that she will replace Clara at the Doctor’s side next season, as some viewers are hoping, she’s a bright star in a firmament of very good guest stars this season. Her psychic abilities could have been more fully developed, but there’s something very fitting about saving the day — and ruining False Odin’s reputation — through storytelling, and the last close-up of her face as the world burned around her was chilling.

Doctor: “I’m not actually the police, that’s just what it says on the box.”

Clara: “The universe is full of testosterone. Trust me, it’s unbearable.”

The Doctor speaking baby is usually played for laughs, but it seems that Viking babies are much gloomier than the regular kind. Which makes sense, given the life expectancy at the time — better get the teenage angst in early, just in case.

Questions (That Aren’t the Oldest Question)

Is that it for the sonic sunglasses? While many fans have hated them, they did give Capaldi that extra edge of self-parodying cool that fits in very well with his characterization this season.

Missy spoke ominously about “hybrids” in her last appearance, and now the Doctor realises that he’s created one in Ashildre. Will she be this season’s Big Bad, or just a reminder that the Doctor can sometimes get it catastrophically wrong?

This is the second time this season that Clara has implied she might not be entirely heterosexual, first snogging Jane Austen and now offering to fight the Doctor for Ashildre. Is this our first canonically queer companion?

This Article is related to: Television and tagged Doctor Who, TV Episode Reviews, TV Reviews