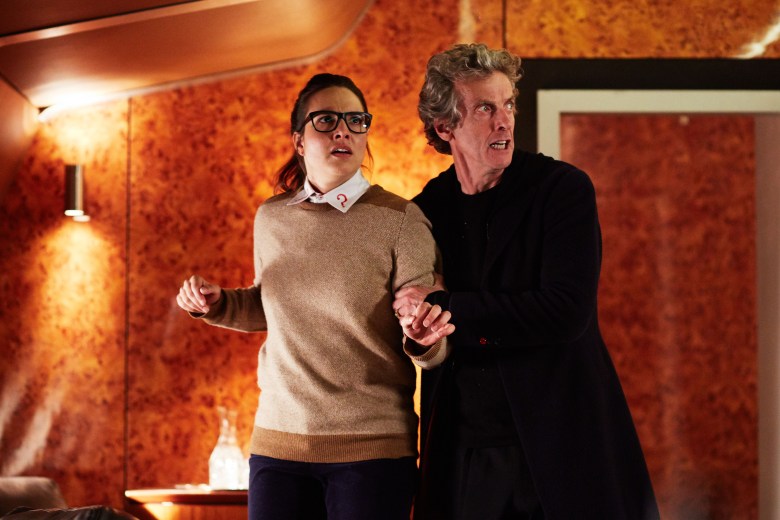 The return of fan-favorite aliens the Zygons would have been enough to get most viewers’ hopes up, but when you throw in UNIT, a seemingly-resurrected Osgood and another appearance of the Doctor’s electric guitar, you’ve got a classic in your hands. Luckily, “The Zygon Invasion” more than lives up to the hype, with some stellar political commentary, brilliant performances and some very creepy child actors.

PREVIOUSLY: Review: ‘Doctor Who’ Season 9 Episode 6, ‘The Woman Who Lived,’ Gets Legendary

In this show no one stays dead for long, so even if Osgood’s untimely demise at the hands of Missy was heartbreaking at the time, we had a sneaky feeling she’d be back. She’s the kind of character who is so blatantly fan service-y that it can be deeply annoying, but if Osgood is a little grating when playing against the Doctor, bantering with herself she’s an adorkable delight. When we last saw the Zygons in “The Day of the Doctor,” human!Osgood and zygon!Osgood had come to a mutual understanding — now it turns out that they kept her around, along with thousands of others who have been living secretly on Earth in relative harmony with humanity. Until now, of course.

Oh, Kate Stewart. She may be on the side of humanity — well, probably — but that doesn’t mean that she and the Doctor always see eye to eye. Like Prime Minister Harriet Jones in the Eccleston and Tennant eras, she wants to do what’s best for the planet, even if that isn’t always the moral choice, and she’s genuinely unsettling here; all the quipping and bravado from last season finale is gone. Of course, she could be a Zygon, but my money is on something much more terrifying — a military leader who isn’t afraid to compromise her morals if it keeps Earth safe and who, if she is to be believed, accidentally butt-dials the Doctor.

Kate’s road trip to New Mexico is a thing of joy – genuinely creepy and a much more successful “Doctor Who” take on a Western than “A Town Called Mercy,” the Eleventh Doctor’s “Cowboys and Aliens” rip-off. It also passes the Bechdel-Wallace test with flying colors, as Gretchen Egolf’s tough, traumatized Sheriff locks horns with Redgrave’s classy, kickass UNIT chief about the destruction of the town at the hands of the Zygons. Their scenes are unsettling because the audience knows that one of them has to be a Zygon in disguise, and the episode cleverly holds off revealing which one until the very end. It feels like an episode in its own right, or at least a spin-off buddy movie — think “Supernatural” with better hair products. She’s a small-town sheriff who happens to be a shape-shifting alien. She’s a classy British military commander. Together, they fight crime! (And occasionally make out.)

Of course, if the last phone call to Zygon!Clara is anything to go by, then Kate Stewart has been replaced herself — but who wants to bet that the sassy, be-scarfed UNIT chief is bluffing?

The Doctor Gets Political

The parallels between immigration debates aren’t exactly subtle here, but they’re so well-drawn it’s impossible to mind. This is a nuanced look at the problems of demonizing groups, of how to tackle radicalization and what happens when the enemy is the person looking back at you in the mirror.

Some Zygons have tired of their borrowed human forms and want to live openly — how often have minority groups been told “we’ll accept you, but you must assimilate”? Conversely, some humans find the hidden presence of the aliens threatening, in a tactful subplot about the politics of outing people. “The Zygon Invasion” explores the difference between splinter groups and the majority of a community, and shows how communities get radicalized when the powers that be attack everyone. Some people will hate this episode, especially for the Doctor’s explicit pro-immigration, anti-war arguments. But when someone who has traveled through time takes a stance, you have to believe he’s on the right side of history.

The Fourth Doctor called him an imbecile, fans overlooked him in favor of Sarah Jane Smith and he was last seen walking back to London from Scotland after meeting the Zygons in their first appearance. But thanks to a quick shout out it seems that one of the classic series companions — the naval commander who worked at military science facility Porton Down — developed nerve gas to reveal a Zygon’s true nature. This is because Harry Sullivan is secretly the best of all the companions, even if it is a bit ethically dodgy.

Clara Turns to the Dark Side

It says a lot about Clara’s characterization this season that her reveal as a Zygon was genuinely surprising. Trigger happy, ready to destroy a whole room of Zygon pods and giving orders to UNIT — this is exactly what we’ve come to expect from her after Danny Pink’s death at the hands of Missy. It also gives Jenna Coleman chance to vamp it up as an evil version of her plucky, bossy character — never have well-defined brows and red lipstick looked so menacing.

And of course Clara used to memorize Trivial Pursuit questions so she could win. Of course she did.

The Doctor: “I’m the President of the World. I’m here to rescue people and generally establish happiness all over the place.”

The Doctor: “Both Zygon and human at the same time.” The Doctor is fascinated by the two Osgoods, and the hybrid reference they embody (which is shaping up to be a major theme this season). Maybe all this is a fakeout and the Doctor’s secret is that the TARDIS is just a really advanced Prius.

The Doctor: “This is your country. Protect it from the scary monsters. Also the Zygons.”

Kate Stewart: “It was in the ’70s or ’80s?” This is a nice shoutout to a debate that separates the hardcore Whovians from the newcomers — the UNIT Dating Controversy. Various UNIT-centric episodes of the classic show were a bit free and loose with what year things were actually taking place — an understandable problem with a time travel show — and this isn’t the first time it’s popped up in the reboot. The UNIT Dating Controversy is also an excellent fanfic title for a story where Kate goes out with sexy Sheriff Zygon, much to the rest of UNIT’s consternation.

Questions That Aren’t the Oldest Question

Which Osgood is this? Does it really matter? And is she staying?

Is Kate really dead? Is she a Zygon? Is the Doctor a Zygon? Am I a Zygon?

How long has Zygon!Clara been around? Is this really the first time we’re seeing her?

[Note to Zygon high command: I think this was convincing. Nobody suspects anything. Proceed with Project: Media Infiltration as agreed.]