This Week In Home Video: 'Tomorrowland,' 'Dope,' and More 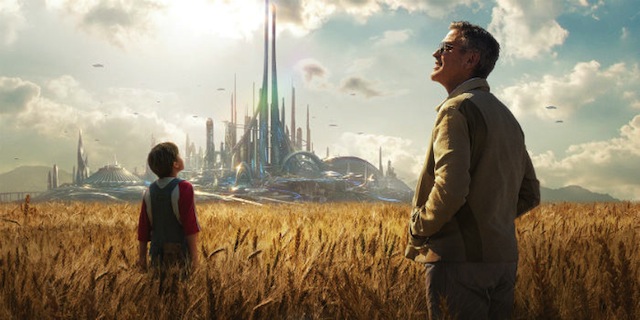 It’s another busy week on this week in home video with a great mix of new and classic releases. There’s Brad Bird’s science-fiction adventure based on a Disney theme land, an indie crime dramedy starring, among others, A$AP Rocky and the lobby boy from “The Grand Budapest Hotel,” a body horror from the mind of David Cronenberg, and the complete Blu-ray release of one of the best TV dramas in history.

Let’s start with Brad Bird’s “Tomorrowland,” about a grizzled, disillusioned inventor (George Clooney) and a teenage science enthusiast (Britt Robertson) as they travel to a strange land only available to the dreamers of the world who want to make it a better place. An exercise in corporate synergy and an earnest attempt to inspire the younger generation to tackle Big Problems instead of assuming that we’re all doomed, “Tomorrowland” garnered mixed reviews with some choking on Bird’s reliance on borderline-Randian notions of exceptionalism and ultimately having a lot of effects mask an uneven story, but other critics found a lot to love in both the stunning visuals and its message, which is ultimately in favor of optimism instead of defeatism. For a film based on a theme land at a theme park, it’s got a lot going on in the nuts and bolts.

Other new releases this week include Rick Famuyiwa’s “Dope,” the quirky-yet-still-interesting story of three geeky 90’s-obsessed high schoolers living in Inglewood who accidentally receive a large quantity of drugs that don’t belong to them. Then, there’s the action-packed disaster film “San Andreas” starring The Rock as a Los Angeles Fire Department Air Rescue pilot who has to save his family (and the world) from a massive earthquake that is leaving everything in its wake. After that, there’s Bob Goldthwait’s “Call Me Lucky” about the troubled, but inspiring life of comedian/activist Barry Crimmins. Last but certainly not least, Lionsgate is releasing “The Complete Mad Men” and “Mad Men: The Final Season, Part Two” on Blu-ray today, and since it’s one of the very best TV shows to ever exist, telling the story of life as lived and all the regrets, failures, and intermittent joys in between, it’s well worth your time.

On the classic front, we have quite a few releases. First, from Criterion, there’s two releases: Ettore Scola’s “A Special Day,” starring Sophia Loren and Marcello Mastroianni, about the tentative friendship between a conservative housewife and a liberal radio broadcaster awaiting deportation on the day when Mussolini and the city of Rome welcomed Hitler to their shores; and David Cronenberg’s “The Brood,” about a disturbed woman’s psychotherapy and a five-year-old terrorized by demonic beings. Then, Walt Disney has one of those Diamond Edition versions of its classic “Aladdin” starring the late Robin Williams. 20th Century Fox has the 25th Anniversary edition of Tim Burton’s sweet film “Edward Scissorhands,” starring Johnny Depp when he was good. Warner Bros has a few releases this week: First, there’s Ridley Scott’s “Matchstick Men,” about a con artists with OCD reconnecting with his estranged daughter; second, there’s Peter Weir’s “Witness,” starring Harrison Ford as a detective tasked with protecting a young Amish boy after he witnesses a murder in Philadelphia; and third, there’s “Escape from Alcatraz,” the Don Siegel and Clint Eastwood film about the famous 1962 prison escape from the maximum security prison Alcatraz.

Other classics include a host of releases from Kino Lorber Studios. There’s the release of the 1925 silent horror film “The Phantom of the Opera” starring Lon Chaney; the Sharon Stone thriller vehicle “Scissors”; Wolfgang Petersen’s Hitchcockian thriller “Shattered” starring Tom Berenger; the Burt Reynolds’ CIA drama “Malone”; and another CIA drama “Company Business” but starring Gene Hackman. From Twilight Time, there’s Carl Franklin’s neo-noir “Devil in a Blue Dress” about a WWII veteran (Denzel Washington) who becomes a private investigator to pay the mortgage after being laid off from his job at Champion Aircraft. Then, Universal Studios has the “W.C. Fields Comedy Essentials” collection featuring 18 of his best films only on DVD. Finally, PBS has “Ken Burns’ The Civil War: 25th Anniversary Edition” restored for Blu-ray.

“I get things are bad,” someone says early into the movie. “But what are we doing to fix it?” “Tomorrowland,” at its core, is about the self-fulfilling prophecy of defeatism — the way that gloom and doom predictions about the future have relieved people of the responsibility of caring. (The villain, who students of Ebert’s Law should have no trouble identifying, delivers a pretty pointed monologue about apocalypse apathy.) That’s a nice message for a hyper-visible studio event movie to impart; sending viewers, especially young ones, out on a hopeful note is a noble goal, even within the context of a cross-promotional blockbuster. But who, exactly, will be making these seismic societal changes? As in “The Incredibles” and “Ratatouille,” Bird flirts heavily with exceptionalism, again suggesting a hard line between superior citizens and mediocre masses. That makes “Tomorrowland’s” call to action feel weirdly exclusionary, as though saving the world were a job fit only for the chosen few — the renaissance men and women, the brilliant elite, the George Clooneys of all walks. The fight for the future, like Tomorrowland, is apparently by invitation only. Read more.

Happily, what “Dope” does well, it does extremely well — namely letting Malcolm, Diggy, and Jib hang out together and navigate the world on their own terms. All three leads are charming, and together, they convey a real sense of camaraderie, the kind that only develop between misfits who find each other. Everyone’s happy to marginalize them, so they’ve built their own world within those margins. The best moments of the film have less to do with whether they’ll be able to unload the drugs and save their skins, and more to do with whether Justin Bieber is pretty enough for Diggy to find attractive in spite of her sexual orientation, or whether they’ll be able to explain to a white stoner pal (Blake Anderson of “Workaholics”) that no matter how much they like him, he can’t use the N-word to refer to them. Of the three, Moore is a particular standout, keeping his character grounded even when the film gives him speeches that overstate its themes about identity and expectations. He makes Malcolm real, and entirely his own person, though he’s surrounded on all sides by forces that demand he be someone else. Read more.

Spectacles of disaster have been a staple of movies ever since they began, so I’m not one to complain about them, or to snicker at the supposed irony of Hollywood so blithely exploiting a potential reality (for all I know, the data spouted by a seismologist played by Paul Giamatti in the film’s early scenes could be 100 percent true, and California is in fact overdue to tumble into the sea) for our entertainment value. The personal story attached to this earthquake saga has Johnson’s Ray Gaines, an uber-competent (of course) helicopter rescue dude, saving both his estranged wife and their college bound daughter from the tectonic destruction. Think “Earthquake” meets “Towering Inferno” meets “Die Hard,” but a lot more streamlined. Ray’s wife, Emma (Carla Gugino) has taken up with another fella, extremely rich architect Daniel (Ioan Gruffud), the latter of whom is escorting daughter Blake (Alexandra Daddario) to San Francisco. Plot logic dictates that one of these characters turns out to be a weasel, and the one you expect is the weasel indeed, and to top it off he’s got a really bitchy sister too. While disaster movies of past eras let the viewer build up a nice head of disdain for their weasely characters before suitably dispensing with them, “San Andreas” is both too fleetly action-packed and too damn nice to provide many hisses. Instead, the movie compels Johnson and Gugino to play dodge-em with falling buildings via chopper, mediate some super-size potholes in a four-by-four, do some impromptu sky-diving when there’s suddenly no viable airport runway to land a small plane on, and much, much more. Read more.

“Call Me Lucky”
Criticwire Average: B+

A compelling character, cultural forebear, beloved friend, and unsung comic and activist, Crimmins makes for an intriguing subject. Nevertheless, the film consists mostly of talking heads and decaying video clips. You’ll be the richer for spending time in Crimmins’ company, but the material seems better suited to the small screen. Read more.