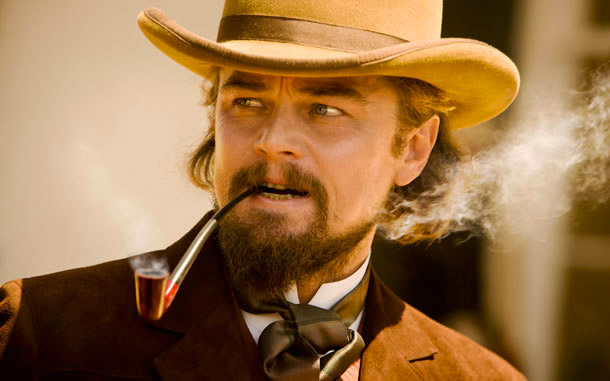 
DiCaprio’s dramatic breakout at age 19 earned him his first Oscar nomination and hinted at his future as one of the best actors in the business. Starring opposite Johnny Depp and Juliette Lewis, DiCaprio earned raves for his turn as Arnie Grape, a young boy with a development disability that results in emotional outbursts and unusual habits, like an obsession with climbing the town’s water tower. Restraint and control are DiCaprio’s biggest strengths here; he never plays up his character’s ticks in ways that feel forced or non-genuine. The commitment to the role and to Arnie’s combative and highly sensitive personality is revelatory for a young actor, and DiCaprio finds a lovable innocence in the boy that speaks directly to every viewer’s experiences as lost and imaginative teens. Arnie may find trouble in communicating with the outside world, but in DiCaprio we see every troubled and elated emotion under his skin.


Two years after becoming a promising actor to watch in “What’s Eating Gilbert Grape,” DiCaprio secured his reputation as a performer with Method tendencies three times his age in Scott Kalvert’s dark coming-of-age drama. Based on the autobiography of the same name, DiCaprio stars as Jim Carroll, a New York City teenage basketball prodigy whose prosperous athletic future is destroyed when he falls in with the wrong crowd and gets addicted to heroin. Such adult subject matter would seem to be an anvil for a young performer, but DiCaprio succeeds in filling Carroll’s downward spiral with freewheeling destruction and painful loss. As more and more of his life goes awry — a friend develops leukemia, a coach abuses his power, his mother and classmates become increasingly concerned, much to his annoyance — Caroll loses out on his dream. While the script forces third-act redemption, DiCaprio makes every moment believable with his trademark authenticity, no matter how troubled or emotionally corrosive.


Pre-“Titanic” and post-“Gilbert Grape,” DiCaprio starred alongside Claire Danes in Baz Luhrmann’s vibrant and electrifying take on the classic tale of star-crossed lovers, mercurial families and tricksy poisons. DiCaprio was at his — dare we say it — most dreamy in the feature, and the passion that infused his Romeo’s relationship what Danes’ luminous Juliet reinvigorated a story that’s been told plenty of times before. Combining romantic passion, unbridled lust and just the right amount of war-mongering violence, DiCaprio gave the world a brand new version of a beloved literary hero. Using Shakespeare’s original lines only added to the power of the film, and although it may have been alike in dignity to other adaptations, the ingenious joining of DiCaprio and Danes placed it a cut above the rest.


Before Dicaprio was an eternally Oscar-less thespian, he was a blonde-haired, blue-eyed, baby-faced heartthrob. In “Titanic,” Leo is downright swoon-worthy as the starry-eyed, working class Jack, who sweeps the aristocratic Rose (Kate Winslet) off her feet and into a whirlwind romance that meets its tragic end as “the ship of dreams” sinks into the sea. “Titanic” represents a kind of perfect collision for the actor; he juggles the swooning boyish charms of the conventional romantic lead with the more nuanced acting that he has become famous for. DiCaprio is dreamy and innocently romantic, but in a way that makes his love at first sight for Rose seem authentic and real. The millions of moviegoers that flocked to “Titanic” and weeped over Jack’s frozen, lifeless body as it sank into the North Atlantic have DiCaprio to thank for the sensitive and moving romance that made them believe in love again.


Leonardo DiCaprio is Frank Abagnale, Jr.: a doctor, lawyer, co-pilot, master of deception, brilliant forger, bank robber and teenager. Yes, teenager. Frank forged his medical degree, law degree and piloting license all before he was 18 years old. DiCaprio brings this infamous real-life character to life through his trademark charm and charisma, which would deceive anyone who fell under his infectious spell. Continuously out-running and outsmarting Tom Hanks’ character until the end, DiCaprio takes his character through a downward spiral from cockiness to paranoia to manic obsession in becoming someone he is not. As with all DiCaprio movies, it’s hard not to feel sympathy towards his tragically-flawed character. Abagnale is quite the con artist, and the actor has a field day juggling the different layers — the extrovert showmanship and the introvert vulnerability — of each moment he finds himself in.


“Gangs of New York” marks the first collaboration between Leonardo DiCaprio and Martin Scorsese, telling the story of Irish immigrant Amsterdam Vallon as he goes up against infamous gang leader Bill Cutting (Daniel Day-Lewis) to avenge his father amidst the turmoil of 1860’s New York City. DiCaprio knows he can’t possibly match Daniel Day-Lewis (who could?) and keeps his portrayal of a frustrated, rough-and-tumble young immigrant more controlled than one would expect. As he conspires against Cutting to carve out a piece of New York for himself, DiCaprio’s lust for revenge remains believable and never feels comically overwrought. “Gangs of New York” is a well-constructed period piece that uses an oft-ignored era of American history to build tension to strikingly violent ends.


Martin Scorsese has long been a master at shattering the masculine complex (see “Taxi Driver”), which was probably part of the reason he was so attracted to the true story of American business magnate Howard Hughes. Chronicling Hughes’ genius through a handful of his most ambitious projects, Scorsese and his modern muse DiCaprio never lose sight of the biopic’s structural spine: Hughes’ mental breakdown and escalating obsessive-compulsive disorder. The more fame, money and success the entrepreneur secures, the more paranoia and depression derail his very existence. Mental breakdowns on film have been mined for all sorts of emotional experiences, but DiCaprio cuts right to the soul of it and exposes its utter tragedy. Hughes’ forward-thinking mind allowed him to seize the American Dream and lose it all in a storm of mental anguish. He was as intellectually stimulated as he was emotionally crippled, and the contradictions that fueled his success and downfall are what make DiCaprio’s turn here a performance of the highest order.


Leonardo DiCaprio flexes his Boston accent as Billy Costigan, a cop recruited to go undercover with Irish Mob boss Frank Costello (Jack Nicholson). The pair are loosely based on the story of Whitey Bulger and John Connelly, the subjects of this year’s film “Black Mass,” and the script is adapted from the Hong Kong crime thriller “Infernal Affairs.” DiCaprio and Nicholson together are even better than the sum of their parts, as the almost paternal dynamic of mentorship begins to break down and Costello’s suspicion builds. The stakes are high for Costigan as the boss learns there’s a mole in his operation, and Costigan has to stay close enough to the man to learn his secrets without revealing his own. Ultimately, Costigan ends up concerned for his life as he worries his cover — and his sanity — are slipping.


In “Revolutionary Road,” Leonardo DiCaprio and Kate Winslet reunite more than a decade after “Titanic” as a once-alternative couple who have settled into 1950’s suburban life. “Settle” hardly fits their situation, as April (Winslet) is tortured by the monotony of being a housewife and Frank (DiCaprio) feels hopelessly trapped by his 10-hour work day at a job he hates. As tension in the supposed suburban paradise comes to a boiling point, the couple head toward an explosive rejection of their quietly enforced conformity. “Revolutionary Road” is remarkable in that a duo so heavily associated with “Titanic” manages to entirely divorce itself from the blockbuster’s looming shadow. The twinkle in DiCaprio’s eye is gone as he fully embodies a man who is deeply unhappy with his life and genuinely confused at why he feels the way he does and how he ended up in such a situation. Despite all the fanfare surrounding his more “intense” roles, “Revolutionary Road” contains DiCaprio’s most understated and daring dramatic performance — its a retaliation that hits like a wrecking ball.


For a director whose film efforts have turned up curiosities as varied as the maniacal Mr. Blonde (“Reservoir Dogs”), the biblically inclined Jules Winnifield (“Pulp Fiction”) and the wonderfully profane O-Ren Ishii (“Kill Bill Vol. 1”), it’s a testament to DiCaprio’s acting clout that the sadistic and genteel Calvin Candie could rank among Tarantino’s most memorable characters, and yet there’s no question that the evil plantation owner has earned his spot. Despite the film’s five nominations and two Oscar wins, the perennially snubbed DiCaprio was passed over for a nomination in favor of Christoph Waltz’s eccentric Dr. Schultz, but Leo’s barbarous slave-fighting and ready-to-blow Calvin Candie is one of Tarantino’s most venerable villains — the director himself has called him his most unlikable character ever. And though he has precious little screen time, DiCaprio’s performance, which famously includes a scene in which he slices his hand open on broken glass only to continue delivering his lines with terrifying fortitude, remains indelible proof of the actor’s chameleonic abilities.

This Article is related to: Features and tagged Catch Me If You Can, Django Unchained, Gangs Of New York, Leonardo DiCaprio, Lists, Revolutionary Road, Romeo & Juliet, The Aviator, The Departed, Titanic