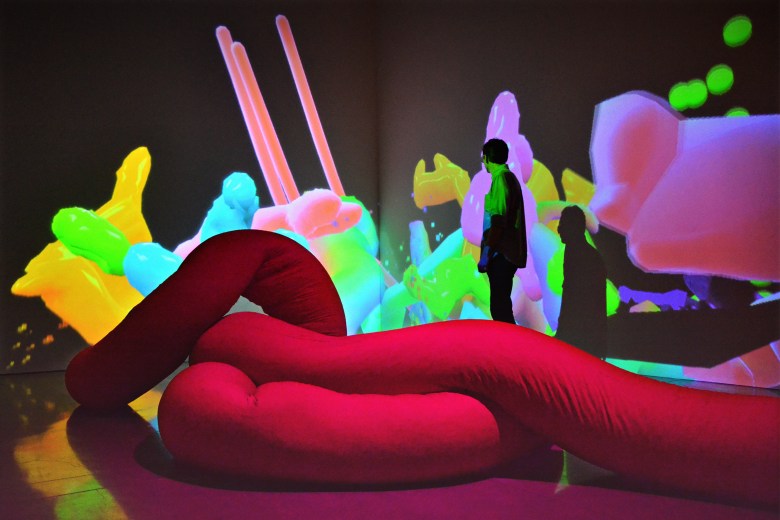 The Slamdance Film Festival is embracing the digital future with a new showcase planned for December titled DIG (Digital, Interactive and Gaming). In what is being cited as an “innovative new showcase,” DIG will shine a light on emerging independent artists working in hybrid, immersive and developing forms of digital media art. Works included in the event range from short films made for virtual reality to Cubist-inspired video art pieces and video games being developed for PlayStation and the personal computer.

Ten works will feature in the inaugural DIG show, hosted by Big Pictures Los Angeles. DIG opens December 4 from 5-9PM. Admission is free and open to the public. The show will also be featured at the Slamdance Film Festival in Park City that runs from January 22-28, 2016.

“We deleted the rules and regulations to help encourage and find emerging artists pushing and breaking the boundaries of interactive storytelling through digital media and technology,” said Slamdance President and co-founder Peter Baxter. “We hope people coming to the show will find as much curiosity, fun and appreciation interacting with the work as we did programming it.”

“Pry”
by Tender Claws (Danny Cannizzaro & Samantha Gorman)
Six years ago, James – a demolition expert – returned from the Gulf War. Explore James’ mind as his vision fails and his past collides with his present. “Pry” is an app hybrid of cinema, gaming and fiction that reimagines how we might touch, close and pry into a text, moving seamlessly among words and images to explore layers of a character’s consciousness.
“The Visitor”
Directed by James Kaelan; Cinematography by Eve Cohen; with Aaron Ramzi and Sarah Himedah
At an austere compound in the desert, a woman waits for her greatest fear to arrive.
“SLEIGHTING”
by Rachel Ho
“Sleighting” is an unprecedented approach to multimedia performance using motion capture and previsualization tools to enable a new breed of performer. It is about showmanship, hype and the future of entertainment.
“Woman Without Mandolin”
by Fabiano Mixo
The artwork rethinks cubism as a film medium by using digital motion compositing, combined with a visual concept that captures several perspectives of the same subject using different camera angles. In the film, the choice of Picasso’s “Girl with Mandolin” confronts the European art context with the evident influence of African art and the vigour of black culture. As a portrait it displays the formalistic methods and aspects of Cubism, expressed through a strong woman: the conscience, the feelings and the memories of different cultures and history.
“Simulacra”
by Theo Tagholm
“Today abstraction is no longer that of the map, the double, the mirror, or the concept. Simulation is no longer that of a territory, a referential being, or a substance. It is the generation by models of a real without origin or reality: a hyperreal […] It is the real, and not the map, whose vestiges persist here and there in the deserts that are no longer those of the Empire, but ours. The desert of the real itself.” Simulacra and Simulation, Jean Baudrillard
“Thumper”
by Drool
“Thumper” is a rhythm violence game. It combines classic rhythm-action with speed and physicality. You control a space beetle while careening towards confrontation with an insane giant head from the future.
“Memory Of A Broken Dimension”
by Ezra Hanson-White (XRA)
The emulator of obscure research software is spreading across the internet, origin unknown. Following a trail of files littering the RELICS virtual desktop; you trespass into the ruins of a fragmented world, suspended within a frozen data stream. But when the stream begins to thaw, no system can handle this overflow.
“Apoptosis”
by Kytten Janae
An interactive experience revolving around themes of death, mental health, remorse and belonging.
“Line Wobbler”
by Robin Baumgarten
Line Wobbler is a one-dimensional dungeon crawler game with a custom wobble controller made out of a door-stopper spring and a five meter long ultrabright LED strip display. The game is a one-dimensional dungeon crawler where the player navigates obstacles and fights enemies to reach the exit of a series of increasingly difficult levels.
“TL;DR [the shape of the internet (Orgy)]”
by Theo Triantafyllidis
“TL;DR [the shape of the internet (Orgy)]” is an immersive interactive installation. On entering the space, the viewer is confronted by a 40foot long soft noodle and a surround 3-wall projection. The projection is composed of various colorful abstract biomorphic creatures that are animated live by a physics engine. Viewers are invited to touch, poke, squish, hug and push the noodle around. When that happens, the movements of the noodle are translated in motion for the projected creatures. The more the audience plays with noodle, the crazier the projection and reactive soundtrack becomes, building up to a big surprise.

This Article is related to: News and tagged Slamdance Film Festival