'Hamilton' the Musical, Or How To Love Something You Cannot See 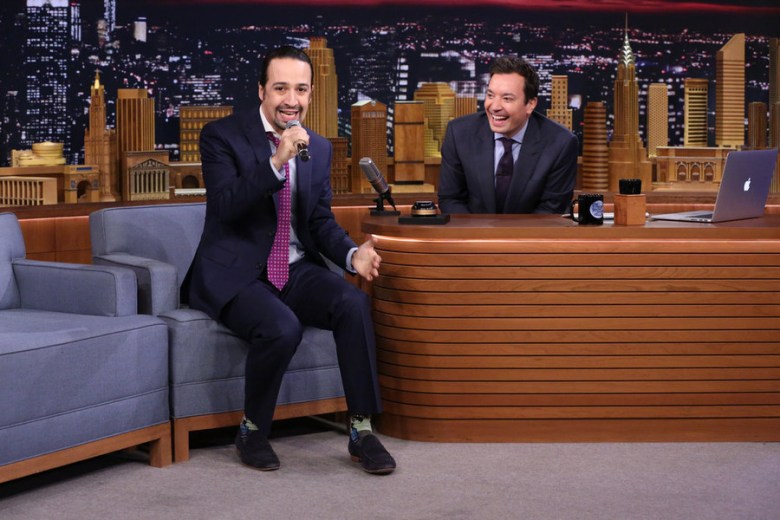 Last Friday, a charming fellow named Lin-Manuel Miranda appeared on “The Tonight Show,” and while host Jimmy Fallon has never been tempered in his enthusiasm for any subject matter imaginable, his excitement over having Miranda there was profound. “It’s exactly what should be happening right now!” he exclaimed about Miranda’s current project. “It sounds ridiculous, but it’s so brilliant!”

Unfortunately, for many many people, they’ll never get to find out for themselves. Or maybe they will? That’s the fascinating question we find ourselves presented with, thanks to Miranda’s brilliant blockbuster Broadway musical “Hamilton.”

READ MORE: Cary Fukunaga Explains Why He Knew He Needed to Cast a Non-Actor in ‘Beasts of No Nation’

If you haven’t heard about it yet, “Hamilton” is a musical about Alexander Hamilton, one of America’s founding fathers. His face is on the ten dollar bill, because while he never became President or rose to an office higher than Secretary of Treasury, he was hugely influential in not only helping to win the Revolutionary War, but in establishing the Constitution and guiding Washington’s first administration to create a national bank. He died as the result of a duel of honor with his longtime rival Aaron Burr, a fact that you might only know due to a milk commercial from 1993. “Hamilton” tells the story of all of this. It does so, at times, with rap battles.

“Hamilton” is indisputably the creation of Lin-Manuel Miranda, who wrote the book, music and lyrics, and currently plays the title role. Miranda might be familiar to TV super-nerds for his appearances on shows like “House” and “How I Met Your Mother” (which featured him both acting and demonstrating his innate talent for flow). But he’s also one of Broadway’s biggest stars, having won multiple Tonys for his first original musical, “In the Heights,” and now serving as almost an ambassador for the notion that musical theater can be culturally relevant beyond the walls of the theater.

The catch, of course, is that its cultural relevance is handicapped by the fact that, well, it’s a Broadway musical. Sure, it didn’t start out that way (Miranda first debuted it at the Public Theater, after years of developing what was then known as “The Hamilton Mixtape”) but now is when the celebrities are screaming the show’s praises, and now is when tickets are impossible to get. (Fallon is actually a bit late to the game — Retta was an early adopter.)

The Quest for “Hamilton” Tickets is now an epic ballad I’ve heard many people sing over the past few months — beyond the one jerk I know who happened to win lottery seats (that’s right, Matthew, I’m talking to you), the story ends in disappointment and/or hundreds of dollars being spent. The pre-show lottery does give those without excess cash a (small) chance at getting a seat (damn it, Matthew, you won TWICE???? WHAT THE HELL, MATTHEW?!?), but let’s get real.

Unless you’re a jerk like Matthew, or one of the 20,000 AP US History students who the Rockefeller Foundation is enabling to see the show over the next year, or someone willing to spend probably a minimum of $200 per ticket, you’re not seeing “Hamilton” anytime soon. That said, “Hamilton” is still having a cultural moment, on par with any great cult TV show or crowd-pleasing film. Why that is, and the how of it happening, is fascinating.

Right now, us non-Matthew people are able to get a taste of what we’re missing, thanks in part to social media: For those looking to get even closer to the action, to understand not just the show but its performers and the cult(ure) that has been built up around it, there are the #HAM4HAM shows — quick stage door performances led by Miranda and the cast that, thanks to camera phones, take intimate moments between creator and audience and make them available for the world. These shows have been happening all summer long — the Daily Dot has an amazing round-up of them.

There’s also the increasingly fervent media coverage surrounding “Hamilton.” Just this weekend, “60 Minutes,” CBS’s most reliable old saw of a news program, featured a segment where Charlie Rose saw “Hamilton,” spoke with Miranda and reported on his findings. That feature, plus an additional online-only segment which documented the cast recording, was filled with B-roll featuring not just the show’s music, but the actual choreography and production of the show.

But the real basis of “Hamilton” fandom right now, for anyone who’s not that jerk Matthew (C’MON, MATTHEW), comes down to the original Broadway cast recording. Released last month, the soundtrack, featuring Miranda, Leslie Odom Jr., Jonathan Groff and the rest of the talented and diverse cast, actually holds up as a complete narrative — Hamilton’s life story as connected to the rise of America manages to play as an audio-only experience.

The “Hamilton” cast album, available on iTunes, Spotify and even YouTube, is beautifully produced by (as it just so happens) by The Roots, the “Tonight Show” house band — during his time with Jimmy Fallon, Miranda praised their versatility (the musical covers a range of genres) as a reason for why he wanted them to craft the album.

It’s not hard to figure out why making the best possible cast album meant a lot to Miranda — as he told Charlie Rose, his love of musical theater didn’t come from attending the theater. “I grew up not seeing Broadway shows but loving cast recordings,” he said, before playing Rose a number from “Camelot” as an example of “the dopest beat you’ll ever hear in your life.”

In a Jezebel piece posted the week the cast album premiered, writer Julianne Escobedo Shepherd made the case for not listening to it without seeing the show first. She freely admitted that she’d seen “Hamilton” twice already (like that jerk Matthew!!!), so she speaks from a position of privilege. But it’s an interesting point, especially because of the clash that might occur, between what someone who listens to the cast album might anticipate from the show, and what the reality is.

And that’s one of the most interesting things about the “Hamilton” obsession that’s been spreading. One of theater’s most profound elements is the fact that it’s ephemeral — making for transcendent moments, but also meaning that mistakes don’t last. (As Indiewire previously discussed with “The Leftovers” star Carrie Coon, it’s one of the major ways that theater stands apart.)

Meanwhile, one of the things about television I enjoy the most is the way that it serves as a medium for creating cultural moments on a national, even global scale. In general, the evolution of pop culture, in general, has been towards the rise of media that is freed from geography. But now we see the rise of a new thing — media freed from even authorial voice.

On the one hand, “Hamilton” is truly tethered to its origins in the theater. But through the cast album and the other glimpses we’ve gotten of it, it’s become something more, and bigger, and yet more intimate. As Miranda put it on “60 Minutes”: “You’re going to imagine your own vision because it’s tough to get a ticket.” Only a small percentage of “Hamilton” fans, I’d wager, have actually seen the show. But just because you’re not in the room when it happens doesn’t mean you can’t discover how special it is.