Here Are All the Movies Opening Today, November 13; What Will You See? 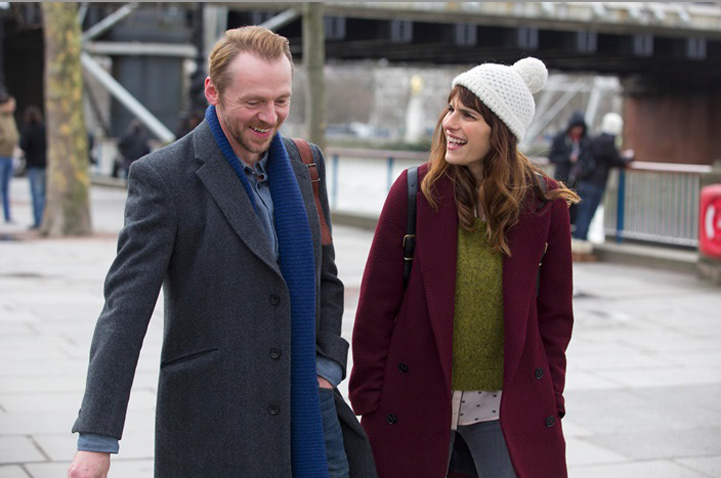 Here are the films opening theatrically in the U.S. the week of Friday, November 13. All synopses provided by distributor unless listed otherwise.

My All American
Director: Angelo Pizzo
Cast: Finn Wittrock, Aaron Eckhart, Sarah Bolger, Robin Tunney, Michael Reilly Burke, Rett Terrell, Juston Street
Synopsis: “What Freddie Steinmark wants most in the world is to play football. Deemed too small by the usual athletic standards, his father trains him hard, and Freddie brings a fight to the game that ultimately gets him noticed — by none other than legendary University of Texas coach Darrell Royal. Awarded a scholarship and a chance to play for the Longhorns, Freddie sets off to Austin with his loving high school sweetheart Linda, determined to make the team. Alongside his old teammate Bobby Mitchell and new pal James Street, Freddie is put through the paces of a grueling practice schedule, but the boys’ camaraderie off the field translates into solid playing on it, and they rise up the depth charts, giving the Longhorns a real chance to turn around their losing record. But just when they’re reveling in the success of the season, Freddie suffers an injury that leads to a shocking diagnosis and the biggest challenge he will ever face.”
Criticwire Grade Average: C+ (4 reviews)

Ayanda
Director: Sara Blecher
Cast: Fulu Moguvhani, OC Ukeje, Nthati Moshesh, Kenneth Nkosi, Jafta Mamabolo, Thomas Gumede, Sihle Xaba, Venessa Cooke
Synopsis: “In a vibrant and diverse Johannesburg community, 21-year-old Afro-hipster Ayanda has a knack for taking neglected pieces of furniture and ‘bringing them back to love.’ Eight years after her father’s death, she is determined to revive his prized garage, which is in deep debt and in danger of being sold.” [LA Film Festival]
Theatrical Release: Los Angeles

By the Sea
Director: Angelina Jolie Pitt
Cast: Angelina Jolie, Brad Pitt, Mélanie Laurent, Melvil Poupaud, Niels Arestrup, Richard Bohringer, Laurence Rickard
Synopsis: “Set in France during the mid-1970s, Vanessa, a former dancer, and her husband Roland, an American writer, travel the country together. They seem to be growing apart, but when they linger in one quiet, seaside town they begin to draw close to some of its more vibrant inhabitants, such as a local bar/café-keeper and a hotel owner.”
Criticwire Grade Average: C- (5 reviews)
Theatrical Release: Various (including New York and Los Angeles)

Casa Grande
Director: Fellipe Barbosa
Cast: Marcello Novaes, Suzana Pires, Thales Cavalcanti, Bruna Amaya, Alice Melo, Clarissa Pinheiro
Synopsis: “Amidst pressure from his parents to choose his future career and study for the university entrance exams, Jean ends up falling in love with Luiza, a mixed-race girl in a nearby (but less regarded) school. As Jean and Luiza get to know each other, it becomes apparent that Jean’s father Hugo is trying to hide the demise of his hedge fund company. As their new reality sinks in, Hugo begins to fire his most trusted staff and to cut back on essentials at home. But despite everyone’s best efforts (Jean’s mother Sonia even takes a job selling cosmetics), this family’s economic troubles end up threatening their very survival.”
Criticwire Grade Average: A- (4 reviews)
Theatrical Release: New York

Condemned
Director: Eli Morgan Gesner
Cast: Dylan Penn, Ronen Rubinstein
Synopsis: “Fed up with her parents’ bickering, poor-little-rich-girl Maya moves in with her boyfriend who is squatting in an old, condemned building on Manhattan’s Lower East Side. With neighbors that are meth heads, junkies and degenerates, this depraved hell hole is even more toxic than it appears: After a virus born from their combined noxious waste and garbage infects the building’s residents, one by one, they succumb to a terrifying pathogen that turns them into bloodthirsty, rampaging killers and transforms their building into a savage slaughterhouse.”
Theatrical Release: New York and Los Angeles

Cut Snake
Director: Tony Ayres
Cast: Sullivan Stapleton, Alex Russell, Jessica De Gouw, Megan Holloway, Kerry Walker, Robert Morgan
Synopsis: “Set in Melbourne in the mid-1970s, ‘Cut Snake’ tells the story of Sparra Farrell, a very private young man who is trying to make a life for himself in a new city. He has found honest work and becomes engaged to the outgoing and charismatic Paula. But the prospect of his new life is challenged when the charismatic Pommie tracks him down. Sparra finds himself drawn back into a world that he thought he had left behind.” [Toronto International Film Festival]
Theatrical Release: Los Angeles

Dangerous Men
Director: John S. Rad
Cast: Anneli Aeristos, Paul Arnold, Mark Besharaty, James Brockman, Melody Wiggins, Allen Perada, Tripp Law, Kelay Miller
Synopsis: “After Mina witnesses her fiancé’s brutal murder by beach thugs, she sets out on a venomous spree to eradicate all human trash from Los Angeles. Armed with a knife, a gun, and an undying rage, she murders her way through the masculine half of the city’s populace. A renegade cop is hot on her heels, a trail that also leads him to the subhuman criminal overlord known as Black Pepper.”
Theatrical Release: Various (including New York and Los Angeles, Austin, Dallas, Denver, Kansas City, Nashville, Phoenix, Portland, Seattle and Tuscon)

Entertainment
Director: Rick Alverson
Cast: Gregg Turkington, John C. Reilly, Tim Heidecker, Tye Sheridan, Michael Cera, Amy Seimetz, Lotte Verbeek
Synopsis: “An aging comedian tours the California desert, lost in a cycle of third-rate venues, novelty tourist attractions, and vain attempts to reach his estranged daughter. By day, he slogs through the barren landscape, inadvertently alienating every acquaintance. At night, he seeks solace in the animation of his onstage persona. Fueled by the promise of a lucrative Hollywood engagement and the possibility of rekindling a relationship with his daughter, he trudges through a series of increasingly surreal and volatile encounters.” [Sundance Film Festival]
Criticwire Grade Average: B (21 reviews)
Theatrical Release: New York and Toronto (expands to 18 additional markets through December)

Funny Bunny
Director: Alison Bagnall
Cast: Kentucker Audley, Joslyn Jensen, Olly Alexander, Anna Margaret Hollyman, Josephine Decker, Louis Cancelmi, Grace Gonglewski, Nicholas Webber, Caridad de la Luz
Synopsis: “Gene spends his days canvassing about childhood obesity and the billions of dollars wasted each year on junk food subsidies. Gene meets Titty, an emotionally-arrested 19-year-old who has successfully sued his own father to win back a large inheritance, getting himself disowned in the process. Gene discovers that Titty has an ongoing online relationship with the beautiful agoraphobic Ginger, who is an animal activist. Gene convinces Titty to make a pilgrimage to meet Ginger. Gene quickly begins to fall for the enigmatic Ginger, despite the fact that his goal was to deliver her up to his new friend Titty. But Ginger has no intention of being delivered up to anybody.” [SXSW Film Festival]
Criticwire Grade Average: B- (4 reviews)
Theatrical Release: New York

Ingrid Bergman – In Her Own Words
Director: Stig Björkman
Synopsis: “A personal portrait of mythical and controversial actress Ingrid Bergman based on her many home movies and diaries.”
Theatrical Release: New York

Kilo Two Bravo
Director: Paul Katis
Cast: Mark Stanley, David Elliot, Malachi Kirby, Paul Luebke, Ali Cook, Benjamin O’Mahony, Scott Kyle, Andy Gibbins
Synopsis: “A British soldier detonates a land mine and sets into motion a desperate rescue mission. His fellow Paras come to get him out, only to find themselves trapped in a minefield, with seemingly no way out…. A day in which the heroism of their leader, Corporal Mark Wright, shone through with tragic consequences. Out of the tragedy came extraordinary tales of bravery and selflessness, not only of Corporal Wright but also his comrades, who risked their own lives to help their friends.”
Theatrical Release: Various (including Atlanta, Dallas, Denver, Detroit, Houston, Kansas City, Phoenix, Tampa and Toronto)

Man Up
Director: Ben Palmer
Cast: Lake Bell, Simon Pegg, Rory Kinnear, Ken Stott, Harriet Walter, Olivia Williams, Sharon Horgan, Ophelia Lovibond, Henry Lloyd-Hughes
Synopsis: “A 34 year old single woman, Nancy, hung-over again, exhausted by the endless fruitless set ups by her friends, traveling across London to toast another 10 years of her parent’s successful happy magical marriage runs in with a 40 year old divorcee, Jack, who mistakes her for his 24 year old blind date. Nancy, deciding to go with it, happens to hop on the most chaotic yet hilarious journey of her life which neither of them will ever forget.”
Criticwire Grade Average: B+ (7 reviews)
Theatrical Release: New York and Los Angeles

Song of Lahore
Directors: Andy Schocken & Sharmeen Obaid-Chinoy
Synopsis: “Until the late 1970s, the Pakistani city of Lahore was world-renowned for its music. Following the Islamization of Pakistan, many artists struggled to continue their life’s work. ‘Song of Lahore’ turns the spotlight on a group of stalwart musicians that kept playing and ultimately attracted listeners from around the world.”
Criticwire Grade Average: B+ (5 reviews)
Theatrical Release: New York and Los Angeles

Steve McQueen: The Man and LeMans
Directors: John McKenna & Gabriel Clarke
Synopsis: “By 1970, Steve McQueen ruled Hollywood; he was at the top of his game, commanding respect from and wielding power over industry executives and A-list talent. Hot off the back of classics like ‘The Magnificent Seven,’ ‘The Great Escape’ and ‘The Thomas Crown Affair,’ McQueen had established himself as Hollywood’s swooning anti-hero, the King of Cool and the world’s most notorious ladies’ man. A racing fanatic, his already-legendary status allowed him to begin production on a passion project centered around the greatest test of driving skill in the world: Le Mans, a 24-hour car race in France. But when the shoot was plagued by financial troubles, on-set rivalries and rumors of his affairs, McQueen’s personal life began to unravel and his dream film quickly turned into a nightmare.”
Theatrical Release: New York and Los Angeles (opens in Pittsburgh on November 27)

Sweet Micky for President
Director: Ben Patterson
Synopsis: “The film follows Pras Michel, Grammy award-winning rapper and founder of the hip-hop group The Fugees, as he returns to his homeland of Haiti post-earthquake and finds a corrupt government in paralysis. With no experience or money, Pras passionately mobilizes a presidential campaign for the unlikeliest of candidates: Michel Martelly, aka ‘Sweet Micky,’ Haiti’s most popular and most outlandish pop star. The idealistic and politically inexperienced pair set out against a corrupt government, civil unrest, and a fixed election system to change the course of Haitian history. When Pras’ former bandmate—superstar Wyclef Jean—also enters the presidential race, their chances seem further doomed and the story takes on the wild twists of celebrity drama.” [LA Film Festival]
Theatrical Release: Los Angeles (opens in New York on November 20th)

Missed last week? Here are all the releases from the weekend of November 6th.