'Nightly Show' Writers, Producers and Host Larry Wilmore Get Real About What the Show Means for the Country 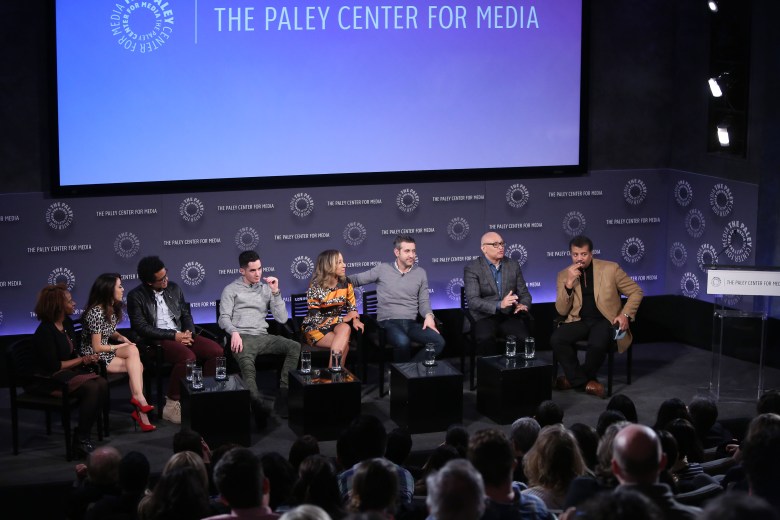 In honor of the New York Comedy Festival, the “Nightly Show” writers and producers, and, of course, host Larry Wilmore participated in a panel discussion moderated by Neil deGrasse Tyson.

READ MORE: Watch: ‘The Nightly Show With Larry Wilmore’ Teases More About What It Isn’t Than What It Is

Featuring host Larry Wilmore, executive producer Rory Albanese, head writer Robin Thede, writers Holly Walker and Jordan Carlos, and contributors Ricky Velez and Grace Parra, the staff shared their thoughts on how the show has been received. They also shared little snippets of how things work backstage in structuring the show. Highlights from this insightful panel are included below:

The show’s cultural moment is coming.

“You think of the ‘Daily Show’ the way you think of it now, but no one thinks of the ‘Daily Show’ the way they thought about it in 1999 when Jon had first started on it,” executive producer Rory Albanese mentioned to Indiewire before the panel. “I feel like we’re starting to notice fans, and what I think is really impressive is I look at our audience on a nightly basis and it’s so diverse. I don’t just mean in race and gender, I mean in age. You can’t believe the group of people who are hanging out and enjoying the show together. To me that’s been the impact.”

“As far as the show itself, having this cultural moment yet, it will,” he added. “We’re on pace for it, it just has to happen. It takes a while for these things to catch on and for people to notice. Every night we’re consistently doing a really good show and if you tune in you’ll be impressed every night. But it’s a new era in late night and there’s a lot of new people being discovered, so it will take a little while for that moment for people to say ‘wow, the ‘Nightly Show’ is this cultural juggernaut for this thing.’ I think it’s coming because we’re really starting to hit it. Particularly, the election I feel like we’re really on point with that so I’m excited.”

“I would say that I feel like it’s become a destination for people,” writer Jordan Carlos told Indiewire before the panel. “Let’s say you’re concerned with the Black Lives movement, if you’re concerned with [being] black on campus. Speaking to those concerns, people want jokes about what they care about. They want comedy about what they care about, and they want a destination. They want to hear some kind of monologue joke or insight or something or somebody hashing it up because, in the end, people want to be like ‘hey man, yes thank you, you’re experiencing what I’m experiencing’ and that relation I think is good. You’ve got to laugh to keep from crying — especially after the events that happened [in Paris]. People need that.”

“I think Jon Stewart is a genius — he sees the need for things and he saw the need for this show,” head writer Robin Thede shared with Indiewire. “Because as much as the ‘Daily Show’ covered all issues. I think he saw a void in having an African American host being able to speak about things authentically. After Ferguson and all these things kept happening, I think he saw the need for a show that could tackle race issues, social issues, gender issues, economic issues in a different way. It’s cool we’re able to do that.”

Behind the magician’s curtains.

“Larry is a professional magician — he wouldn’t say professional, I think he says amateur, but he’s amazing,” Thede mentioned to Indiewire. “Whenever he has magic on the show, it always makes me laugh. We started doing this thing called black reacting, where black people just react in crazy ways to magic because it’s true, black people are scared of magic, we don’t like it [laughs]. We don’t know how it works and so we tend to run away when it happens. We actually did that on the show the other day, it was very fun. I can’t even pick out one singular moment. If something is funny to us, we just do it. And it’s so nice to be able to do that, I don’t think a lot of shows can say that.”

“Originally the idea of the show was just to be a panel show,” Albanese told Indiewire. “The idea was just to have everybody sitting around and talking about things. But we started to realize that by just doing that we’re eliminating so many of Larry’s strengths, which are hearing what he thinks about things and his point of view. He has lived through some real stuff and he should be able to put out his arguments and his cases on things first and then hear from some people. The panel component of it is almost a holdover from the original idea of the show, which was just a panel show. So we said ‘well, we don’t have to just do a panel show, we’re missing out on so many unique opportunities by just doing that’ in writing scripts and stuff. The panels that we’re doing now are still a work in progress actually. We’re still trying to figure out the best dynamic. But I think the thing that makes it so fun on any given night is just having Larry in there.”

“[‘Keepin’ it 100′] was Larry’s idea. It was one of those things where that was just something he used to talk about all the time,” continued Albanese. “It was one of those things where they always make fun of me, the expression is called Columbusing: when a white guy learns about something in black culture that he didn’t know about. I Columbused Columbusing. ‘Keepin’ it 100′ for me, I remember him bringing it up in a meeting and he was like ‘we got to make sure people are keeping it 100’ and I went ‘definitely, we should definitely make sure people are keeping it 100.’ Then I turned to Robin and I was like ‘what’s keeping it 100? I don’t know what that is.’ I use it all the time now. It’s actually really clarified a lot for me about what comedy is, which is if you’re not keeping it 100 then what’s the point?”

“Jon Stewart pitched the show and he just felt like there should be a show on TV that had voices that don’t always get a chance to be heard,” said Larry Wilmore. “And that’s where the genesis of the show came from. It was originally called ‘Minority Report,’ actually that was the original name. Then Fox picked up a show called ‘Minority Report.’ Then we had to lose the name so we thought ‘Well let’s see, the show’s on every night, oh ‘Nightly Show,’ that sounds like it’ll be a good show.’ It’s our mission of the show, to tackle the things that are scary.”

Comedy helps with the grieving process.

“I love the fact that once you make someone laugh then, more than likely, their heart and mind are then open to the information that otherwise they would not be able to access,” writer Holly Walker shared with Indiewire. “If you’re lecturing someone about a subject they can completely shut down, but if you open it up into a comedic way they’re more receptive to ideas. I look at comedy as also very medicinal, it’s also a great way of escaping the hardships that are going on. And after being able to escape it for a minute or two, you can then perhaps think of a new solution of how to deal with your big life or deal with whatever situation is going on. It’s always been that drug for me that’s been amazing.”

“Events like Paris, Charleston and the first Paris event; tragic events are very tough because you’re reacting in real time, people are in the middle of grieving,” Wilmore told Indiewire. “How do you do a comedy show under those circumstances? It’s really very difficult. That’s one of the toughest things to do.”

“I think it’s about to be what happened this weekend,” Thede added. “When I was watching what was happening in Paris I just thought ‘how in the world are we going to talk about this?’ And I don’t know if we are, we still haven’t had that conversation. Anytime there are shootings or bombings, people losing their lives for stupid reasons because of hate. It tears us apart as a world and hopefully with our comedy we can try to heal. That’s the hardest stuff, when there’s children involved and when there’s just senseless violence. That’s really hard.”

The journey of one’s career.

“Early ‘Saturday Night Live,’ some of the writers were performers on that show,” said Wilmore. “And actually I worked on a little show called ‘The Office’ and many of the writers on that show, we were also performers on the show. I love it because people know the point of view already, and plus on our show it’s a panel show where people get to discuss things and we have such an interesting group of characters anyways. It’s fun to have them on the show, talking about some of these issues.”

“Sometimes you have to be angry about something,” Wilmore continued. “I worked with Jon Stewart for a long time and I remember when I was first doing the show Jon would get mad at me and said ‘Larry, you’ve got to be a host, man,’ then he said ‘Stop being a host, you’ve got to be yourself up there, whatever it is you’re passionate about, just be passionate about. It doesn’t matter how it comes out.'”

“It was out of the frustration of Hollywood wanting to pigeonhole black performers into one type of thing. You had to be ‘urban’ as they called it and come from a certain point of view,” Wilmore continued. “And that point of view was ‘if we think you’re from the ghetto but you seem wise then that’s cool. But if you’re just smart, we’re not that interested.’ […] It’s important for people of color, whether it’s black men or black women, to control the narrative, to be the people behind the scenes also controlling what it is we’re watching and what we’re doing. And I thought ‘I should be one of those people and instead of Hollywood finding me, I can find them.'”

“What’s nice about doing a show like this is I also love current events and news and politics and I get to have a combo platter of the two. A show like what I’m doing now is a dream come true,” Wilmore told Indiewire.

How comedy can make science better.

“I think the Universe is fundamentally hilarious, it’s just not typically taught that way,” Neil deGrasse Tyson shared, connecting to why he was moderating the panel. “That’s why I’m attracted to comedians, because comedians are the repository of the social cultural mores of our civilization. And they take it, absorb it, and they’re smart enough to figure out how to put it back to you to give you a new perspective on something you had previously taken for granted. Or something that might have made you uncomfortable and you’ll sit there and you’ll smile. And I say to myself ‘That potency, if I can fold that into science, oh my gosh!’ Science then mainstreams and becomes a part of pop culture, rather than an Oedipus around which you walk.”

READ MORE: Female TV Veterans Get Real About Creating Comedy and Not Waiting to Be Asked