Rick Alverson Challenges You to Watch 'Entertainment' His Way 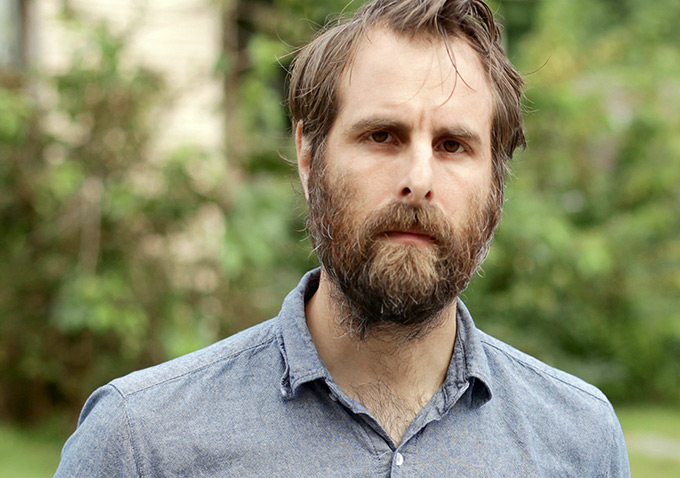 Rick Alverson’s “Entertainment” is a cinematic existential crisis. The film follows a failed stand-up comedian played by Gregg Turkington. On his way to meet his estranged daughter, he endures a string of dead-end shows in bars and clubs where his relationship with audiences borders on the abusive. The character at the center of “Entertainment” seems set on making audiences squirm, and so does the film itself. Taking the focus away from traditional expectations of a movie driven by narrative content and dialogue, Alverson instead focuses on form in order to create an experience that engages the audience on a physical level.

Alverson recently sat down with Indiewire to talk about his unusual origins as a filmmaker, the importance of putting form over content and using cynicism as a tool in creating a subversive film experience.

I watched the movie last night and it’s still very much in my brain, which is probably a good thing.

Yeah, I think so. Hopefully.
Part of me was hoping for a more redemptive ending  [laughs].

Oh really? We should talk about that.
I don’t know. I just felt like there was a lot of cynicism in the movie.
I would say cynicism is absolutely contended with in the movie. I have a lot of cynicism. A lot of my favorite authors are cynical, but it’s used to a certain end. It’s access to something. Cynicism is rampant, especially with overexposure to a lot of things. It’s interesting that you talked about a redemptive moment because I grew up with so many movies where the event of the film happened in the course of 90 minutes — the redemptive moment, the epiphany. I always felt like it deprived me of that experience. A lot of this movie is trying to move us back to content, back to form and then into our bodies. There’s a collaborative event that’s happening with the audience.

I think some degree the absence of resolution in the movie forces us to contend with that redemptive moment, or the lack thereof. And also it’s corollary to the lack of these filmic epiphanies in our everyday lives. I was so steeped on made-for-TV movies and sitcoms and “Magnum PI” growing up that I learned much of what I know about the world in those formative years from that medium. I had to re-learn the terms of the world, the arbitrary chaotic terms of the actual world. I felt like there was a bit of an injustice done. The expectation of epiphany, the idea of possibilities that don’t exist in the world. There’s an element of exploration of the world with cynicism and a kind of pessimism, but it’s also, I think, to a really constructive end. It seems more interesting to find out where things end than to believe that things never end. 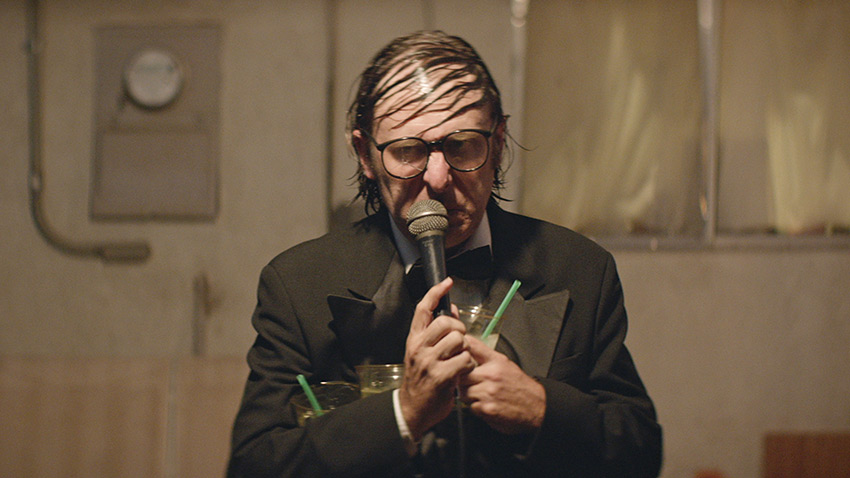 It’s interesting that you mention there’s a collaboration on the part of the viewer. The movie is a very engaging viewing experience from a physical perspective.
Oh, totally. I’m an audience member as much as anybody, and I haven’t been reared on certain engineered responses to a particular kind of narcotic end. I’m really sensitive to that as a viewer, and when you’re cutting a movie you’re a viewer as well as an engineer. One of the reasons why “A Women Under the Influence” is one of the most important movies to me is that there’s so much chaos in the thing. It breathes in a way that a lot of films don’t breathe; the tightness and efficiency of the exchanges is removed and there’s this messy, combustible and extemporaneous uncertainty about the relationship with these individuals in a way you don’t typically see with highly engineered studio films where everything is efficient, where everything is digestible.

I love when things fall apart. With this movie — I have in my other movies, too — but I’ve hopefully matured to a place where I recognize that there has to be some kind of structure to contain the dismantlement of the thing. This has a lot more formal consideration — it’s highly structured, highly blocked, highly contained. The way it becomes combustible or clumsy happens with our relationship with it, or certain elements of the dialogue, uncertainties of expectation.

On this movie you’re the writer, director, producer and editor, and on your earlier movies you were the cinematographer as well. Why is it important for you to be involved with all parts of production?
I don’t know. I guess the best answer is that I’m a bit of a control freak.
Out of the gate you were taking on all parts of that process. You’ve made four movies since your first film, “The Builder,” in 2010. What were you doing before that?
I was a carpenter and a cook, and I played in bands for a decade and a half. Predominantly I worked on carpentry crews and worked as a contractor for a bit and worked in restaurants and cooked.
Was there just some point when you decided you needed to make a film?

Yeah, it’s something I’ve wanted since I was a teenager. I briefly went to NYU for film, very briefly. I think I was turned off by the insurmountable mechanism of the whole thing — the ideas of the industry and financing and maybe the lack of total engagement with the thing. The amount of compromises that were necessary seemed like it wasn’t immediate enough for me. For 15 years or more I occupied myself with other things. Then frankly digital technology, the Sony EX1, had a latitude on it that was finally approaching film. That was a way in. I felt like I could buy some gear and make a movie on my own and experiment with the thing, just jump into it. I thought, “It’s a shame I never made that feature I wanted to make,” so I did.
It sounds like it maybe comes back to that idea of you needing to have authorship over the film. You waited until there was a way to do it all on your own.
In certain modes of the industry they would allocate you to a particular role, as opposed to being able to do a lot of things, and the freedom of doing that is what independent film offers. I think that inevitably you can’t explore the same way if I was just directing and working with someone else’s script and had producers and investors that insisted I was true to someone else’s vision, there isn’t the same elasticity. I’m constantly rewriting. In the edit I’m rewriting. And because I’m the writer and in some degree producer and director and co-editor, I can think and be way more malleable, which I think is essential.

That’s been the contribution of independent film, that it literally formally broke this mechanism of reproducing something that was set in stone and had certain economic justifications for the attempt to absolutely reproduce it, and there’s this dead experiential event between the imagining of the thing and its reproduction. It’s reproducing something rather than creating something that’s in response to environments and limitations. Independent film can do that because economically it changed the film. 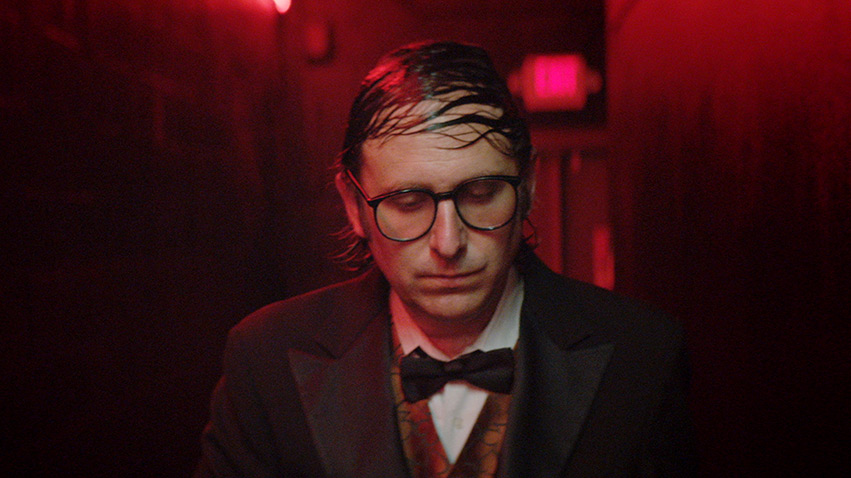 Gregg Turkington uses his Neil Hamburger stand-up comedy persona for the lead role. In terms of the casting, was that something you were aware of or was it something he brought to the table?
Neither one of us had an interest in a promotional vehicle for a comedic character. What he does is so evolved over 20 years and so particular. I went to a show and I saw an hour of his work, and I realized I think that a lot of his interest in repetition and restlessness and subversion of expectations and cadence and beats are similar to my interests dramatically. It seemed like an interesting experiment to borrow from that character and create something else entirely.
The idea of subverting expectations is there with his character in the film and also with the film itself.
Yeah, I’m still exploring it a little further in conversation with Gregg and hearing him talk about his life as a stand-up performer with that character. I realized that it’s so much about form, what he does. In a way, we’re a content-driven consumer society now. You read the majority of film reviews talking about predominantly, if not exclusively, the content of the film. They don’t mention the aspect ratio or the composition or these other formal elements. I think as moviegoers we’re taught to move straight through the form to the content and to read movies. I think that’s done over and over again. I don’t know very much at all about stand-up comedy, but to hear Gregg talk about it you see that there’s the construction of that identity, that character, the formal falseness and the artifice of the thing. What used to be an understood necessity of recognizing that formal interaction is sort of disappearing in the interest of keeping with moving through the film as efficiently as possible to the content.

With the majority of comedians these days it’s autobiographical. And this drives Gregg crazy and I can understand why because it’s not just deceptive, it’s insincere. There is a performance happening. That critical intelligence is lapsing from all of us because we’re not being engaged formally in the same way that we used to be. It was a staple of entertainment in the early 20th century and mid-20th century in America. I think with “Entertainment,” for me, it’s that dance between our instincts to be reading a film, to be exclusively looking for drivers of the narrative through the content when there’s this formal event happening to us physiologically. When we’re hearing things, seeing things, when we’re reacting to a formal event we’re sort of unaware of that. We think we’re reacting to a narrative event that’s content, when in fact we’re reacting to a formal event. It’s this cat-and-mouse game to bring the audience back into that space of the awareness of what they’re seeing.

“Entertainment” is available in theaters, on demand, and on Amazon Video and iTunes.

READ MORE: 7 Films That Get Serious About Stand-Up Comedy