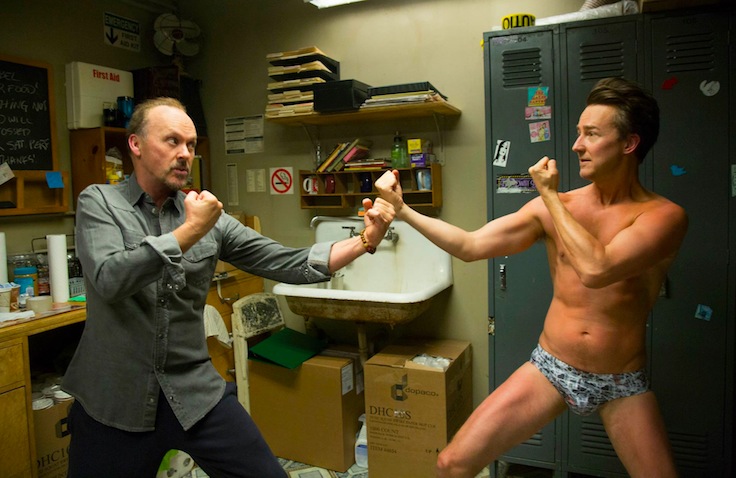 Open Road Films has their hands on one of this year’s most star-studded ensembles in Tom McCarthy’s “Spotlight.” The awards darling stars Michael Keaton, Mark Ruffalo, Rachel McAdams, Brian d’Arcy James, Liev Schreiber and John Slattery as the Boston Globe reporters and editors who investigated allegations of sexual abuse in the Catholic Church. Their efforts led to a Pulitzer Prize-winning report that uncovered a decades-long cover-up at the highest levels of Boston’s religious, legal and government establishment. With Stanley Tucci and Billy Crudup rounding out the cast as an ally and adversary the reporters get entangled with, “Spotlight” has an ensemble operating at the highest order. Miraculously, nobody outshines, steals or carries the weight of the picture on their backs alone. For a film about the rewards of teamwork, the “Spotlight” cast proves such a theme tenfold.

David O. Russell’s ferociously entertaining “American Hustle” centers around a group of con artists, so it’s only right that the five principle actors who make up its A-list cast continuously steal the movie from one another in ways both surprising and exhilarating. Just when Bradley Cooper’s hyper personality seems like a safe bet to run away with the movie, in comes a Christian Bale meltdown or Jennifer Lawrence seduction or Amy Adams fake-out that makes the film a constant chess game of unforgettable performances. Given Russell’s hot streak after “The Fighter” and “Silver Linings Playbook,” it probably wasn’t too hard for Annapurna Pictures to lock down such a dreamy cast, which also includes Jeremy Renner, Louis C.K., Michael Pena, Jack Huston and Robert De Niro. But even with Russell at the helm, the thought of so many of today’s best working actors all sharing the screen seemed too good to be true. If anything, “American Hustle” proves one should never doubt the ensemble wizardry of Russell.

The Coen Brothers have often cast unknowns and sent them into the star-making stratosphere, but they took the opposite approach for their 2008 comedy “Burn After Reading.” Starring Brad Pitt, George Clooney, Frances McDormand, John Malkovich, J.K. Simmons and Richard Jenkins, this pitch black comedy spins what we’ve come to expect from each actor on its head, resulting in a wacky, surprising and constantly entertaining tale of blackmail. Pitt and McDormand are loopier than ever as Linda Litzke and Chad Feldheimer, two gym employees who obtain a top secret CIA file and hold it for ransom so that Linda can have a life-changing cosmetic surgery. In typical Coen Brothers fashion, events quickly spiral out of control as these two doofuses find themselves in way over their hands. The amusing plot mixes with its extreme characters and shocking violence for an under-the-radar Coen Brothers gem. The Coens don’t often go the star-studded ensemble route, but here it works like gangbusters.

New Line Cinema and Paul Thomas Anderson are responsible for two of the most star-studded casts of the 20th century thanks to “Boogie Nights” and “Magnolia,” both of which find Anderson crafting sprawling ensembles in the vein of Robert Altman. “Boogie Nights” may not have been “star-studded” at the time, but looking back this deep dive into the 1970s porn scene is more or less a holy grail of the some of the best contemporary actors of all time: Mark Wahlberg, John C. Reilly, Julianne Moore, Philip Seymour Hoffman, Don Cheadle, Burt Reynolds, Alfred Molina, Willian H. Macy, Heather Graham, Thomas Jane, Nicole Ari Parker and more. “Magnolia” stars many of the same screw, including Moore, Molina, Macy, Hoffman, Guzman and Reilly, and adds major star power with Tom Cruise. While its ambitious Los Angeles-set storyline couldn’t be further than the groovy heights of “Boogie Nights,” it too seamlessly uses its ensemble to create a puzzle of lost souls, all trying to be their best selves but struggling in the fight for success and happiness.

With “I’m Not There,” Todd Haynes upends the conventions of the biopic genre by crafting a memorable ode not merely to Bob Dylan, but also to the legends that surround the man and form our disparate perceptions of him. Rather than making a singular portrait of a mercurial artist, Haynes cast six versatile actors in the role of Dylan, including Christian Bale, Heath Ledger, Richard Gere, Ben Whishaw, Marcus Carl Franklin and a standout Cate Blanchett. From a Greenwich Village folk singer to a born-again Christian, each of these different incarnations of Dylan presents a unique identity seemingly unmotivated by the others. Still, as fresh as the experiment of “I’m Not There” is, Haynes’ audacious film would not work nearly as well as it does without excellent performances from its kaleidoscopic cast. Adding further ensemble prestige is Julianne Moore, David Cross, Charlotte Gainsbourg, Michelle Williams, Bruce Greenwood and Kris Kristofferson.

Quentin Tarantino has often favored the star-studded ensemble, twisting the legacies of his actors so that the viewer can appreciate them in a new exhilarating light, but none of his features come as compact with headline-making stars as “Django Unchained,” which could more or less explain why it’s his highest grossing film of all time (so far, at least). Jamie Foxx heads up the cast as the titular Django, a freed slave who joins a bounty hunter (Christoph Waltz, an Oscar-winning star in his own right at this point, thanks to his work in Tarantino’s “Inglourious Basterds”) on a mission to save his enslaved wife (Kerry Washington at the peak of her “Scandal” rise to power) from a sadistic plantation owner (Leonardo DiCaprio). Django’s journey brings him into contact with a host of supporting stars, including Don Johnson, Jonah Hill, Walter Goggins, and, most memorably, Samuel L. Jackson as a viciously loyal house slave. As is true with every Tarantino picture, big names don’t overshadow his entertaining characters and instead fuel them to surprising heights.

Woody Allen and Sony Pictures Classics often put a big star at the center of the director’s picture, but rarely is the cast so thoroughly star-studded as it is in his 2011 Oscar winner “Midnight in Paris.” Following a struggling writer as he has fantastical midnight adventures with some of the greatest writers, painters and thinkers of the 20th century, “Midnight in Paris” finds Allen appropriately stacking his ensemble with the likes of Owen Wilson, Rachel McAdams, Michael Sheen, Kathy Bates, Marion Cotillard, Lea Seydoux, Adrian Brody, Tom Hiddleston, Alison Pill and Corey Stoll. With such a light and airy fantasy at the film’s center, the ensemble has an absolute joy ripping into their iconic roles, be it Stoll’s commanding Hemingway, Brody’s nonsensical Dali or Pill’s constantly frazzled Ella Fitzgerald. Heading it all up is Wilson, who gives an everyday likability to the shrill and neurotic Allen persona. “Paris” may not be the director’s best, but it’s an intelligent romp with a whipsmart cast.

Say what you will about Paul Haggis’ “Crash” (overwrought, simple-minded, self-indulgent) and its Best Picture victory over “Brokeback Mountain,” but there’s still no denying the strength of its packed ensemble cast: Sandra Bullock, Don Cheadle, Matt Dillon, Jennifer Esposito, Brendan Fraser, Terrence Howard, Ludacris, Thandie Newton, Michael Peña, Ryan Phillippe and Larenz Tate. Each actor holds his or her own in this ambitious story of all sorts of Los Angeles residents over the course of two days, from a black detective estranged from his mother to a white district attorney and his spoiled wife, a racist white police officer, a Persian-immigrant and a hard-working Hispanic locksmith, among others. Haggis bites off more than he can chew, reducing many storylines to an overtly thematic contribution to the overall story about race relations, but the cast succeeds in creating a diverse collage of attitudes and personalities. They take what read as stereotypes on paper and bring to life their human pulse.

Every year it seems there is at least one major indie release that has “the star-studded ensemble of the year,” and “Birdman” was certainly that film last year. Starring Michael Keaton as an actor suffering a major existential crisis while mounting a Broadway adaptation of a Raymond Carver novel, “Birdman” is bolstered by the effortless strengths of its supporting cast, from Emma Stone and Edward Norton’s Oscar nominated turns to the more subdued but equally important work from Amy Ryan, Naomi Watts, Andrea Riseborough and Zach Galifianakis. In the hands of this talented ensemble, Alejandro G. Iñárritu’s motormouth script and impassioned emotions run the gamut of comedy and drama. The director famously shot the film with DP Emmanuel Lubezski in a series of long takes, and the tenacity in which each performer sinks his or her teeth into these extended takes is as fearless as it is invigorating to behold.

Even if you forget about the remarkable supporting cast for just a minute (Miranda Richardson, John C. Reilly, Toni Collette, Margo Martindale, Ed Harris, Allison Janney, Jeff Daniels and Claire Danes), Stephen Daldry’s “The Hours” is still a star-studded feast thanks to the actress triumvirate at its center: Meryl Streep, Nicole Kidman and Julianne Moore. Getting three of the most acclaimed actresses in cinema into one picture is no easy feat, but such was the case with this Miramax award winner, which follows the interconnected stories of three women all affected by the Virginia Woolfe novel “Mrs. Dalloway.” Across three generations — 2001, 1951 and 1941 — Daldry and his sensitive leading ladies create a portrait of feminine strife, resolve and triumph. As the emotions of one woman reverberates through time to the next, the movie imparts a legacy into its thematic oeuvre that is emotionally striking. Guided by these three A-listers, “The Hours” is a emotional winner.

Robert Altman will forever be the master of the star-studded ensemble (see “Nashville,” “Network” and “The Player” for more proof), but none of his casts have popped off the page with so many glitzy names like “Short Cuts.” Inspired by nine Raymond Carver stories, Altman’s drama is an ambitious dissection of 22 different Los Angeles characters, all either loosely connected in the plot or spiritually connected by the film’s themes of chance, luck, tragedy and infidelity. With Matthew Modine, Julianne Moore, Fred Ward, Anne Archer, Jennifer Jason Leigh, Robert Downey, Jr., Madeleine Stowe, Chris Penn, Jack Lemmon, Frances McDormand, Lori Singer, Andie MacDowell, Buck Henry and Lily Tomlin all in rotation, “Short Cuts” never misses a beat or finds a moment of downtime in its involving 188 minute runtime. Not every director can handle a cast as stacked or as glamorous as this one, but, then again, not every director is Robert Altman.

Wes Anderon and his troupe of committed actors have become quite the star-studded team, and none of his films have been as jam-packed with stars left and right like “The Grand Budapest Hotel.” The roll call for this exuberant confection ranges from Ralph Fiennes and F. Murray Abraham to Mathieu Amalric, Adrien Brody, Willem Dafoe, Jeff Goldblum, Harvey Keitel, Jude Law, Bill Murray, Edward Norton, Saoirse Ronan, Jason Schwartzman, Léa Seydoux, Tilda Swinton, Tom Wilkinson and Owen Wilson. While Fiennes finds a delightful comic manner in the lead, the rest of the cast only get a couple minutes or so to make a lasting impression with their idiosyncratic characters, and it’s easy to see why each succeeds whole-heartedly. For a movie with a relentlessly infectious energy, the star-studded cast goes to great lengths to make this movie nothing short of enjoyable at every second.

This Article is related to: Features and tagged American Hustle, Birdman, Burn After Reading, Crash, I'm Not There, Inglourious Basterds, Lists, Magnolia, Midnight In Paris, Spotlight, The Grand Budapest Hotel