Into 'The Expanse': Great Sci-Fi Doesn't Require A Good Hat, But It Helps 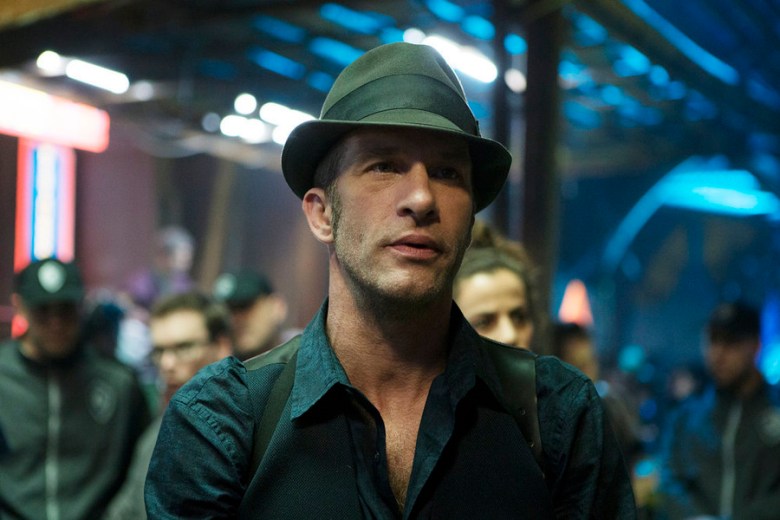 As of last night, “The Expanse” has officially premiered on Syfy, meaning that fans of the books written by James S.A. Corey and newcomers alike have the opportunity to discover this dense new world of political intrigue and hard sci-fi.

In earlier installments of Indiewire’s interview with “Expanse” executive producers Mark Fergus, Hawk Ostby and Naren Shankar, conducted at the TCA 2015 Summer Press Tour (see below), we talked about the technology. We talked about their influences. This week, to wrap things up, we get into the really important stuff: the hat. Specifically, the hat worn by Detective Miller (Thomas Jane), offset by a very distinctive haircut that sets him apart as a character — as it turns out, by design.

PART ONE: What Syfy’s New Sci-Fi Gamble Learned From ‘True Detective’
PART TWO: What It Means to Be Human, and Why ‘Sci-Fi Ended With Ridley Scott’
PART THREE: How ‘Game of Thrones’ Guided The Making of ‘”Chinatown” in Space’

Fergus, Ostby and Shankar also reveal the advantages that come with having the authors of the books in their writers’ room, as well as why a great actor could change all their plans for a minor character.

But first, the hat.

Miller’s got a good hat and a good haircut.

SHANKAR: Nice. I’m glad. I’m glad you like the hair.

I love the haircut, just because it’s so distinctively weird.

OSTBY: It is? My son got a haircut like that. His head shaved on one side.

SHANKAR: You have no idea how pleased it makes me to hear you say that, for things I cannot go into on the record.

OSTBY: The hat was quite a big debate. He does wear the hat in the book.

SHANKAR: But Terry McDonough, the director, hated the hat. He wanted the hat gone. He almost went to the head of the studio to say, “The hat’s gotta go.”

SHANKAR: He felt it went over the top. But Mark wrote a line — the ridiculous hat line. We made it a thing. What it became was Miller’s way of identifying himself against Belters and with the Earth power structure. That was sort of what it was, underneath that story. It becomes the way to take his identity away and poke at it.

SHANKAR: We’ll have the first joke, so we’re right up front about it. And the fun thing about it is you get an explanation for the hat in Episode 8. There’s an actual reason.

FERGUS: In the time we spent on hair and hats on this show, we could have had a whole new show. Julie Mao’s hair. The hat. Miller’s haircut.

SHANKAR: We had several different choices in hat. We laid them out. Which color. Which size. How big the brim is. Does it have a feather? Doesn’t it have a feather? Is it a fedora? Is it this? They’re all laid out, then you select one. And the one that was approved, Tom then picked a different one. He was like, “I don’t like this one.”

Thomas Jane knows what kind of hat his head needs.

FERGUS: We saw him when he was doing his little screen tests, walking around with the hat, and we thought, “Ah, this is going to work.”

I really hope this is the most you’ve ever explained about the hat to the press. I hope I have the exclusive.

FERGUS: Yeah, this is the most we’ve spoken of the hat outside the circle of trust.

SHANKAR: If you go to Comic-Con, it will have its own panel.

OSTBY: I can see the hat taking questions.

SHANKAR: I’ll tell you a funny story. So after I met Mark and Hawk and met Sharon and they brought me on the show, Sharon Hall goes, “The book authors [Daniel Abraham and Ty Franck] are going to be in your writing staff,” and I was like, “Oh, what?” I’m like, “Are you sure that’s a good idea?” Because I had no idea what to expect, but when we started on it was just me, Mark, Hawk, Ty and Daniel basically in a small room just basically talking about how this show is going to go, and very quickly it became obvious that the guys weren’t going to be precious about things. They really understood that the medium had different demands, and they were so open to it.

And it’s become really awesome because what’ll happen is we’ll be talking, “Oh, it’d be great if in this storyline if we could get a real slice of Belter culture.” And they go, “What about this thing that we have in book 18?” Or whatever the fuck it is. It’s way down the line. And suddenly you bring in this little slice of life that they pulled further on. It’s been a really good collaboration that way.

OSTBY: If there’s something in the story, they can take it all the way back, or take backstory and take it all the way forward. But the first time we talked, they said, “Look, we know these are our books and we’re moving into a different medium now.  This is TV, things are going to change, and we fully understand that. We’re here to be a resource.” And we were like, “Yes.”

SHANKAR: I personally have always detested… The process, a lot of times, with adaptation is that they immediately throw away the unique aspects of the material that you’re trying to adapt. And I think that we’ve all been very aware of doing truly a faithful adaptation of the material because we are doing things in a slightly different order. Certain chronologies have changed. Certain character elements have been combined or pulled forward from things or pulled out of the novellas and brought into the world. But in reality, it’s really a faithful adaptation of the material.

I saw it at Comic-Con with a friend who’d read the books — very recently, I think, so they were fresh in his mind — and when you’ve got the book fan saying it’s super faithful…

OSTBY: That would be terrible if the book fans go, “This isn’t–“

For one thing, it no longer takes place in space. You’ve solved that space problem. [Note: This is a callback to the beginning of this interview.]

FERGUS: We took some minor characters that were small on the page and then you end up getting a really good actor and you’re like, “Fuck it.”

SHANKAR: He’s somewhat of a minor character in the book. And when we started getting into it, it became a way to bring a lot of themes out. It became a really interesting character and then we got Jared Harris [“Mad Men,” “Sherlock Holmes”] on board and he’s fantastic. We all want to do “The Anderson Dawes Show.”

You joke about a spinoff, but I feel like in comics while there are long ongoing arcs, then you have the one-off stories, which doesn’t happen nearly enough in TV. Well, “Battlestar Galactica” had the standalone movies…

SHANKAR: Right, they’re sort of off the pure track of the show for me. I mean, I love [“Battlestar”]. I think it’s a terrific, terrific show. But I didn’t really get into the movies that much. I think what we’ve done and what we continue to do is expand the language of this as we go. The [“Expanse”] novellas are really, really interesting entry points into the show, and you can do more and more with that. Hopefully, with success, we’ll get a few seasons in and then you do an entire episode off the main characters, that just dives into one of these stories.

The joke I like to make is “The Wire” Season 2, with the docks.

FERGUS: We don’t want to go that crazy.

SHANKAR: We are kind of doing that, though. There’s a little of that in it.

SHANKAR: No, actually I’m talking about into Season 2. What’s the big overarching, organizing principle of “The Wire”? The destruction of a city. Like a complete collapse of an urban thing. We shift focus and emphasis. We bring in new storylines and perspectives that we follow and track across Season 2 that just didn’t exist in Season 1, and we’re doing it because we’re trying to dimensionalize the conflict in very different sides.

I’m curious. You talk about seeing the conflict in all these different angles. Do you feel like audiences are going to come in thinking that one side is more right than the other side? And do you want them to?

FERGUS: We’re really balanced. Every villain thinks they’re the hero. Every perspective thinks that theirs is valid.

SHANKAR: There are no bad guys.

FERGUS: The bad guys who are the bad guys have an absolutely unassailable perspective on why they’re doing what they’re doing and it makes total sense. And it’s actually visionary, but it also borders on inhuman. Everyone is smart. Everyone has a point of view.

OSTBY: You’re gonna root for the underdog, though.

FERGUS: When you see a hero who’s a bit of a fuck up but trying to be a better person, you just kind of throw your lot in with those struggling characters.

OSTBY: And you want that. You always want somebody oppressed to rise up.

SHANKAR: He’s longing to be a better person.

FERGUS: People like that– Our whole career is based on that one character. The fucked up middle-aged guy trying to be better.

That’s the basis of most great television, at this point.

FERGUS: I think it’s something we can relate to, people trying to be better people. We hate stock villains and people that are clearly bad and clearly good. I think we really did a good job of making everyone the hero of their own story.

“The Expanse” airs Tuesday nights at 10pm on Syfy.