The classic holiday treats starring Rudolph, Frosty and Santa Claus, created by Arthur Rankin, Jr. and Jules Bass, are way more disturbing than you might remember. 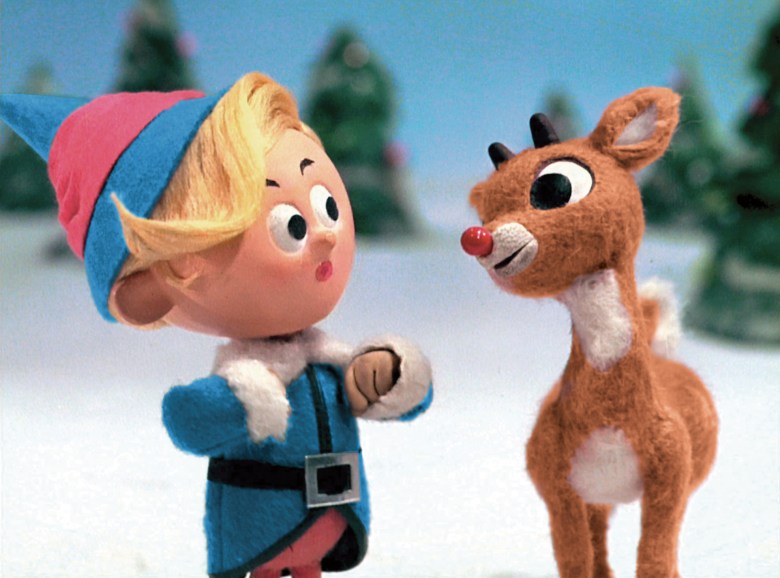 With December rearing its giant festive head once again, there is one thing that TV audiences can count on, and that’s the endless running and re-running of Rankin-Bass stop-motion Christmas specials. Starting with “Rudolph the Red-nosed Reindeer” in 1964 and continuing into the late ’80s, Rankin-Bass produced a solid list of now-classics that, while festive, are also confusing, disturbing and, at times, deeply upsetting. Indiewire gathered up nine of Rankin-Bass’s most memorable Christmas classics and put them on a scale ranging from appropriately festive to absolutely, unquestionably effed up.

You can’t get any more appropriately festive than “Rudolph the Red-Nosed Reindeer.” The first Rankin-Bass special is still the purest representation of the holiday spirit there is. Elves make toys, Santa gives the toys to children, reindeer fly — everything makes (relative) sense here.

Festive Moment: While it’s nigh-on impossible to choose just one, the climactic sleigh ride on Christmas Eve still fills even the most bitter hearts with holiday cheer.

What the F*ck Moment: While some might be unsettled by Yukon Cornelius’ near madness for gold, the most disturbing part of “Rudolph” is that we see an entire society of adorable elves and reindeer brutally mock a child for his birth defect. The worst part — Santa joins in.

Holiday Aura Produced: A yule log wrapped in peppermint bark, garnished with a sprig of mistletoe. 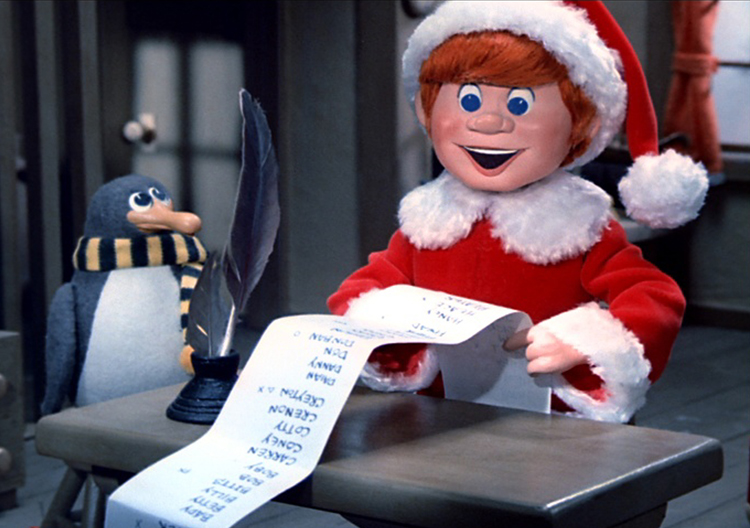 “Santa Claus is Comin’ to Town’ is your standard non-denominational origin story. A family of elves, fondness for children, deep and abiding love for wooden toys — this is pretty festive stuff. However, the film does mark the beginning of two strange Rankin-Bass traditions: Villainization of Europeans (the oppressively Teutonic Burgermeister Meisterburger) and a bizarre obsession with occult magic, manifest here in the very creatively named Winter Warlock.

Festive Moment: Kris Kringle sings and gives toys to children (yes, the children are required to kiss him afterward, but 1970 was a different time…we think. In retrospect, this is also f*cked up).

What the F*ck Moment: The soon-to-be Mrs. Claus has a sexual awakening when Santa gives her a doll. She then lets down her hair and takes us all on a psychedelic trip through her jacked-up imagination.

Holiday Aura Produced: Sitting by the fire and opening presents while not being able to really move past Woodstock. 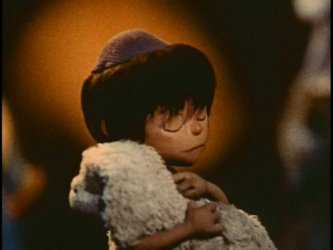 Like a group of enraged Bible Belters protesting disposable coffee cups, Rankin-Bass would like us to remember that Christmas is a Christian holiday. Thus, a Biblically-inspired stop-motion film. While it does not ooze the red-and-green pine-scented holiday cheer of other specials, I suppose “Little Drummer Boy” gets appropriate points for actually having to do with Jesus. One could argue that this continues the Rankin-Bass obsession with magic spirits and wizards, but we are not getting into that right now.

Festive Moment: Having a child play the drums for you would suck as a Christmas gift today, but I’m sure in Ancient Babylonia it was pretty sick.

What the F*ck Moment: Our protagonist is a self-proclaimed nihilist who had his parents murdered before his very eyes. Happy Holidays!

Festive Aura Produced: A confidently arranged nativity scene on your neighbor’s front lawn. It reminds you that you are living in America. 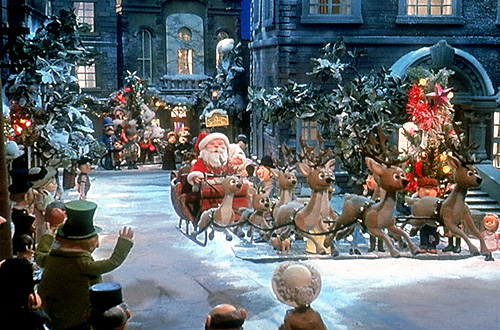 6) “The Year Without a Santa Claus”

Santa’s elves travel to what is essentially California to see whether or not people still believe in Santa Claus. This is comfortably festive. While Jolly Old Saint Nick and his companions are featured quite heavily, Rankin-Bass still manages to sneak in a good helping of non-specific pagan deities. Who exactly are Heat Miser and Snow Miser? What arcane power have they been granted and by what ancient evil? What strange druidic cult is Mother Nature the principal deity of, and how are she and Mrs. Claus so chummy?

Festive Moment: As a youngster growing up in Southern California, it was nice to see Santa ride his sleigh somewhere other than the North Pole and remind me that, yes, Santa loves me, even if I am slightly terrified of snow.

What the F*ck Moment: Everyone somehow mistakes a reindeer for a dog. This is the most accurate representation of Californians ever to be on television.

Holiday Aura Produced: A palm tree wrapped in Christmas lights. A pentagram is carved at the base, where very few people will notice it. 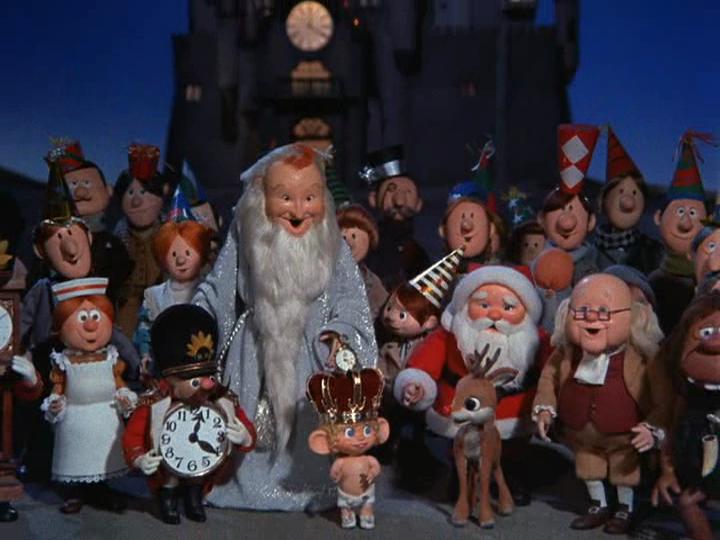 Yes, I know this is not technically a Christmas special, but having Rudolph save the day is at least a little festive no matter what time of year it is. In this doozy, Rudolph has to save Baby New Year when, like a certain someone we know, he runs away after being mocked for his birth defect. Unlike Rudolph, Baby New Year’s nose is perfectly dull. Rather, he has unnaturally large ears. What makes this special particularly disturbing is that it ends with Rudolph telling Baby New Year that he shouldn’t get mad at people for laughing at him, but instead, he should be thanking them for their cruelty. What someone should have told this kid is that they have surgery for that now. Hide your shame, Baby New Year.

Festive Moment: At the film’s close, Rudolph blows the fourth wall to smithereens and stares right at us as he wishes us a “shiny new year.” Whatever that’s supposed to mean.

What the F*ck Moment: An enormous baby-eating vulture. Also Ben Franklin. We can’t make this stuff up, folks. 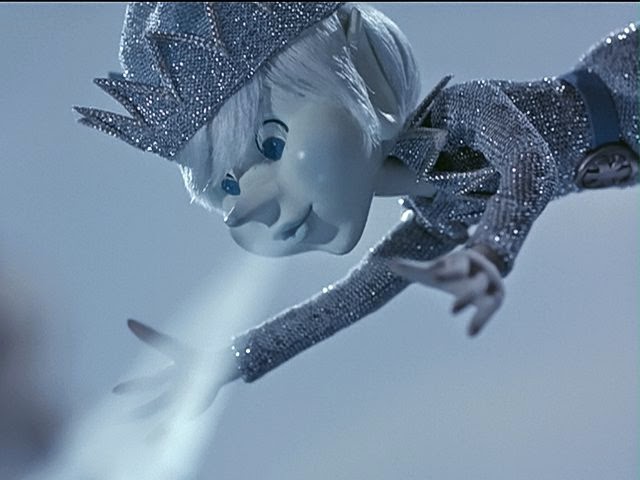 Nearing the absolute maximum threshold for strange, vaguely European mythical spirits and the dark magic they wield, “Jack Frost” is certainly more screwed up than it is festive. Jack, who controls all things chilly, lives inside a cloud with so many different types of pixie and elf that there isn’t enough room here to name them. To make matters even weirder, Father Winter (who may or may not have fathered Heat Miser and Snow Miser — fan theory pending) tells Jack that if he manages to collect a laundry list of material possessions and also make it in the sack with stop-motion Farrah Fawcett by the time spring rolls around, he’ll turn human and escape the eternal misery of having to make winter happen.

Festive Moment: The impoverished residents of a European village are too poor to afford gifts for one another, so they give each other imaginary presents and force themselves to act excited. This is absolutely more depressing than it is festive, but there’s not a lot to work with here.

What the F*ck Moment: The primary villain is a crude Russian stereotype. He is also a gifted genius of mechanical engineering. He is eventually killed by the film’s “hero.”

Holiday Aura Produced: Trying desperately to sing a Christmas carol, but the howling winter winds drown you out. 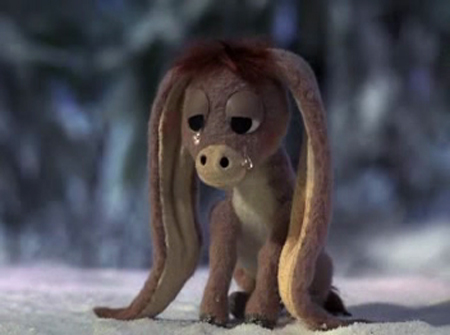 As someone who has never read the Gospels, I can’t say for certain that the Virgin Mary was never protected from the harsh desert sands of Babylon by the physical handicap of a juvenile donkey, but something about this Rankin-Bass special feels made up. Nestor is a donkey. Nestor has long ears. These long ears are perfect for shielding Mary’s distended uterus from inclement weather. I would love to hear what the Pope has to say about all this.

Holiday Aura Produced: Exactly one year after receiving a puppy for Christmas, your parents explain to you what euthanasia is. 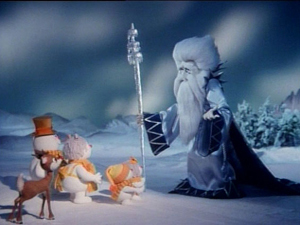 Where to start, where to start… Well, there is yet another evil snow-themed warlock — this time named Winterbolt. A beautiful light goddess provides children with the sobering message that “All things must come to an end” before literally dying. Rudolph has an evil twin that frames him for embezzlement. Winterbolt has a gun thrown (not fired) at him by Ethel Merman and turns into a tree. Oh yeah, and Frosty the Snowman’s family melts. Even the children.

Festive Moment: I suppose “Rockin’ Around the Christmas Tree” is an appropriately festive song.

What the F*ck Moment: Did I forget to mention that Frosty, his wife and their two beautiful children die?!

Holiday Aura Produced: A child weeping into their hot cocoa after being hit in the face with a snowball. The snowball had a rock in it. 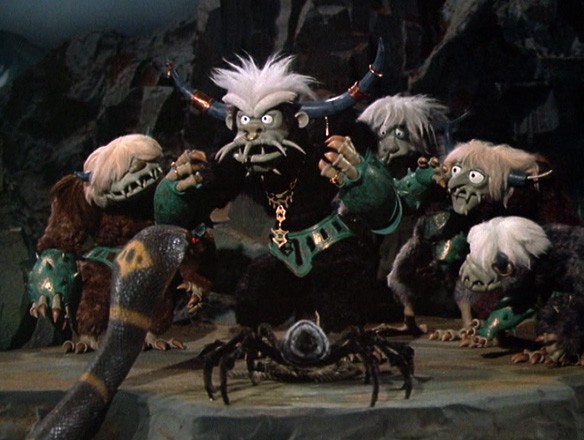 1) “The Life and Adventures of Santa Claus”

This is far and away the most screwed up Rankin-Bass special. The story’s framing device is that a council of omnipotent spirit-lords must debate whether or not they should make Santa immortal as he waits on his deathbed. What follows is the most divergent Santa Claus origin story in recent memory. Apparently, good old Saint Nick was raised by a magical lion in the enchanted forest that lies beyond this earthly realm. Apparently Santa had to fight a race of children-hating demons before he could get the whole Christmas thing started.

I imagine the pitch meeting for “Life and Adventures” went a little something like this:
“Hey, Rankin?”
“Yes, Bass?”
“How do we spice up the story of Santa Claus for today’s young audience?”
“I’m not sure…what if we have Santa fight a war against invisible eldritch horrors over the right to give toys to other people’s children?”
“Sounds great. I’ll grab the puppets.”

Festive Moment: I am at a total loss. There is nothing festive about this. Your uncle talking about his colonoscopy over Christmas dinner is more festive than this.

What the F*ck Moment: Santa is kidnapped and tortured by a race of invisible demons. The king of these demons is later vaporized by a magical ax. Children have nightmares about this well into their forties.

Holiday Aura Produced: This holiday special creates a feeling akin to what it would be like to actually live at the North Pole with nothing but reindeer and elves to keep you company — terrifying, disorienting, but somehow alluring.

All the Christmas craziness of Rankin-Bass can be seen on ABC’s “25 Days of Christmas,” as well as through Amazon Video, Google Play and iTunes.

READ MORE: The 20 Best Christmas Movies Of All Time

This Article is related to: Television and tagged Christmas, Features