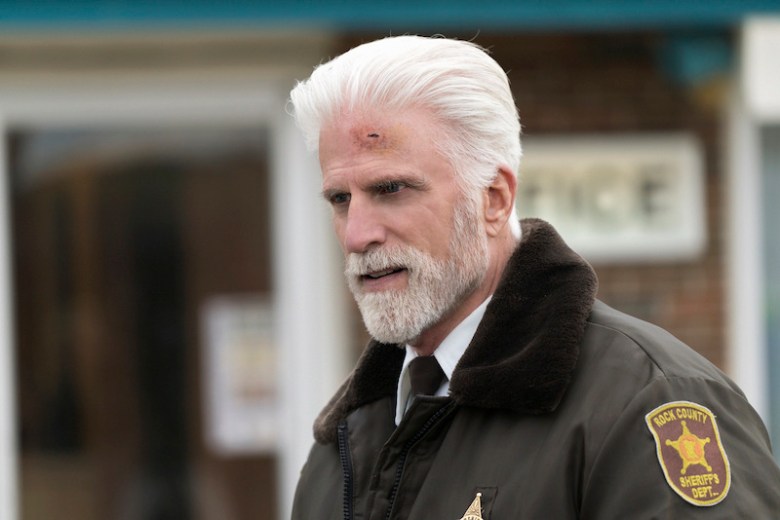 Um…aliens? In case anyone was still taking the opening statement of “Fargo” literally, the UFO sighting near the end of “The Castle” should persuade people to take the happenings of this series with a grain of salt. Sure, we’ve encountered plenty of otherworldly elements so far in Season 2, most notably when Rye Gerhardt (Kieran Culkin) looked to the sky after shooting three people in the Waffle Hut — a decision that cost him his life. But the motif had been just that until Episode 9: a distinct feature of the show, not an involved element of it. Rye could have been hallucinating, on drugs or, even if he actually saw a UFO, it was just a means to an end (i.e., the Blomquists’ involvement in this story).

Now everything has changed. Multiple people saw the giant spacecraft fly above the Motor Motel, including our level-headed protagonist Lou Solverson (Patrick Wilson). Peggy (Kirsten Dunst) and Ed (Jesse Plemons) saw it, too, as did Bear (Angus Sampson) and a number of others. What’s interesting about the sighting is that it seemed to help the largely innocent members of the shootout. It saved Lou’s life, as he was about to suffocate before Bear got distracted, and it helped distract Ohanzee (Zahn McClarnon) so Ed and Peggy could get away. One could make the argument it had helped both Lou and Peggy before — even if both times Peggy didn’t notice or remained unimpressed. Without the spaceship circling above the Waffle Hut, Rye Gerhardt might have escaped. While that would mean Peggy and Ed were safer, she may not have “fully actualized” into a woman who can stab a man in the back, plot to kill a cop and knock a guy out with a shotgun (let alone taze a man nearly to death). Lou, meanwhile, wouldn’t have had much of a lead on who killed who at the Waffle Hut without the car crash, but I digress.

What’s on everyone’s mind isn’t the funny connections but why they exist in the first place. Why are there UFOs in “Fargo?” Some theories have pointed to past Coen brothers’ pictures, namely “The Man Who Wasn’t There,” which stars Billy Bob Thornton and features a few similar scenes with flying saucers. But I think the real key lies in the “War of the Worlds” radio broadcast quoted at the end of “Before the Law” (Episode 2): “No one would have believed, in the last years of the 19th century, that human affairs were being watched from the timeless world of space. […] Few men even considered the possibility of life on other planets. And yet, across the gulf of space, minds immeasurably superior to ours regarded this Earth with envious eyes, and slowly, and surely, they drew their plans against us.”

Using aliens as a metaphor for a foreign threat isn’t much of a stretch, even if putting them in the context of “Fargo” is just that. The idea of an all-knowing force from above looking down in judgement already exists in this world and every other, only instead of the eye of God looking down at “Fargo” now, it’s aliens. Hawley & Co. needed a powerful entity to play the part, but also one that represented the paranoia of the post-Vietnam era. God is too good, and aliens fit the bill. If we imagine the world created by the good people of Luverne, Minnesota as a paradise — an Eden, perhaps, or at least a place to be envious of — and then reflect on how many times Lou Solverson has been dumbfounded, infuriated and deeply saddened by the attack on his perfect, personal world from threats apparent (local gangsters), foreign (encroaching gangsters) and utterly unknown (cancer), throwing a UFO into the mix is as mundane as Peggy makes it out to be. Others may stare in awe at the mysterious monstrosity, but Lou takes care of what he can — killing his enemy and protecting his own. What’s one more mystery in a world full of ’em?

The Lorne Malvo Award for MVC (Most Valuable Character) 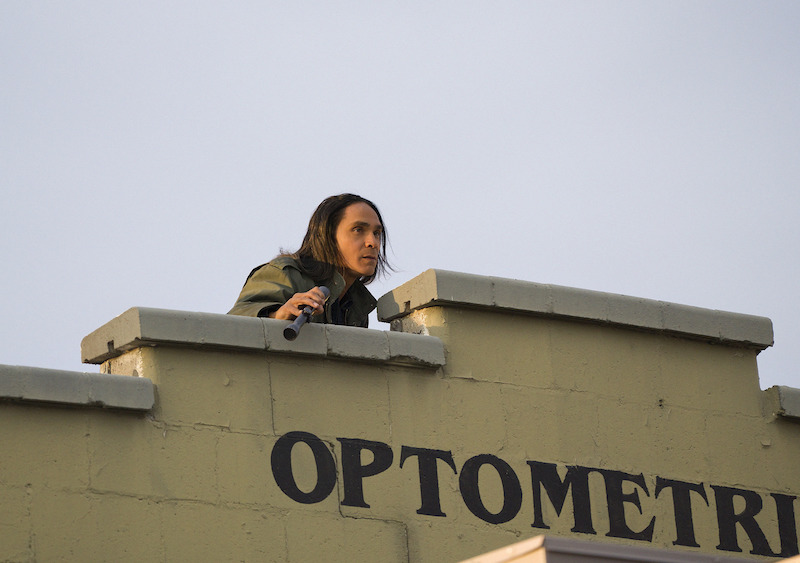 A few weeks back, we discussed the good and bad of Ohanzee’s character (played to efficient perfection by Zahn McClarnon), with our only real slight being that we don’t fully understand his motivations. Then last week we got a whopping dose of the indigenous hitman — so much, we wanted more. And what do you know, this week we got just that. Tackling our questions about why Ohanzee would sit down, neck exposed, to a scissor-wielding madwoman and when exactly he decided to turn on his employers, writers Noah Hawley and Steve Blackman pushed the queries back in our direction, pleading ignorance via a less than omniscient narrator.

On the one hand, it’s stimulating to see someone like Ohanzee — who would’ve previously been just a stock silent killer type — get so much time to develop. McClarnon is clearly up for the challenge, and his character is proving to be the lynchpin pulled from the grenade that is the Sioux Falls Massacre. Yet there’s something about the mystery involved in his examination that creates a foggy mystique in front of Ohanzee, as if he’s too foreign to be fully understood. This begs the question: Is the decision to not speak for a Native American character respectful to a point of view undoubtedly foreign to any white man, or is it perpetuating the myth of the other and dehumanizing a character even as we work to understand him better? I’m leaning more toward the former, but I think it’s a question worth keeping in mind for next week.

The Allison Tolman Award for MVP (Most Valuable Performer) 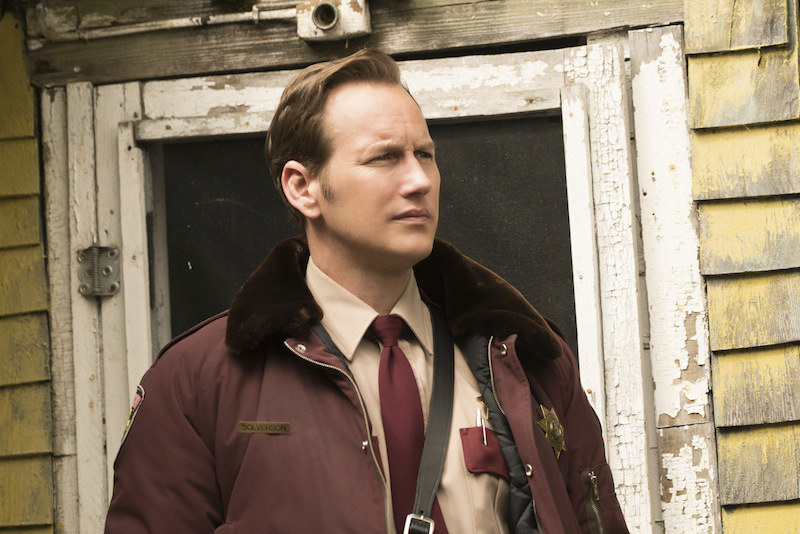 There are a number of performers who deserve props for Episode 9, starting with McClarnon and running through Jean Smart (who we are oh-so-sad to see go), but with only one week left I’ve got to give some credit to Patrick Wilson. Perhaps somewhat overlooked for his work as Lou Solverson, because he so very much looks the part of a strait-laced, wholesome, Midwestern gentleman, Wilson had ably embodied a veteran of war and pre-Vietnam life who’s coping with a world suddenly unfair to his notion that good breeds more good. I think he’s in for a doozy of a scene next week, when he either visits his dying wife at the hospital or informs Betsey of her father’s death, but his final discussion with Ted Danson was expertly minimalist. He expressed just enough emotion to convey his grief, just enough to show hope and just enough to tell Hank of what he knew he needed to do next. So let’s drink one for the hero of our story, and not forget about him again. 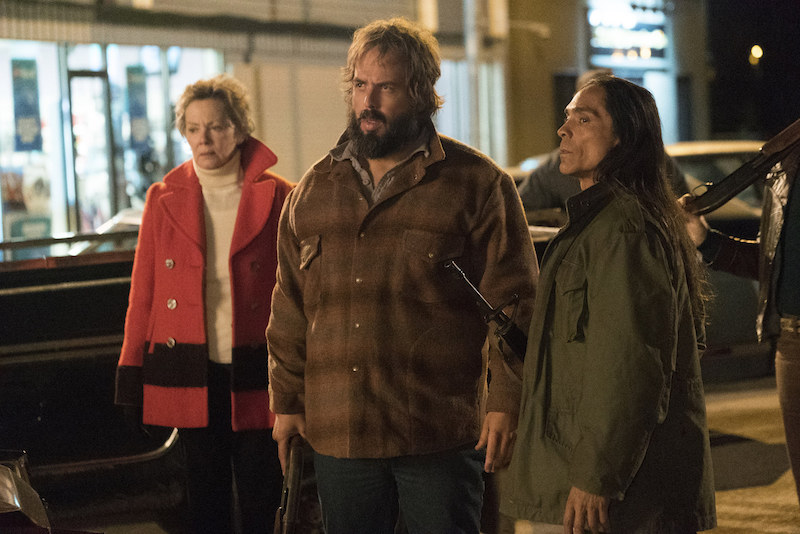 Oh Floyd, we barely knew thee. As soon as you decided to accompany Bear on his quest to get back Dodd, we knew you were a goner. (The same goes for Hank, with the trigger being his refusal to return home with Lou.) While it was the right idea to get the job done yourself, rather than trusting your impulsive sons, the fourth job was three too late. What makes her death all the worse is how it happened and what it signifies. Addressing the former point first, Ohanzee didn’t want Floyd to come down. She could have been spared the blade had she never found out he’d lied to her about Milligan’s men being there. Yet her demise signifies an end to the war between the Gerhardts and Kansas City mafia. Three sons are dead. Both parents, too. Maybe Simone (Rachel Keller) is still alive, but she doesn’t have much power, even if she made it out of those woods. With Ohanzee switching sides, there’s no one left to stop a takeover by big business, which means bad news for Lou and everyone up north. 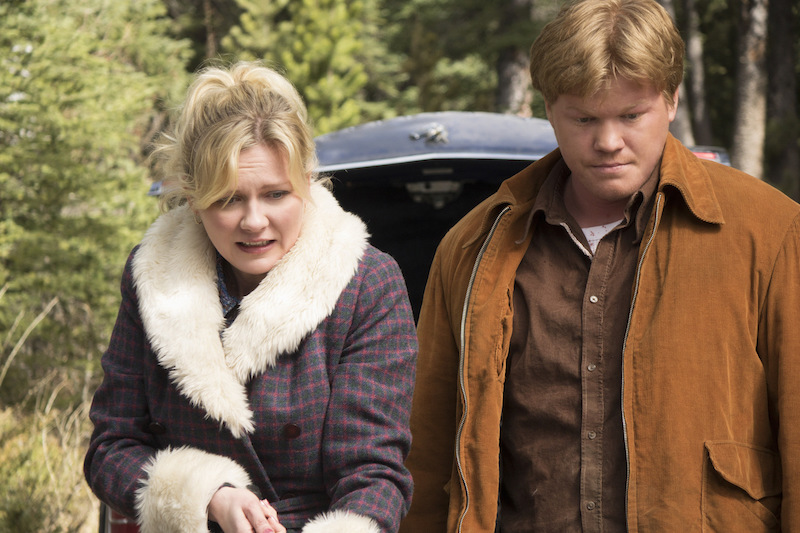 There wasn’t much joy to be found in Episode 9, but I did manage to relish a few more classic Peggy moments in a season stacked with them. First, she decided to flirt with Detective Benjamin Schmidt (Keir O’Donnell), a successful coup to set him at ease — so at ease, in fact, he fell asleep guarding the prisoners. Peggy suggested taking him out then, but Ed wasn’t having it, so she waited until he turned his back one second too long and popped him in the head with a shotgun. Very good, Peggy. You really are becoming your full self.

The second scene was brief and spontaneous, but it still said plenty about Mrs. Blomquist. When fleeing the motel, Ed got sucked into admiring the UFO above, but Peggy — all business — grabbed him and steered him to safety with a matter-of-fact, “It’s just a flying saucer, Ed.” Nothing is stopping Peggy on her quest — not mob men, not cops, not even aliens. She’s determined and for that, you gotta love her just a bit, eh?

Quote of the Night

Now, it’s common practice for some critics to watch a few episodes ahead or even full seasons of a show before writing episode reviews. For the good ones out there, it helps them steer the conversation, but a few too many bad eggs use it to make themselves sound smarter than your average (or above average) TV viewer. You’ll have to take my word and that of the Indiewire brand that that’s not something we do here, despite my musings last week on the fate of Hank and lack of “collateral damage” in general in “Fargo” Season 2. As has been well-documented, I’ve been worried about Hank’s fate for a long time now, and accurately predicting who his killer ended up being gives me no solace whatsoever. Hank is a character I very much wanted to see make it through, and — barring some miraculous twist — I’m quite morose now knowing he won’t be making that dinner.

Nor, though, may Betsey Solverson, who was found passed out on the kitchen floor by little Molly and then undoubtedly rushed to the hospital where she can hopefully receive some life-extending care. If Lou wasn’t so darn wholesome (and we hadn’t seen his future in Season 1), I’d be worried for his sanity after coming home with a dead friend and father-in-law already weighing him down, only to find out his wife has passed, as well. Combine that with the rest of the world going to hell in a handbasket, and Lou may not have any answers for his daughter when she starts asking, “Why?” Luckily, we know those two make it out okay, so seeing how he puts their lives back together — starting next week — is the biggest tease of them all.