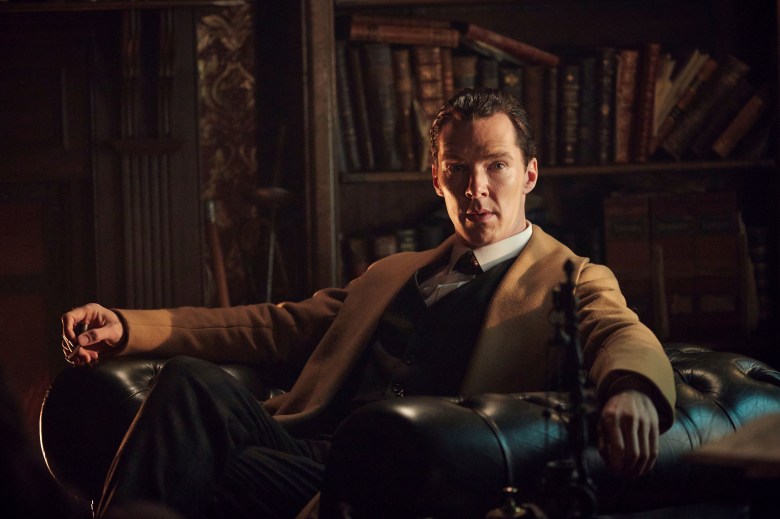 Six years ago, British television hadn’t made much of a dent in America, but six years ago Steven Moffat hadn’t yet become the showrunner for two of the biggest crossover franchises in international television.

READ MORE: Exclusive: ‘Doctor Who’ Meets American Tourism in ‘The Tribunal of Minos’

In 2010, Moffat and co-creator Mark Gatiss launched “Sherlock,” a modern take on Sherlock Holmes. He also inherited the awesome responsibility of running “Doctor Who” — one of Britain’s most famous and long-running series of all time — from producer Russell T. Davies. In the ensuing years, his shows have launched major stars while finding a foothold in America unlike anything we’ve seen before.

And he couldn’t do it without “Sherlock” producer Sue Vertue, whose other credits include “Coupling” and “Mr. Bean.” In Masterpiece executive producer Rebecca Eaton’s words (during last summer’s TCA Press Tour), Vertue “keeps the show on the road and wrangles all the boys.” Which is not so easy, when two of the boys — Martin Freeman and Benedict Cumberbatch — have become very much in demand.

Indiewire got the chance to sit down with both Moffat and Vertue (who share the kind of natural chemistry you’d expect from a long-married couple) while they were promoting both “Sherlock” and “Doctor Who” at the TCAs. Below, they reveal the secret to rediscovering the energy of a first season (called “series” in the UK) and admit that their focus is on making “Sherlock” work “in exactly one language.”

The two big shows we’re talking about are both shows that could easily be repetitive and stick to a certain status quo, but instead, they don’t. Is that a conscious decision you make?

MOFFAT: It’s a weird thing that happens with all television — you get better at making it. You get more expert and it gets slicker and glossier and duller, and you somehow lose something from Series 1’s rawness. Series 1 — where you don’t quite know what you’re doing — there’s an energy to that. But if you keep making things different for no reason other than the sheer hell of it, you get the Series 1 energy back. You’re trying to find it, as opposed to just being slick at it. “Sherlock” is now five years old and you’ve really got to work at that.

Is there specific stuff that you wish you could go back and bring back into “Sherlock?”

MOFFAT: Not especially. Temperamentally, I like to know what the new thing we’re going to do is.

VERTUE: In terms of the text, which started off in Series 1, we have to keep evolving it because everyone is doing it as well. We now have to try and stay one step ahead.

You guys are pretty innovative in that. Where did it originally come from?

MOFFAT: The very first episode we made for real was “The Great Game,” which was the last one of the first series. In that, Mark had written a lot of texting, people just picking up phones and looking at texts. And [director Paul McGuigan] hates doing shots of phones. He says it’s boring. You’ve got to hold it there forever, and people don’t really do that.

VERTUE: It wasn’t his style really.

MOFFAT: He said, “I’m just going to put the text as lettering on the screen.” I thought that sounded awful. I kept that thought to myself, thankfully. I walked past the cutting room and saw it and thought, “Oh, that looks beautiful.” I was still writing the new version, so I used it not just for texting but how he sees things. So when he sees the Pink Lady [in “A Study in Pink”], we see his heads-up display. It’s a gimmicky show, but it’s a good show for gimmicks. It’s a man who can read the whole world at a glance, so seeing words appear makes sense.

VERTUE: It’s a pain for different languages, though, since it takes them forever to take it all off and put it on again.

That’s an interesting point. How much do you think about the international audience when you’re making it?

MOFFAT: Not really at all! “Sherlock” kind of works in exactly one language, and the rest of the world is going, “I don’t get why she had that as her password!” [laughs]

VERTUE: When you’re delivering the program is when you really have to start thinking about, at least, giving them something to work with.

MOFFAT: It’s terrible, but we don’t. What can you say, you’d go mad! What are you gonna say, “Let’s do this one for the Chinese?” They’d love it, but we just let them make what they’ll have of it.

Is the approach with “Doctor Who” slightly different in that respect?

MOFFAT: No, again, I have no idea why either of those shows are huge internationally. They’re the two most British shows you can imagine. I just work under the assumption that if I watch an American show, I want it to be very American, I don’t want it to be made for me, I want it to be properly American. I remember they brought a British character into “The West Wing” and it was terrible, just awful. He was the only bad bit in “The West Wing.” I wonder if [Sorkin] wrote it saying, “Oh, the Brits are liking ‘The West Wing,’ I better put a Brit in here.” No! We don’t talk like that! So I think you make the show for yourself.

Talking about mixing things up, going period [for the “Sherlock” Christmas special] is a big thing for you guys. Is there anything beyond that though? How daunting is that pressure?

MOFFAT: It’s nowhere near as daunting as a show that isn’t doing well. Honestly, I’ve suffered through a show tanking and that’s really pressure, especially making the second series of a show while the first series is tanking. It was reviled around the country as it was held up as an example of the decline of the British nation. We were already making the second series! So when people talk about the pressure of success — bollocks. No pressure, success is lovely and it will end some day and I’ll miss it. I thoroughly enjoy it.

VERTUE: You’ve also got so many stories you can pick at, though. You and Mark get so excited. I sent them to the Criterion restaurant — where [in “A Study in Scarlet,” the first Sherlock Holmes story written by Sir Arthur Conan Doyle] John Watson first met Stamford — and had a creative dinner.

So that’s where all the ideas come from?

MOFFAT: Yeah, it’s me and Mark talking, that little huddle. We just get excited together. Someone asked us a long while ago, “What happens when you and Mark disagree?” and I thought of such a sinister answer. We told him, “We don’t know! It never happens! We never disagree!”

I imagine with a creative partnership like that, if “Sherlock” is the two of you together, there’s no such thing as a “Sherlock” episode where one of you agrees and one of you disagrees about it.

VERTUE: Well, it came from a place where the two of you got excited about what you liked about Sherlock Holmes, anyway.

I’m curious — what is that? What would you define that being?

MOFFAT: Well, Mark and I are terrible geeks, so we love “Doctor Who” and “Sherlock Holmes” and look what happened. Just because it’s great. I don’t think there’s a complicated answer to why we love Sherlock Holmes. He’s the biggest hit in fiction. Who the hell doesn’t like Sherlock Holmes? People who don’t like Sherlock Holmes are the people who haven’t paid attention to it yet. It’s not quite what you think of it and the original stories are so much cleverer and funnier than people realize. It’s brilliant.

There are facets to it, where you could each be drawn to specific aspects of the characters.

MOFFAT: It’s a very good, entertaining portrayal of a clever man. The celebration of his deductions is riveting as a kid when you read that for the first time. Then there’s that lovely, lovely unspoken about the central friendship, between these two men that no one would ever have put together. An ex-army doctor and a lunatic and they’re just the best friends.

VERTUE: And they have adventures and they enjoy it so it’s actually quite uplifting. With detective series, it’s often quite depressing.

MOFFAT: Yes, the “darkness of the human psyche?” Not with Dr. Watson and Sherlock Holmes. They think “Get another case! Let’s go out and catch a bad guy!” They love it.

VERTUE: You wanted to get them laughing, you said they enjoy themselves a lot in the original stories.

MOFFAT: Yes, one of the things people always look at in the show is that he’s a drug-taker or possibly a manic depressive and you look and he laughs in the show, he’s always laughing! He and Watson have huge laughs at things that happen. One guy comes in and tells his whole story, Sherlock Holmes looks at Watson and they both burst out laughing and you don’t always see that, except in ours.

And what could possibly go wrong?

MOFFAT: Pretty much everything we throw at them, but they get back up again and have more fun. They get upset for awhile. But then they say, “Oh well.”

READ MORE: Your TV Is A Lot More International Than You Think (And That’s A Good Thing)

This Article is related to: Television and tagged Christmas, Doctor Who, Sherlock, Steven Moffat, Television