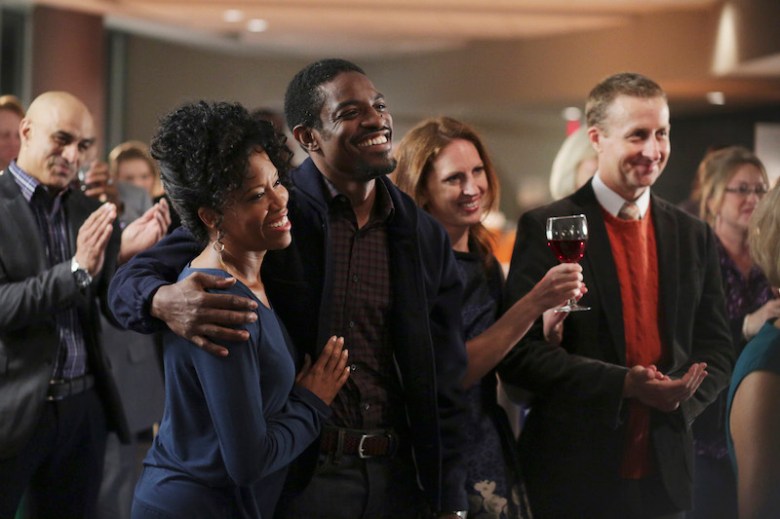 After a first season that presented murder, drugs and racial tension via extremely personal dynamics, “American Crime” is doubling down on its edgy, in-your-face attitude toward entertainment with a new story focusing on rape, adolescence and America’s athletic culture. This isn’t just a risky move because of the taboo material at its center, but also because John Ridley’s anthology series cratered in the ratings after a decent start on ABC. Similar numbers would almost guarantee cancellation, making it easy to argue in support of Season 2’s brave choice to not only stay true to the show’s origins, but intensify the dialogue between the series and its audience.

Yet for as fresh as “American Crime” felt on broadcast television last year, it wasn’t without its flaws. In fact, one could argue its plummeting ratings weren’t because viewers were too lazy or uneasy to engage in such vital debate, but because the boorish nature of how that discourse was presented became too unyielding to be tolerable. Everything that could go wrong did go wrong, and there was no question as to whether or not it would. In Season 2, Ridley seems to be taking it a step further. Not only does the plight of a young boy, a basketball team and a private school start bad and get worse, but things fall apart because everyone involved consistently chooses to do what’s wrong instead of what’s right.

READ MORE: How To Talk About Racism on Television: ‘American Crime’ Makes Its Case 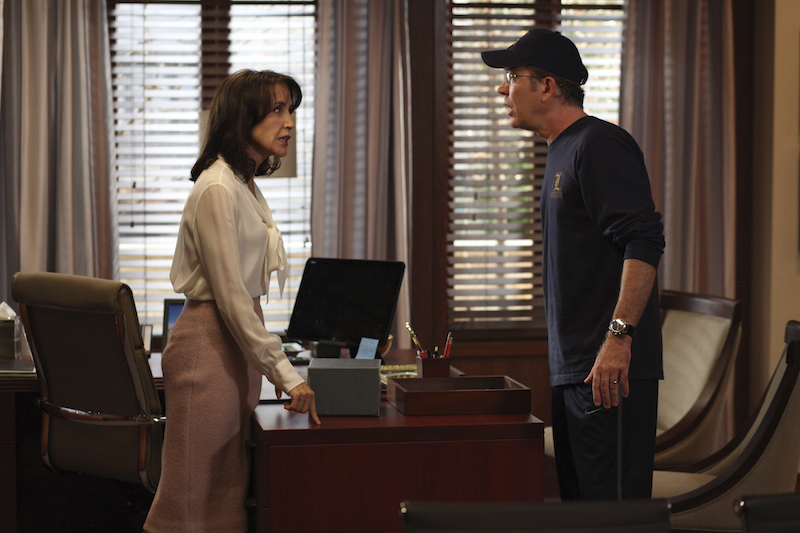 Season 2 sets its story in the suburbs of Chicago, at an elite private school with a basketball team poised to send many of its members to college. But when lurid pictures of a student surface after the non-athlete attended a party thrown by the basketball team, everyone’s future becomes more and more uncertain as darker and darker truths come out. A mother working two jobs (Lily Collins) tries to protect her son from an administration aiming to protect its reputation. The son tries to protect his girlfriend (and himself) from learning exactly what happened at that party. The girlfriend tries to protect her family from any trouble associated with her talking to police. A coach (Timothy Hutton) tries to protect his players even as evidence mounts against them. The players try to protect each other even as their parents only look to protect their own. No one is clean, and, eventually, the snake starts to eat its own tail.

It’s easy to get caught up in the descriptive drama of “American Crime,” especially when so much of this season is built around gossip spread via social media and locker room chatter. Watching weekly may not have the same effect as bingeing four episodes in a row — as was the chosen method for review — but, at first, I found myself eagerly clicking “play” on each installment in part because of the sheer desire to learn what exactly happened to this unfortunate kid. In short, “American Crime” had me after its first hour. It showed restraint in painting certain characters as representative of this group or that group, even if the warning signs indicated such control could be lost in the coming episodes. But how Ridley’s camera connected the physicality demanded of high school athletes on the court with what they’re ordered not to do off the court — raging hormones be damned — showed how powerful subtlety could be for a story so packed full of touchy topics that the slightest tap could set off a debilitating explosion. 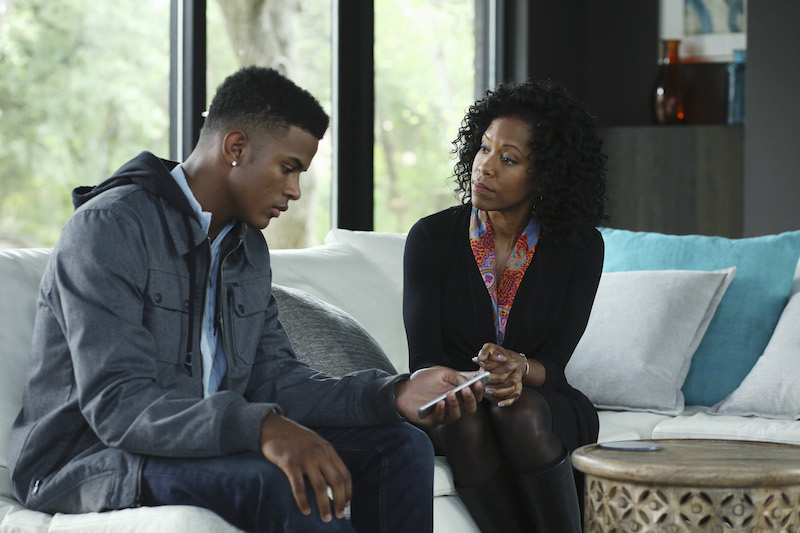 That tap came in the form of a $900 bracelet in Episode 2, and all the artistic reserve was blown away. It wasn’t so much that form and function changed in that moment. It was simply the straw that broke the camel’s back. In a scene that, in this description, is in no way a spoiler, Regina King’s overly-aggressive, overly-sensitive and overly-protective mother, Terri Lacroix, yells at her son for buying his girlfriend a $900 bracelet. But she’s not upset that he used a credit card his parents pay for on an extravagant gift. She’s upset about who he used it on — a poor person. Because poor people can’t afford nice things, and thus cannot possibly have the right intentions toward her son when they appreciate a gift they did not ask for or even expect.

It’s not so much the blatant nastiness of the scene itself that’s so striking — though its overly direct depiction of anger fueled by obvious subtext drew to mind Sandra Bullock’s character from “Crash.” It’s the delicacy with which the following scene is handled that provides such a stark contrast of what “American Crime” is and what it could have been. We watch as the two teenagers stare at each other silently, the young woman who’s clearly just heard the demand and the boy who is ashamed to be carrying out his parent’s wishes. She hands him the bracelet. He takes it, reaches for her and is pushed away. She roughly slaps him, tears pouring down her face.

Both scenes convey decisions; decisions made and decisions being executed. It’s ironic, then, that this example of execution represents what’s good about the show while the series’ overall execution is what ruins it. Even if some moments ring true, too many deafening blows make the show’s only impact comparable to blunt force trauma. “American Crime” has never met a bad choice it can’t find a way to justify, and worse yet, it uses the worst moments as hooks to lure viewers to the next episode. As you keep going down the road, things get nastier and nastier. Only unlike Season 1, it’s the people who are rotten this time. 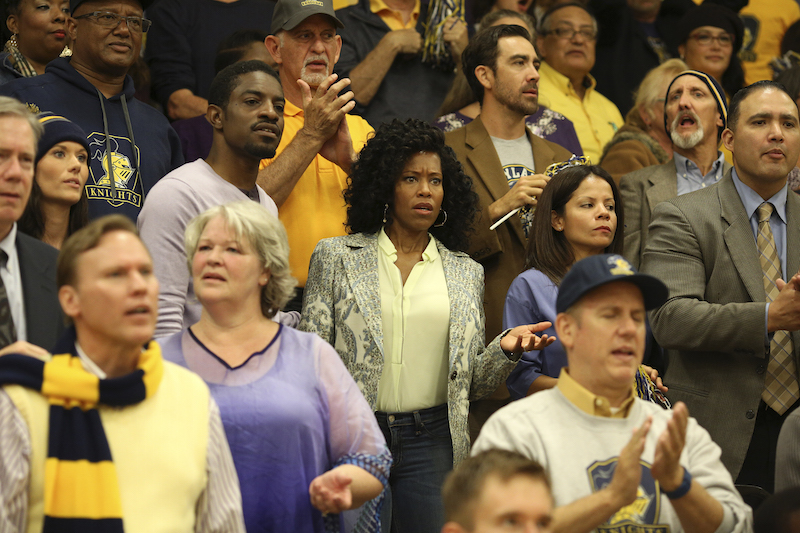 Whereas in Season 1 we saw a system failing its citizens — like when a largely innocent kid is sent to juvey because he can’t afford reasonable bail, or why hate crimes are only prosecuted when the majority attacks a minority — here we’re seeing people fail each other. Huffman, returning to the series as another woman with questionable morals, is the face of a for-profit private school looking to avoid losing funding due to the actions of its students. But we don’t see her struggling with the conflicts inherent with her position. We watch as she goes out of her way to manipulate victims and smear the innocent, all without making us understand why she’d do it outside of money. Andre Benjamin, as a husband overrun by his bossy wife, turns up his nose at another parent pleading for help. It wouldn’t have hurt him to offer a kind word, but that’s not how things are done in this world. Finally, at the core of the story, a mother doesn’t listen to her son. Time and again, she pushes forward with a reckless agenda that at first is understandable, but soon turns bewildering. Are we meant to believe she was denied help so many times she lost the reason why she was asking for it? Is that why she went against the wishes of her son or acted without speaking to him? Is she simply a bad mother?

No matter the answers, all of these questions are not intentional. “American Crime” is hellbent on starting a discussion, but not on these points. It wants us to treat these people as if they’re real and symbolic at the same time. It wants us to believe that even if all these very specific scenarios aren’t likely to come together to form such a major shitstorm, they still could. It wants us to approach the episode-ending twists like devastating bits of reality, not conveniently-released secrets unleashed to hook viewers like a 10-second tease for the nightly news. It wants us to believe the worst isn’t just possible, but it’s happening and the government, justice system and American people aren’t doing anything about it.

What it doesn’t account for is the rejection of this premise. That even when times are bad and change is needed, it’s not fear that will bring about reform but empathy. If Season 2 ends in a similar fashion to Season 1 — and that’s where it seems to be heading — “American Crime” will again remind viewers that there is no justice. There is no way to win. There is no happy ending, or at least, you shouldn’t count on it. Whether or not you believe that is up to you, but I’d be hard-pressed to see how exemplifying the worst of society is meant to better it.