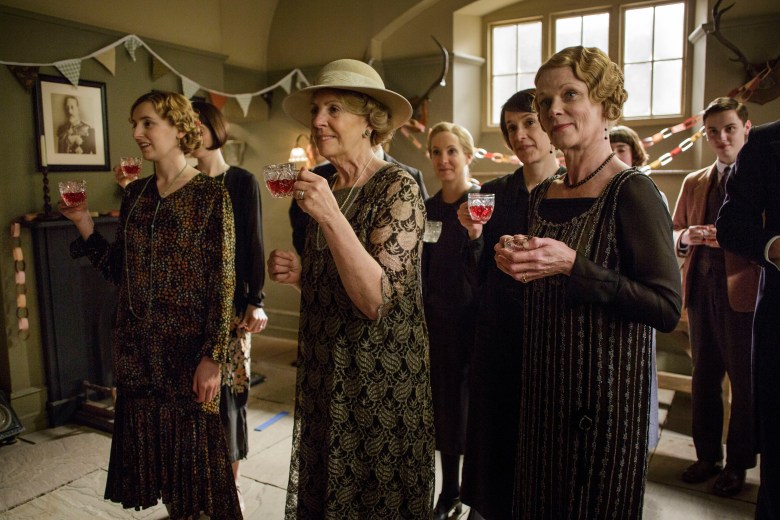 Yep, they’re still arguing about the hospital takeover. Nope, there doesn’t seem to be any end in sight. Violet enlists Lady Shackleton (Dame Harriet Walter, taking a break from bandaging Chewbacca) to bolster her side, so Cora and Isobel invite Rosamund up from London to even the numbers. On the way up from London, Rosamund tells Edith about the women’s college where she serves as trustee, and that she’s invited Mr. Harding the treasurer to lunch at Downton. At first, this seems like another attempted set-up for Edith, but soon we learn that there is already a Mrs. Harding. When they arrive at Downton for dinner, the sniping about the hospital gets so heated that it gives Robert indigestion. In fact, Robert grabs his stomach three separate times over the course of the episode. Foreshadowing much?

Baxter’s past transgressions resurface when Sergeant Willis informs her they’ve arrested Mr. Coyle, the man who induced her to steal from their former employer and left Baxter to take the fall. Coyle has been repeating this pattern and leaving a trail or ruined women in his wake, but he’s finally been caught and will be going to trial. Sergeant Willis wants Baxter to testify against him, but she’s terrified of facing him. Molesley implores her to step forward, for the sake of the potential victims should he go free, and Baxter cautiously agrees to testify.

The Hardings arrive at Downton for lunch, and Mrs. Harding turns out to be former housemaid Gwen (Rose Leslie). At first, nobody from upstairs recognizes her – though Mary has an inkling – and Gwen, stunned to be back under such different circumstances, is too tongue-tied to tell them. Of course, the downstairs stairs staff recognize her right away – Anna is overjoyed to see her, while Barrow is coolly suspicious of her rise in class. Tom, having lived in both worlds, warmly greets her but doesn’t spill the beans, though Mary sees the way Tom is immediately chummy with Gwen and knows something is amiss. And when Barrow outs Gwen’s true identity, the Crawleys are shocked and embarrassed that they didn’t even recognize her.

Gwen has only warm memories of her time at Downton, and shares with them the story of how she was able to leave service and make her way in the world – all due to the late Lady Sybil’s repeated help. While she tells them the events of several Season 1 Sybil/Gwen plots that nobody else in the house was aware of, the memory of the departed Crawley sister seems to inhabit the room. The question “What Would Sybil Do?” animates the rest of the episode, affecting several different storylines. 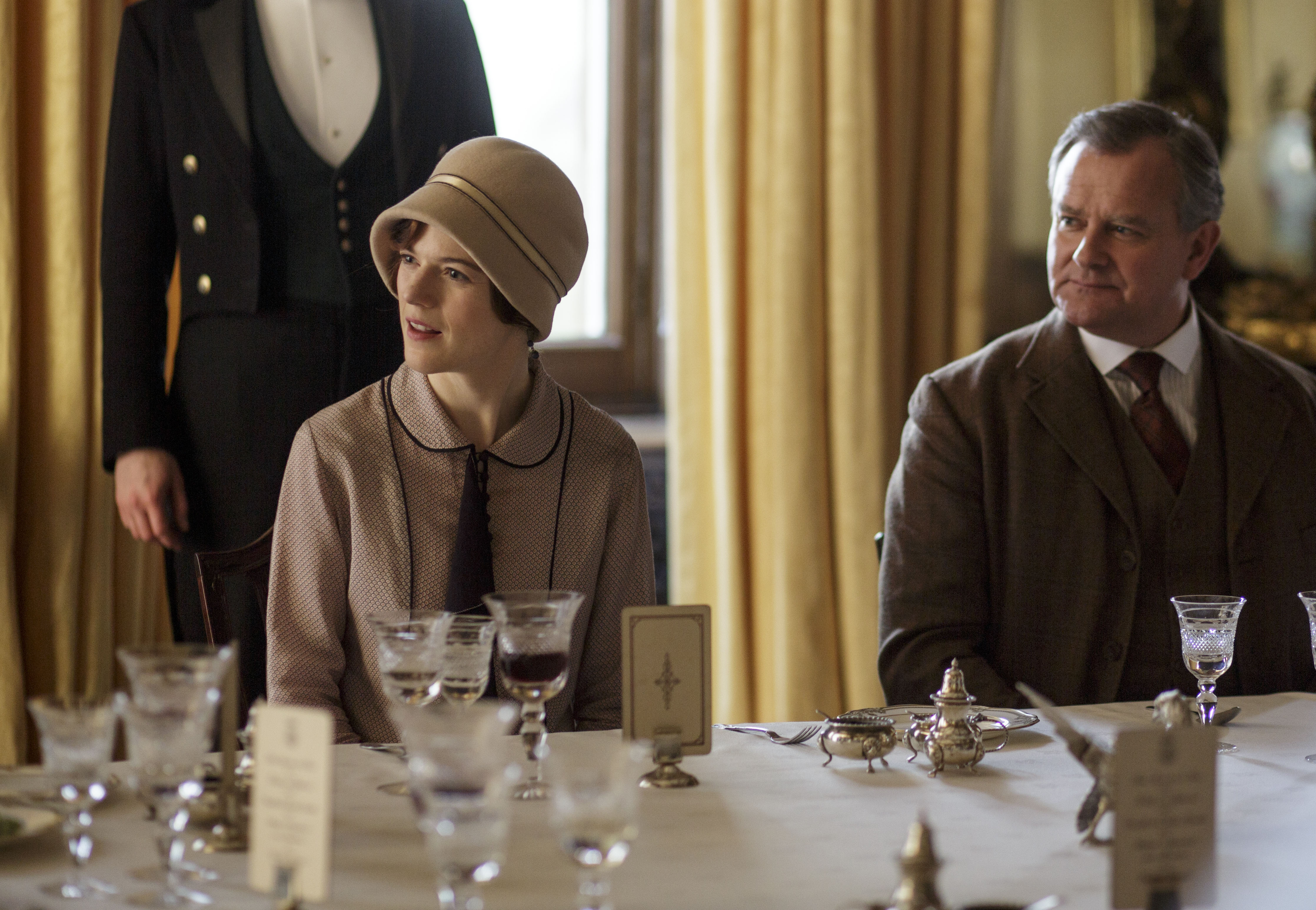 Lady Mary’s Nethers: Everybody Has An Opinion

Lady Shackleton is accompanied to dinner by her nephew, who turns out to be car racer Henry Talbot (Matthew Goode), who we first met in the Season 5 finale. Mary and Henry have crackling chemistry (although if you watched him Finn Polmar-ing it up on The Good Wife, this is not a surprise), and Henry and Tom have really good chemistry too, although I doubt the Crawleys will get that progressive. Mary and Henry flirt through dinner and it’s obvious there’s more to come. Much to Robert’s horror, Violet and Lady Shackleton immediately begin discussing what a marriage between the two would mean. But the topic of marriages and prospects are a clear subtext in every interaction between them, and much of Mary’s reserve seems motivated by evading the open question of who she’ll marry next. It doesn’t stop them from going on an innuendo-laden date in London.

The memories of Sybil hit Mary harder than anyone else in the house, and she wonders aloud if she’s not a horrible person. (Perhaps not taking every opportunity to insult Edith would be a start.) But then Anna has a sharp abdominal pain and fears she’s about to miscarry again and Lady Mary leaps into action, devising a plan for them to go to London immediately, and enlisting Tom’s help to keep the true reason secret from everyone else. Bates can tell something is up but he doesn’t press the issue, because, well, I don’t really know why other than Bates doesn’t really seem to have much of a character anymore. They get to London just in time for the doctor to save the baby and perform the procedure that could mean a healthy pregnancy. When they return to Downton, Anna finally tells Bates the good news. Maybe they’ve finally suffered enough.

This is another great episode for Michelle Dockery, who endows Lady Mary with great reservoirs of kindness beneath a layer of steel, and equal helpings of ego and self-doubt. She also seems to be making some specific vocal choices to echo Maggie Smith, letting us know that there will always be a strong-willed Crawley matriarch to run the show.

It’s honeymoon time for Carson and Hughes, and everybody frets about having to call Mrs. Hughes “Mrs. Carson.” While they’re away Barrow is serving as the butler, a fact that he enjoys reminding the other servants frequently. (A tip, Thomas – if you have to keep reminding people of your authority, then you don’t really have any.) But the temporary power grab doesn’t give Barrow the happiness he hoped it would, and he takes a moment with Baxter to confess that in spite of appearances, he actually cares very much what people think about him. When Bates confronts him over outing Gwen and accuses him of being jealous of her success, Barrow’s rage begins to seep through his icy front. Piling on, Robert scolds him for his “lack of generosity” towards Gwen.

Carson returns and everyone is relieved that the house will get “back to normal” – especially since they’re going to be able to keep using the name Mrs. Hughes after all. Robert hopes that Barrow has learned something about the value of kindness that will serve him well… and he stop just short of saying “when we toss your ass out the door.” But Barrow knows exactly what Robert means, and it’s clear that he’s close to cracking. Bad for him, but good for the show – a desperate Barrow is a always reliable source of pathos, and Rob James-Collier suffers quite prettily. 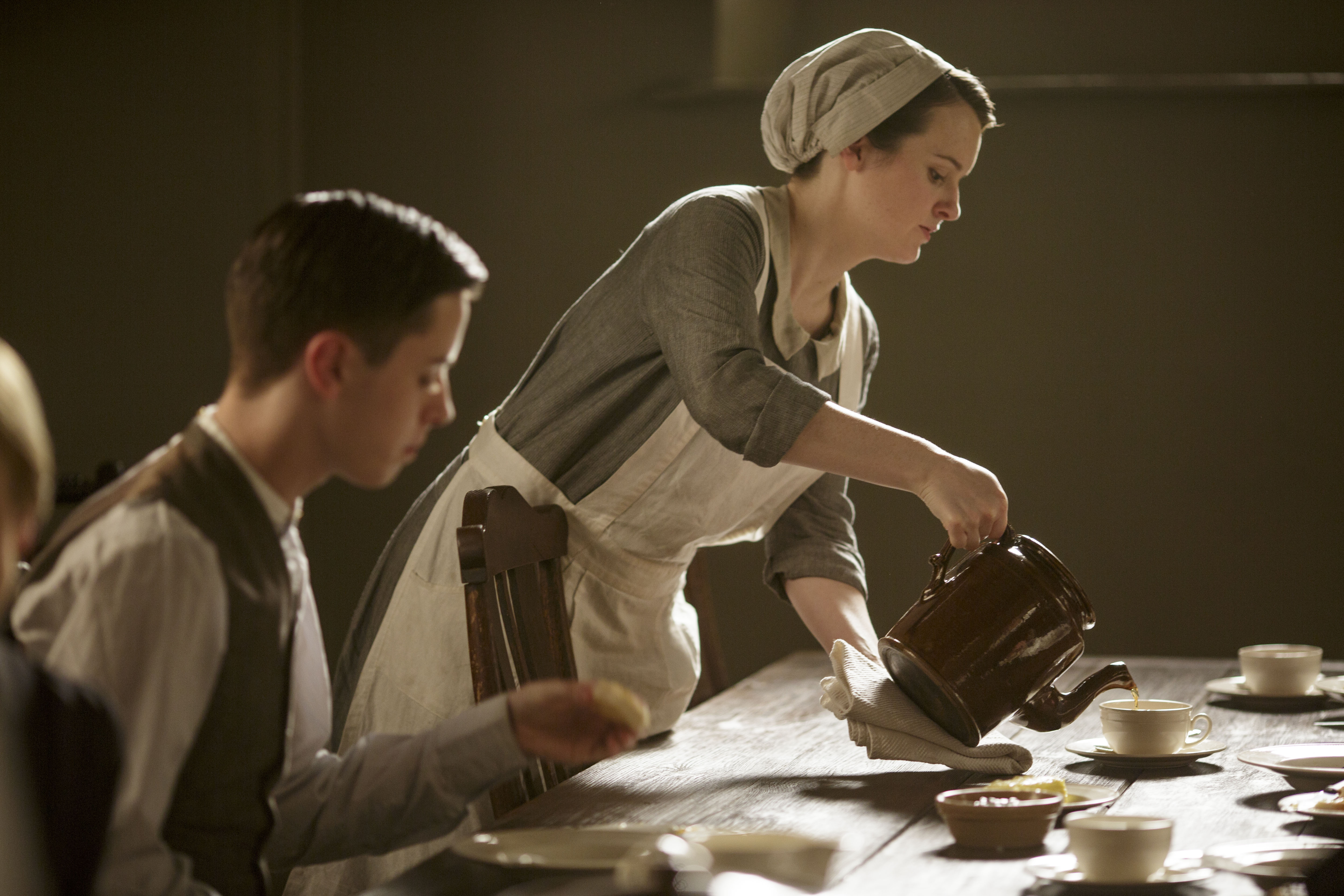 Daisy gets more and more agitated with the thought that Cora has reneged on some ill-defined promise to give Yew Tree Farm to Mr. Mason. Mrs. Patmore calls her “Madame Defarge” and “Karl Marx,” but the barbs only makes Daisy more desperate and furious. She corners Tom to remind him that poor William Mason died in the war defending them all, and that they owe his father. Tom, having just listened to Gwen’s stories about Sybil, says he’ll “have a word.” But that’s not enough for Our Daisy, who finally decides she’s going to have it out with Cora – even if it costs her her job and her livelihood. All the other servants try to talk her out of it, but Daisy seems to have been listening to the “Hamilton” soundtrack, so eager is she to Rise Up.

Of course while the revolt is brewing downstairs, Cora is actually in the process of trying to convince the rest of the family to give the farm to Mr. Mason. Robert is wishy-washy as always. Mary is the main holdout, but she’s off in London. Again, the ghost of Sybil looms large, and they resolve to let Mason have the place. Tom promises to smooth it over with Mary. The matter decided, Cora goes off to bed – only to find an enraged Daisy waiting in the hall and ready to do battle. But before Daisy can pop off, Robert arrives and in his usual splendid obliviousness, he assumes Cora called Daisy up to tell him that they’ll let Mr. Mason take over the farm. Daisy goes into shock from the emotional whiplash, and retreats downstairs without setting off the revolution. Later on, while Daisy tries to make sense of what happened, footman Andy goes on about much he loves country life. Daisy looks at him, and it’s as if she’s seeing him for the first time. How many episodes do we have left to pair them off?