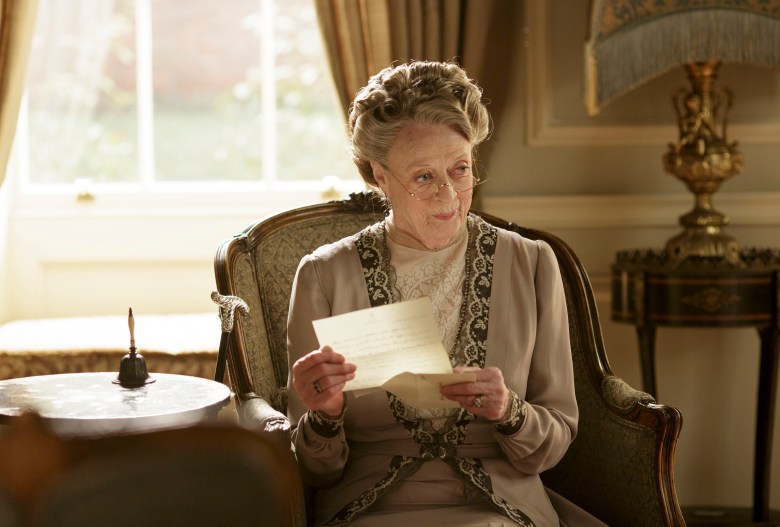 Just like last week, the crux of this episode takes place around the dining table. Violet pulls out all the stops to thwart the hospital takeover, especially when Dr. Clarkson defects to the opposing camp. She invites (read: blackmails) the Minister of Health to come to dinner where she can make her case, and the Minister turns out to be future Hitler-appeaser Neville Chamberlain who, in a blunt piece of historical characterization, shrinks away from every possible confrontation. When asked if he enjoys a good fight, Chamberlain literally says, “I’m not sure I do.” Subtle.

It’s Baxter’s day in court to testify against her old abuser Mr. Coyle, and Molesley goes with her because that’s what Molesley does. And once again, the show lets a character off the hook, by having Coyle change his plea off-camera. Baxter won’t have to testify after all, and even the show itself comments on the anti-climax of it all.

Meanwhile, Mrs. Hughes’s attempt to cook dinner for Carson fails to live up to his exacting expectations, and he asks Mrs. Patmore to give his new wife a refresher on how to cook. Oh, that’s not going to end well for him.

Henry Talbot invites Mary to watch him test drive a new racing car. Tom joins them, partly to ogle the cars and partly to keep shoving the two of them together. Conflicted Mary has a hard time allowing herself to enjoy the day, since it keeps reminding her of how Matthew died. As Mary and Henry dance around each other, Tom mocks them for making up flimsy excuses to see each other. Yeah, Tom ships it.

Edith hires a new editor for her magazine, and spends the day with Bertie. Despite the family’s teasing, she insists it’s not a date. Riiiight. Edith confides to him that she’s considering a move to London to make a life for herself away from Mary’s shadow (or maybe she could go overseas and have her own adventures). Bertie’s position is similar, but he doesn’t feel eclipsed by his cousin the Marquess of Hexham, who spends most of his time in Tangier (code for “he’s gay”) and leaves Bertie to manage the estate. After Edith invites him back to her flat for a drink – how bold! – they share their first kiss. They’re adorable together, but let’s face facts: this is Edith we’re talking about, so something is bound to go horribly wrong.

And you thought the whole Yew Tree Farm plot was over. On the day Mason moves in, Mrs. Patmore and Daisy bring him a picnic lunch. Footman Andy declares his intent to tag along, because this show never gets tired of having characters loudly declare that they’ll go with someone somewhere that they haven’t been invited. Though raised in the city, Andy is enamored with the pastoral life – so much so that when Mary worries that Mason might be too old to raise pigs on his own, Andy announces that he’s volunteered to help. This is a total lie, but Andy insists he really does want to learn how to become a farmer.

Daisy should be thrilled, but instead the whole day unsettles her. It’s as if Mason was a problem for her to fix, and not a real person; now that she sees him interacting with other people in her life, she’s not sure she likes it. Her ambivalence is only heightened when Mason asks her to make the farm her home.

Barrow makes another friendly overture to join Andy on a trip into town and is yet again rebuffed. Bates and Anna are oddly supportive of Barrow, and when they press Andy about why he’s avoiding the under-butler, he replies that he doesn’t want to give him “any wrong ideas.” C’mon Andy, it’s not like he asked you to go to Tangier.

But when Mason lends Andy some books on farming, Barrow quickly figures out that the footman doesn’t know how to read. With no ulterior motive, Barrow offers to teach him. Andy is ashamed of his illiteracy and doesn’t want anybody else to know, so Barrow suggests they meet in his room where nobody see. I don’t think this arrangement is going to lead to any kind of misunderstanding down the line, do you?

Violet’s ire towards Dr. Clarkson’s change of allegiance inspires Denker to a fit of rage at such “treason.” Passing by the doctor in the village, she takes it upon herself to try her own Dowager Countess routine, chastising him for his disloyalty. Denker’s smug satisfaction is short-lived; when Violet finds out about her stunning impropriety, she channels Emily Gilmore and fires the maid. Spratt gloats over this turn of events, at least until Denker threatens to expose his aid to his fugitive nephew if he doesn’t ask her Ladyship to reconsider. He makes sure to draw out the process so as to maximize Denker’s agony. After toying with her for a bit, Spratt reveals that he convinced Violet to give her another chance. But what could be the beginning of a new harmony in the house takes about two seconds to dissolve, as Denker makes it clear that she’ll continue to hold the secret of Spratt’s nephew over his head anytime she feels like it. Poor Spratt – he was so close to escaping her influence.

The Season 5 finale introduced both Henry and Bertie, and set up their roles for this year. Now something else we first met in that episode returns to play a major role: Robert’s stomach ulcer. I’ve lost count, but I believe he’s clutched at his stomach something like fifty-three times in past few episodes. Which means we should all have been expecting something bad. But I don’t think anybody quite expected “Downton Abbey” to take the “John-Hurt-in-Alien” route.

As the Chamberlain dinner dissolves into another round of verbal warfare over the fate of the hospital, Robert stands up unsteadily, apologizes, and proceeds to VOMIT GOUTS OF BLOOD ALL OVER THE TABLE. It’s a shocking moment; death has been creeping around the edges of this whole episode, with the specter of World War Two that arrives with Chamberlain, Mary’s memories of Matthew’s death-by-auto and Tom’s wistful description of his marriage to Sybil. Now it erupts out of Robert’s burst ulcer, splatters all over Cora and forces everybody to confront the inevitability of change. Robert is rushed to the hospital – in York of course, without any objection from Violet. The show could have taken this chance to kill him off, but they choose to spare Robert for another day; maybe instead they’ll finally kill this interminable hospital plot.

Even though his surgery is deemed successful, the event sends shockwaves through the house. Mary and Tom agree that they’ll now have to run the estate themselves. Carson is shaken to the core and Barrow is surprised to discover he actually cares. And in the chaos, Mary overhears something that finally arouses her suspicions about Marigold. When she quizzes Anna on what the servants are saying, Anna can barely choke out a feeble denial. Mary doesn’t press, but now that she’s firmly in control of Downton you can bet she won’t let it go.