Sundance: Amy Seimetz Explains the Most Feminist Decision She Made When Crafting 'The Girlfriend Experience' 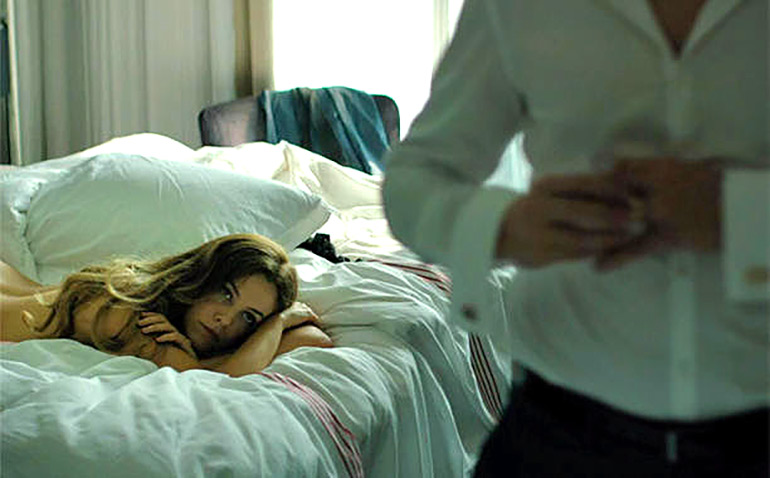 Steven Soderbergh’s latest foray into television draws from a familiar source: His 2009 feature “The Girlfriend Experience.” Soderbergh serves as executive producer on the show, which has been worked into an anthology series by filmmakers Amy Seimetz and Lodge Kerrigan, who are credited with co-writing all of the first season’s episodes and splitting up directorial duties on each episode (Seimetz also appears in the show as the lead character’s sister).

The new Starz show focuses on Christine Reade (played with serious grace by Riley Keough), a law student who unexpectedly gets involved with the world of high class escorting, as inspired by her often wild (and very unpredictable) school pal Avery (Kate Lyn Sheil). As Christine tries to juggle school, an important new internship and her ever-growing stable of clients, the show pushes forward to illuminate the pressures of her unique life in intriguing detail, and the series is deservedly one of the most anticipated of the spring season (read: it’s really, really good). The series will debut on Starz in April, but the network brought the first four episodes of it to the Sundance Film Festival this week, where it likely ensnared a pretty healthy new audience, all eager to see where the show goes as it winds on through its first season.

Seimetz sat down with Indiewire at the festival to talk about the unexpected way she came to direct the show, if it has a feminist message and the one thing that really surprised her about meeting actual escorts.

How did you come to this project?

I want to stress [that] this story is usually not how television is made, just because I don’t want people standing by their phones waiting for Steven Soderbergh to call. I was doing “The Killing,” and Steven called me up randomly. He had seen “Sun Don’t Shine,” a film I had made, and he also knew Shane Carruth, my fiancé, and I had been in [Carruth’s film] “Upstream Color.”

Shane got him my number and he called me and asked if I wanted to direct a television show. I said, “Yeah, sure,” but people say shit all the time. The only reason I knew he knew who I was because he did that “State of Independent Film” address and mentioned my name. Then I said, “I’ve never directed television, so I don’t know what I’m doing.” He said, “Well, you gotta start somewhere.” Which is true, and it’s not very much different [than directing movies].

He mentioned he knew Lodge [Lodge Kerrigan, co-director], he had produced a few of Lodge’s movies, and we would be working together, and strangely, I had just worked with Lodge on “The Killing.” I said, “What are we going to do next?” Then he said we were going to meet a bunch of escorts, or providers, and interview them and spitball what we want this to look like. That was the beginning. He said he wanted to pick one male auteur and female auteur with a singular vision on both ends to mash them up and make something inspired by “The Girlfriend Experience.”

It’s interesting that it’s not essential for viewers of the show to have seen Soderbergh’s original film.

It is an anthology. When we do Season 2, it will be another woman. I do consider the movie to be the impetus, or a great companion piece, because it explores the lives of all these women or men in this world.

Because it’s such a hot topic, people go insane when you say “exchange money for sex.” People either go, “Cool, that’s so hot” or they get really angry and we’re all gonna burn in Hell. The women and men who decide to do this are so fascinating, because they basically broke some social code, and that’s always an interesting character.

What surprised you about meeting actual providers?

The thing that was most striking, and what’s so funny because I’m a woman and I’m trying not to be judgmental, but the women were so normal. You wouldn’t be able to pick them out of a crowd and say, “That’s an escort.” There are some women who do this sort of thing and have the stereotypical build of what we would think of as a porn star. But for this particular thing, “the girlfriend experience,” these women who provide a more emotionally-based relationships to men. They just look totally normal, which I think is part of the appeal for men.

It maintains the illusion.

In addition to that, one of the things that I didn’t really think about before, is sex work isn’t something you sit around and think about for years and years and then maybe go try. You don’t sit and try and convince yourself you’re the type of person to do this. All of the women, across the board, when they decided to do it, they just did it. They have the personality of “I decided I wanted to try out escorting, so I called an agency and got a date the very next day.” It’s very unapologetic, there’s no fear. It’s really interesting, because I don’t have that, it’s not part of my fabric, but I found that to be really interesting. It’s a fearlessness.

In the show, you see that attitude with Christine. You see her moving towards it with none of this angst, it just becomes part of her life.

We’re more interested in her character than the actual sex work. It’s more interesting to explore her and what the hell is she thinking and watch her decisions. Both Lodge and I agreed we didn’t want a character who was constantly telling you why she was doing things and expressing all these feelings, because we’ve seen enough of that for women. We wanted an action-driven woman. All of her emotions are shown to you, the audience, through action.

Do you think the show has a feminist message?

People define feminism in so many different ways. I think the most feminist thing I’ve could have done was approach it the way I did, and treat her like a human being. Like, “You’re complicated, you like sex, so what?” We all fucking like sex. I’m so tired of that shit, “Oh, a woman that likes sex, oh, my God, it’s an anomaly.” I don’t ever see a woman who is so frank, “I like sex, next question.” It’s a part of her, the same way that all of these things that she’s doing are a part of her. We just don’t see women who are allowed to be complicated and unapologetic.

About the feminist thing, I’m not quite sure how to answer that. Feminism has now become this thing, it’s become like the word “organic.” It sounds really good, I want to be that, but I don’t know where it applies. There’s so many different points of view.

Some people still seem stuck on the idea that it’s all just man-haters.

Then there’s Gloria Steineim, and so many different points of view of like, sexual liberation and supporting women. For me, it’s presenting the idea that women do have existential crises, they are extremely complicated, whether you’re a mom or a girlfriend or a wife, you are going through all of the emotions men are going through. Hopefully, presenting that in narrative is one step closer.

The show is focused on Christine, but in the early episodes, we get so much insight into her relationship with Avery. Was putting that relationship on screen important to you from the start?

Kate [Lyn Sheil] is so good. I was so excited to make Kate into Avery. To give Kate credit, the first time I met her, I thought, “Nobody is using her right, she has so much potential.” Not to say that that I’ve discovered her potential, she discovered it herself. But they weren’t allowing her to unleash how wild she is. Then when she did that, people went, “Okay, Kate, play crazy again,” but there are so many fun forms of crazy that I couldn’t wait to channel them into Avery, like this loose cannon. She makes every character so believable.

That casting could have been so cheesy, but Avery is one of my favorite characters. She is so unpredictable. She lives for the moment. Both of them are so young and millennial. It is hard for them to think five years ahead, which is hard for me too. They are living for the moment. Christine is good at compartmentalizing and planning really well, but it’s really hard to maintain that, because this is not a profession that is sustainable. Sure, go do it, but it takes a lot out of your mind and body. 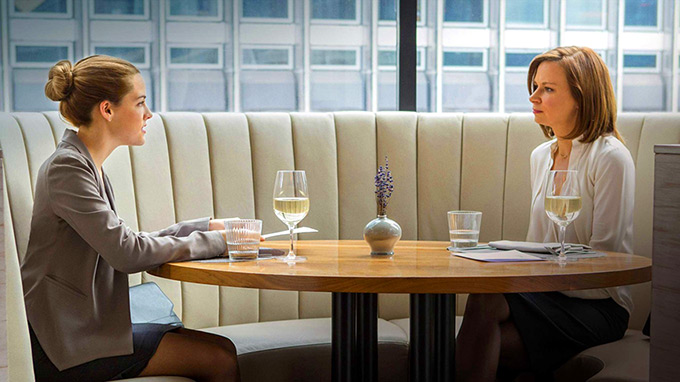 The show has a very polished and very simple look, from Christine’s wardrobe to the sets. Why was that important to build out?

We had great people. Half of directing is finding exactly the right people and not overexplaining everything. Caroline Eselin, who I worked with on “Family Tree,” I love her and her aesthetic, which is simple and natural and real. She does these subtle things to show characters without beating you over the head.

We also had Aidan, our production designer, his design and taste are so perfect. He created this controlled atmosphere that was high-end and sterile with not a lot of color. Every time I go to places that I can’t afford, I’m struck by how austere and plain with really clean lines [they are], like, “Look how perfect we are, we don’t need to decorate.” That was  the idea behind these interiors. Both Aiden and Caroline understood that, plus our DPs. They just get it.

Since this is an anthology series, will you and Lodge stay on for the next season?

We don’t know yet. I mean, yes, I believe so, but creatively we have to figure that out. I wouldn’t want to direct more than another season. Not just for me personally and creatively, but what’s so cool about this show is this topic and seeing different takes on it. I’m going to run out of ideas of how to make escorting really interesting, that’s just the truth. I’d rather see a fresh take.

“The Girlfriend Experience” premiered this week at the Sundance Film Festival. It premieres Sunday, April 10 on Starz, with all 13 half-hour episodes available for viewing via VOD or Starz Play.

READ MORE: Steven Soderbergh Takes You Inside ‘The Girlfriend Experience’ on Starz